As a transitional month of year, April takes us to the end of Vietnam’s very peak season from a weather perspective. There are still different climates across the various terrains of the country. You can expect a lot of dry days in the North although this part is now heading to its hot, wet summer. The beaches in the Central are still at their very best for swimming and other water-based activities while the South’s temperatures and humidity begin to rise, which give way to occasional rains. This article will help you know more about Vietnam weather in April as well as other interesting information.

1. Weather of Vietnam in April. 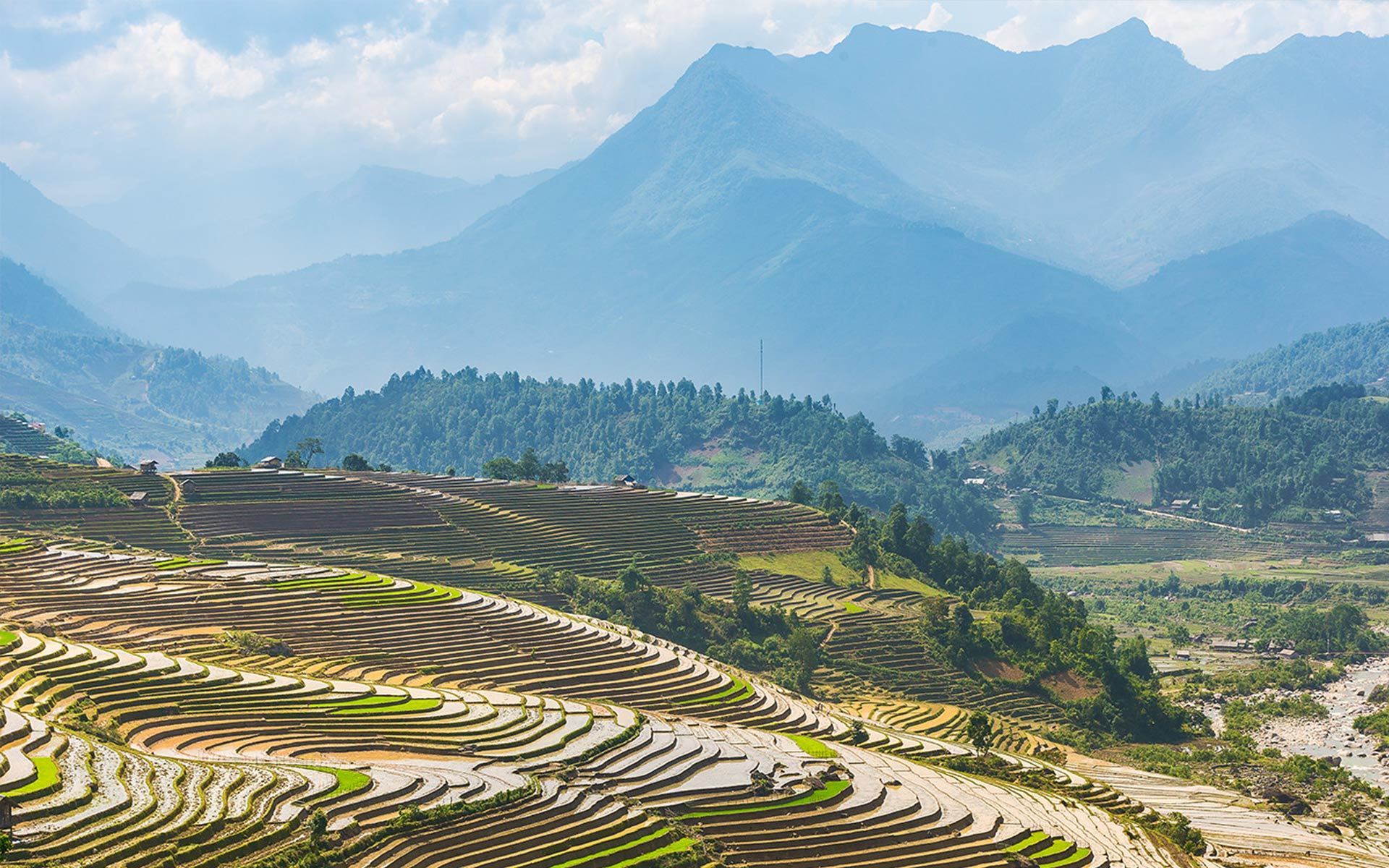 Heading towards the hot, wet summer months, the temperature in the North continues to rise, and expect a little rainfall, especially near the end of the month. The far northern mountains such as Sapa, Ha Giang, Mu Cang Chai… still hangs on to its ideal temperatures and dry weather which continue to make good trekking conditions. The average temperature of the region is at around 24oC. 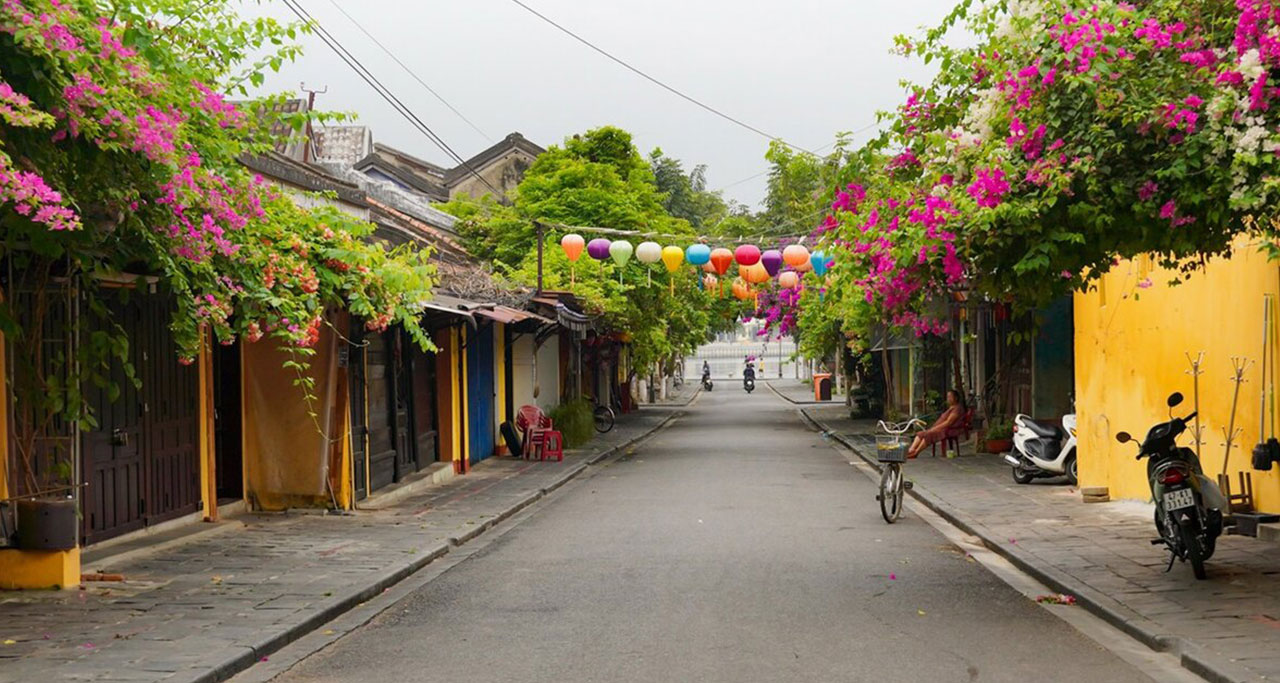 How to say? April brings sunshine and blue skies for the Centre of Vietnam with an average temperature at 28oC and mostly non-existant rainfall. The areas from Danang to Nha Trang still mark as one of the best summer beach destinations.  Hue in further north is enjoying good weather, likewise to the west in Dalat and the Central Highlands. 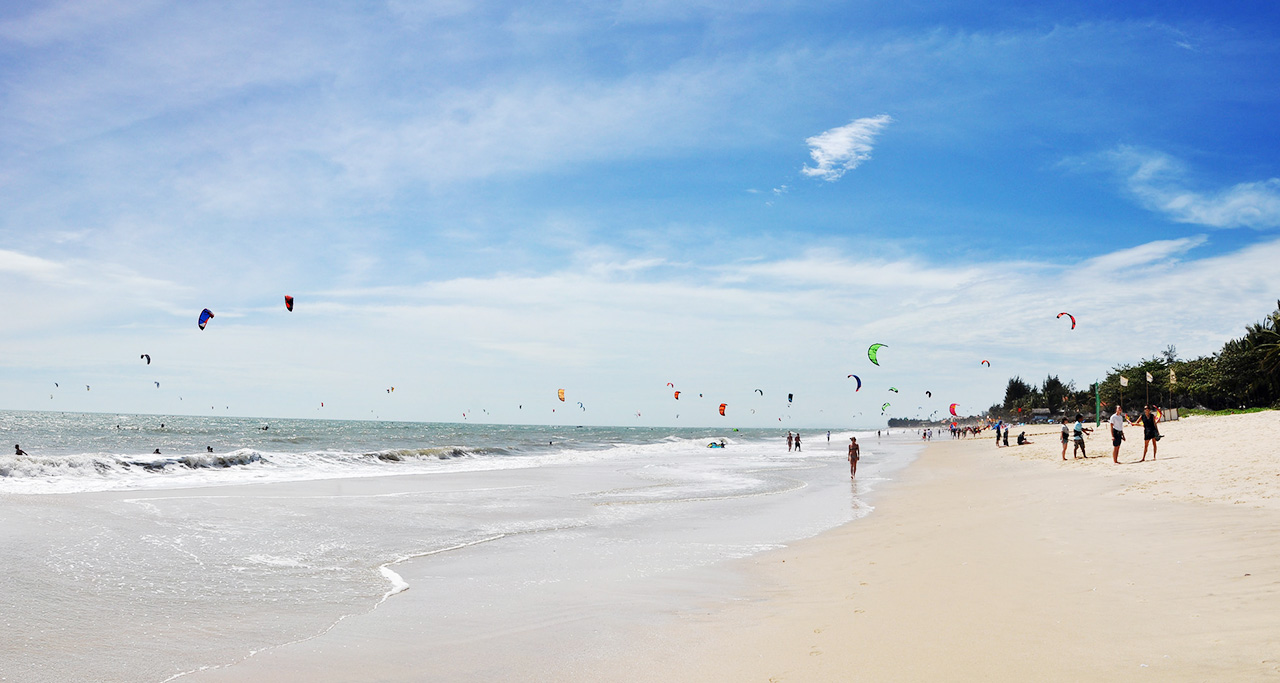 The South in April is certainly hot with an average temperature over 30°C and the chance of rain constantly increases but perfectly calm the heat down. Although the occasional rain may pass through, the region’s beach destinations, such as Phu Quoc, Con Dao, Phan Thiet & Mui Ne, still remain amongst the best of Vietnam’s beach choices.

As summer approaches, temperatures in the North are rising but it’s still very pleasant and great for hiking. Therefore, don’t miss perfect places for hiking such mountain regions as Ha Giang, Mu Cang Chai, and Sapa.

This is a perfect time to visit Hanoi – Vietnam’s capital, including Ho Chi Minh’s Mausoleum, the iconic One-Pillar Pagoda shaped like a lotus blossom, the colonial Old Quarter, a show at the Water Puppet Theater and more. Then head to Halong Bay – UNESCO Heritage Site, when the haze of earlier months typically gives way to clear blue skies perfect for photography as well as the rising of the sea temperature will be warm enough for swimming. 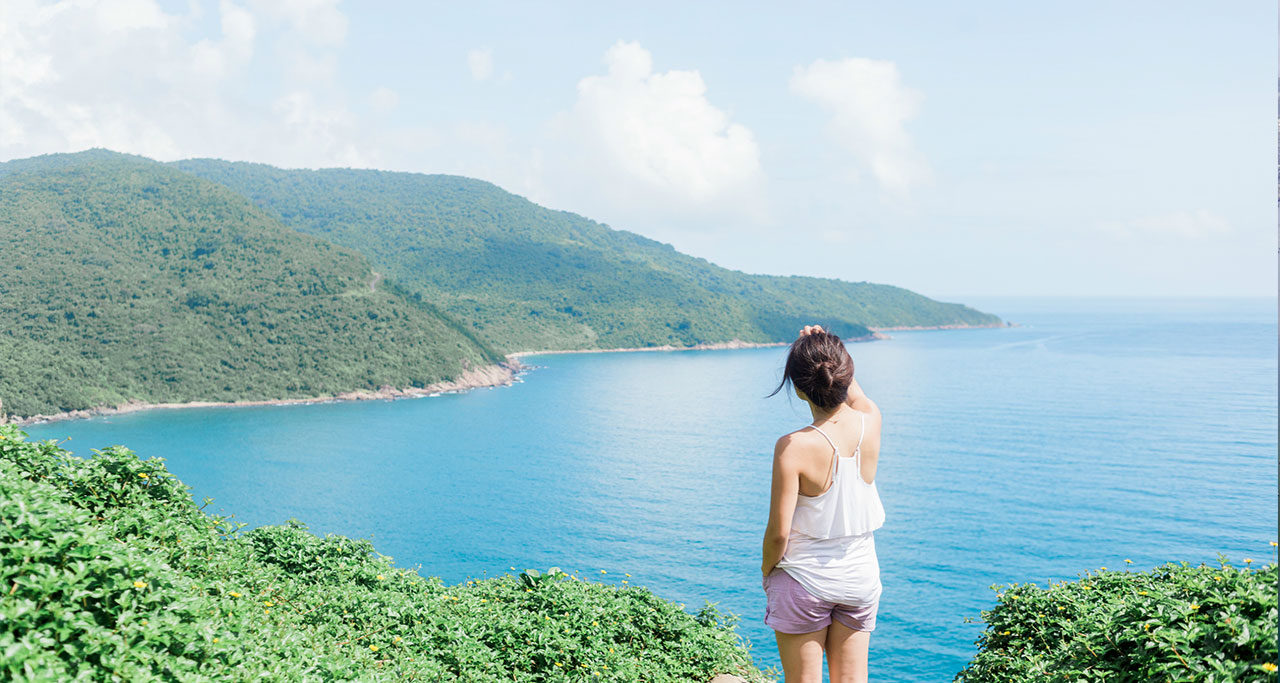 Other place to welcome your visit – Ninh Binh which resembles Halong Bay, but on land. Explore by boat through the rice paddies and cave-riddled mountains of Tam Coc or Trang An complex, then visit Bai Dinh – the largest pagoda in South East Asia.

The central Vietnam possesses blue skies and sunshine, so making a trip to charming town & beach of Hoian and the nearby broad sands at Danang while Nha Trang in further south is also at its best. Off the coast of Central Vietnam, Ly Son Island is justifiably popular in April for ocean swimming and scuba diving. At good weather, Hue and the highlands are worth for your experiences at this time.

As the gap in the temperature and the rainy days between the different areas throughout the country can vary, the choosing appreciate clothing should be carefully considerable.
– Pack your sunscreen, a shade hat with your shorts, swimwear, and a light rainproof and/or umbrella is necessary, especially towards the end of April.
– Good trekking shoes and a couple of light warm layers for mountainous areas when early morning or late night can be cooler.
– Less bare skin is a must when visiting temples / pagodas.

In early April, you can gain the advantage of great weather and the most part of beaches, cities and countryside are not too crowed. However, when the end of month comes, it is the exception. This period is holiday of the locals (celebration of Reunification day 30/4 and international labor day 1/5), so thousands of people everywhere seem to head to the beaches and most popular tourist sites for a mini-vacation which creating an increase on the prices for certain services. 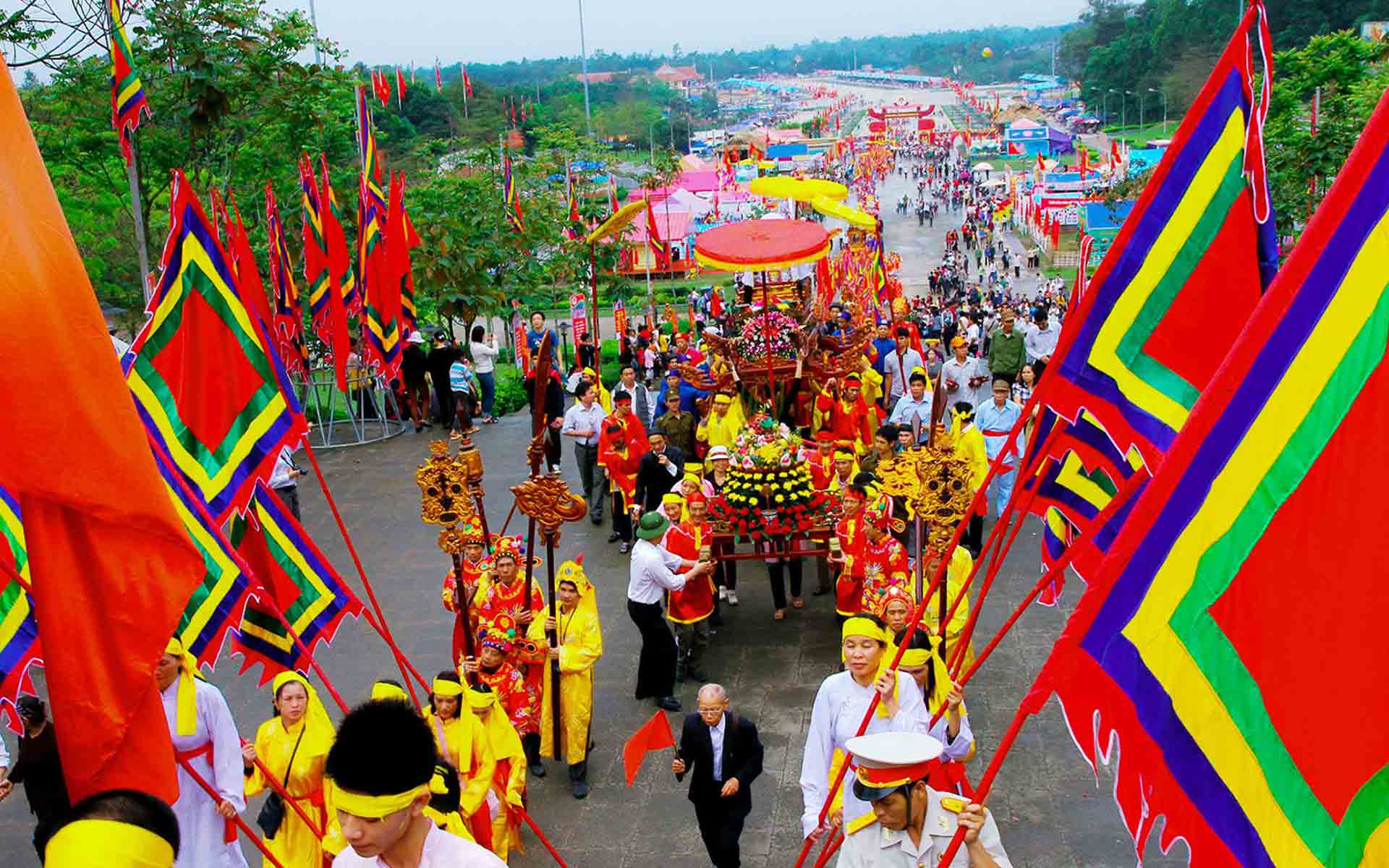 Annually held on 8th to the 11th day of the third lunar month, this festival honors and pays tribute to the Hung Kings who are the traditional founders and first emperors of the nation. The main festival day, which is a public holiday in Vietnam since 2007, is on the 10th day. There are many folk games during the festival such as “danh du” (bamboo swings), “nem con” (game of throwing a sacred ball through the ring), rice cooking competitions, lion dance, human chess, water puppet performance, wrestling, crossbow shooting, etc. Besides, “xoan” and “gheo” traditional singing are also performed at the festival by local residents. 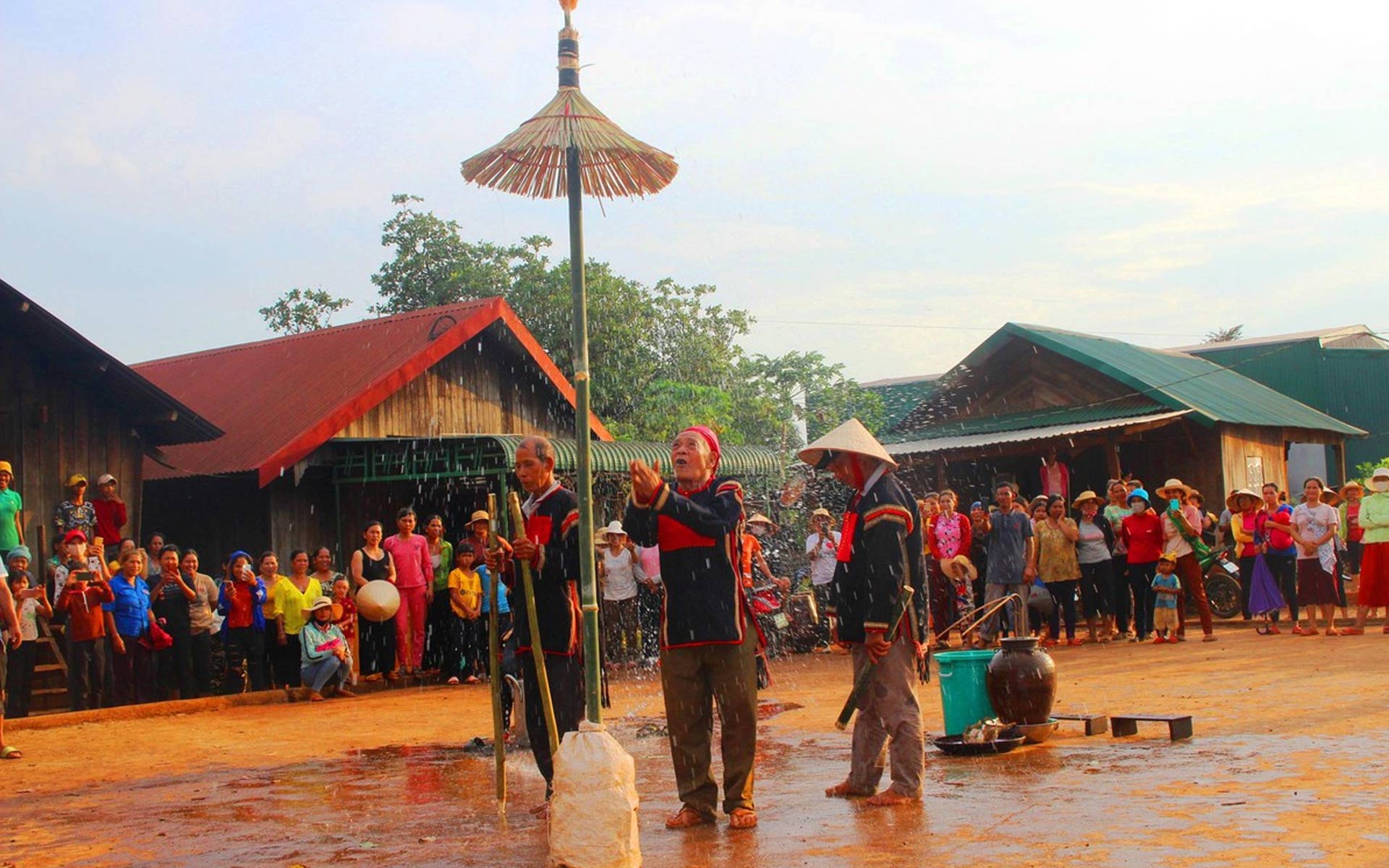 This festival is normally held in the 4th month of lunar calendar, between April and May, at the start of dry season in Mai Chau. As an invocation for rains, the festival features nighttime singing with torchlight by the White Thai villagers. According to the tradition, the bigger the festival takes place, the heavier the rains are and the more prosperous the harvest becomes. 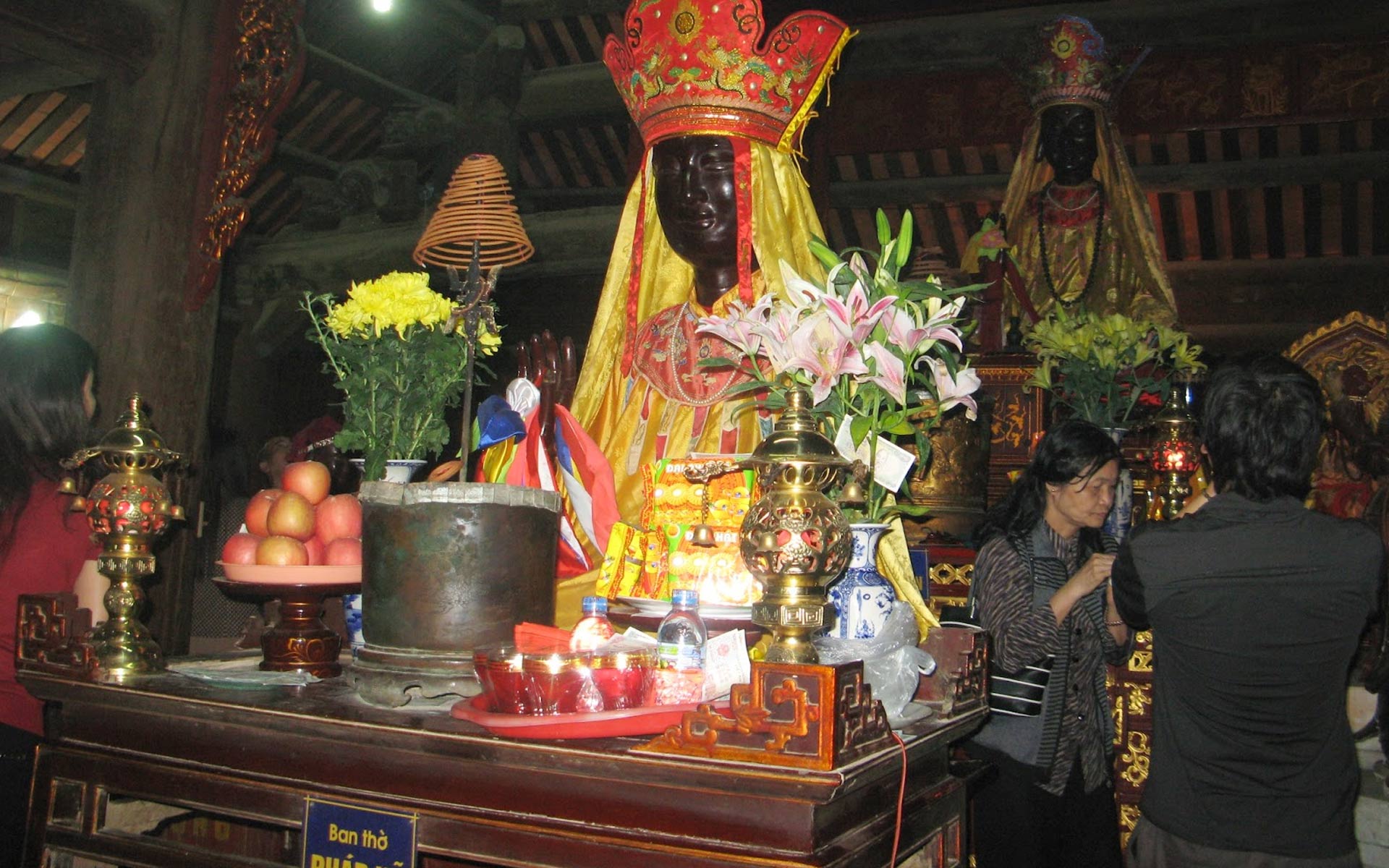 As the oldest pagoda in Vietnam, Dau Pagoda hosts its annual festival on April 8th in lunar calendar. This is the biggest Buddhism festival of the northern region of Vietnam. The festival is held to pray for favorable weather and a good crop and features folklore rituals and performances which attract a lot of religious followers and tourists. 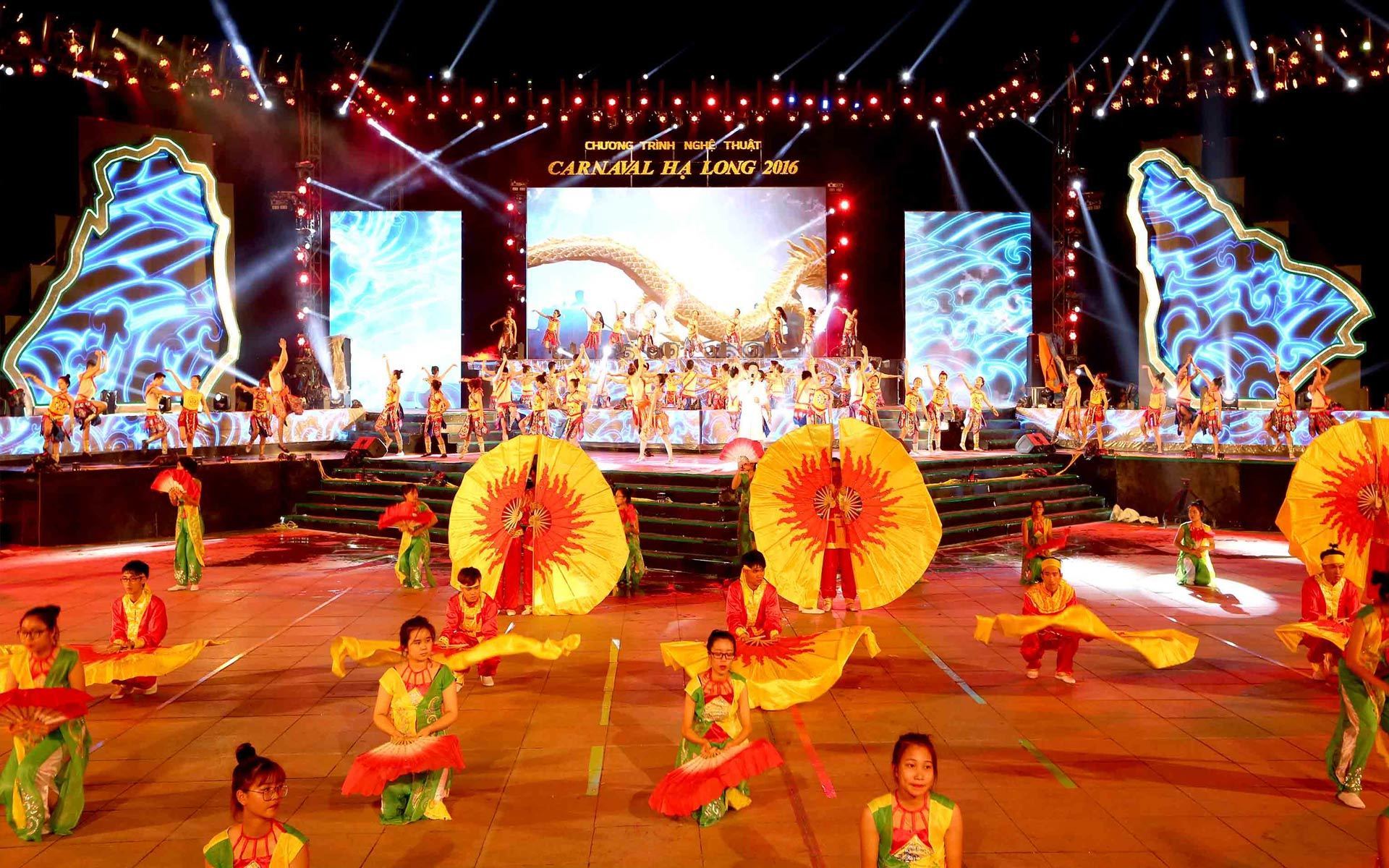 Becoming the tourist brand of Quang Ninh Province, Carnaval Halong Festival is usually held at the end of April and early May every year, coinciding with the Reunification Holiday on April 30, also starting the vibrant summer tourist season in the coastal city of Halong. For this festival, visitors will be immersed in the exciting activities, performing arts on the stage alongside the impressive parade by foreign and domestic dancers and down the streets in the lively melody. In addition to that, the festival continues to get more exciting with Vietnamese traditional art performances such as dragon dance, fire dance, drum dance, and fireworks show. 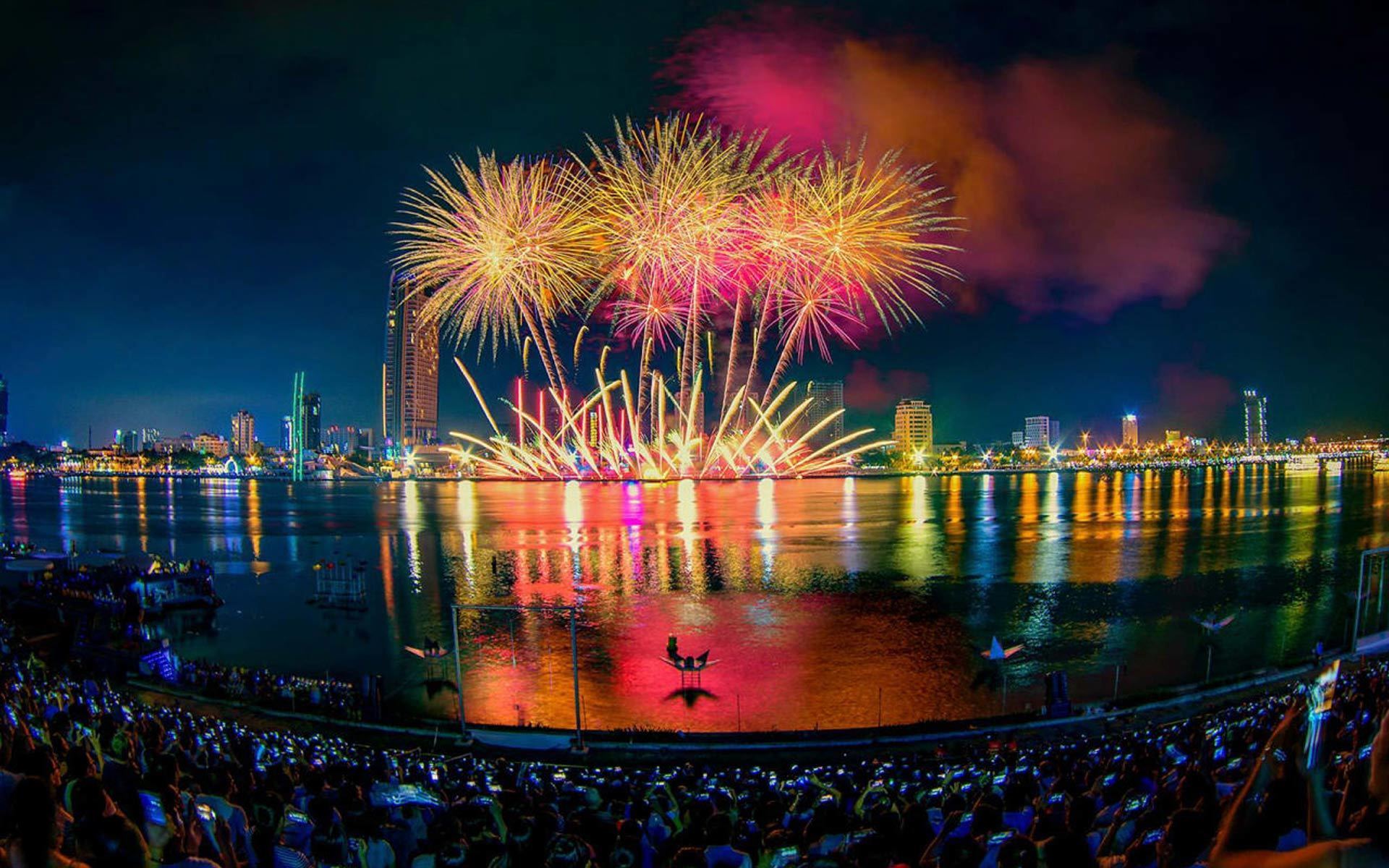 DIFF is an annual international fireworks competition hosted by Danang City since 2008 in different theme for two nights. The competition usually takes place at the end of April with the participation of several international competitors and the host – Danang City. The visitors will experience a colorful party of firework performances on Han River, and the scenery is the most beautiful and majestic ever by night. During the celebration, there are many other recreational activities such as art performance, fireworks photo exhibition and water sports which will offer tourists an exciting festival and deep impression on that charming riverside city, as well as increase the chance to draw both domestic and foreign tourists to come to Danang. 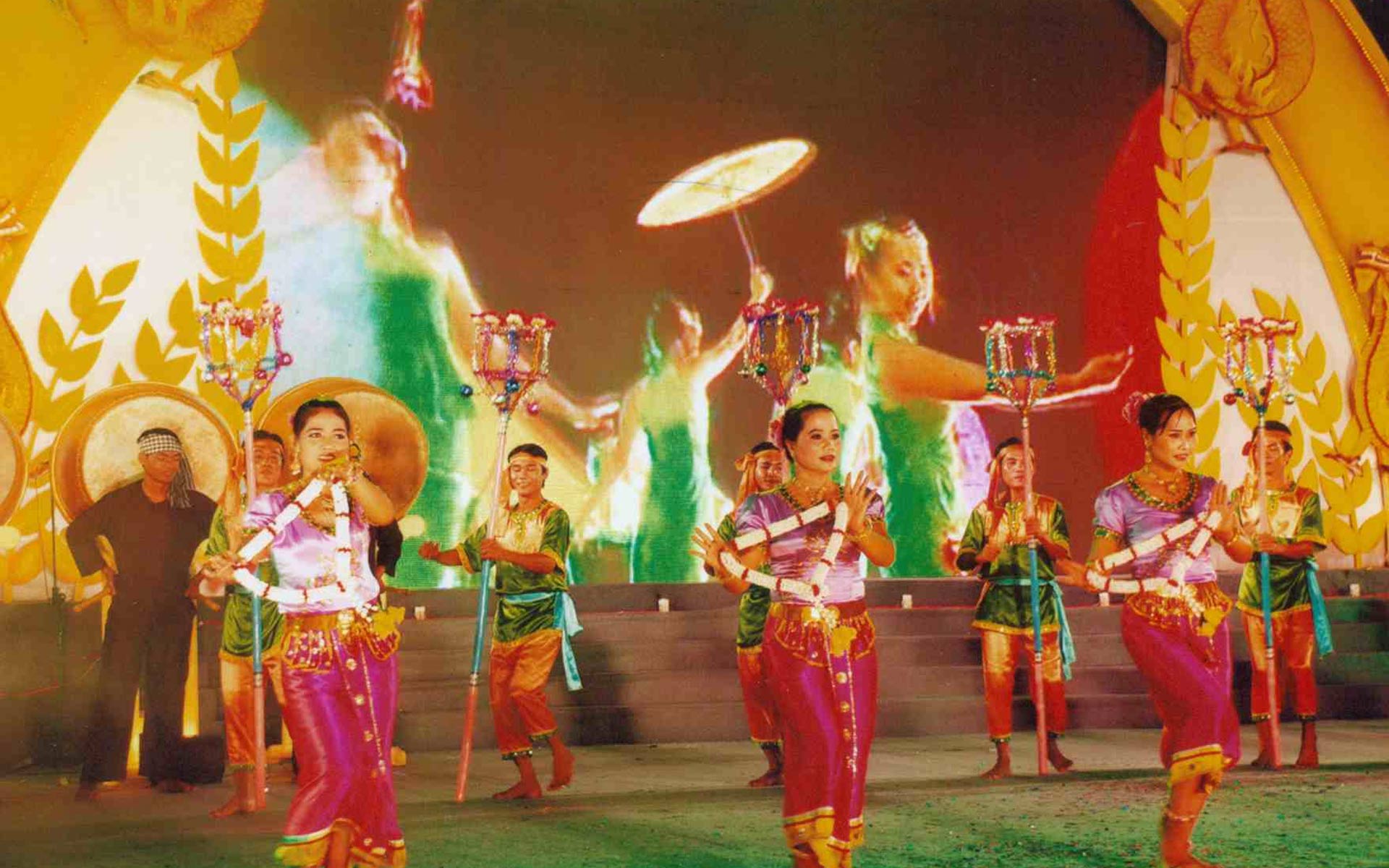 This is the New Year Festival in ancient calendar of Khmer people in Vietnam’s southern provinces. Held in mid-April (13-15/4), the festival occurs in 3 days (4 days for leap year) with different name of each festival day. In this holiday, people usually visit each other, wish each other fortune, health, prosperity and join many fun games together. 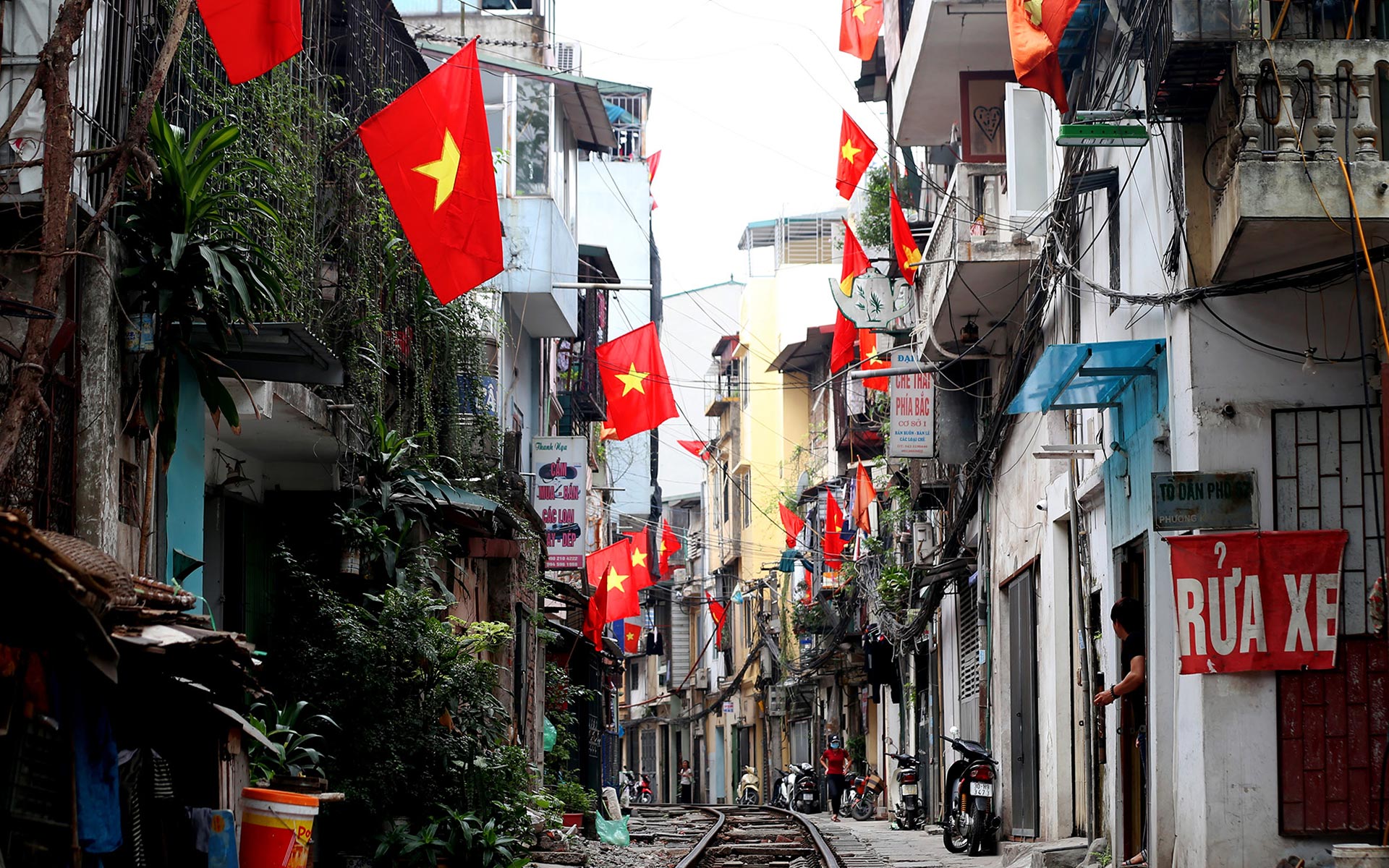 Knowing as Ngay Thong Nhat in Vietnamese, or Victory Day or Liberation Day, this public holiday in Vietnam is celebrated on April 30th. It marks the fall of the Saigon government on April 30th 1975 when Viet Cong and North Vietnamese troops captured Saigon (now Ho Chi Minh City) which brought the Vietnam war to an end and began the process of unification of the Democratic Republic of Vietnam (North) in the North and the Republic of Vietnam (South). The Danang International Fireworks Festival (April 30–May 1) is an integral part of the festivities.