Thay Pagoda, also known as Ca or Thien Phuc Tu Pagoda, is located at the foot of Sai mountain (Thay mountain) in Sai Son Commune, Quoc Oai District, around 25km southwest from Hanoi city centre. The pagoda has long been a spiritual tourist attraction by its charming landscape, unique ancient architecture in harmony with nature. Every year, Thay Pagoda Festival is held on the third lunar month to pay homage to Zen Master Tu Dao Hanh – who has made great contributions to the people and the ancestor of water puppetry. Now let’s explore this place through the following article with Vietnam Travel! 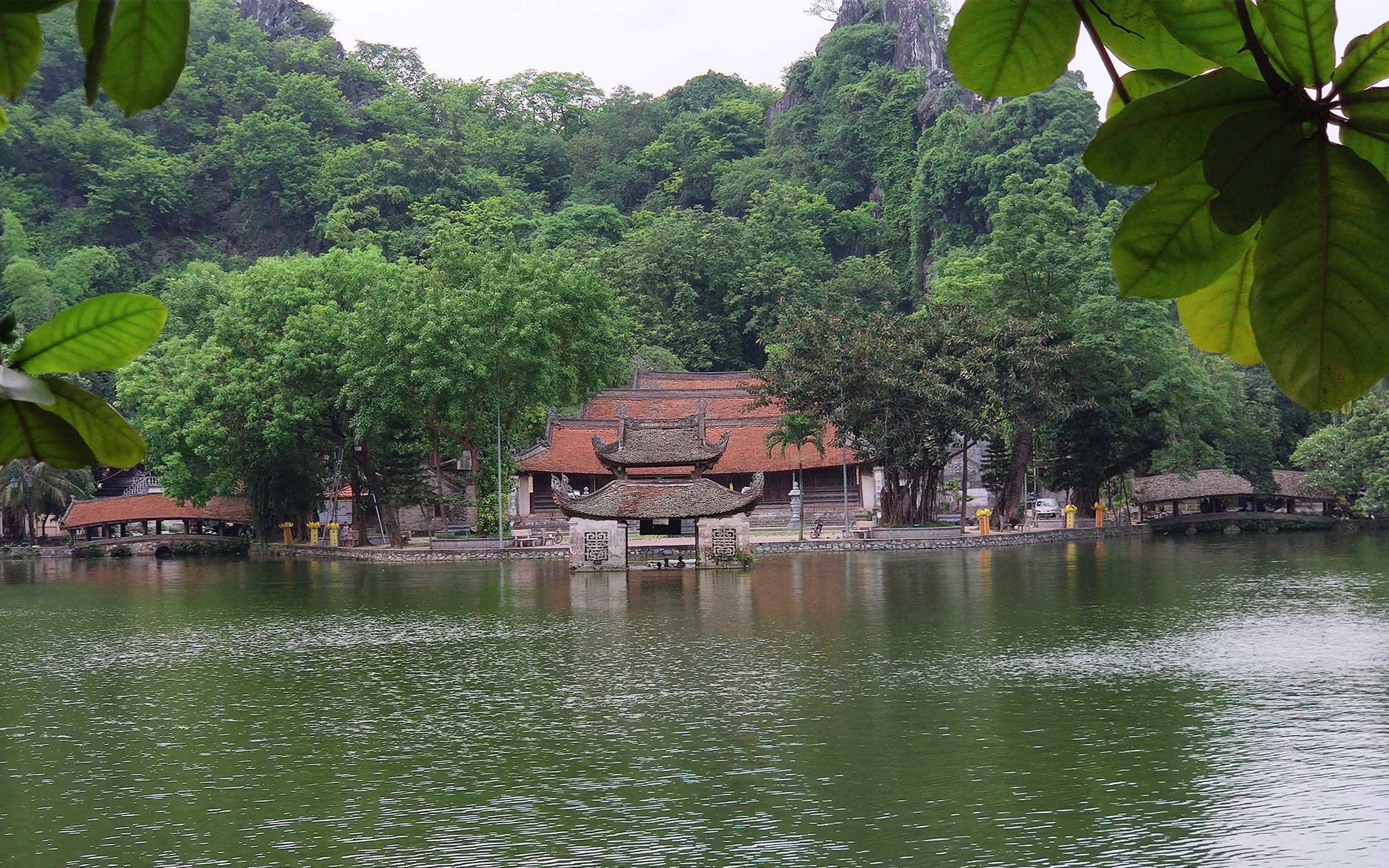 Along with Tay Phuong Pagoda and Perfume Pagoda, Thay Pagoda is one of the most attractive spiritual sites in Hanoi. The pagoda was built in the Ly Dynasty, associated with the anecdote of Tu Dao Hanh who was attached with two famous pagodas in Hanoi: Lang Pagoda (early time of his life) & Thay Pagoda (his religious life & his death). His reputation was told by the stories about his great magic and kindness in helping people without asking for return. He was also a choreographer of traditional water puppetry. Other thing made him mysteriously sainted was that at the end of his life, the Buddhist monk sat in meditation for several months without food and drink and died in that posture. Coincidentally in the year of his death (1116), King Ly Than Tong was born, leading to the myth that King Ly Than Tong was the afterlife of Tu Dao Hanh. Therefore, you can see two famous statues of Tu Dao Hanh in Thay Pagoda, including one of his real body mummified, and another one which is said to be his afterlife of reincarmation – the King Ly Than Tong.

At first, Thay Pagoda was just a small house called Huong Hai am, where Zen Master Tu Dao Hanh abided. King Ly Nhan Tong rebuilt two clusters of pagodas: Upper Pagoda (Dinh Son Tu) on the mountain and Lower Pagoda (ie Ca Pagoda, whose name is Thien Phuc Tu).
At the beginning of the 17th century, Dinh Quan Cong together with the royal family took care of the restoration and construction of the Buddha and the Holy Palace; followed by the back house, the worshiping house, the bell tower. According to the feng-shui theory, the pagoda was built on a dragon-shaped land.

Not only interesting by the myths, Thay Pagoda also attracts for its ancient structures & natural beauty of mountains & caves. You will feel relaxed and be stunned by the perfect harmony of the surrounding landscapes and Vietnamese traditional architecture. 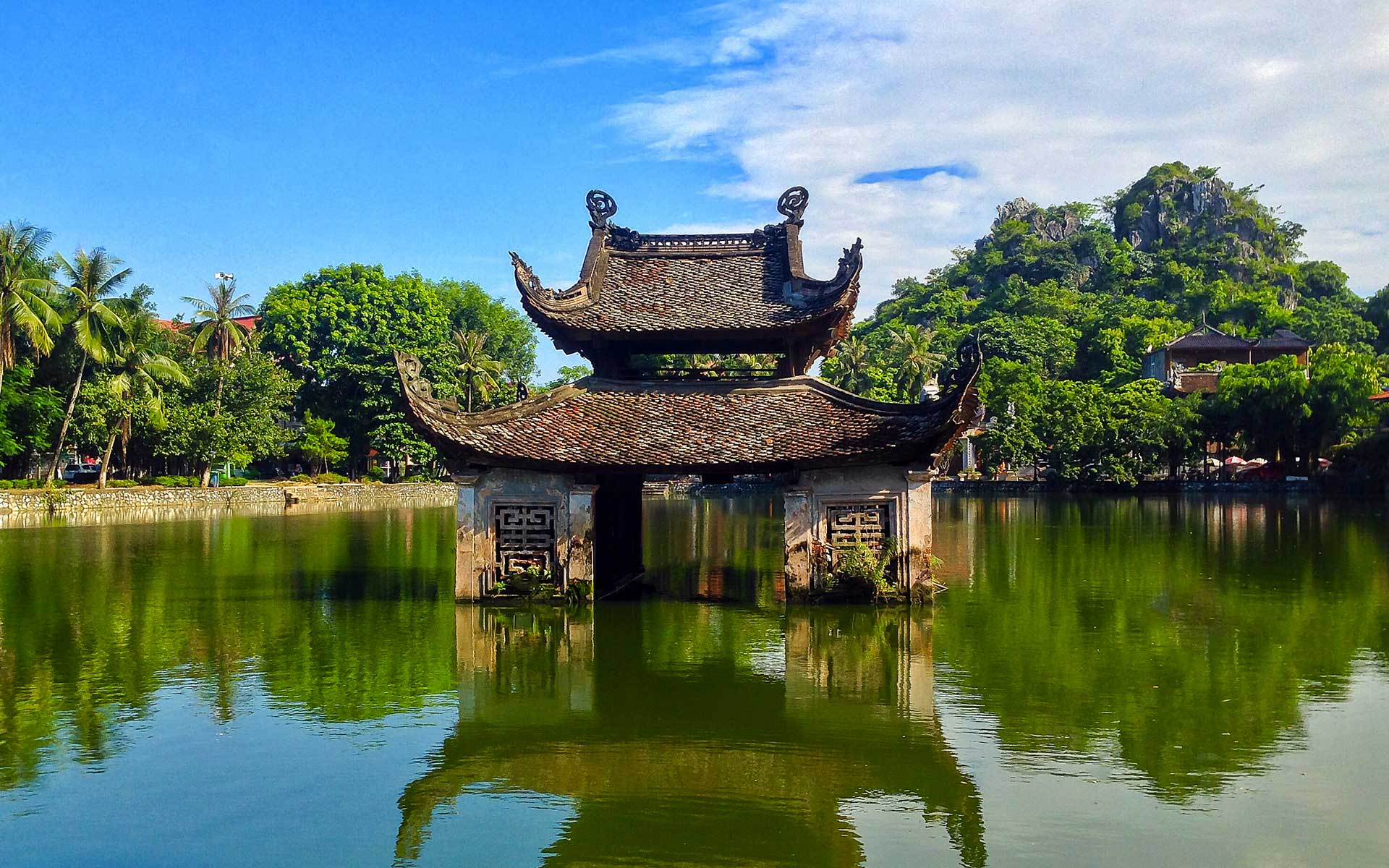 According to the feng-shui theory, the pagoda was built on a dragon-shaped land. In front of the pagoda, on the left is Long Dau mountain, the back of the pagoda and on the right is against Sai Son mountain. The pagoda facing south. In front of the pagoda, between Sai Son and Long Dau is a large lake named Long Chieu or Long Tri (Dragon pond) and a big yard as the dragon’s jaw. From this yard, you can view Thuy Dinh – the oldest water house for famous water puppet show, as the shining jewel lies in the middle of the dragon’s mouth. There are two small tiled bridges (built 400 years ago by Phung Khac Khoan) on the left and right wing of Long Tri lake: Nhat Tien (bridge welcoming the sun) overlooking to Tam Phu temple & Nguyet Tien (bridge welcoming the moon) linking with the paths up to the mountain. These two bridges are considered as the dragon’s beards.

The main part of Thay Pagoda (Lower Pagoda) consists of three parallel buildings called Ha (lower) Pagoda, Trung (middle) Pagoda and Thuong (upper) Pagoda, of which Ha Pagoda and Trung Pagoda are interconnected by the roof system. The two sides of the pagoda are the long corridor worshiping 18 Arhats with the steeple behind. Ha Pagoda is the sacrificial house, with statues of Duc Ong and Thanh Hien. Trung Pagoda displays a Buddha altar with two statues of Ho Phap and Thien Vuong in both sides. Thuong Pagoda is separate, at the highest position, housing the statue of Amitabha, the three-life statue of Zen Master Tu Dao Hanh, the statue of Zen’s parents: Mr. Tu Vinh and Mrs. Tang Thi Loan together with 2 statues of his close friends, namely Minh Khong and Giac Hai.

Following Nguyet Tien bridge and trek 250 steps up to the Upper Pagoda (chua Cao) on Sai Son mountain, which was Hien Thuy am – the first monastic place of Tu Dao Hanh. The Upper Pagoda has a rather small architectural scale, including the bell tower, the front road and the upper house. 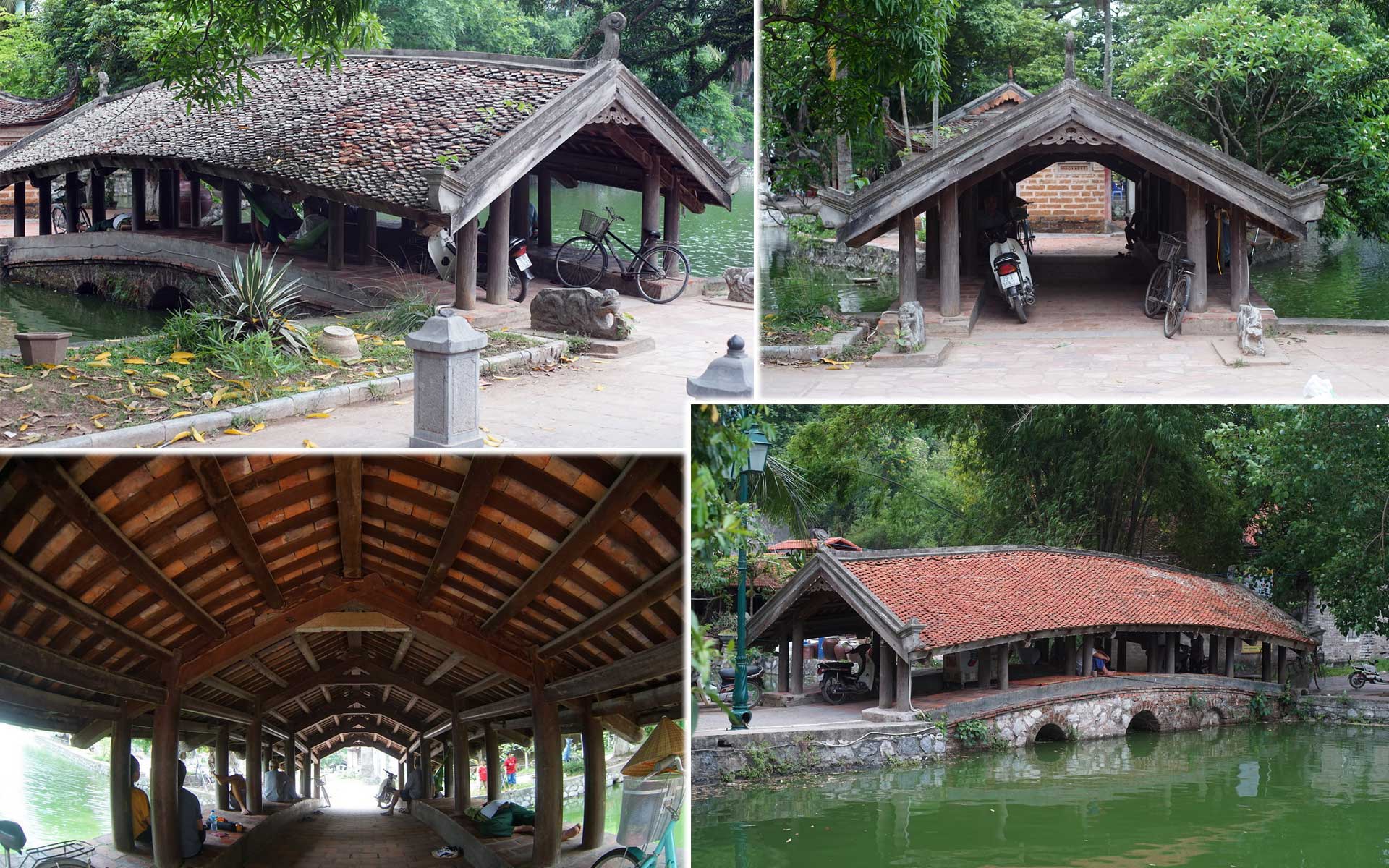 The highest place of the relic is the mouth of the Cac Co cave. The cave is as deep as a bottomless dragon belly which still holds many mysterious myths as well as many popular poems about this cave. This is also the place where the couple in love gathered during the festival in the past.

In addition, when coming to Thay Pagoda, you can also admire and learn the ancient system of epitaphs with high cultural value in Chinese and Nom.

The unique architectural works contributes to promote Thay Pagoda to become one of the fascinating Hanoi attractions.

When to Visit Thay Pagoda?

The main festival of Thay Pagoda takes place from 5-7 March of the lunar calendar. If you want to experience and learn about the unique cultural features of this festival, you should come in the right festival, however, please be aware that these are extremely crowded in this period.

If you simply want to visit the Thay Pagoda, you can choose cool times with no crowds to be more comfortable.
+ Time after Tet (but not to the main festival) when the atmosphere is still quite cool, not entering the summer heat.
+ The period from September to October when is the autumn in Hanoi and the weather is also very pleasant.

In March, it is also time for the rice flowers to bloom red in this ancient pagoda of nearly 1,000 years old, creating a unique beauty that is hard to find. According to Oriental medicine, the whole rice plant is used as medicine with the effect of heat, detoxification. Particularly flowers are used to treat many diseases such as stomach ulcers, duodenum. Don’t miss it. 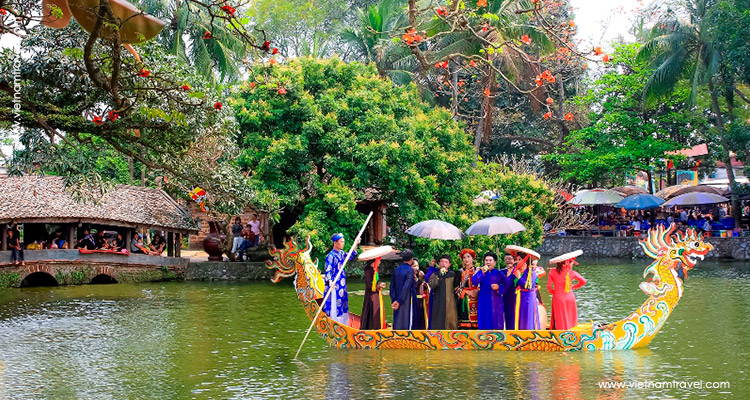 Traditional festival in Thay Pagoda is annually held from the 5th to 7th March in the lunar calendar (March – April, varying by the year). It is actually a joint activity from 4 villages: Thuy Khe, Da Phuc, Khanh Tan, Sai Khe.

Thay Pagoda Festival surely brings the feelings of delight for tourists. The Buddhists who worship Buddhist for the peace and luck together with tourists going sightseeing create the crowded and lively festive season. – Dress politely and neatly.
– During the trip, there will be many slippery climbing paths, you should pay attention to wear sports shoes with good grip or should bring a pair of honeycomb sandals.

– Bring some snacks and water to use along the way.

– When visiting Cac Co cave, you should rent a flashlight.

– Pay attention for any assistance or help that not include in your fixed plan, as it can cost unexpected service fee (for example: someone help to organize the offerings for worship or explain the history of the pagoda or want to show you the cave without your reservation in advance). You should carefully ask how much the service costs to avoid any misunderstanding in case of thoughts that they help for free, but it is really not, especially during the festive season.

– Fun fact: The Quintessence of Tonkin, shortly called Tonkin Show or “Tinh Hoa Bac Bo” in Vietnamese, is a must-see cultural spectacle. The show draws inspiration from the spiritual history of the Thay Pagoda, telling the story of the pagoda’s founding by venerable monk Tu Dao Hanh, and explaining the ancient union between religion and the monarchy. The show offers you a chance to explore Vietnamese history and culture from a contemporary perspective, with hundreds of performers, an interactive water stage, and state-of-the-art performance technology.

How to Get to Thay Pogada? 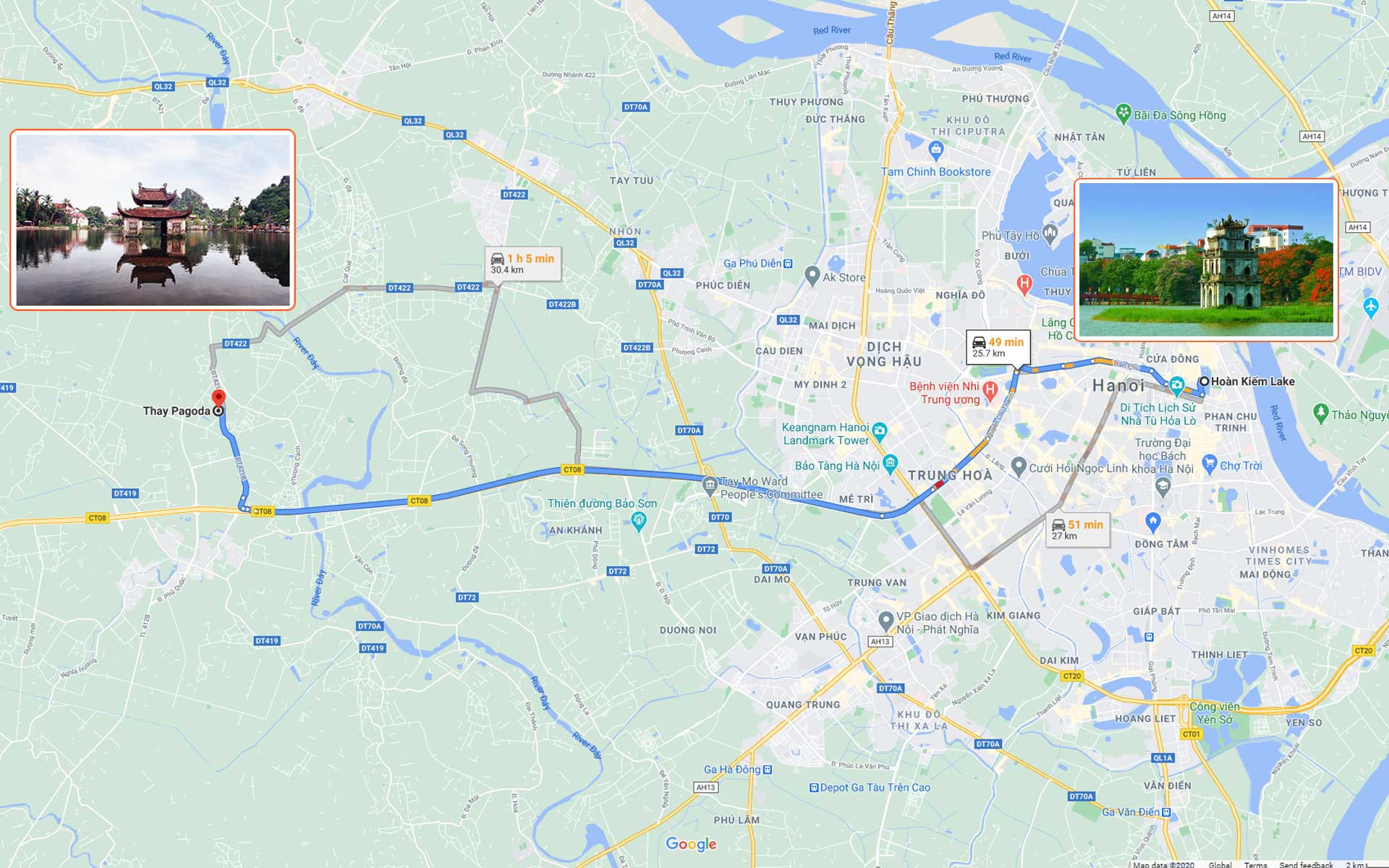 Just around 25km southwest from Hanoi center, you can easily reach this place by following ways:

If traveling by motorbike, you go along the Thang Long Avenue frontage (on Thang Long Avenue, no motorbikes are allowed, so please be careful not to enter for safety), from Big C – Tran Duy Hung intersection reaching the turn to Thay Pagoda about 15km.

If you choose public transport, you can take the bus. Currently, from Hanoi, you can reach Thay Pagoda by bus CNG01 from My Dinh bus station – Son Tay bus station, the bus will stop at the entrance of Thay Pagoda. It operates from 5.00am – 8.00pm for every 15 minutes. 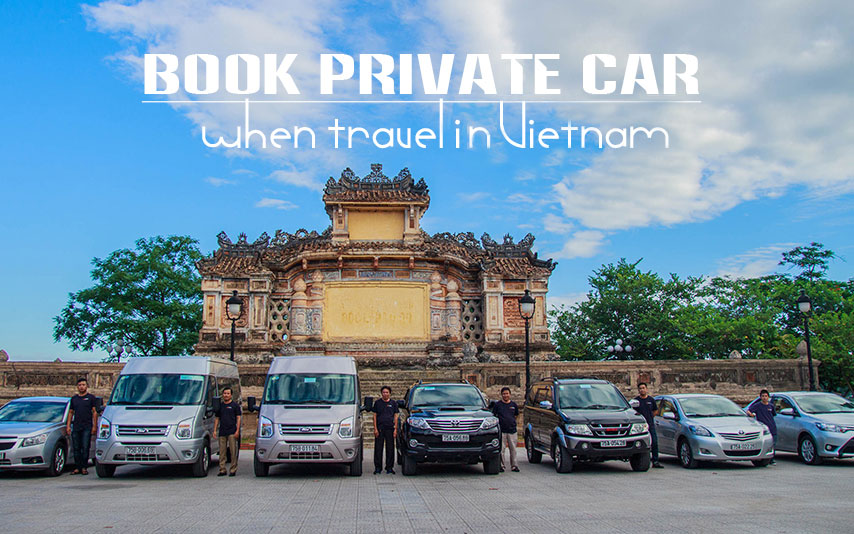 For more comfort and flexibility, a private car / van with driver will definitely work. Despite of a higher price than other means, you will save time and get stop wherever and whenever you need on the way. To get more understand about the site, you should also consider to get an experienced tour guide to escort from Hanoi.

For day tour to Thay Pagoda, you can combine with some other highlight spots nearby such as Van Phuc Silk village, Tay Phuong Pagoda or Duong Lam village. It will be a nice journey to enjoy peaceful villages, ancient architectures, cultural values & friendliness of locals you meet on the way.

Just be ready and Vietnam Travel team will assist you to have a great trip that you won’t forget! 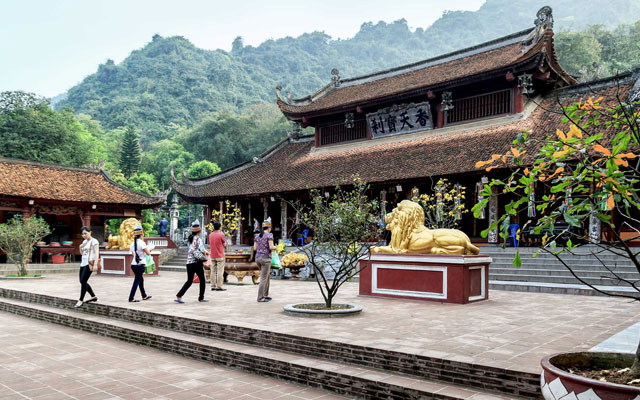 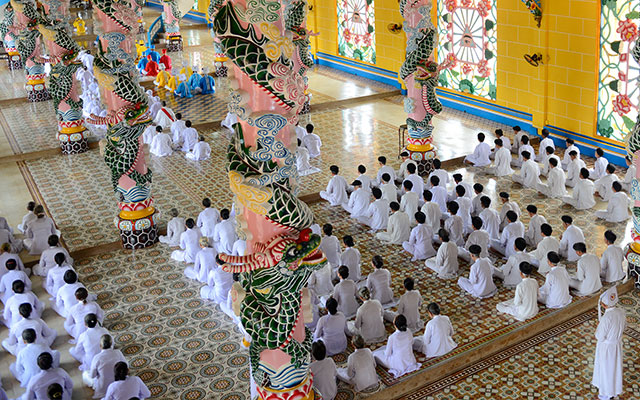