But Thap Pagoda, also known as Ninh Phuc Tu, is one of the most beautiful ancient pagodas in Northern of Vietnam which is perfectly preserved relatively until today. Located on the riverbank of Duong River in But Thap Hamlet, Dinh To Commune, Thuan Thanh District, Bac Ninh Province just less than an hour drive from Hanoi center. In 2013, But Thap Pagoda has been recognized as Special National Relic and the Buddha statue “Thien Thu Thien – Thousand eyes and hands” in the pagoda was granted a national treasure certificated by Prime Minister.

The pagoda is recommended for visitors who love the cultural as well as historical aspect and religion of Vietnam. The trip to But Thap Pagoda should combine with visiting Bat Trang Ceramic Village, Dong Ho Folk Painting Village or Dong Ky Carpentry Village. 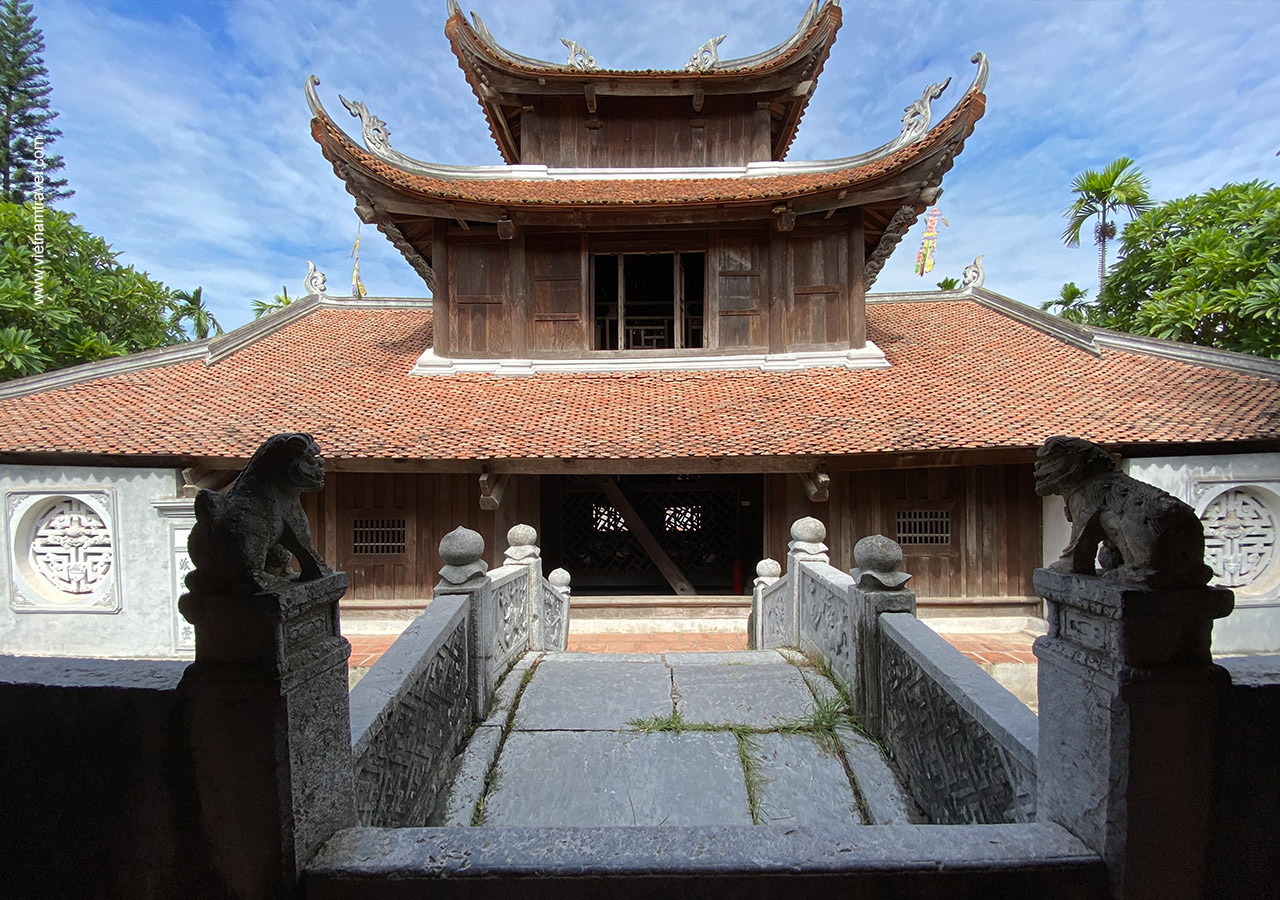 History of But Thap Pagoda. 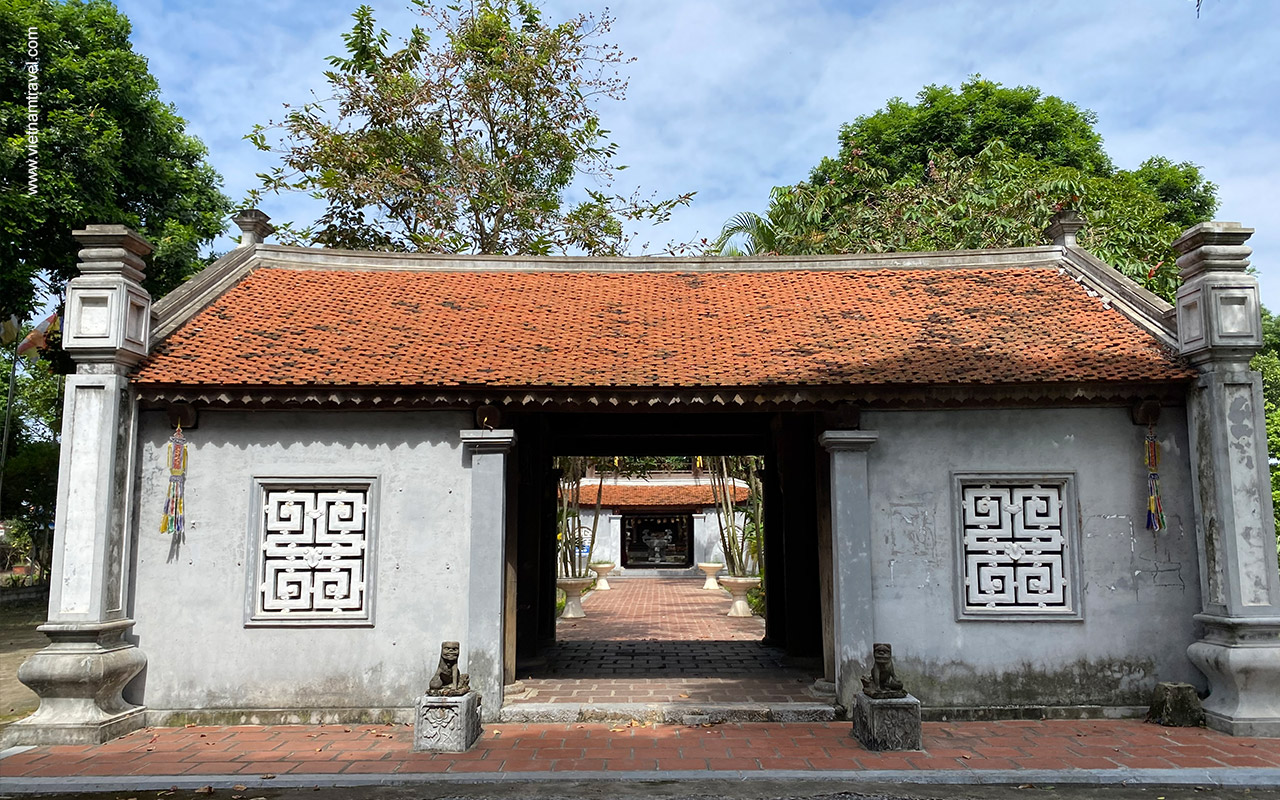 Front entrance of But Thap pagoda

Up to now, no researcher has given an exact document to confirm when the pagoda existed. However, according to the document from the Geography of Ha Bac in 1982, the pagoda dated back to the dynasty of King Tran Thanh Tong (1258 – 1278), and Zen Master Huyen Quang was the abbot here by that time. He built a 9-storey stone tower and decorated with lotus flower, unfortunately, this tower was no longer available.

By the 17th century during the Le-Trinh period, the pagoda was under the biggest renovation by the abbot – the monk Chuyet Chuyet from Jujian Province, China, whose contribution made Buddhist period flourishing nationwide and his successful disciple Zen Master Minh Hanh. This restoration lasted from 1644-1647 with the great contribute of finance and land from the Queen – Dieu Vien, Trinh Thi Ngoc Truc, Princess Le Thi Ngoc Duyen and Princess Trinh Thi Ngoc Co. After completed, the pagoda was named “Ninh Phuc Tu”.
All of them have been worshiped and their statues placed in But Thap Pagoda nowadays.

In the reign of King Tu Duc, in 1876, when the King came here, he saw Bao Nghiem Tower like a giant pen, reaching straight to the sky, then called it “But Thap” as the name of the pagoda today.

Architecture of But Thap Pagoda. 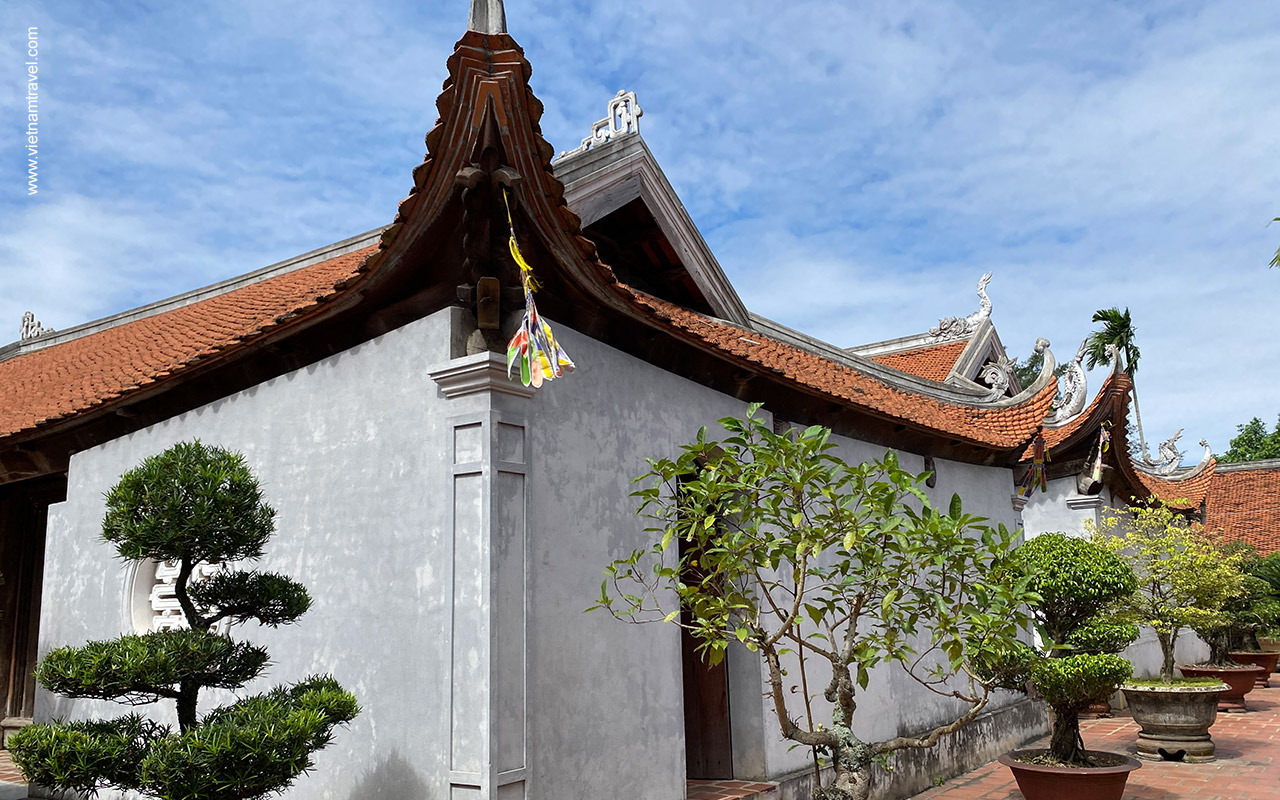 Architectural complex of But Thap Pagoda is prominent among immense rice fields. The pagoda turns to the South, which is the direction of wisdom, in the Buddhist philosophy.
The pagoda was built according to “Noi Cong Ngoai Quoc” architectural style, which features 2 long corridors connecting the front house to the back house (also called the ancestral house or the monk’s house) behind, forming a rectangular complex surrounding the incense burning house, the upper house and other structures in between. In terms of ground, the inner pagoda layout is in the form of the word “Cong” while the outside has a frame like the word “Khau” or “Quoc” script. 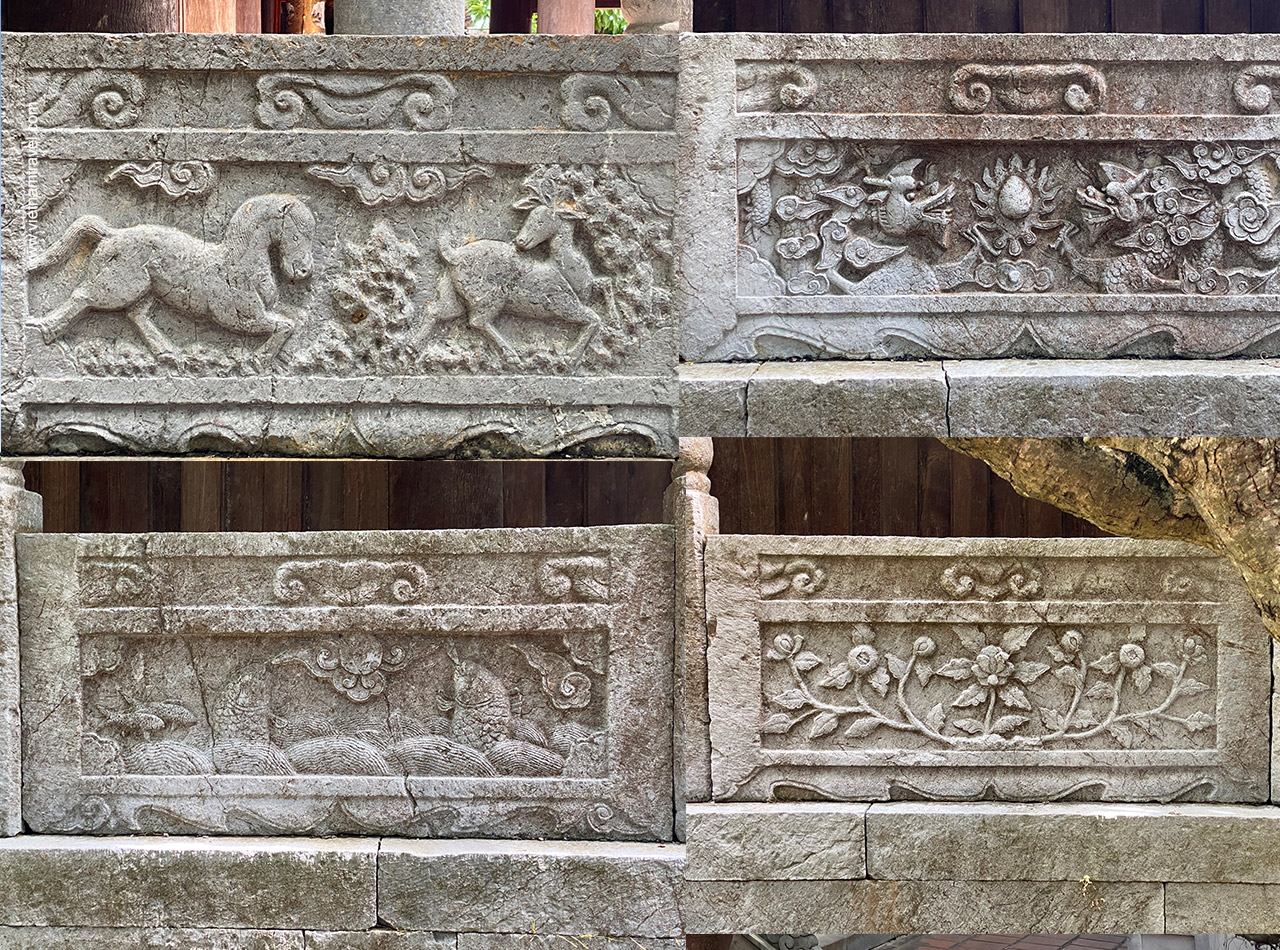 Stone carving on corridor of But Thap pagoda 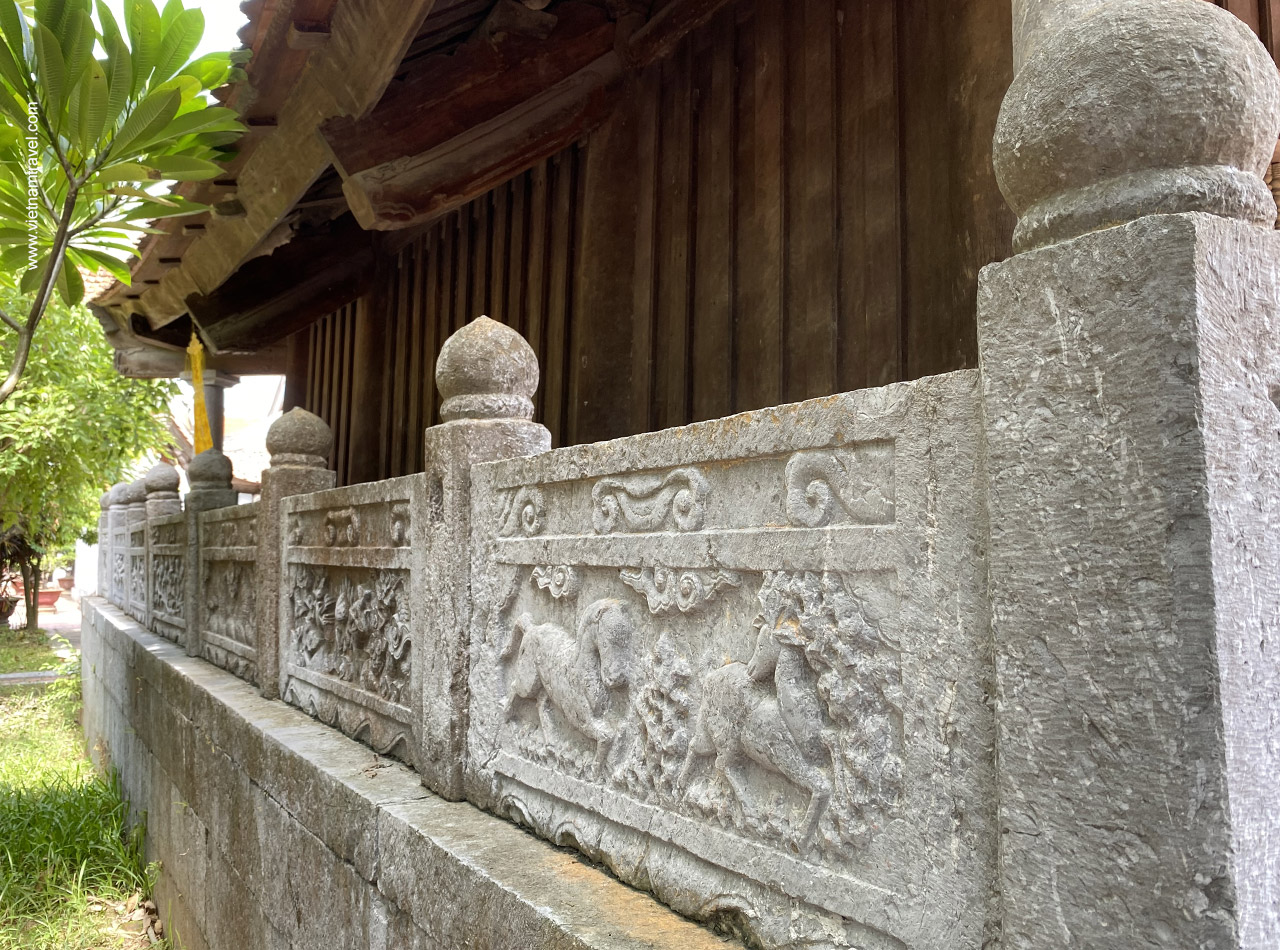 Followed by this architectural style, the outermost of the pagoda has the three view gate (tam quan), followed by the bell pavillon with 2 floors and 8 roofs and stele house.

Located between two corridors (each row of 26 rooms), the central area consists of 7 rows of houses that are all horizontal, running in parallel, arranged on a vertical axis – the way of the Shinto religion with the total length of more than 100m. They include the Front Hall, the Thieu Huong (incense burner), the Main Hall, the Tich Thien Am pavillon (connected with the Main Hall by a stone bridge across the lotus lake), the Central House, the Sanctuary and the Rear Hall. 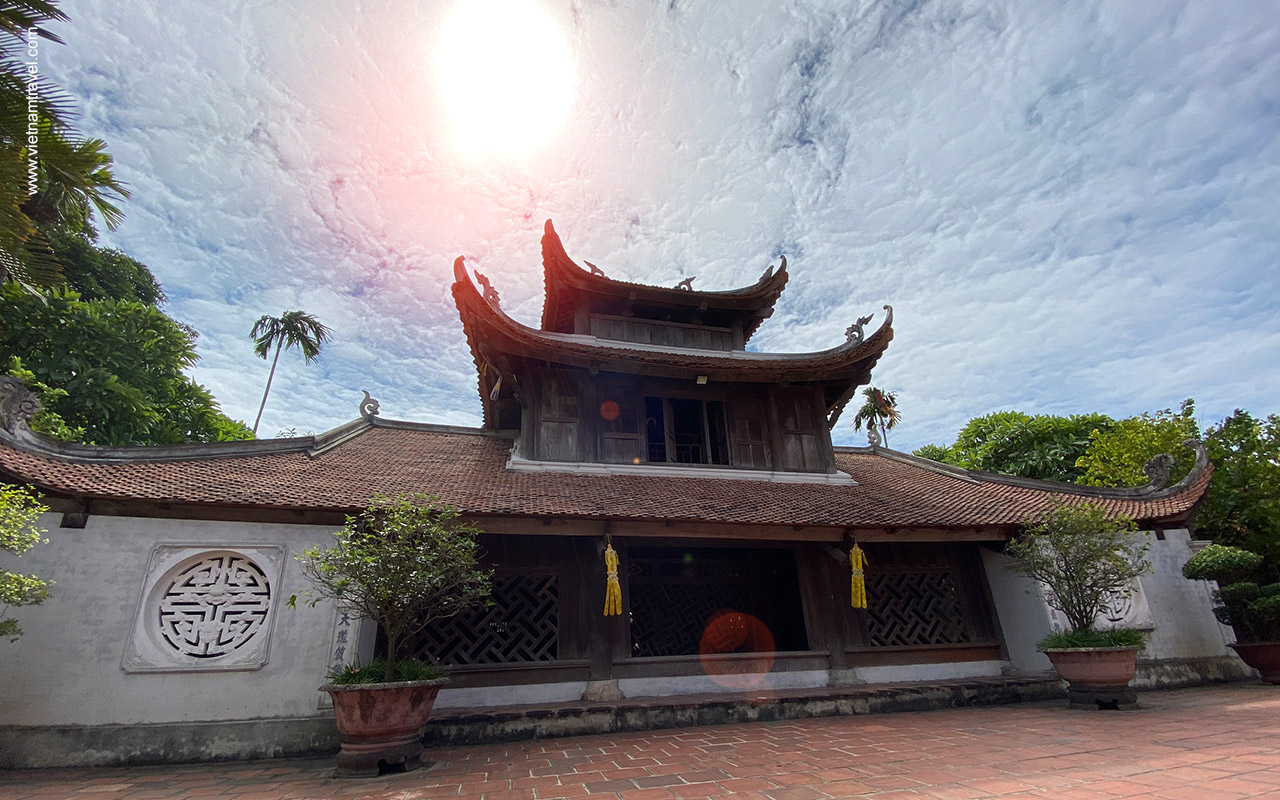 The whole pagoda consists of more than 50 ancient precious statues, of which, the most unique treasure is the Buddha statue “Thien Thu Thien – Thousand eyes and hands” made in 1656 with 3.7m high, 2.1m wide. This Buddha statue has 11 heads, 46 big arms and 954 different small, long and short arms with an eye on each, blooming as high as a halo, placing on a lotus dragon team in a relaxed and religious posture.

Another special and unique thing of the pagoda is the tall, majestic stone stupa which is like a giant pen, reaching straight up to the sky, called Bao Nghiem Tower where placed a relic (xa li) of the first ancestor – the monk Chuyet Chuyet. The tower is 13.05m high, 5 floors with a green stone top and sophisticated decoration around. 5 corners of 5 floors include 5 small bells. The tower has a round chamber with a diameter of 2.29m. The bottom floor of this tower has 13 stone carvings, mainly animals. This work shows the talent of stone grafting and sculpture art of the old Vietnamese craftsman. 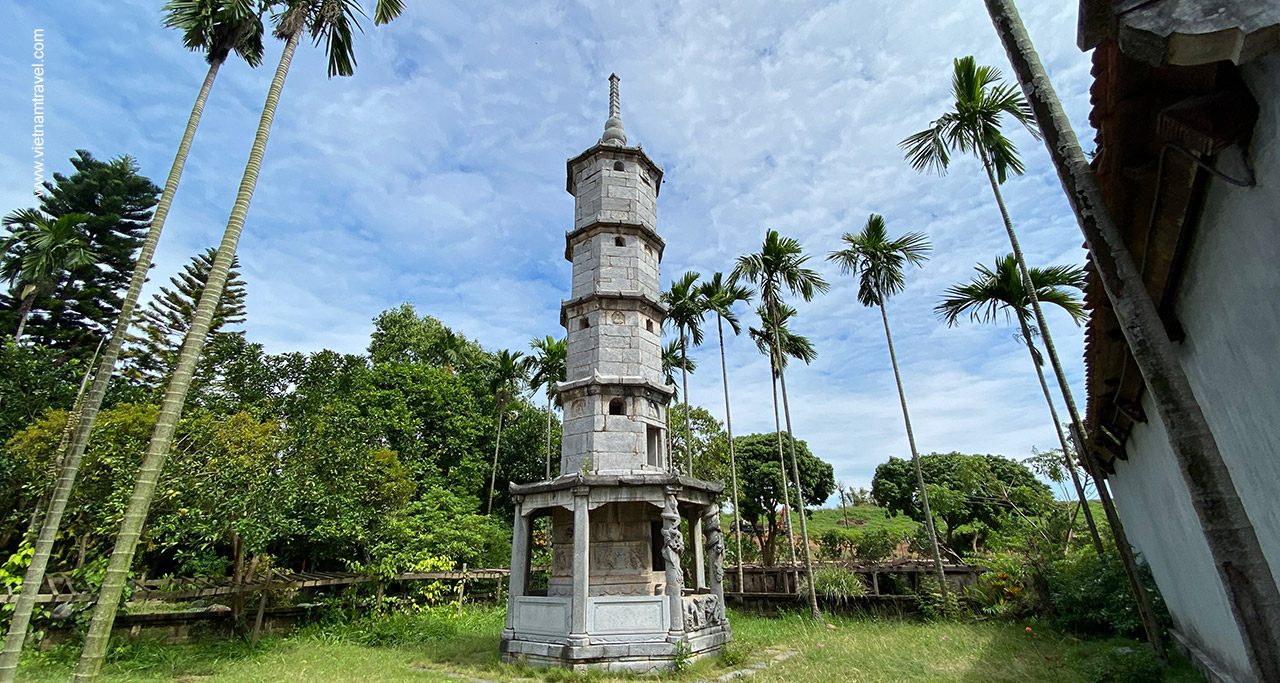 At the back of the Rear located Ton Duc Tower which is 11m high, 5 floors where the relic of Zen Master Minh Hanh, the second ancestor of the pagoda is placed. The four sides of the tower are sealed with stone. Recently, in the heart of the tower, people have just found two ancient bronze books, writing / engraved Buddhist scriptures.

Each architectural work of this pagoda is an ingenious work of art with decorative motifs made of rich and varied materials such as stone, wood, and brick. It shows the harmonious combination between architecture and natural environment that makes But Thap Pagoda as its own unique character. 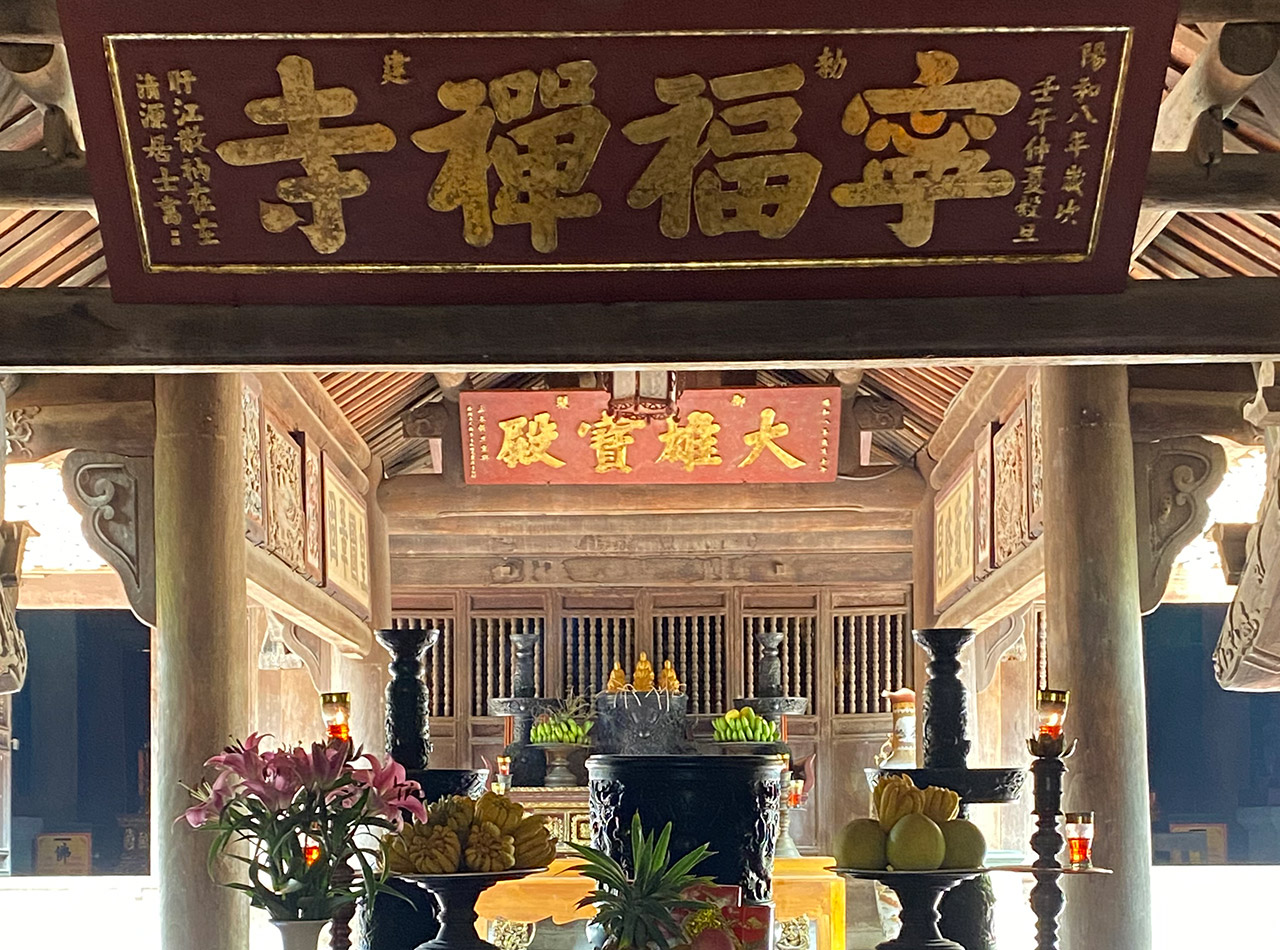 But Thap Pagoda festival is annually held on the 23rd and 24th March in lunar calendar at But Thap Pagoda. It features many traditional culture activities, including 2 parts: ritual and outdoor activities. The festival attracts local people as well as many visitors from other cities and foreign tourists.

How to get there? 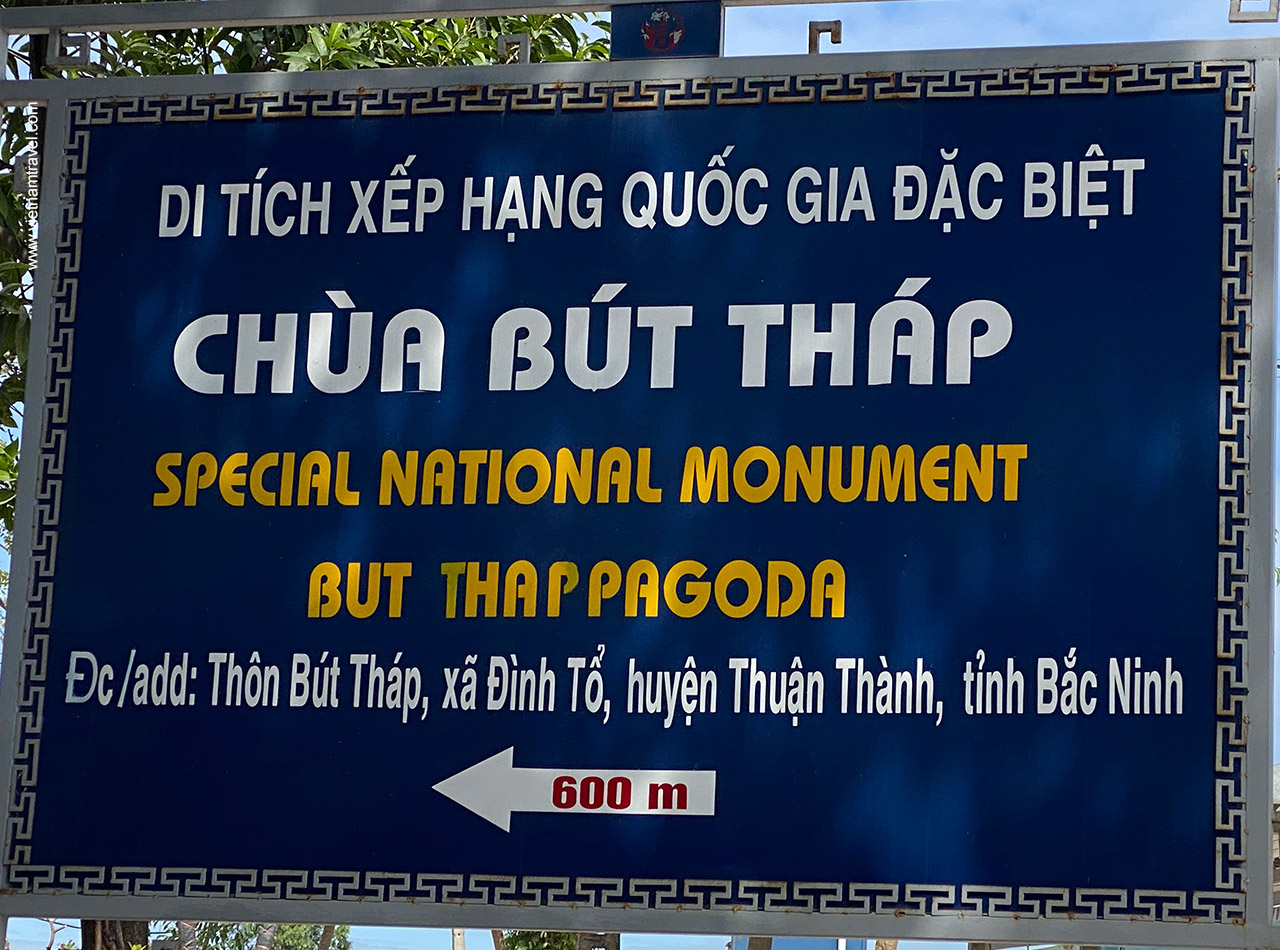 Just 30km far from Hanoi (~ 45 minutes of drive), you can easily reach But Thap Pagoda by motorbike or taxi by reaching the highway 5A to Co Bi road, then continue with highway 20 or along highway 17 to highway 20. With budget travelers, public bus (No.54 or No.204 from Long Bien station to Bac Ninh) is also a good choice of transfer from Hanoi to Bac Ninh Province, then you need to take another taxi or motorbike to get to the right destination.

For the best experience with most flexibility and well understanding about the site, a private car/van and good tour guide will definitely work. Through many ups and downs of history, But Thap Pagoda has always been protected, preserved and embellished more and more beautiful to become one of the famous tourist attractions – spiritual tourism in Bac Ninh – Kinh Bac.

Contact our Travel Consultant team to have such good experience in your trip plan in Vietnam! 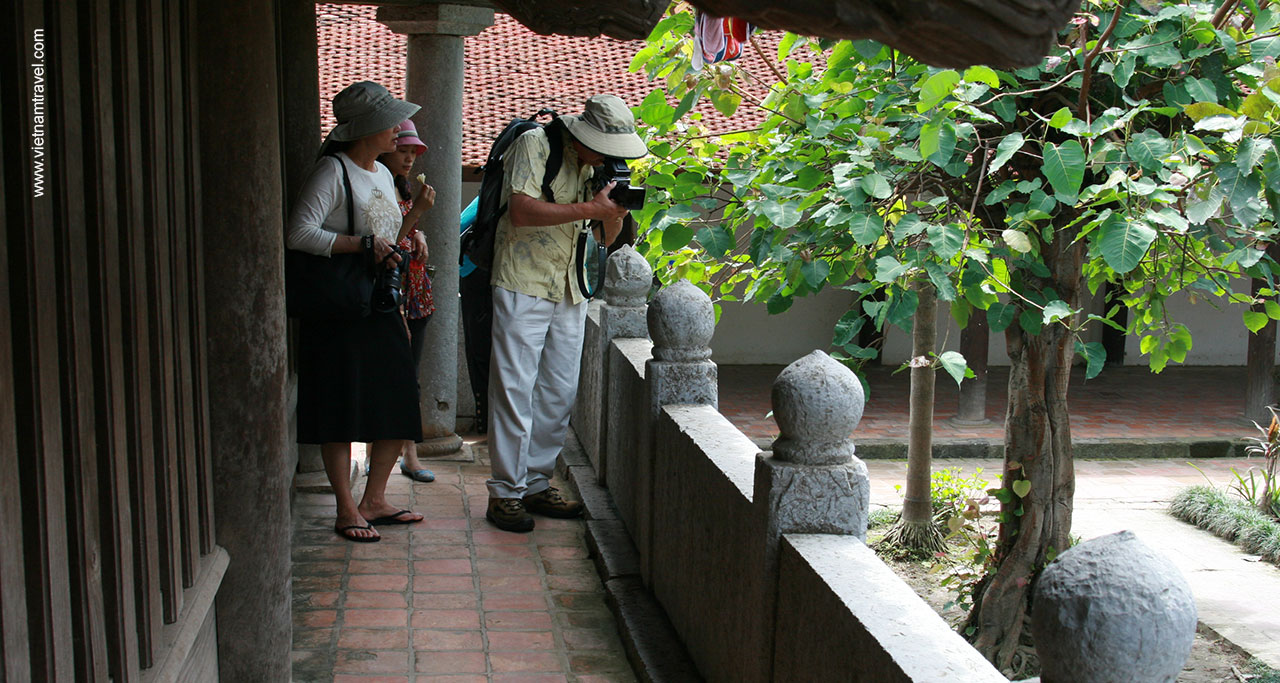