Dong Ngac Ancient Village (shortly called Dong Ngoc Village or Ke Ve Village) is located 12km away from Hanoi downtown, in North Tu Liem District. For easier imagine, searching for Thang Long Bridge and you will see the village sitting at the foot of the bridge (on the left). 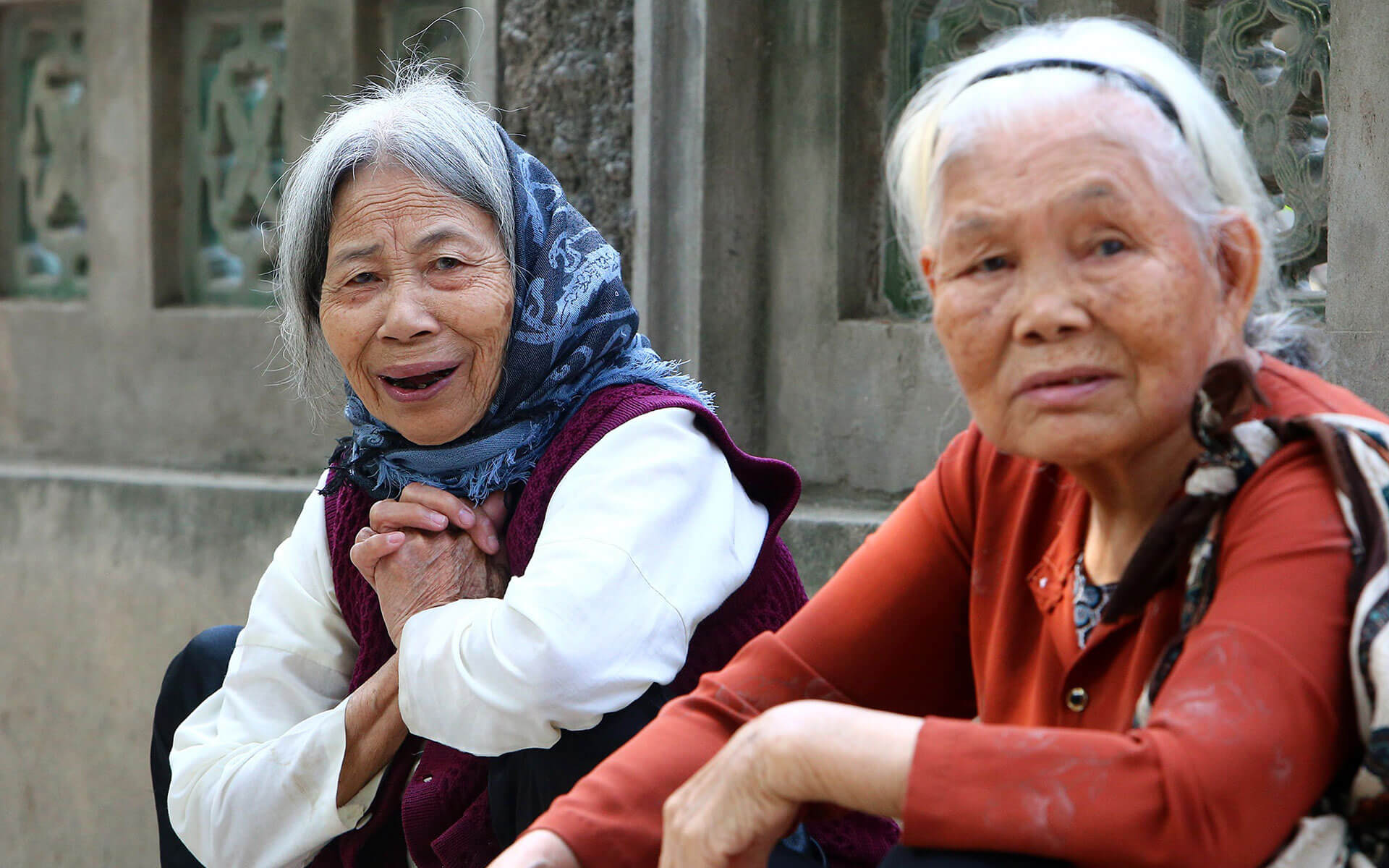 This quaint, beautiful village is famous as “village of scholars” where many people passed doctorate in the last centuries. Moreover, the old architectural designs also bring history to life. Stepping into the village feels like immersing into another world of the peaceful atmosphere, its architecture, handicrafts, and the friendliness of the locals.

Besides many classic Hanoi City Tours, if you are nostalgic and seek for long lost stories for your memory, then this is the place for you! The village is worth a visit to explore well-preserved traces of its past.

1. “Hanoi’s village of scholars” – A history of academic excellence

The CNN travel introduced about this ancient village in 2019 as following: “On the outskirts of Vietnam’s capital; well removed from the tourist trail, is Dong Ngac, a 1,000-year-old “village of scholars” that has barely changed in centuries”. 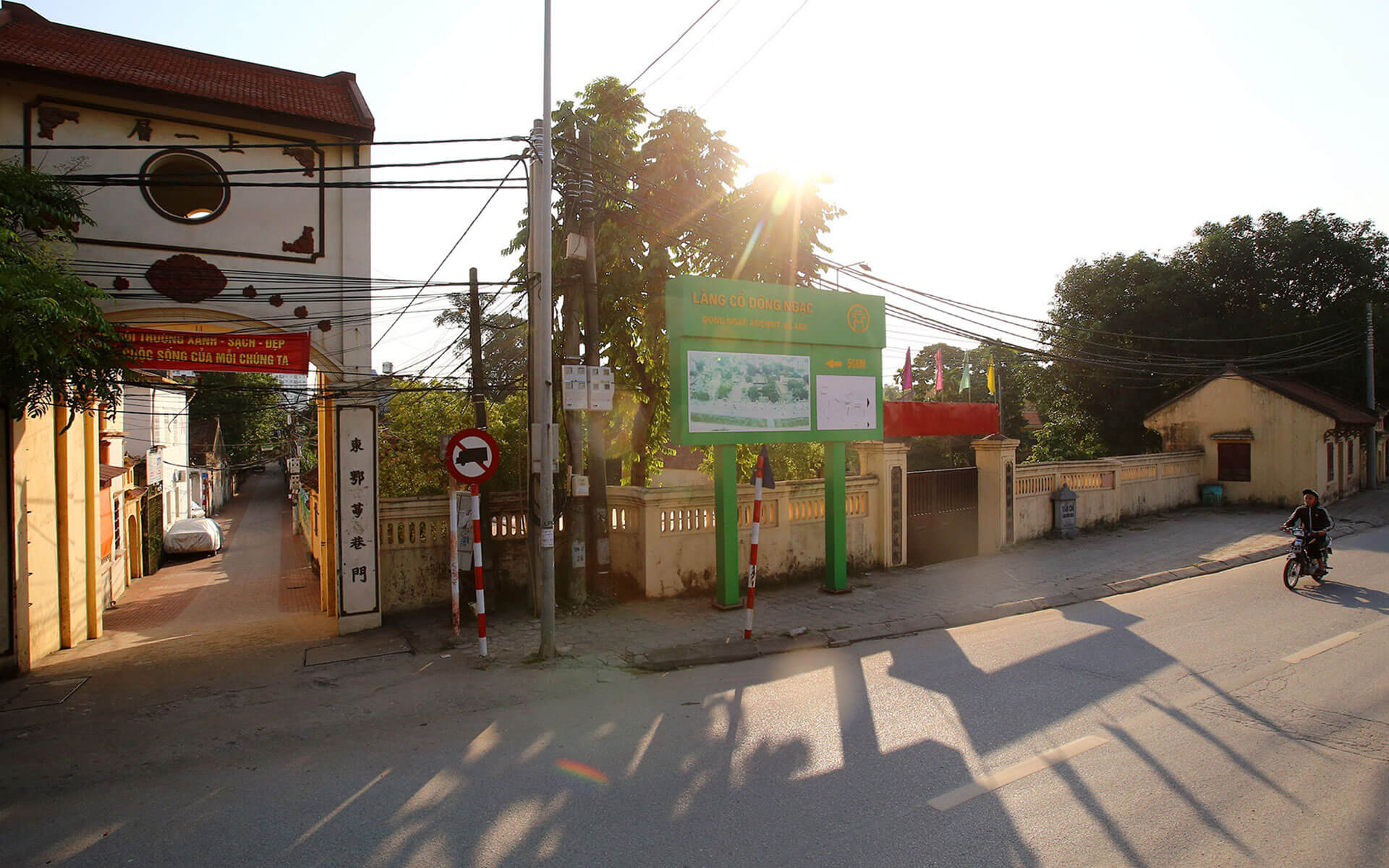 The establishment of Dong Ngac Village was closely linked to the development of Thang Long Imperial Citadel. It was a place producing an unusually large number of academic high achievers despite being tiny village in size and home to 1,000 or so people.

From the Tran dynasty to the Nguyen dynasty; Dong Ngac Village had 31 people who passed doctorate at different levels and over 400 bachelors. Pham, Phan, Nguyen, Do, Hoang are the 5 major academic families of Dong Ngac Village. 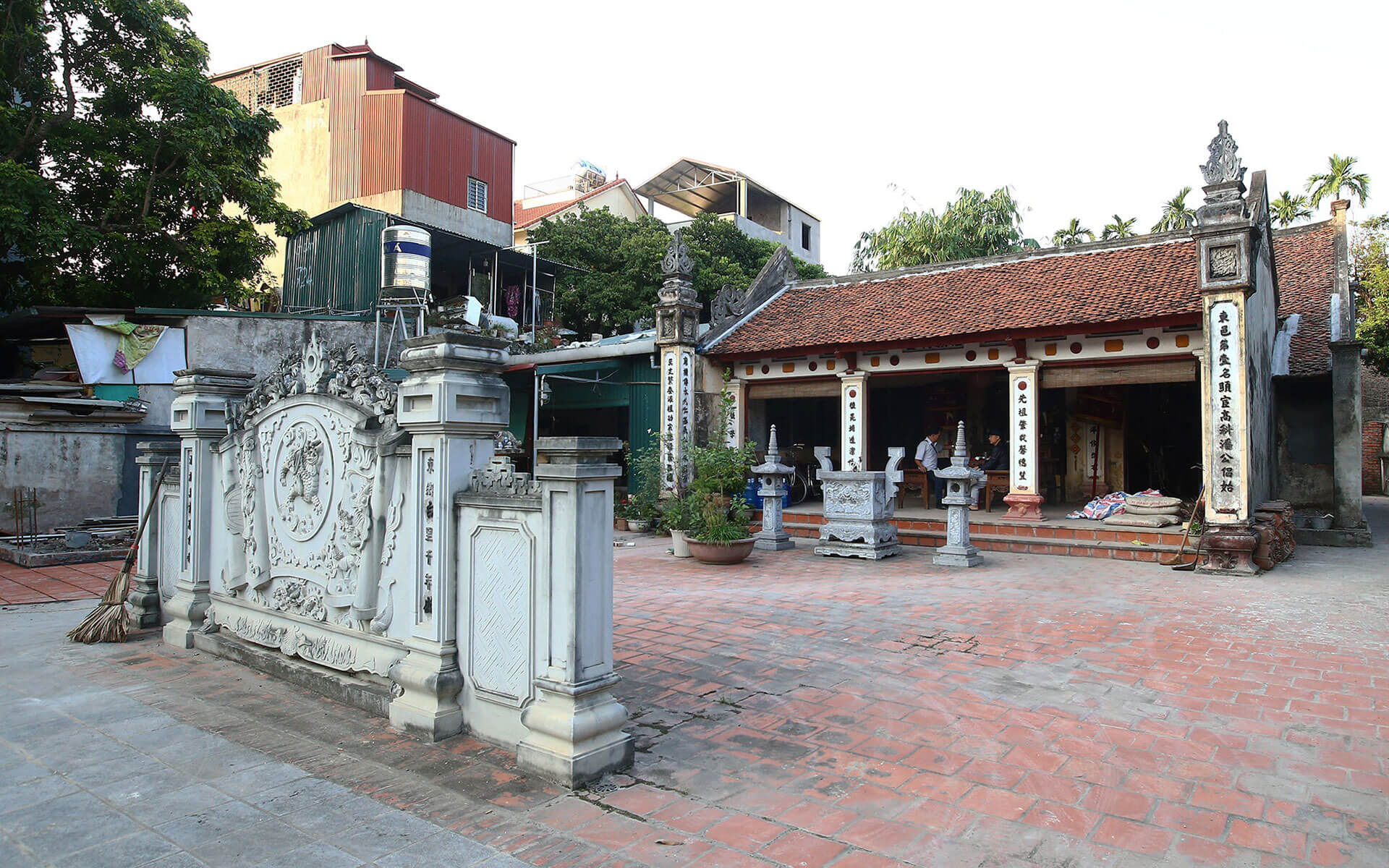 Located on an area of hundreds of square meters, the ancestral house belonging to Phan families is dated back to 420 years

Phan Phu Tien was the first person who created a glorious tradition for the academic department of Dong Ngac Village in the past. Closer to the present, the village had Pham Gia Khiem as Vietnam’s deputy prime minister from 1997 to 2011; and Hoang Tang Bi – a revered writer and social activist in the early 1900s.

Nowadays, Dong Ngac villagers still have a very high family spirit. On each anniversary, all members of each family will gather despite of busy works. Each family keeps encouraging their children in studying harder to get high result which will get well with the noble name of their village.

Hanoi has expanded and developed rapidly since 2000; and as a result, many of its oldest villages have either been erased or gentrified to the point they have lost their original style and tradition. Luckily, urbanization has not touched this ancient village; and this is part of what makes Dong Ngac so appealing when you travel here.

Walking through the village’s gate; stepping on the roads with the slanting bricks between two rows of ancient tiled low-roofed houses, you will definitely feel “the old village in the city”. 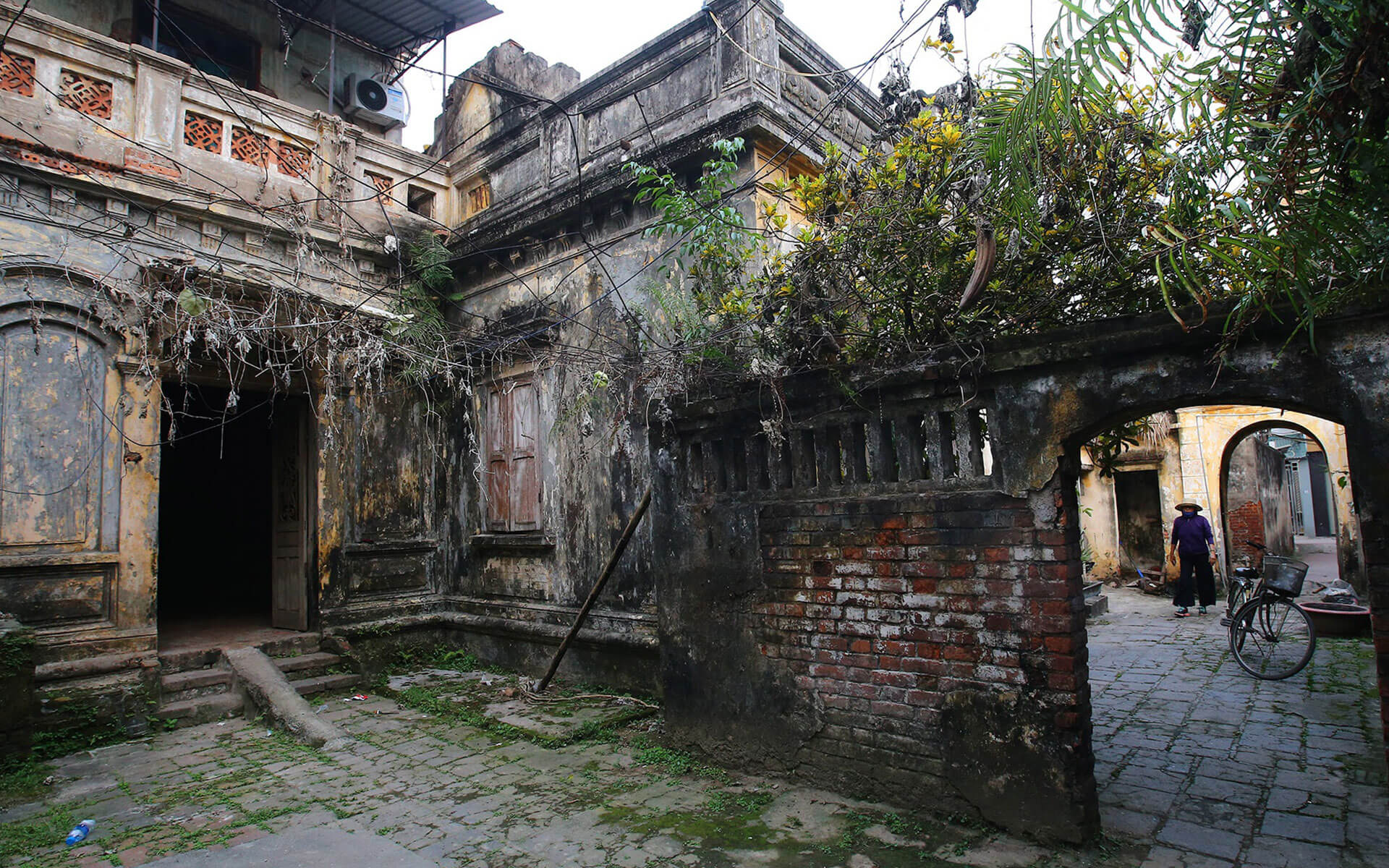 Dong Ngac Village now has about 150 old houses with the age of over 100 years; which has been touched by time, but their cultural value remains. They were built in 3 or 5-compartment houses with low floors and roofs shakes down on 4 sides.

Symbols of books are carved into the old gates that sit at each end of its four hamlets, showing the village’s literary tradition.

Dong Ngac Communal House is the solemn place of the village for almost 400 years where has hosted the most significant events and acted as a place of worship for the locals to pray to Buddhist gods and to remember the academics who built Dong Ngac’s lofty reputation. 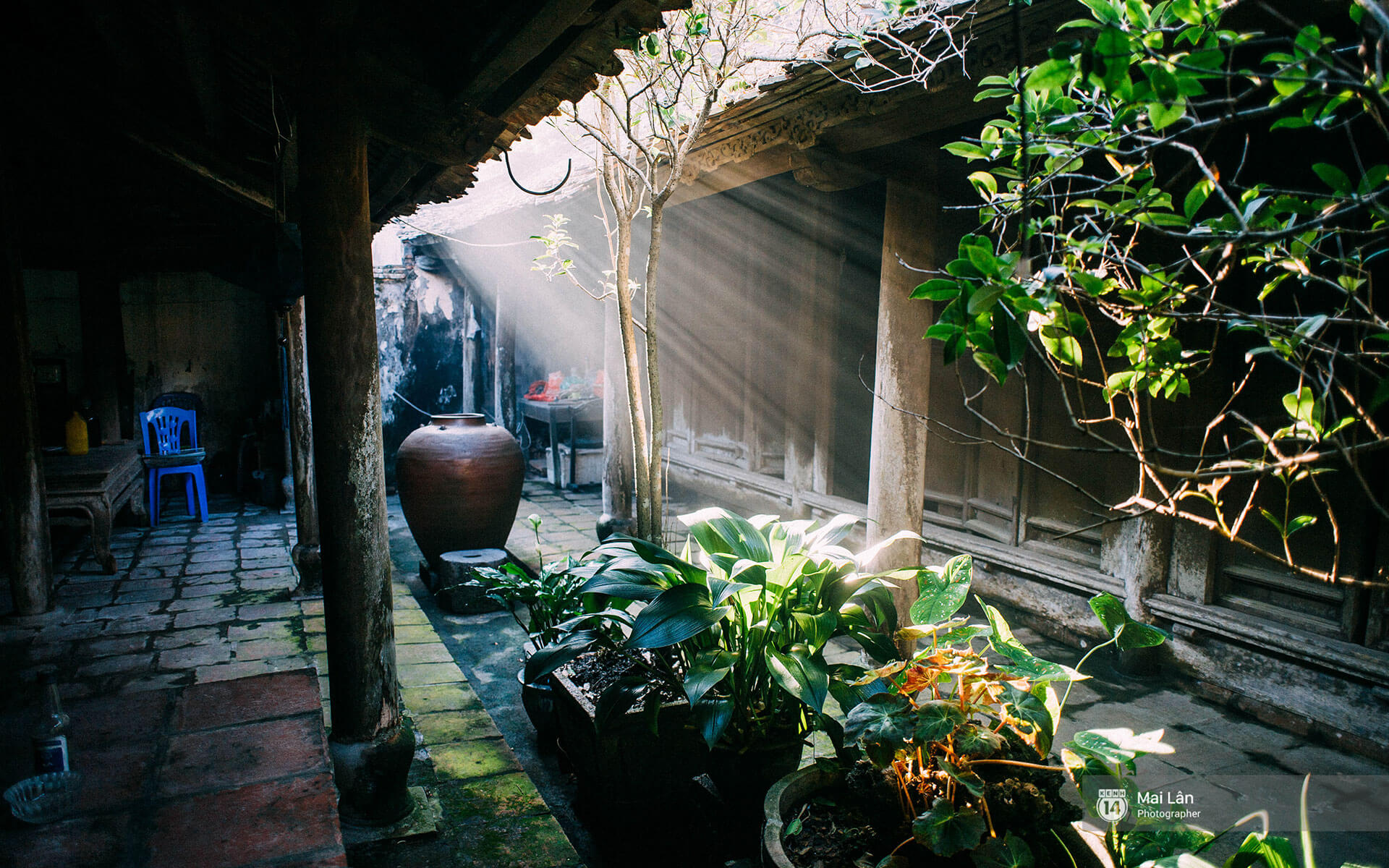 The design of the Communal House looks like the head of a dragon from above while its ironwood prayer hall was intended to represent the dragon’s skull; with the main gate being dragon’s nose and two water wells acting as dragon’s eyes.

Most ancestral houses in the village have parallel sentences written in Chinese characters showing the importance of study and acquiring further knowledge to younger generation.

Together with an impression of the feudal era by architecture; Dong Ngac Village has a blend of the Asian-European mixture with the typical sample of the Dong Ngac B primary school with small huts painted yellow. More dragon shape soaring, lotus are still carved on the wall, the roof of this school and curved in the traditional style. 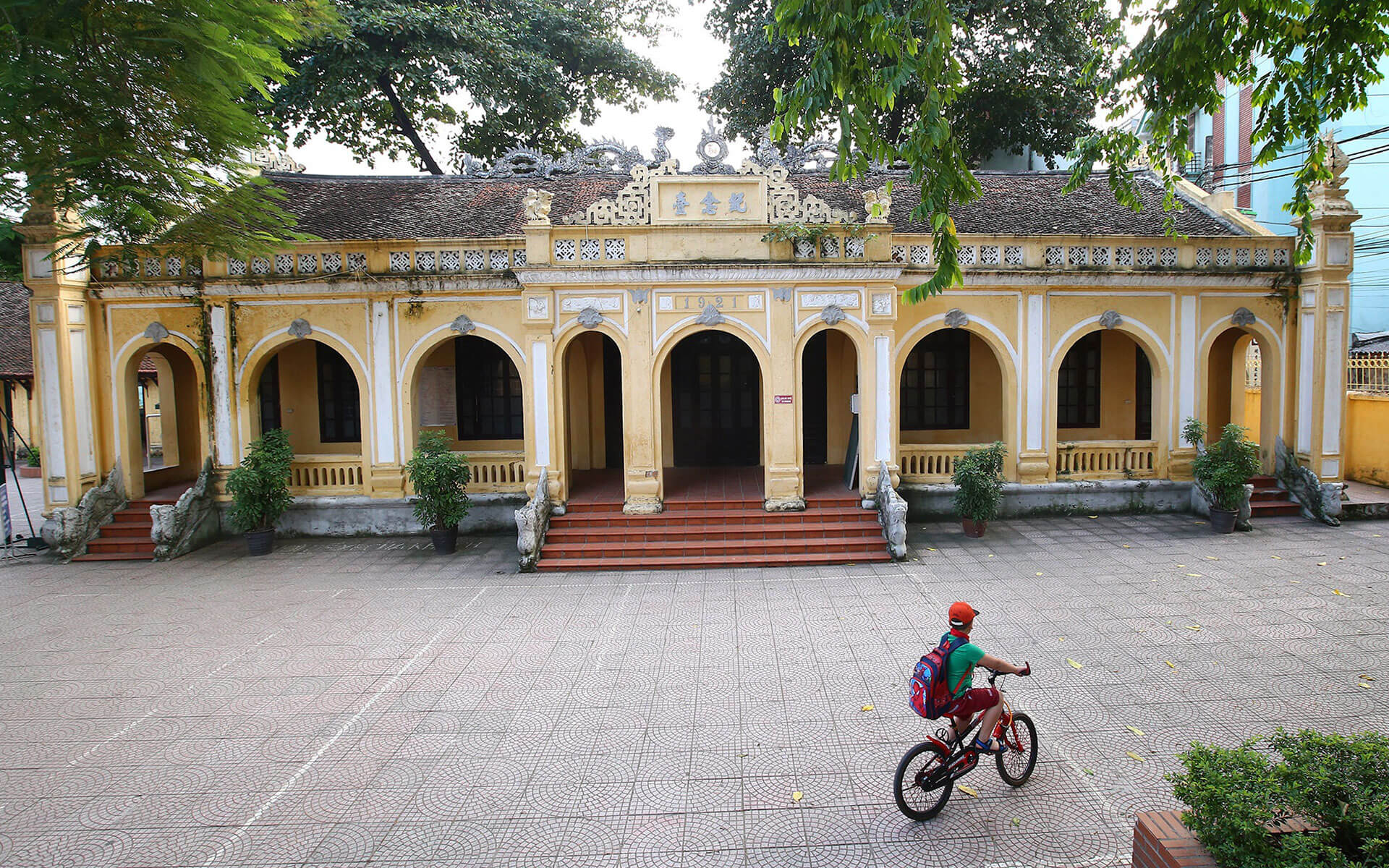 In addition, the cultural values and ancient architecture are also seen at old temples and pagodas in the village. Among of these are Tu Khanh pagoda dated from the 1650s; which is filled with gardens, shaded courtyards and stately pavilions.

Most of the temple and pagoda’s buildings were built from dark-colored ironwood; with intricately-carved eaves sitting beneath steep roofs topped by terracotta tiles.

One of the first attractions you can see inside the pagoda is a stone statue of a crane standing on the back of a turtle; which is the symbol of the longevity and wisdom. This statue is one of more than 50 stone and metal monuments scattered throughout the temple; including another 3 large brass bells which were casted in the early 19th century and a cluster of steles dedicating to Buddhist gods and the academics born in Dong Ngac.

Today there are many houses built in the beautiful villa styles but still retain the old dwarf huts. Stone lions, ancient wells are still kept in the new houses. 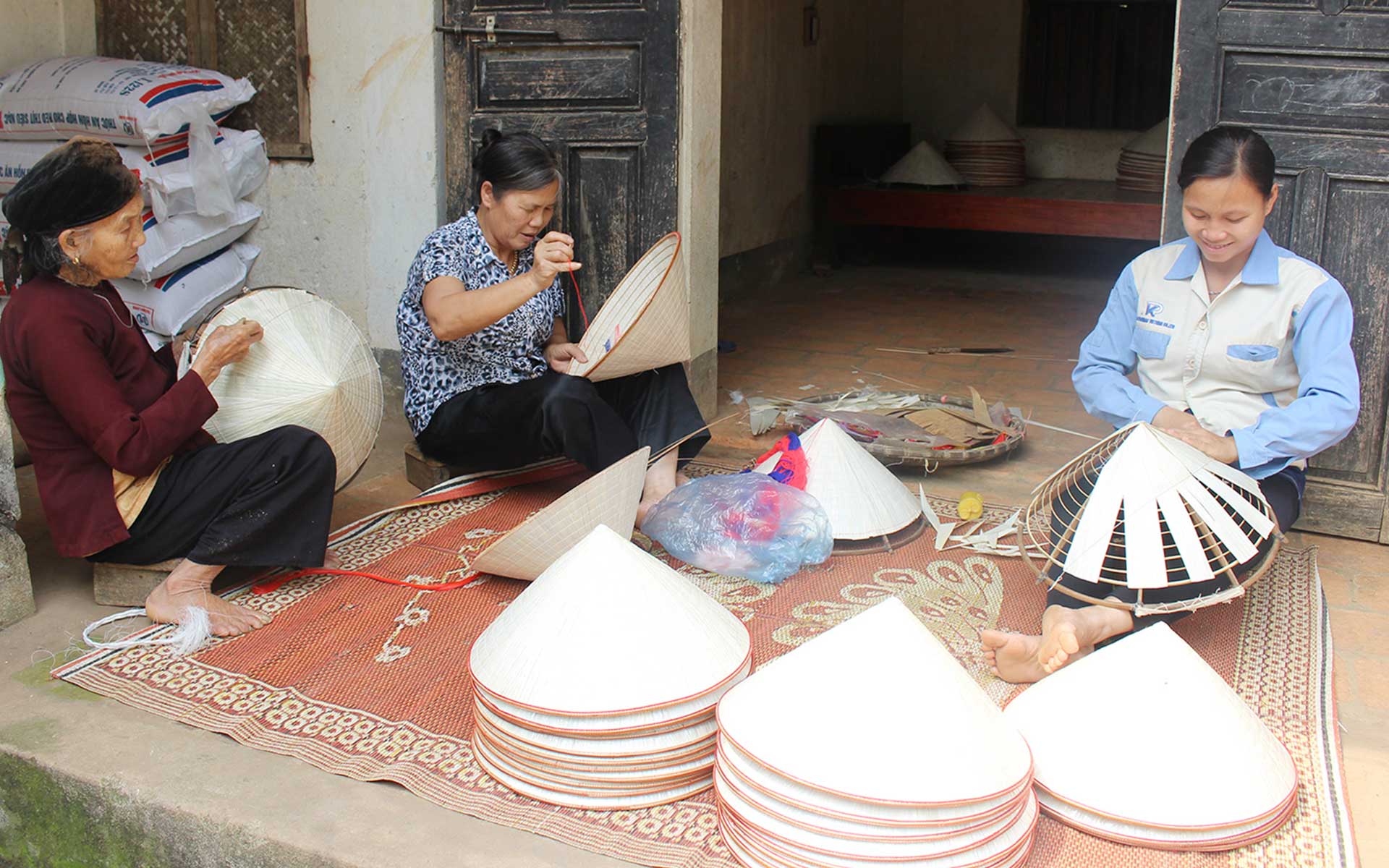 As a transit point of the trade between the mountain area and the city; Dong Ngac Village has many handicrafts which serve the needs of people both rural and urban; including brick and tile making, lacquer, dyed brown fabric; earthenware pots making, rattan making, seagrass chairs; leaf blower and blower of bamboo knitting, and hat of bamboo knitting.

4. Things to do in and around Dong Ngac Village 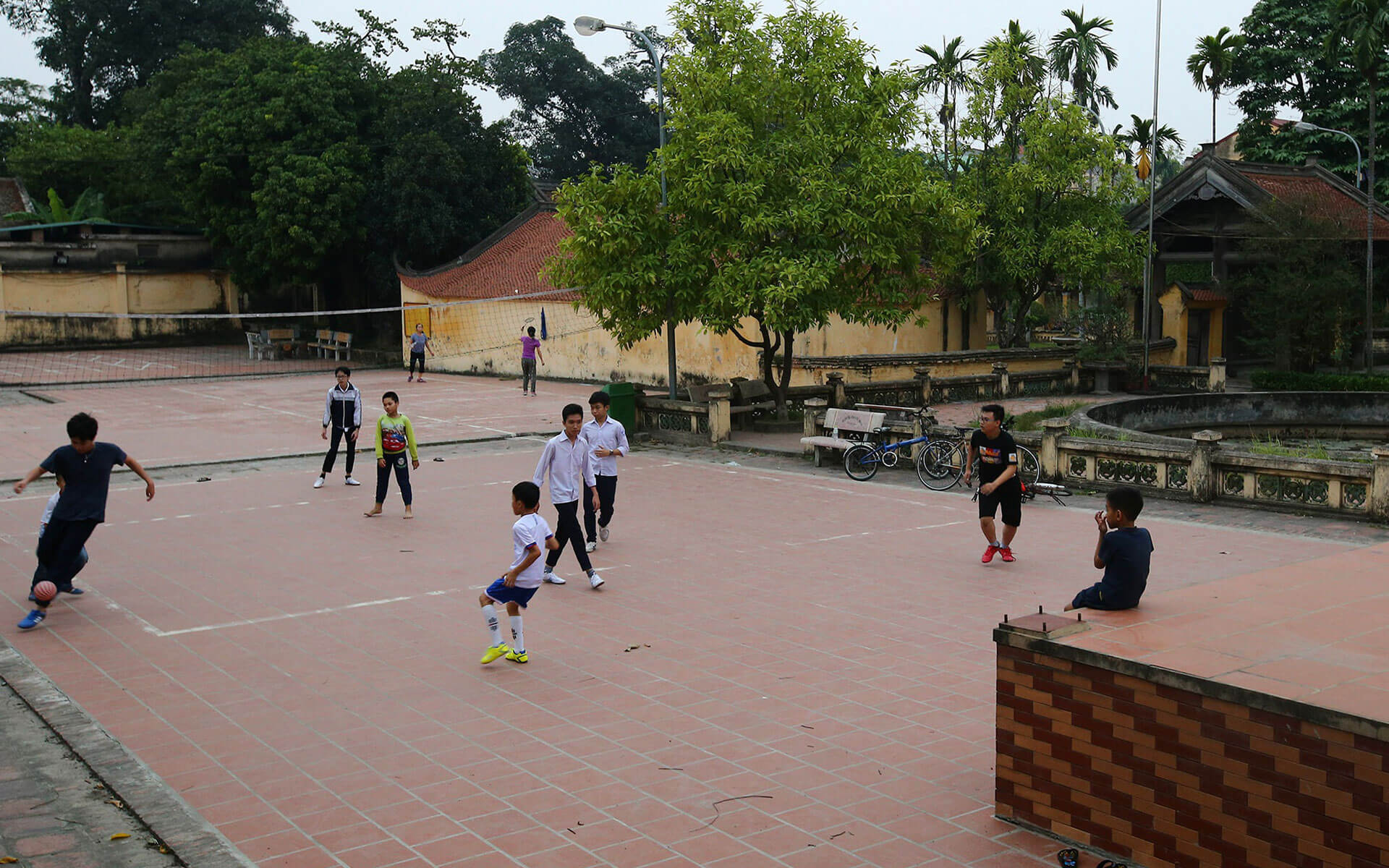 The locals still keep their rustic lifestyle and friendliness

If you visit Dong Ngac Village; there are many things for you to explore in a half or full day such as visit a local market; interactive cooking demonstration; enjoy lunch and have a cup of Vietnamese tea with the local; relax in the courtyard; bike around vegetable and flower garden; join farming activity or visit local family making tofu… Moreover, this ancient village can be connected with other popular relics of Hanoi along the Red River dike such as Chem Pagoda; Nhat Tan Temple; Lakeside temple of the West Lake etc.

The village is just about 30 minutes away by drive from the Old Quarter of Hanoi; you can easily reach the village by bus, motorbike or taxis. However, private car/ van with experienced tour guide are good choice for a hassle-free tour and better knowledge about the culture of Vietnam and the village. 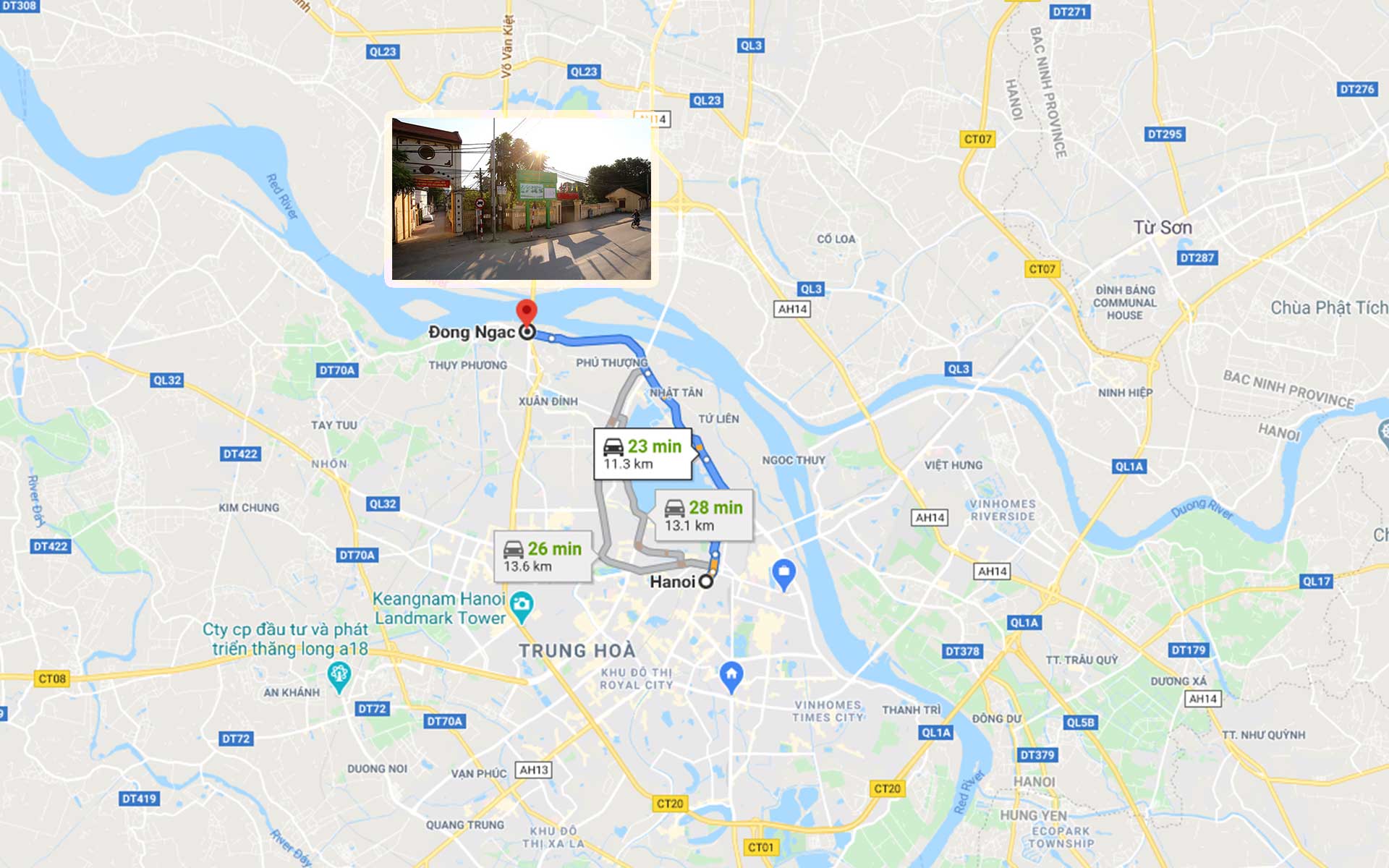 For around 30mins by motorbike, taxis or private vehicles, you can easily reach Dong Ngac village & immerse yourself into the world of peaceful atmosphere, its architecture, handicrafts, and the friendliness of the locals

There is no greater pleasure than walking into a completely different place of quiet; peaceful and quaint atmosphere, escape from the bustle and hustle of the city; and discover Vietnamese unique values. Vietnam Travel team are ready to bring you a trip with good memory! 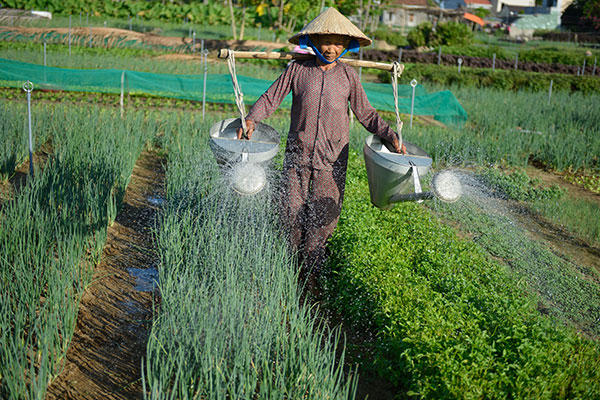 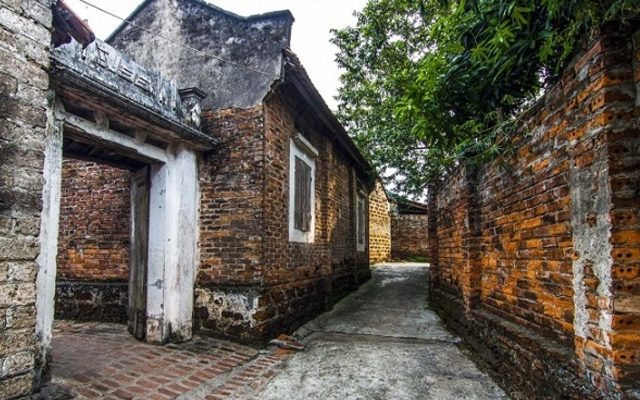 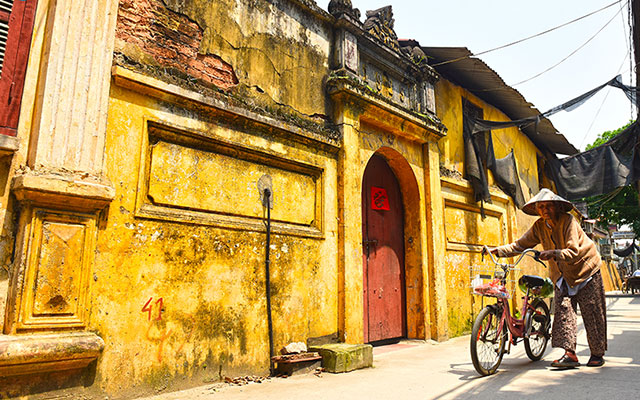 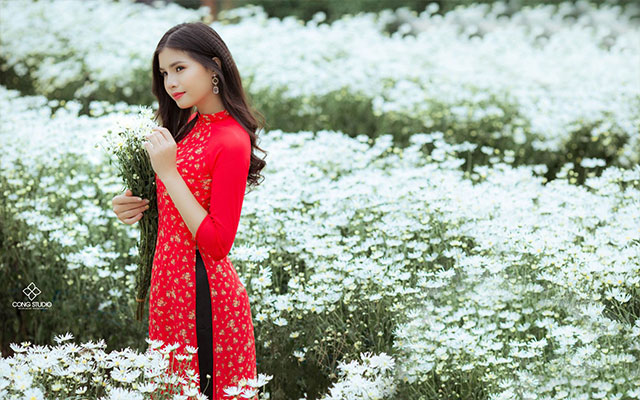 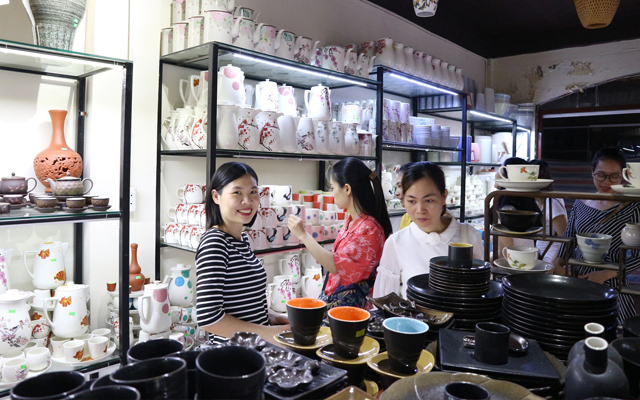 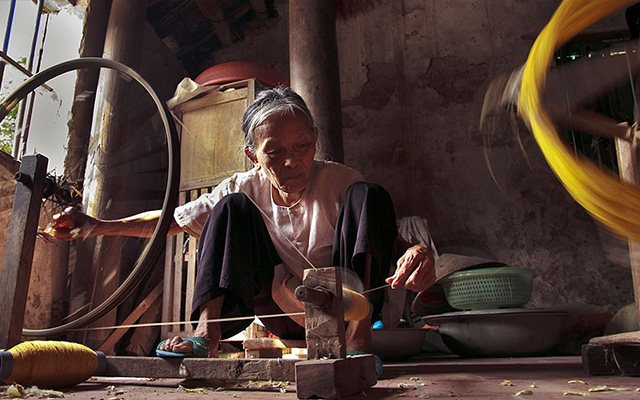