My Son Holy land, How to get there?

On the way to explore Danang and Hoian, tourists often choose to visit Marble Mountains, Linh Ung Pagoda, Bana Hills, Hoian Ancient Town and popular beaches such as My Khe Beach, Cua Dai or An Bang Beach. Besides these places, My Son Holy land can’t be missed for those who are interested in culture and history of Cham people while they are in Danang and Hoian. If Hoian enchants tourists by colorful lanterns along downtown streets by night, Da Nang city is lit up brilliantly by colorful lights of bridges, buildings and civil houses. Charming red towers in My Son surely amaze tourists in the sunset with the story about the religious and political capital of the Champa Kingdom for the most of its existence. 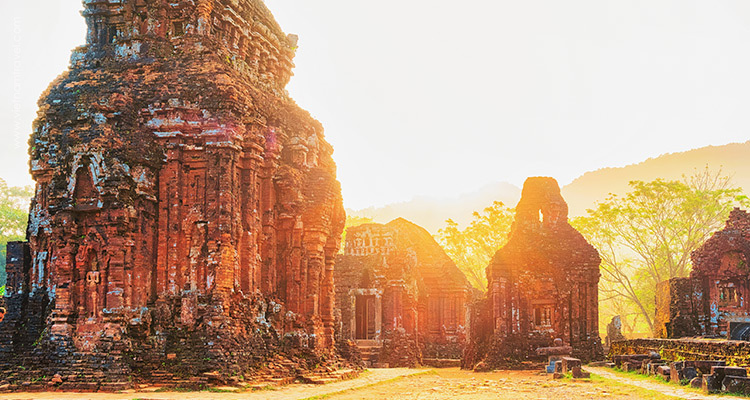 Sunrise  at My Son Holy temple

Between the 4th to 13th centuries, there was a unique culture developed on the coast of contemporary Vietnam, owing its spiritual origins to the Indian Hinduism. This is demonstrated by the remains of a series of impressive tower-temples located in a dramatic site of My Son Holy Land, which was the religious and political capital of the Cham Pa Kingdom for most of its existence.
Through stone stele and royal dynasties, My Son was proven to be the most important Holy Land of the Cham people during the mentioned centuries, reflecting their style and history.

The Cham people belong to an ethnic group in Southeast Asia. They formed the core of the Muslim communities in both Cambodia and Vietnam. Cham is a remnant of the Cham Pa Kingdom (7th to 15th centuries), closely related to the Malay race.

The property is located in the mountainous border Duy Xuyen District of Quang Nam Province, around 75km from Hoian, 69km southwest of Da Nang city and 150km from Hue. It is surrounded by a ring of mountains, which provides the watershed for the Thu Bon river of Hoian. The location gives the sites its strategic importance as it is also easily defensible.

My Son used to be a group of more than 70 structures (mainly temples and towers) built by Cham Kings to commemorate important events during their reign. After the Champa Kingdom was defeated, the temples were abandoned among lush nature until 1903, when Henri Parmentier – a French archeologist, and his team began an excavation of the site.

During the excavation, Henri organized the complex of My Son into 14 sections according to the alphabet. For better orientation, every temple has its own number within a group, for example A1, A2, B1, B2…. Currently, sections A – G are the easiest areas to access thanks to the walking paths.

In 1999, My Son was honorably recognized as a World Heritage Site by UNESCO with two criterions:

Situated inside the 2-kilometer wide valley in Quang Nam province, the My Son Sanctuary temple complex used to be the central praying and worshiping ceremony place of Cham Pa reigns. It was considered as the tool to assist the reigns to contact with God and Saints. The land accordingly becomes the significant religious and cultural center of Cham Pa reigns.

The ruins of My Son are not as grand and impressive as those of Angkor Wat in Cambodia. However, the site was inhabited from the 4th to the 15th century AD, far longer than any of the other Indian-influenced sites in the region including the famous sites of Angkor Wat in Cambodia, Borobudur in Indonesia, Bagan in Myanmar, or Ayutthaya in Thailand. 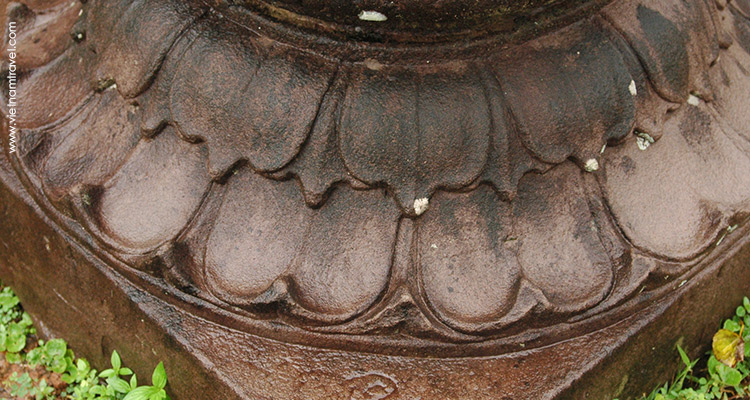 According to records on the stone stele, the initial foundation of the ancient My Son architectural complex was a wooden temple to worship the Siva Bhadreshwara genie but this temple was destroyed by a big fire in the late 16th century. After that, the next structures were built with red bricks by the kings of the Champa Kingdom.

My Son used to be a group of more than 70 structures including temples and towers that connect to each other with complicated red brick designs. The main component of the Cham architectural design is the tower, built to reflect the divinity of the king. Bricks are main material for the construction of the Cham Towers. Each historical period has its own identity so that each temple worshiping a genie or a king of a different dynasty has its own architectural style of different impressions. Most of the temples point to the East, the sun direction because Champa people believed that the East was the place where the gods lived.

All of the Cham towers were built on a quad-rate foundations and each comprises three parts: a solid tower base, representing the world of human beings, the mysterious and sacred tower body, representing the world of spirits, and the tower top built in the shape of a man offering flowers and fruits or of trees, birds, animals, etc., representing things that are close to the spirits and human beings. My Son sanctuary is truly a vivid proof reflecting Cham-style architecture which is much influenced by India style.

The architectural art of the Cham towers at My Son Sanctuary is the convergence of different styles, including the continuity of the ancient style in the 7th-8th centuries, the Hoa Lai style of the 8th-9th centuries, the Dong Duong style from the mid-9th century, My Son and My Son-Binh Dinh styles, etc. 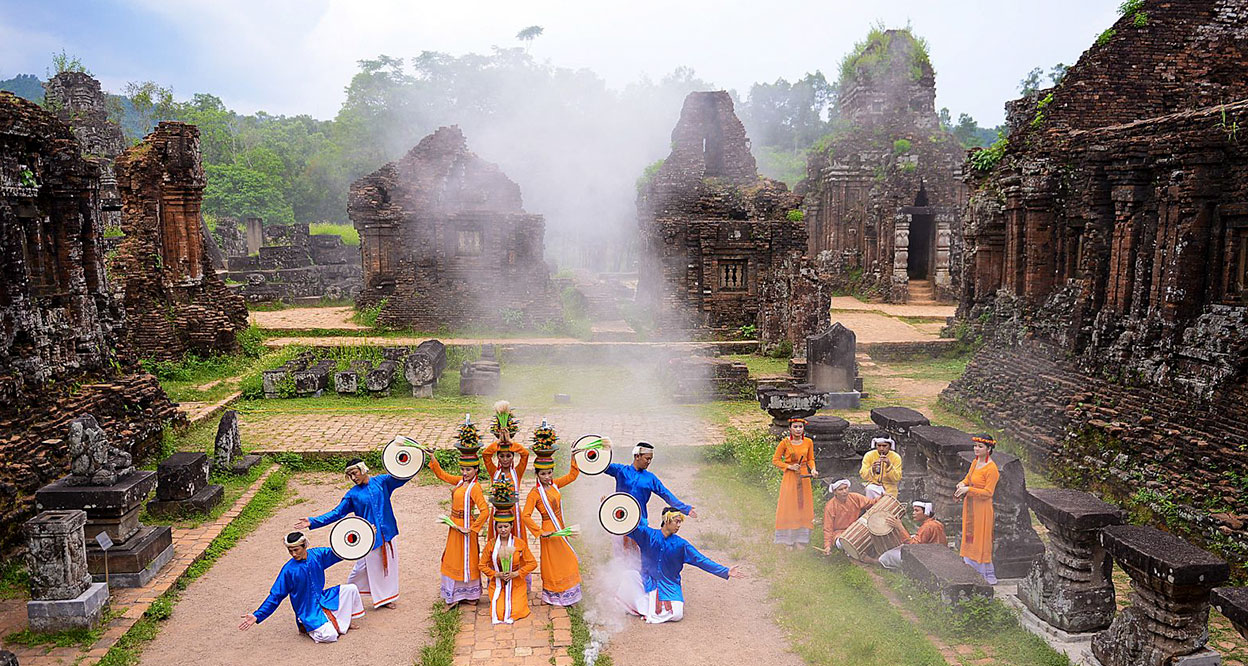 However, it has yet been unable to figure out the reasonable explanation how and by what kind of substance Cham people could stick red baked bricks together to form such solid structures. High shrine towers with double pillars, solid walls, elaborate carvings and striking sculptures, all reflect the exclusive beauty of Cham culture.

Although many towers have been destroyed by the time and the wars, the remaining sculptural and architectural remnants still reflect the style and history of the art of the Cham people. Their masterpieces mark a glorious time for the architecture and culture of the Cham, as well as of Southeast Asia. They are also vivid proof, confirming the history of a nationality living within the Vietnamese community boasting of a rich cultural tradition. 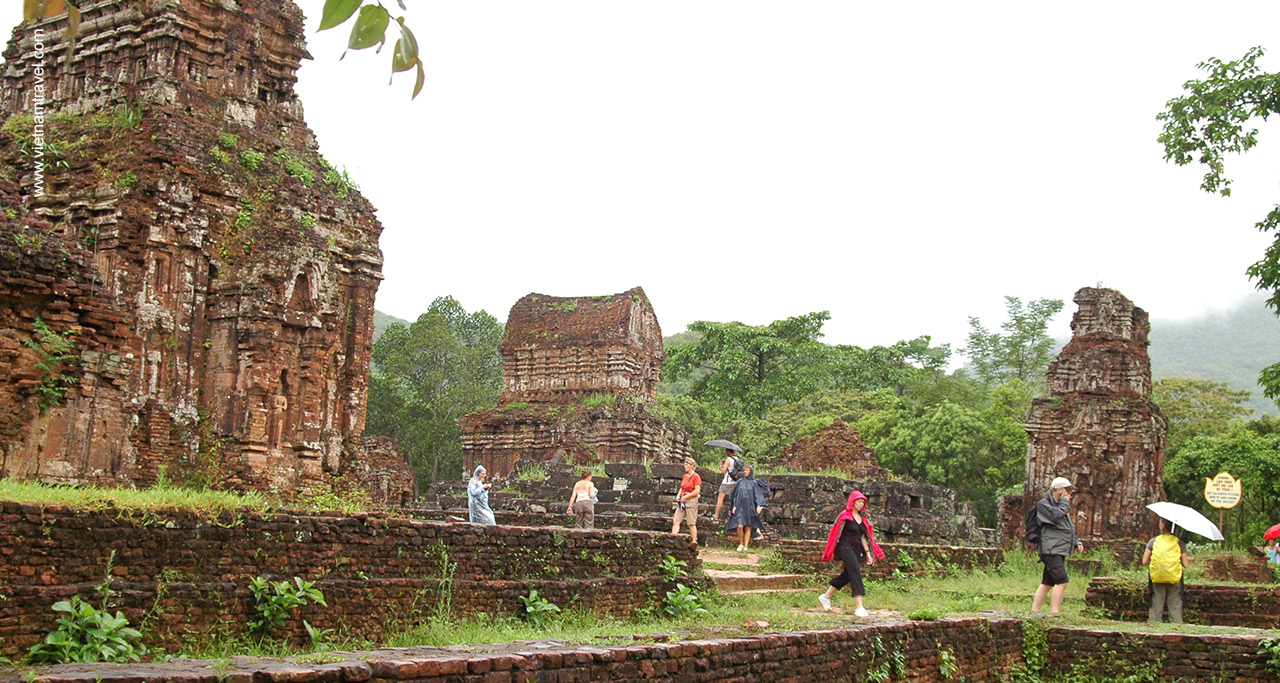 How to Get to My Son Holy land?

Taxi is the fastest transportation to go from Da Nang or Hoian to My Son but the taxi fare is quite expensive, ranging from 700,000 VND to 800,000 VND one-way. So, it may not suitable for those having a low budget.

In contrast with taxi, bus is the cheapest means of transportation. But the drawback is that the waiting time for a bus is quite long. Thus, you need to be very patient. The right bus leading you to My Son is bus number 06, which departs from Da Nang Central Bus Station directly to My Son. The price is between 8,000 VND to 30,000 VND.\

This means of transportation is suitable for adventurous persons loving to explore the roads in Vietnam. However, most of the road to My Son from Da Nang or Hoian was busy and dusty and not interesting. Only after reaching the point where is only 10 km left, the surroundings change a little and lead through a countryside, rice fields and nice views of the mountains.

This is the most comfortable way to discover My Son. Our driver & Local guide will wait for you at your hotel lobby, Pick you up at your convenient time and the most enjoyable visit. The private car/ Van of Vietnam Travel could stop along the way for your tea and photo opportunity.

If you want to save time and gain much experience, the best option is to book a day trip with escorted tour guide from Da Nang or Hoian to My Son with Vietnam Travel.

Best time to visit My Son?

You can visit My Son Sanctuary in the early morning, right after the gate is opened to avoid the extreme heat here, but please note that there are more and more people coming here for sunrise tours. Another option is to visit the site in the afternoon, around 2 pm, when all the tourists are gone.