Hanoi Ceramic Mosaic Mural, or Hanoi Ceramic Road (Vietnamese: Con đường Gốm sứ), is a ceramic mosaic mural built along the walls of the Red River dike system in Hanoi Capital, northern Vietnam. In other words, it stays on the Eastern boundary of the city centre, within walking distance of most hotels known to casual travelers.

With a length of about 3.85 kilometres (6,950m2), the ‘Ceramic Road’ is one of the major projects that were developed on the occasion to celebrate the Millennial Anniversary of Hanoi in October 2010. 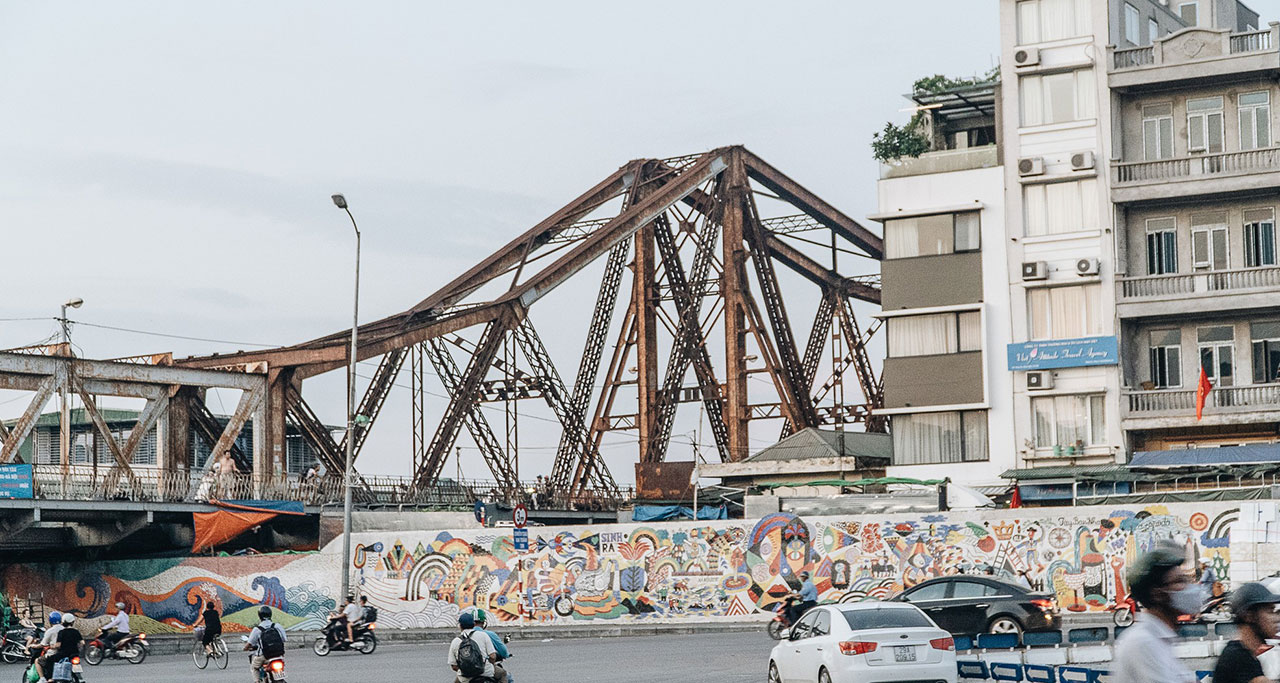 The concept of the Ceramic Road was first developed by Vietnamese journalist Nguyen Thu Thuy in March 2007. She won a prize in the Hanoi architecture contest for her idea of transforming the dike system around Hanoi Capital into a ceramic mosaic. She wanted to mark the city’s millennium with an artistic mural which reinvigorated urban Hanoi and brought local communities together through public art.

With the support of the Hanoi’s People Committee, the project began on the mural in 2007 and involved 35 professional artists from Vietnam and from 10 countries including Denmark, France, Holland, Spain, Italy, Britain, America, Argentina, New Zealand and Australia. In addition, over 100 artisans from traditional ceramic villages in Vietnam joined the project and were supported by 500 Vietnamese and international children, and students from fine arts colleges throughout Vietnam. Foreign embassies and culture centres in Hanoi are also participated in the consultation process such as the Goethe-Institut, Alliance française L’espace, British Council, Società Dante Alighieri Dalte Centre, and other cultural centres of Russia and South Korea. 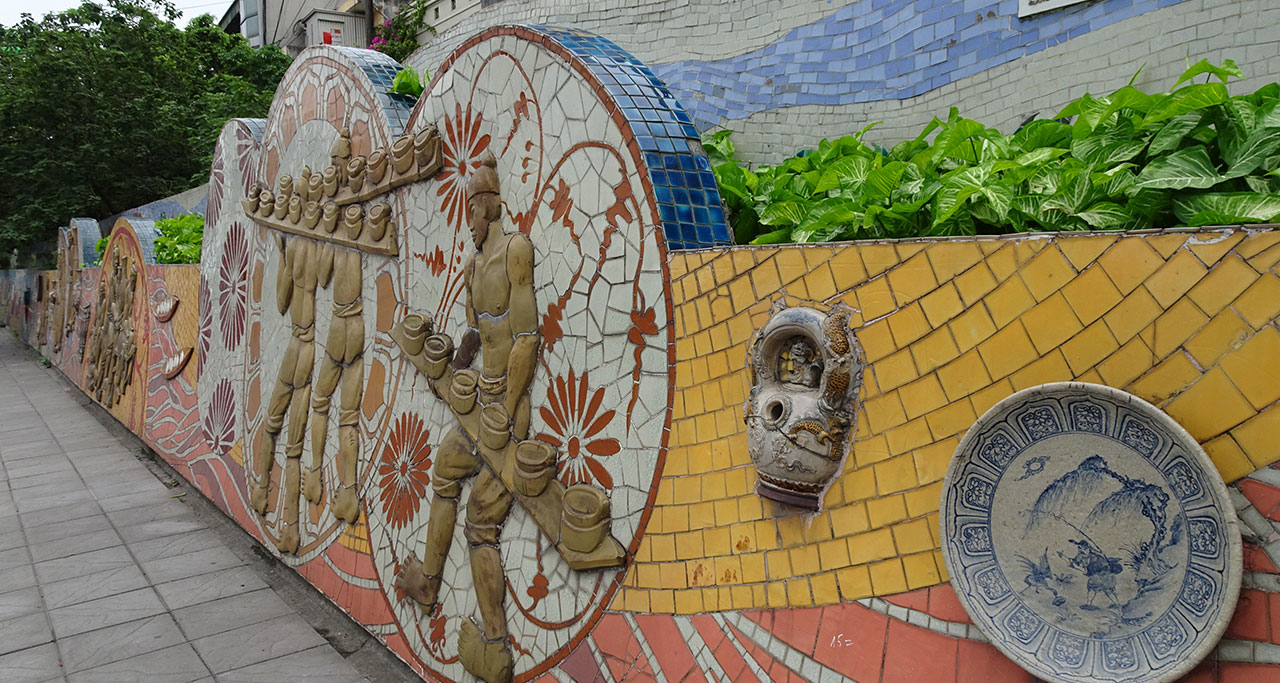 On 5th October 2010, Guinness World Records adjudicator, Beatriz Fernandez, undertook an official review of the Hanoi Ceramic Mosaic to confirm its dimensions and ensure the strict guidelines relating to the record had been followed. Ms. Fernandez confirmed that at 3,850m linear meters (6.950m2) of the Hanoi Ceramic Mosaic Mural was the world’s largest ceramic mosaic and awarded a Guinness World Records certificate. The dyke along the Red River is 6km inside Hanoi centre and the ceramic mosaic mural is nearly 4km long. 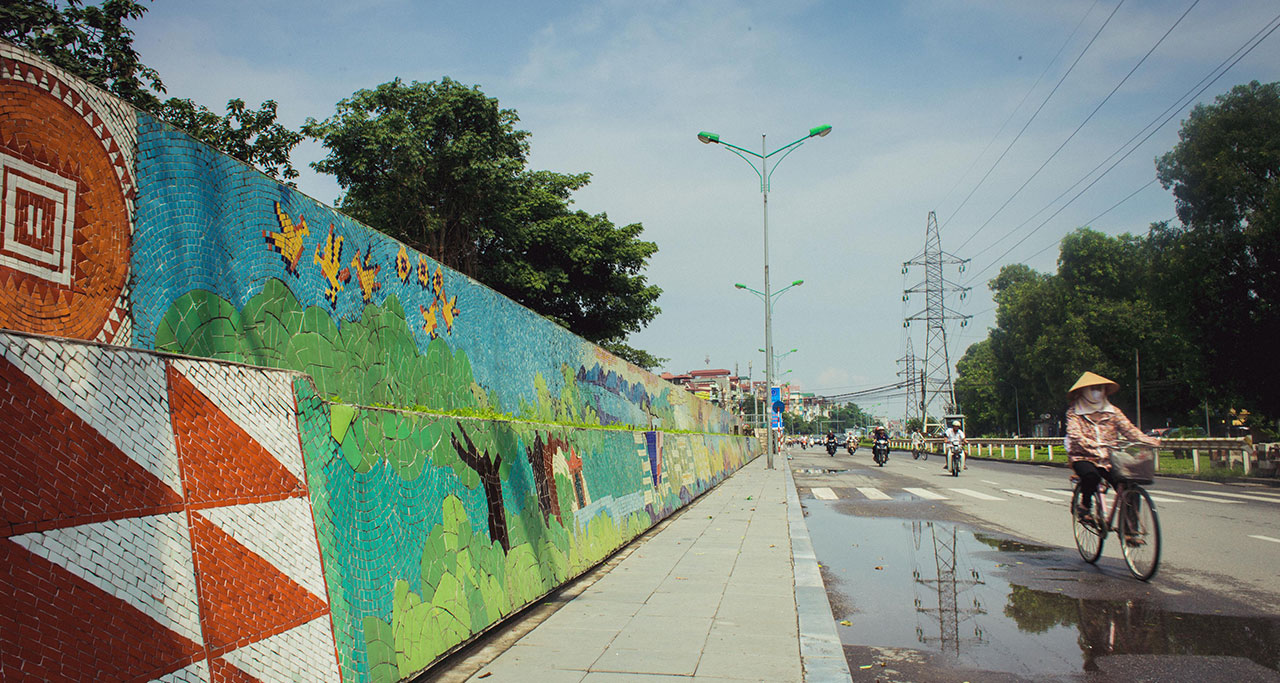 Each artist has brought their own creative ideas and techniques to the mural, and expressed these using ceramic tiles measuring just 3x3cm. Each meter square contains 1000 of these tiny tiles.
The ceramic mural runs along the road of Âu Cơ, Nghi Tàm, Yên Phụ, Trần Nhật Duật, Trần Quang Khải, Trần Khánh Dư and terminates at the pier of the Long Biên Bridge. The main material used to create mosaic mural was ceramic tesserae, a type of tile used in the mosaic which is made from the Bat Trang village. People may be familiar with using ceramic to decorate houses, social constructions, and the art of using ceramic have been popular by its endurance. Therefore, the idea of using ceramic to create a mosaic mural seems strange and distinctive. But it became into Hanoi ceramic mosaic mural – the first public collective artwork in Vietnam. Obviously, we can recognize that the technique of mosaic has been the best evidence for the project, as it has an ability to connect many crucial things – the tradition of local ceramics, excellent durability and exceptional expressive potential. 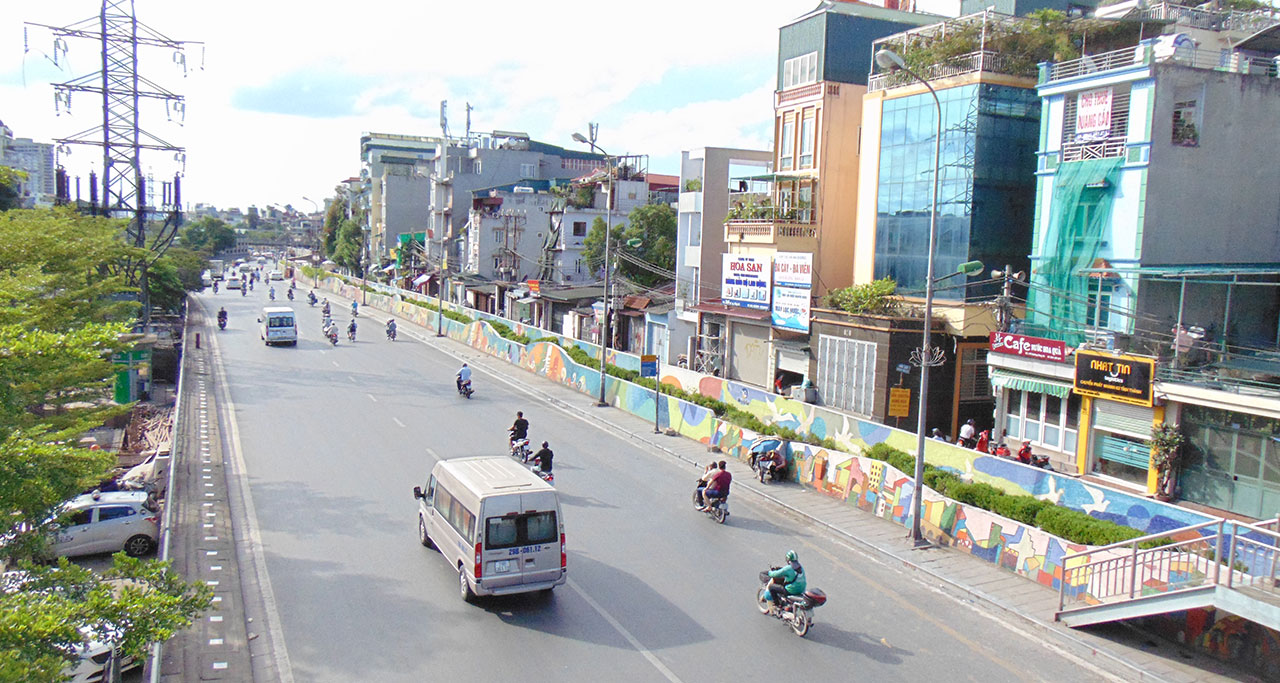 This public artwork reflects Vietnamese culture and history. The mosaic mural was divided into 21 sections and portrays of the different decorating styles throughout the flow of Vietnamese history, which have considered as a visual narrative of country’s history and harmonized to fit Vietnam’s eclectic cultural identity. The ceramic mosaic mural represented the decorative pattern from different periods in the long historic flow, such as Phung Nguyen and Dong Son culture, the myriad of the dynasty as Ly, Tran, Le, Nguyen. Also incorporated on the wall follow the traditional architectural designs of Vietnam’s 54 ethnic groups, performed by modern delicate artworks and paintings of Hanoi and children’s drawings also. 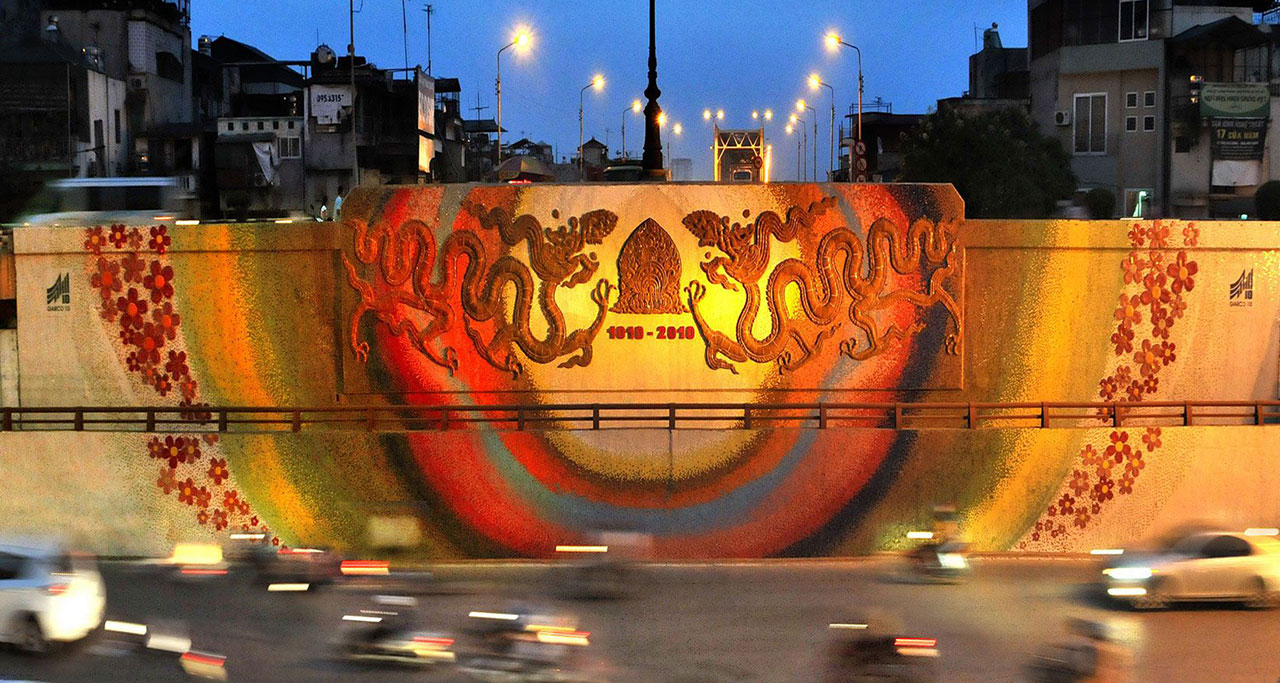 Part A1: a mural of the historical period from the era of Dong Son to dynasties of Ly, Tran, Nguyen, Le.
Part A2: a mural of 54 ethnic groups of Vietnam.
Part A3: the theme of a peaceful Hanoi inspired children’s drawings.
Part A4 to A9: performance of modern arts of Vietnamese and foreign artists.

From its inauguration, the ceramic mosaic road contributed to bring a new appearance for Hanoi Capital. Instead of the boring grey concrete road-trip along the Red River, people can travel with joy and contentment while looking at the well-designed walls on the road. The mural reflects the Vietnamese culture & history, transmits the hope for a better future. Therefore, this channel fence stands out and inspires for its spectators.

Together with Vietnam Travel’s local tour guide, tourists can bike or stroll along the Hanoi Ceramic Mosaic Road, stop at any time you want to listen about Vietnam’s history and culture via beautiful mosaic pictures.

From there, your journey can continue to visit the most highlights in Hanoi City Tour: Long Bien Historic Bridge; West Lake including Quan Thanh Temple and Tran Quoc Pagoda.