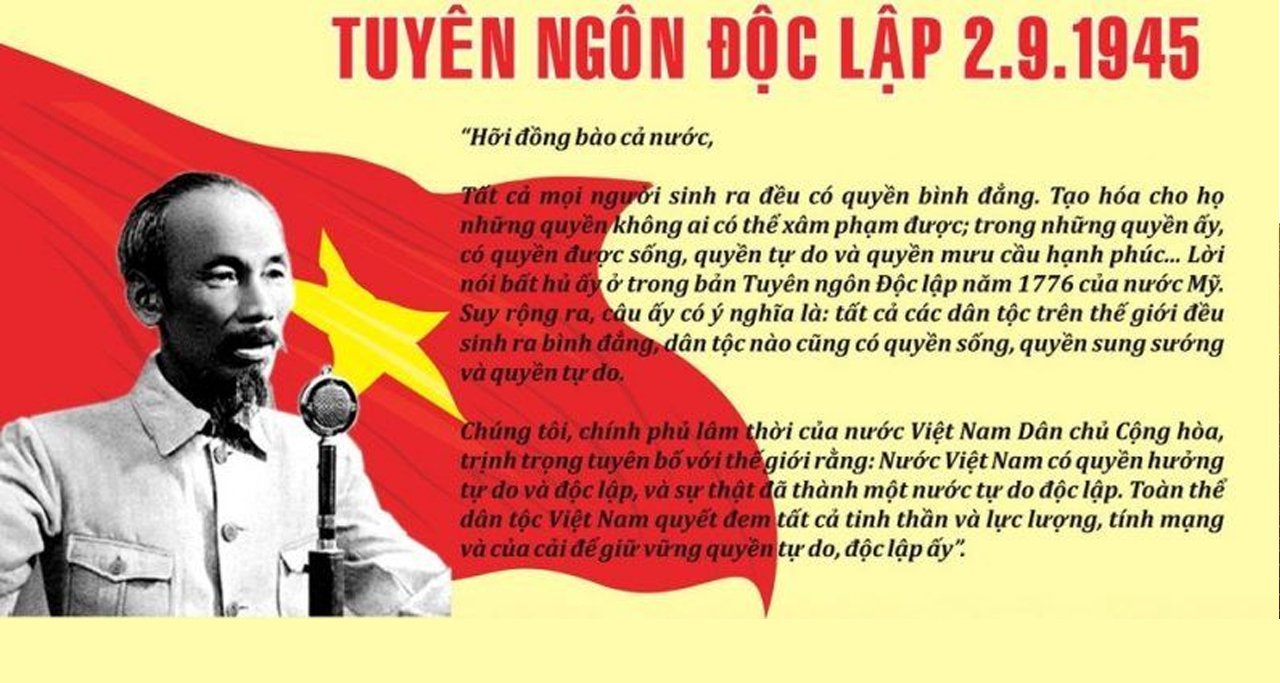 The Vietnamese flag is identified by its people and the global community today predates a unified and independent Vietnam. It first appeared in the southern uprising (Nam Kỳ Khởi Nghĩa) on 23 November 1940, against French rule in Southern Vietnam. The Vietnamese flag was designed by Nguyen Huu Tien (Nguyễn Hữu Tiến), a leader of the uprising who was arrested by the French in advance of the failed uprising and executed 28 August 1941.

In 1941, the flag of Vietnam was displayed at a conference, at which the Viet Minh (a communist group) was founded by the leader Ho Chi Minh to support the locals in the war against the French colonial government. On 17 August 1945, the Viet Minh proclaimed it as the national flag of Vietnam at the meeting held in the village of Tan Trao in the North.

As World War II drew to a close, the Japanese surrendered, the Viet Minh entered Hanoi and Ho Chi Minh declared Vietnam independent and the flag became the official emblem of North Vietnam or the Democratic Republic of Vietnam on 02 September 1945. And later then, 2 September was chosen as Vietnam Independence Day, the day Vietnam was recognized as an independent nation in the world.

Meanwhile, French troops returned in October and restored colonial rules in the South. Under French sponsorship, the South of Vietnam was controlled by Southern government, officially called as the Republic of Vietnam and had its own flag with a yellow background and three horizontal red stripes in the middle.

On March 1946, the National Assembly voted to keep the Viet Minh flag and after the Geneva Accord between France and Vietnam in 1954, the Democratic Republic of Vietnam became the national government. The Vietnamese flag was modified in 1955, making the central star slightly smaller with straighter edges.

With the defeat of American and South Vietnamese forces in 1975, communists ruled the entire country and the government and flag of the South disappeared. The 1945 flag was adopted in the South when the two halves of the country were unified as the Socialist Republic of Vietnam on 02 July 1976. And today the red flag with a yellow star is used throughout Vietnam.

Vietnam is among 59 countries with star on national flags (Source: https://www.worldatlas.com/articles/country-flags-with-stars.html). Star’s meaning and symbolism on a flag is not worldwide because each country may have a specific reason for including star on flag.

2. What is Vietnam Flag Meaning? 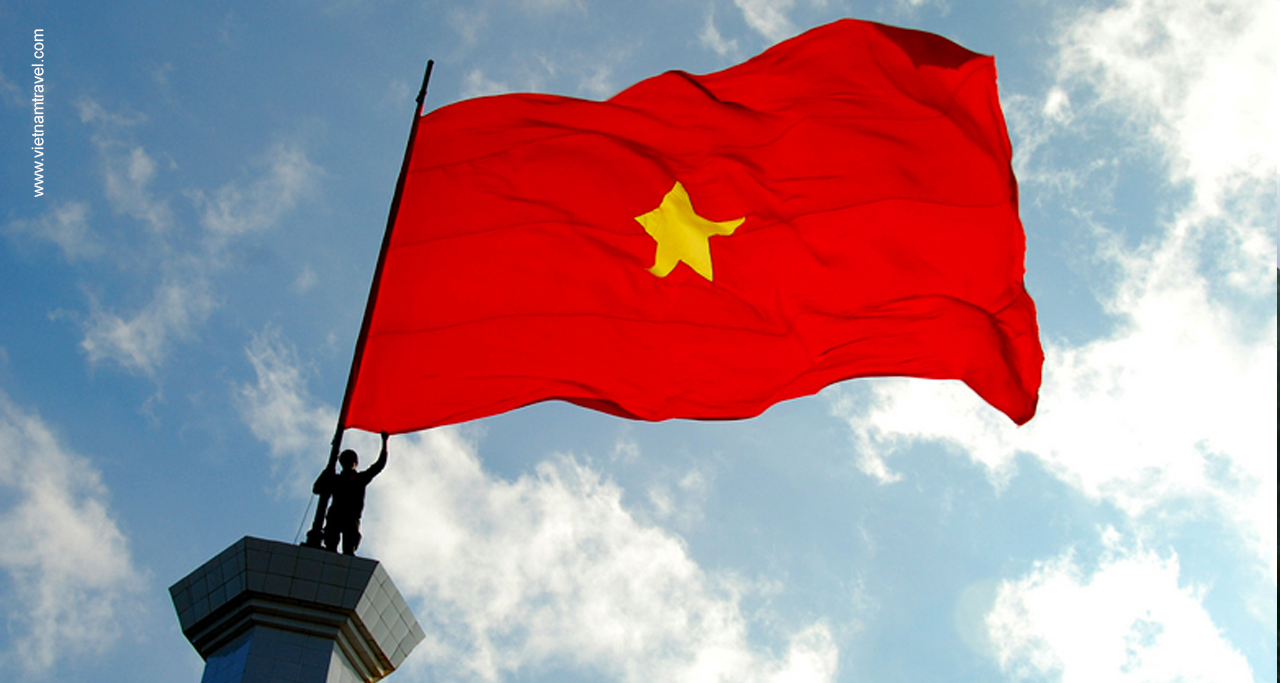 The National Flag of the Socialist Republic of Vietnam is rectangular in shape, its width is equal to two thirds of its length (the proportion is 2:3), in the middle of red background is a bright five-pointed golden star.

Vietnam flag meaning and origins can be traced all the way back to the French Revolution of 1789 when a plain red flag became the symbol of left-wing politics. Overtime the symbolism evolved and the basic color scheme was adopted by socialist and then communist causes. Since then, that red core has become a foundation for a number of communist or democratic-socialist nations such as China, North Korea, Macedonia.

What originated as a symbol of left-wing politics in 18th-century France has morphed into something much different in Vietnam today. Vietnam flag colors include red and yellow with special meanings. According to the designer Nguyen Huu Tien, the red background represents blood – a symbol of bloodshed, struggle and the success of revolution, while the yellow foreground represents “the color of our race’s skin”. The five points of the central star stands for the five principal classes composing the political front – businessmen, farmers, workers, intellectuals and military.

On every special national holidays such as Reunification Day, Independence Day, Tet Holidays and traditional festivals, locals proudly hang their Vietnamese flags right at their houses’ entrances. That’s also a meaningful way to remember the Vietnamese soldiers who sacrificed themselves in the wars to protect our country’s peace and independence.

Below is the list of Vietnam flag towers in some tourist attractions all over Vietnam. These Vietnamese symbols are very meaningful to all Vietnamese people. 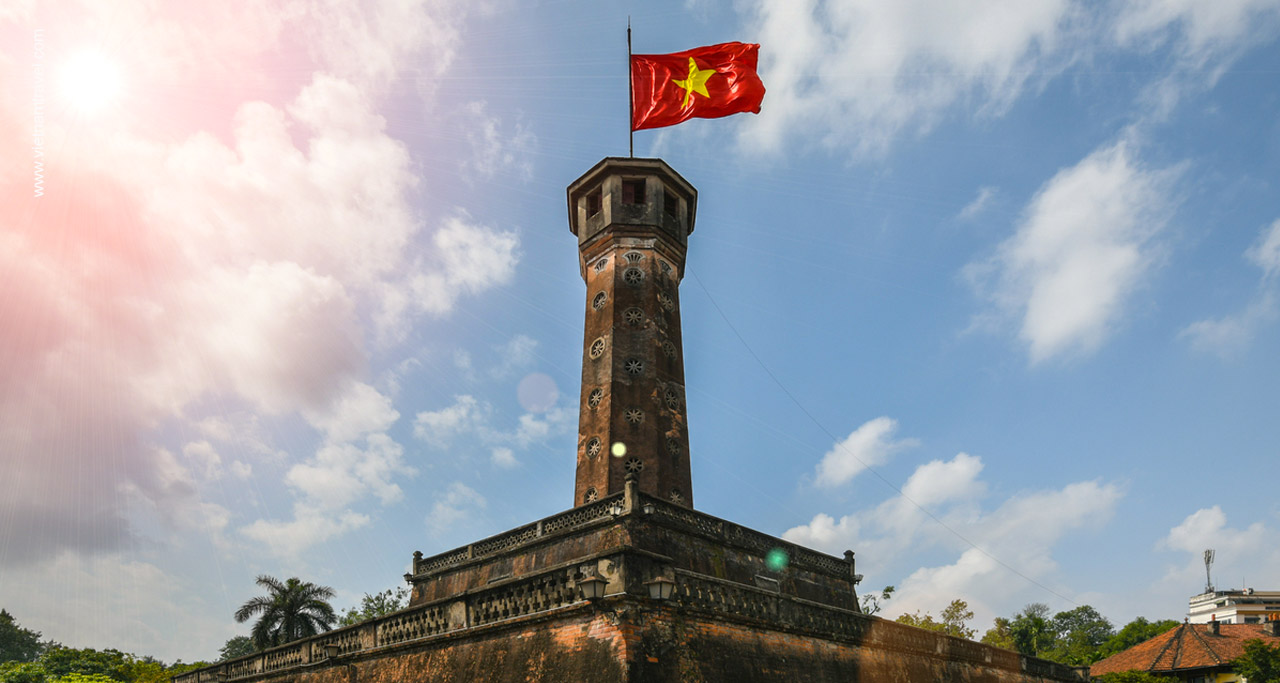 Hanoi Flag Tower was built in the early 19th century and is renowned as one of the few remaining pre-war relics of Hanoi. The tower was built from 1805 to 1812 during the reign of Emperor Gia Long as an observatory. In the past, most of the constructions in the inlying area of Hanoi were destroyed through the wars. However, Hanoi Flag Tower was one of rare architecture works which still remains today.

Moreover, the image of Flag Tower has been embedded in many remarkable historic events. After The August Revolution’s success in 1945, Vietnam’s flag flew on the top of the Hanoi Flag Tower for the first time, and on October 10th, 1954 – the capital liberation day. In 1989, this structure was recognized as a historical site and the image of the 200-year-old flagpole was printed on the first banknotes of the Democratic Republic of Vietnam.

The Vietnam flag with yellow star can be seen at the top of 33m tower. It has been hung on there since 1986 and each flag is used within two to three weeks on average. With original construction purpose as a watch tower; Hanoi Flag Tower offers a breathtaking view for the watchers standing on it. The top of the tower is an octagonal room with eight windows overlooking to eight directions, offering enough space for six people.

Located on Dien Bien Phu Street, Hanoi Flag Tower is a historic landmark that tourists who arrive in Hanoi should visit once. It is the most intact and the largest historical site in the complex of the Thang Long Imperial Citadel, located on the campus of the Military History Museum. After visiting the flagpole, tourists can pay a visit to the museum (closed on Mondays and Fridays).

3.2. The ceremony of Raising and Lowering the Vietnam National Flag at Ba Dinh Square (in front of Ho Chi Minh Mausoleum). 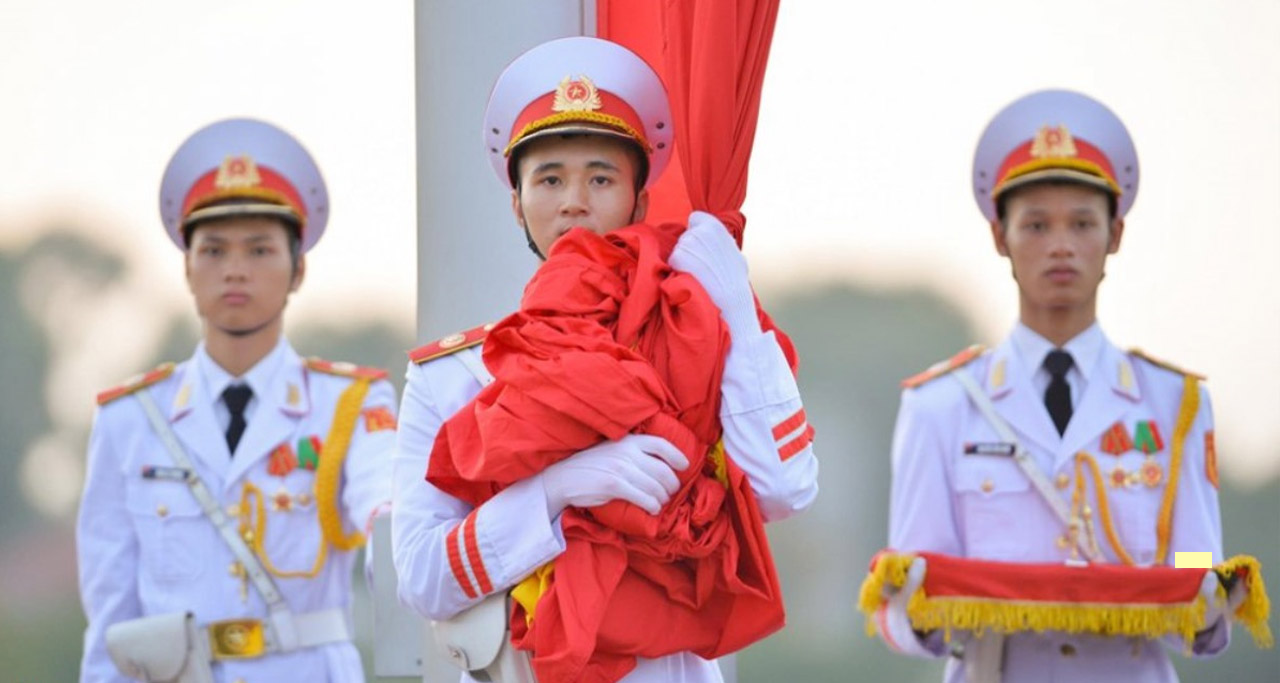 While traveling in Hanoi, you can experience impressive moments of flag raising and lowering ceremony at 6 A.M and 9 P.M everyday (whether it is sunny or rainy) at Ba Dinh Square with excited orchestra and national anthem performed by military solders in white uniforms. The delegation carrying out the Vietnamese flag consists of 34 soldiers, typically new soldiers of the Vietnam Armed Unit for National Liberation, the forerunner of the Vietnam People & Army. Interestingly, despite its solemnity during the moment of flag salutation rituals, the square is then back again a popular gathering place for the locals: families who want a walk, elderly who want to exercise and friends who want to hang out.

Hue Flag Tower is located opposite the main entrance to Hue’s Imperial City, overlooking the river. It was officially built under the reign of Gia Long Emperor in 1807 then renovated and remodeled continuously in 1829, 1831 and 1840. Hue Flag Tower includes two main parts: tower and flagpole. The tower was constructed by brick and has the shape of the three tiered pyramid. Each cube platform was placed on the top of the next one in descending order from bottom to top. Through the ups and downs of history and natural disasters, the flagpole had been destroyed and rebuilt several times. The steel-core flagpole we can see today was constructed by the Contemporary Council of Central Vietnam in 1948. Hue Flag Tower, together with Ngo Mon Gate, witnessed the significant event to mark the end of the absolute monarchy on 30th August 1945. On this day, thousands of locals observed the abdication ceremony of Bao Dai Emperor. The transfer of king’s sword and seal represented the independence of Vietnam government under the leadership of Ho Chi Minh President. On this occasion, Vietnamese flag freely flied over the Hue Flag Tower to mark this important historical event. In spring of 1968, Vietnam red flag with yellow star was hung on the tower in 26 days and nights in the pride of Hue’s soldiers and citizens. 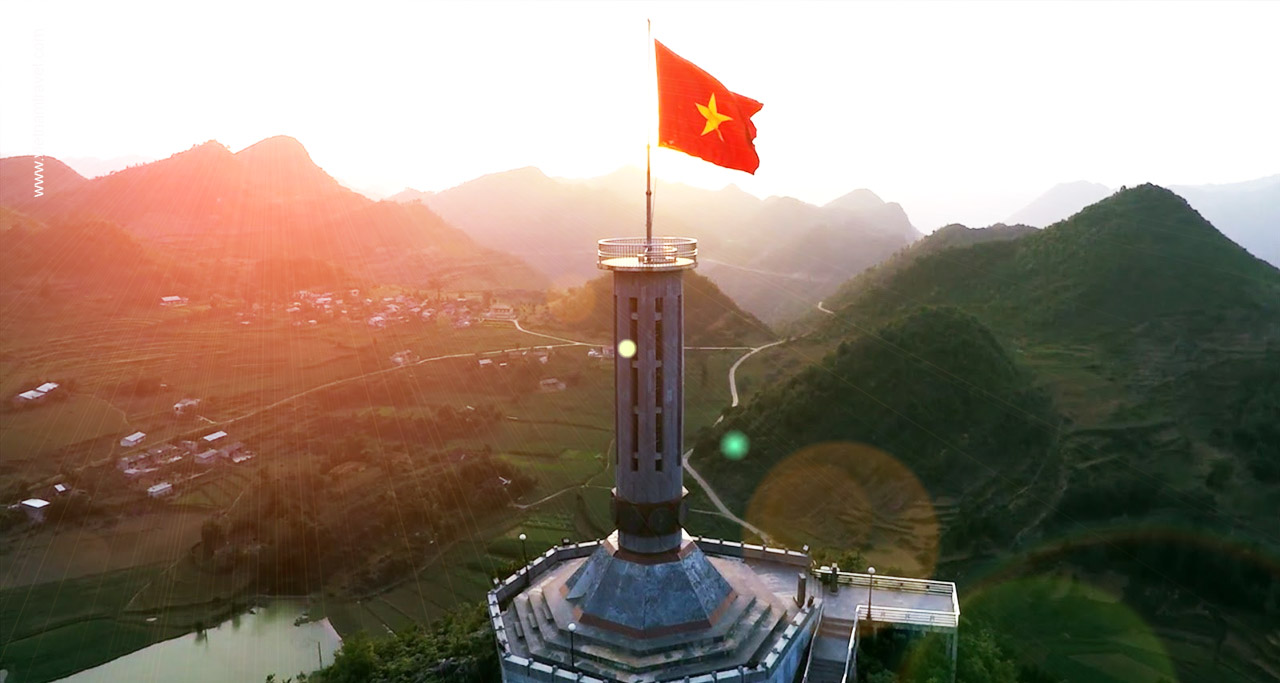 Located at Vietnam’s northernmost tip, Lung Cu Flagpole is a sacred symbol of country’s sovereignty. It’s located in the peak of Dragon Mountain (at altitude of nearly 1,500m above sea level), Lung Cu Commune, just 24km North of Dong Van, Ha Giang Province. The proud flagpole can be seen from miles away. From a distance, Lung Cu Flagpole is an amazing sight with the view dominated by giant boulders and the national flag flying above Dragon Mountain, all set to the backdrop of magnificent forests.

It is said that the first flagpole has existed here for almost a thousand years, since national hero Ly Thuong Kiet first made one out of conifer wood. Generation upon generation of Vietnamese have taken care of the flagpole and built it to the nowadays size. Its height is 1468.73 m and has similar design to the Hanoi Flag Tower, with eight bronze drums guarding the eight sides of the octagonal tower. The national flag of Vietnam flies flutteringly at the top of the 135-stair tower has the size of 54m², representing 54 ethnic groups living in Vietnam’s territory.

Standing on top of Dragon Mount, visitors can admire the hogback land-form made from riding cones, which in turns consist of steadily titled in one direction limestone layers. To the northeast and southwest, there are two lakes right at the food of the mountain, considered as “dragon eyes” by locals.

Ha Giang itself is beautiful at any time of year, with endless scenery to inspire visitors. Among many gorgeous attractions in Ha Giang such as Quan Ba Twin Mountain, Dong Van Hill tribe market, Meo Vac, Ma Pi Leng Pass etc., Lung Cu Flagpole is one milestone that should not to be missed. 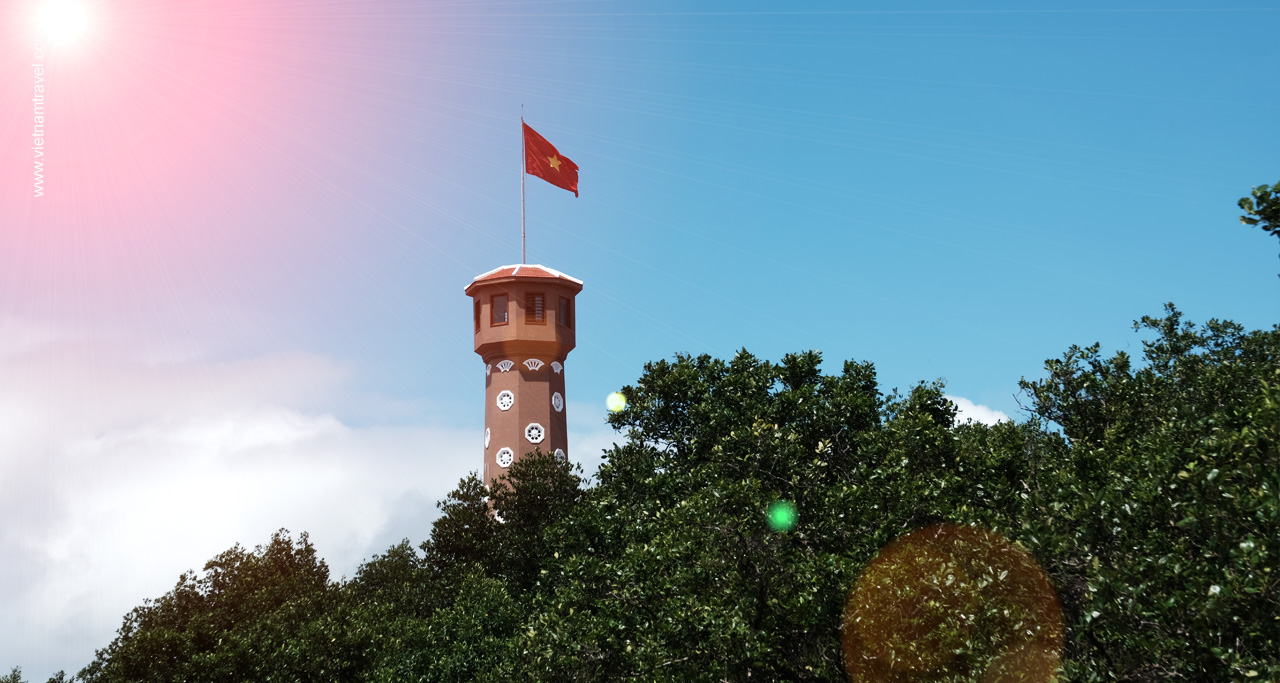 It was built in 2016 and completed in 2019 at Vietnam’s southern tip. The first level is 4 meters high, while the second and third level are 4.4 and 6 meters high. The height of the tower is 24.5 meters. The Vietnam flag tower was located in the tourist area of Cabo Ca Mau, near other important local monuments.
The architecture of the tower resembles that of Hanoi with a solid and modern structure, which could withstand adverse weather conditions.
Ca Mau welcomed one million tourists in 2019, among those 30,000 were foreigners. The province is striving to receive at least two million visitors per year from 2020 on. The replica of Hanoi Flag Tower in Ca Mau cape is expected to be a spotlight of the region, thereby, attract more visitors to a nice destination in the southern of Vietnam.