Vietnam Travel list out the Top 10 Waterfalls in Vietnam (from the North to the South) that can be taken into consideration for those seeking for adventures.

Beyond the beautiful beaches and the desert sand dunes, deep in the jungle blanketed mountains of Vietnam lie some of their most thrilling natural attractions in the S-shaped country: waterfalls. From the waterfalls of Ban Gioc in the Northeast to those of Pongour in the Central Highlands, Vietnam is home to a stunning and incredible selection of falls. 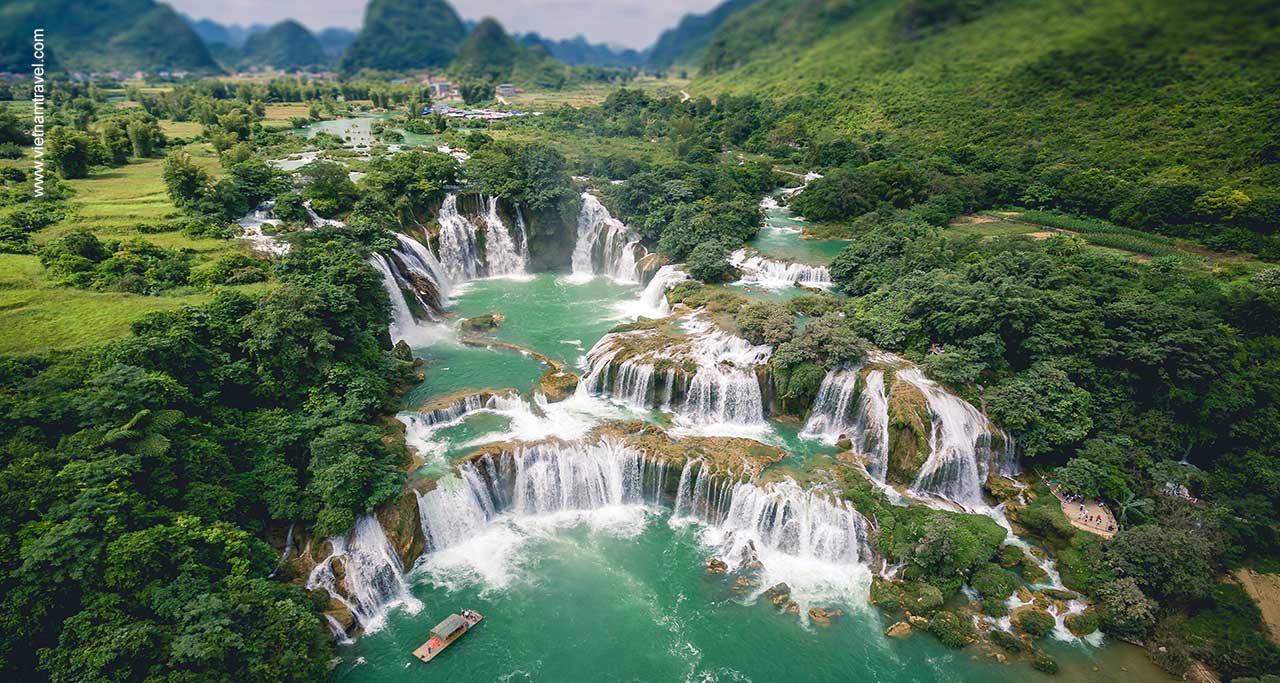 Ban Gioc Waterfall – one of the most majestic waterfalls in Vietnam

Located in Cao Bang Province, Ban Gioc is marked as the 4th largest and among world’s most beautiful waterfalls. It is one of the most majestic waterfalls in Vietnam with a collection of stunning cascades. These renowned falls are fed by the Quay Son River that marks the border between China and Vietnam. The waterfall can be visited at any time of year, but the best time is said to be September and October when the summer rains that feed the falls are less frequent and the rice harvest is in full swing. Swimming is banned here but there are small bamboo rafts that take tourists to the very edge of the falls. 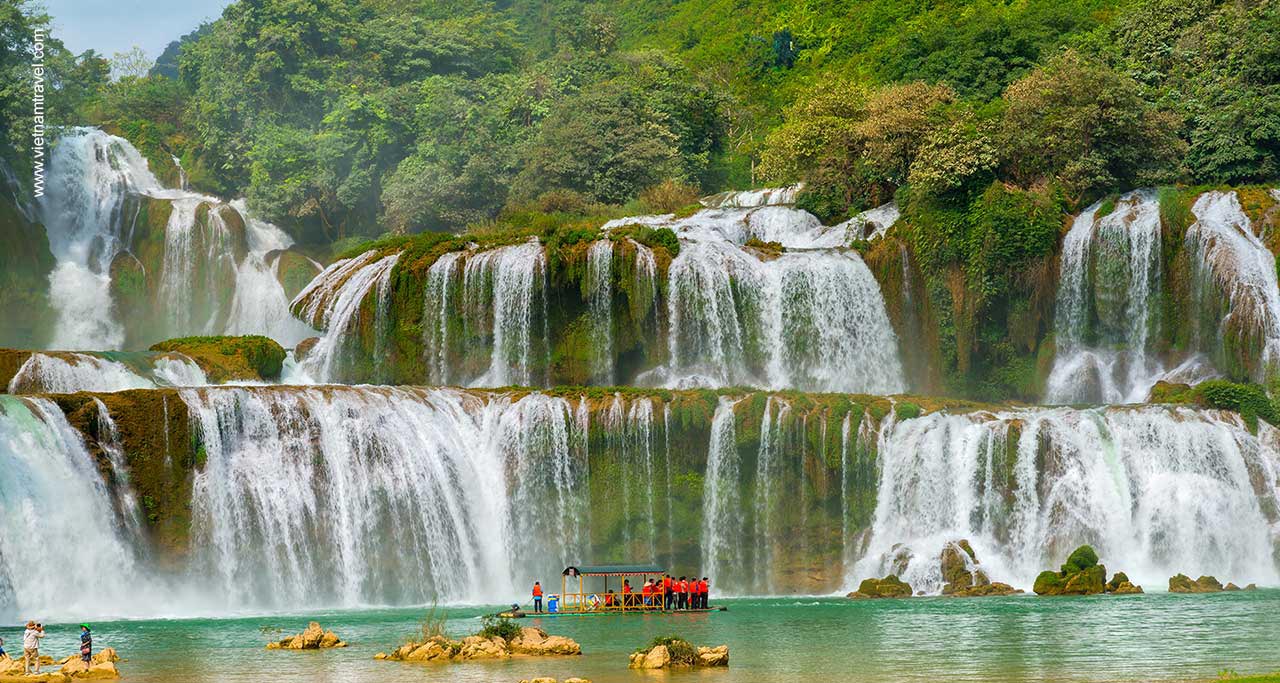 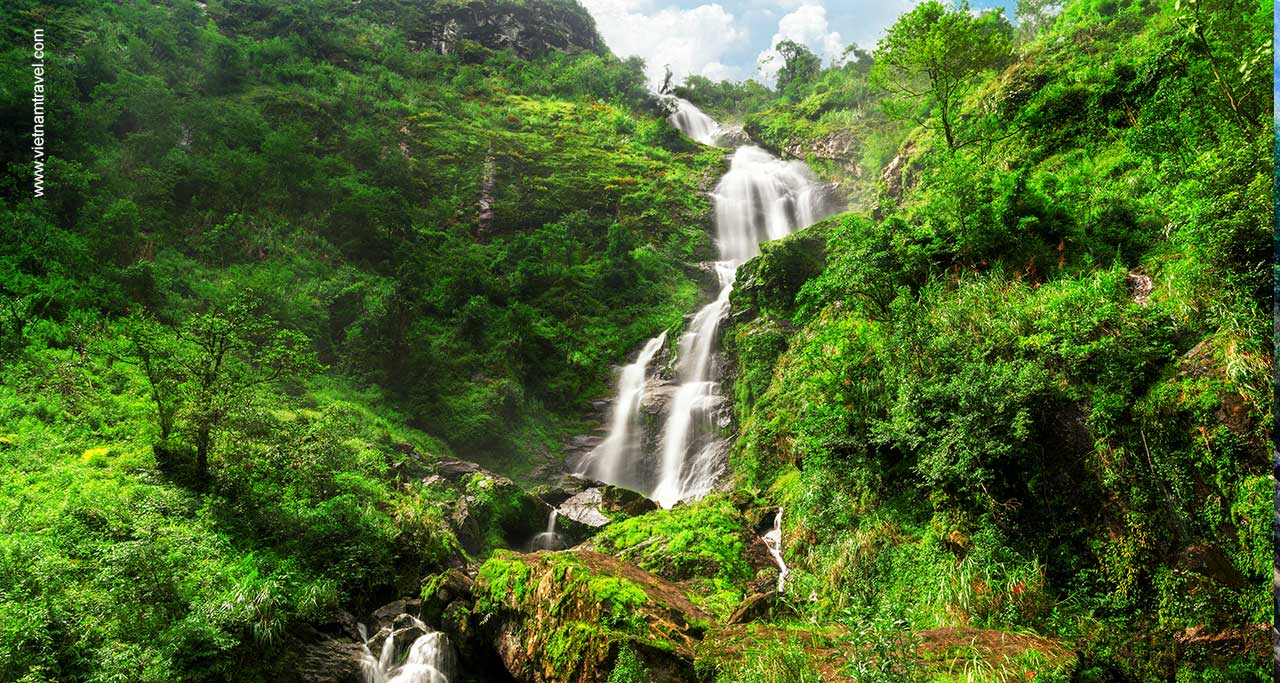 The Silver Waterfall, or as the locals call it “Thac Bac”, situated on O Quy Ho pass – approximately 12km away from the Sapa Town, is one of the most beautiful waterfalls in the region. The name of the waterfall comes from the white water stream shimmering like silver when reflecting the sunlight. Water here falls from a very impressive height of nearly 200m before touching the ground. 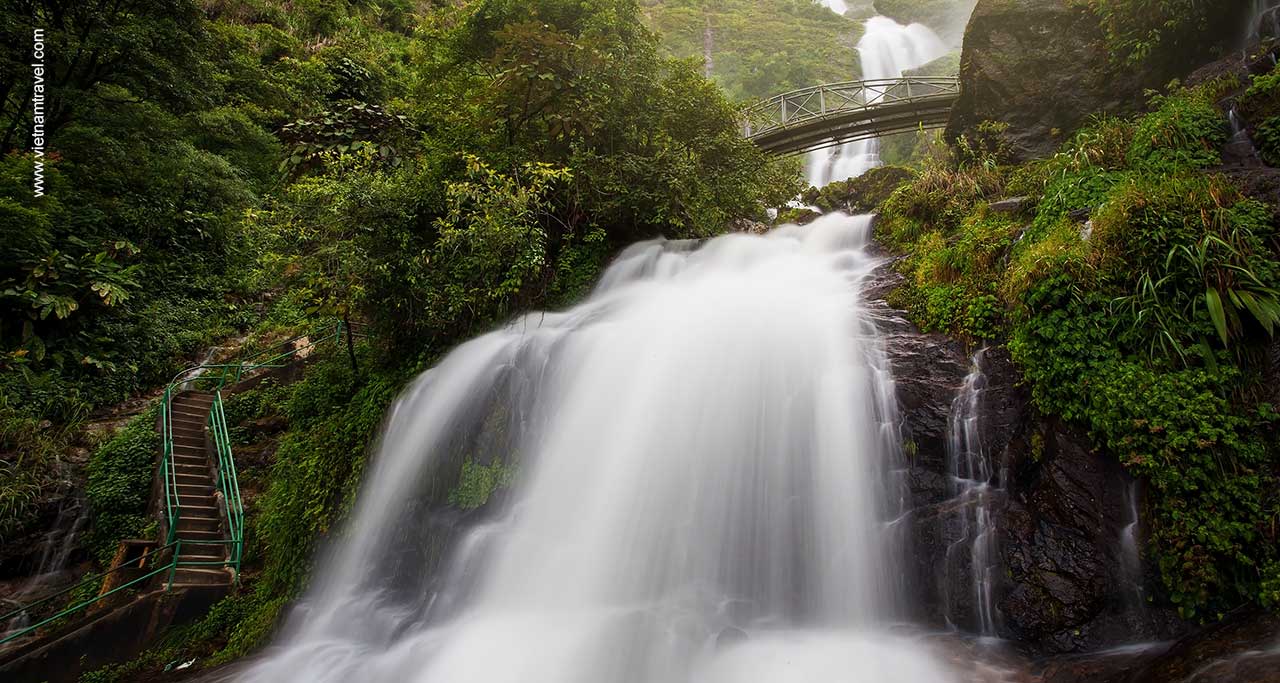 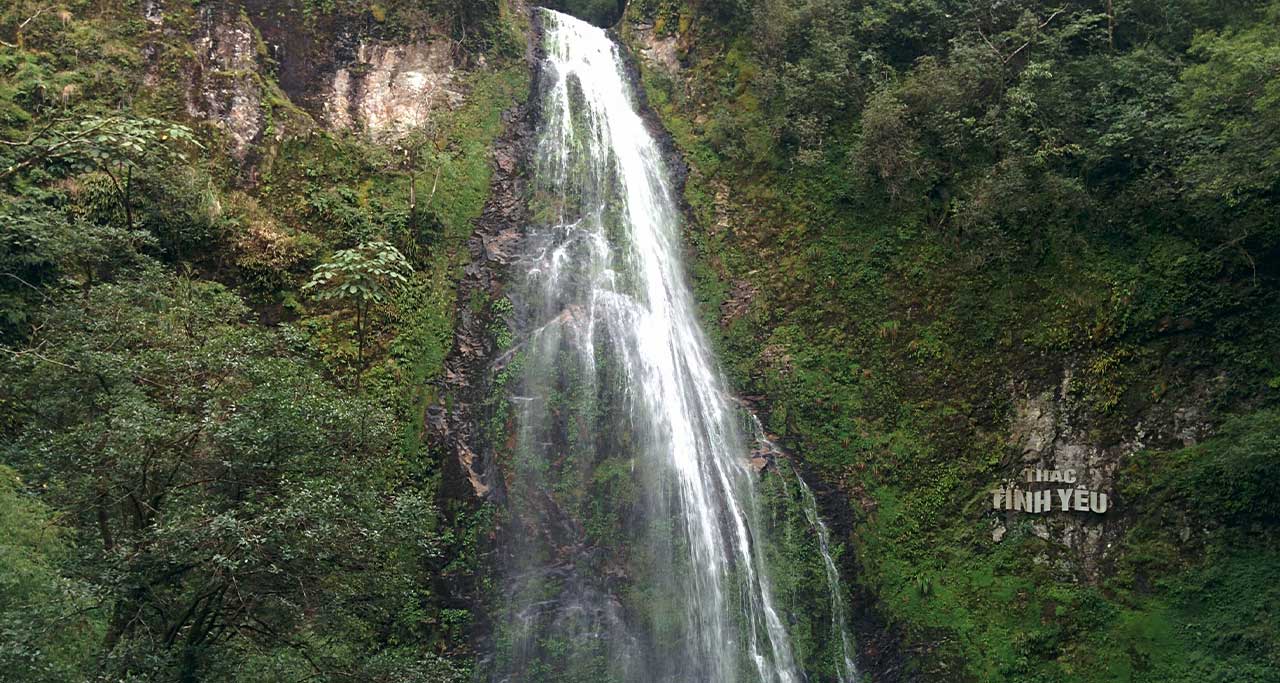 Another must-see in Sapa is Love Waterfall (Thac Tinh Yeu). The name is derived from the sad love story of O Quy Ho, the eldest son of the Mountain God and Ai Lao – the seventh fairy living in the sky. They fell in love at the first sight but couldn’t be together because of the heaven law. A 20-minute pleasant woodland walk alongside a red-soil route through the bamboo and rhododendron forests and a stream with plenty of steep slopes will bring you to the 100m-high (328 feet) falls that flow in the shade of the scenic and tranquil woods. The waterfall is actually located in the Hoang Lien National Park, below the Fansipan summit. 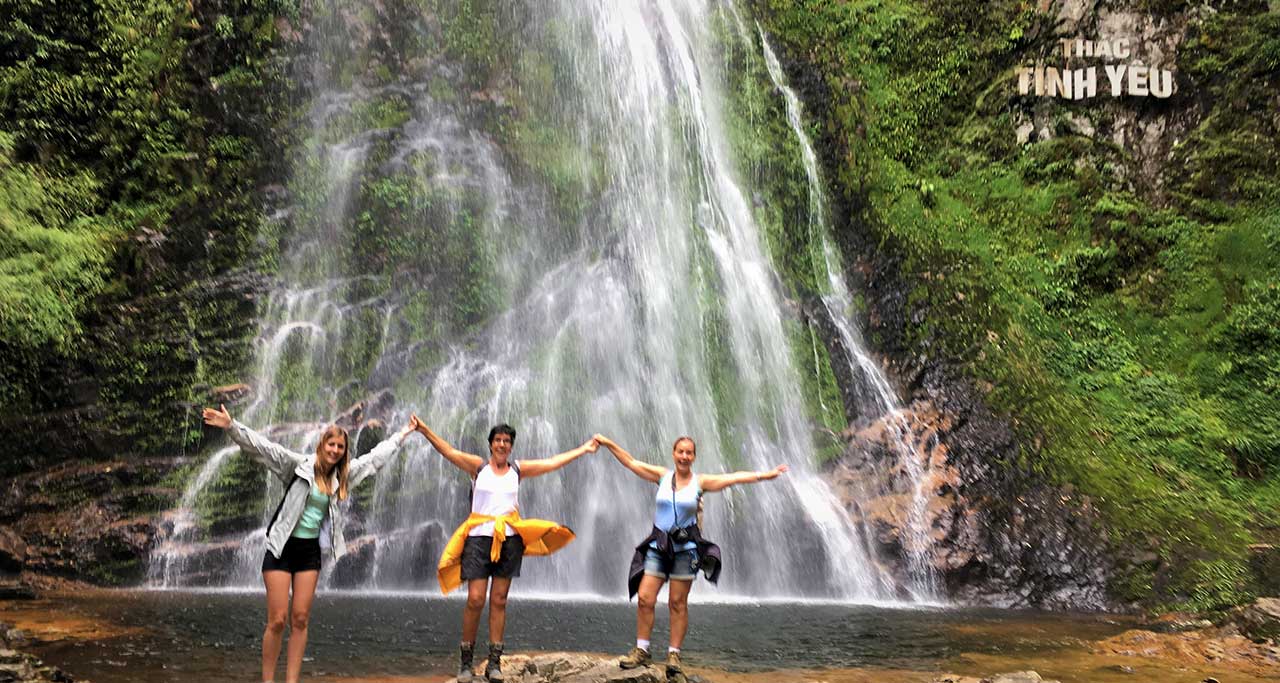 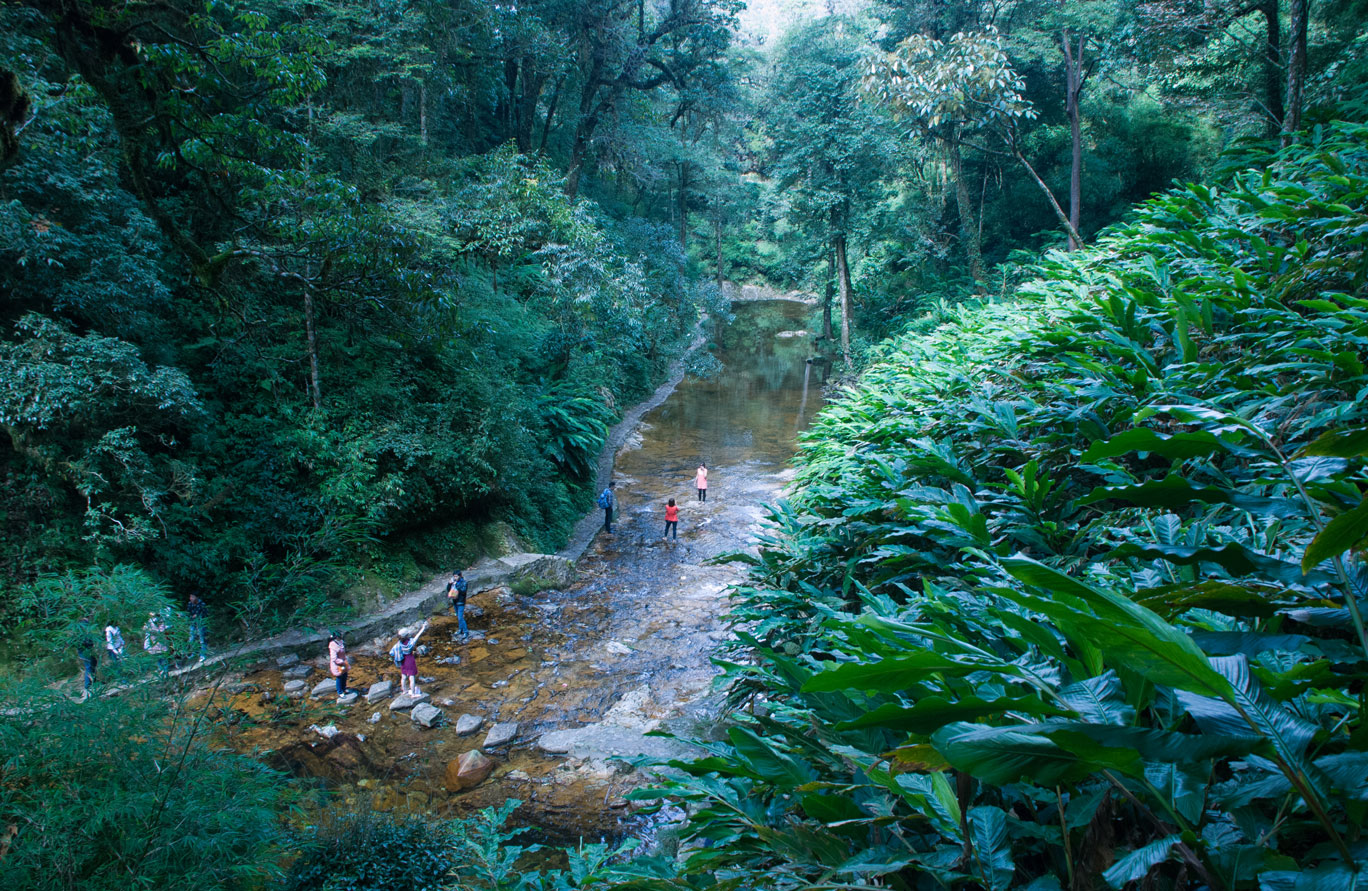 Golden Stream – on the way to Love Waterfall in Sapa. 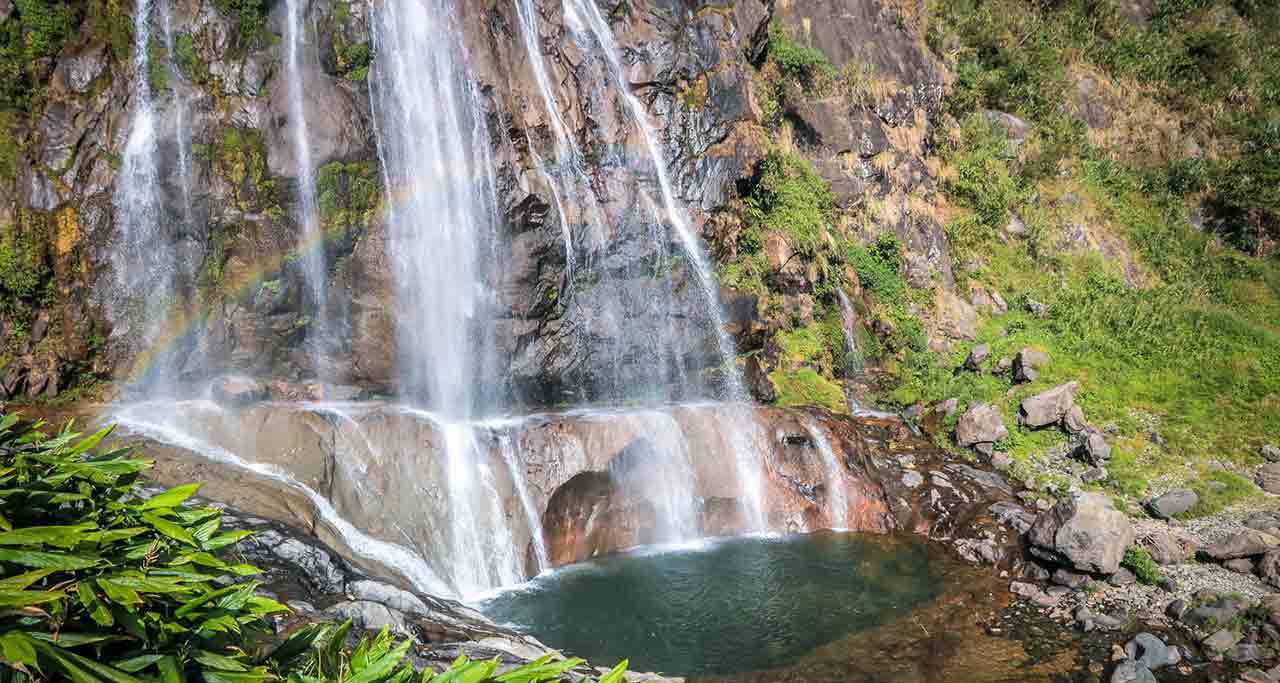 Tac Tinh Waterfall is located in Tam Duong Town, Lai Chau Province appearing as a tranquil place to relax. The waterfall sits in a small green valley where Dao ethnic resides, guarded by majestic mountains. The pristine and pure beauty of Tac Tinh has hidden a tragic love story behind. The waterfall used to witness not only the love moments but also the deaths of a young couple who their love is forbidden by many obstacles from their village prejudices. Eventually, to protect their love and loyal vows, those two committed a suicide at their regular meeting place where afterthat named Tac Tinh Waterfall. From Sapa Town, visitors could combine their day trip to Binh Lu Market, which opens on every Thursday, with this Tac Tinh Waterfall.
Address: Tam Duong Town, Lai Chau Province.
Entrance fee: 20,000 VND. 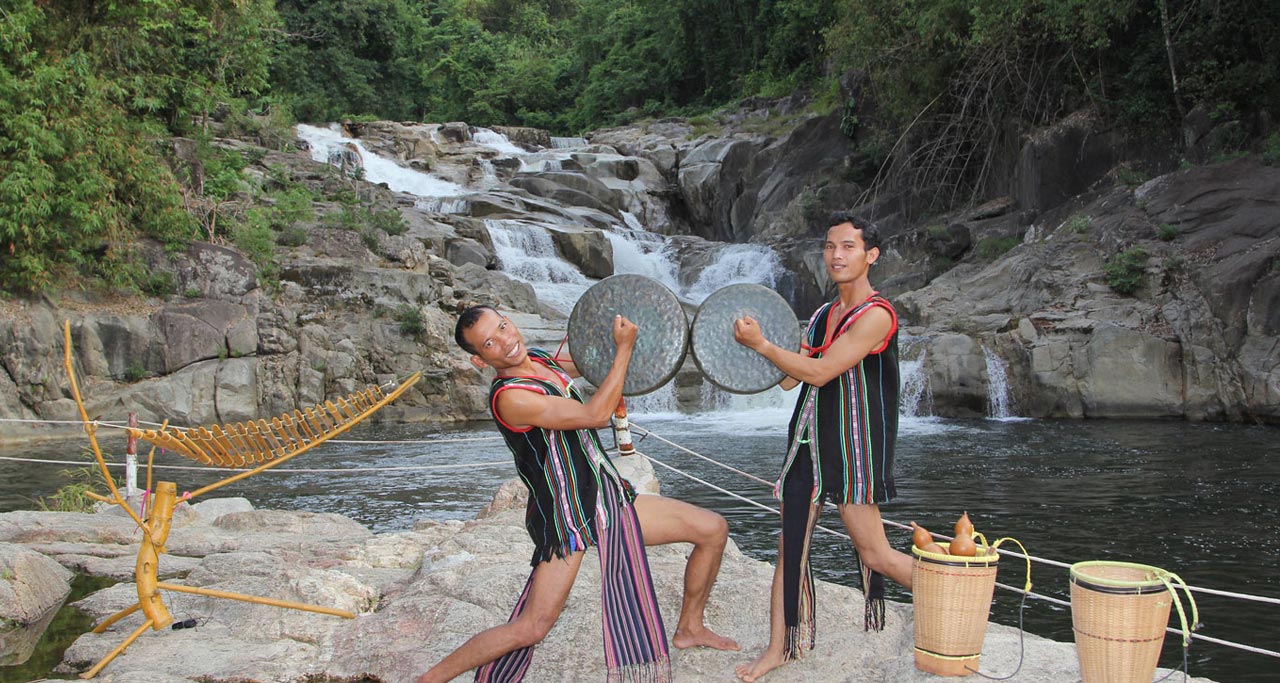 Together with relaxing white sand beaches in Nha Trang, there’s a beautiful and poetic hidden stream called Yang Bay waterfall, 45km from the city center. The road to Yang Bay waterfall is very beautiful because of its colorful flowers and their fragrant aroma. The name Yang Bay in Raglai language means “Heaven waterfall”, totally understandable with the fairy landscape here. Although being turned into an ecotourism area, Yang Bay area still keeps it pristine nature. Visiting Yang Bay waterfall, you also have chance to access a nearby small cave where used to be a shelter for revolutionary soldiers during the war. If you want to Discover Nha Trang & Yang Bay Waterfall in one-day tour, contact Vietnam Travel!
Address: Khanh Phu Commune, Khanh Vinh District, Khanh Hoa Province.
Entrance fee: from 120,000 VND. 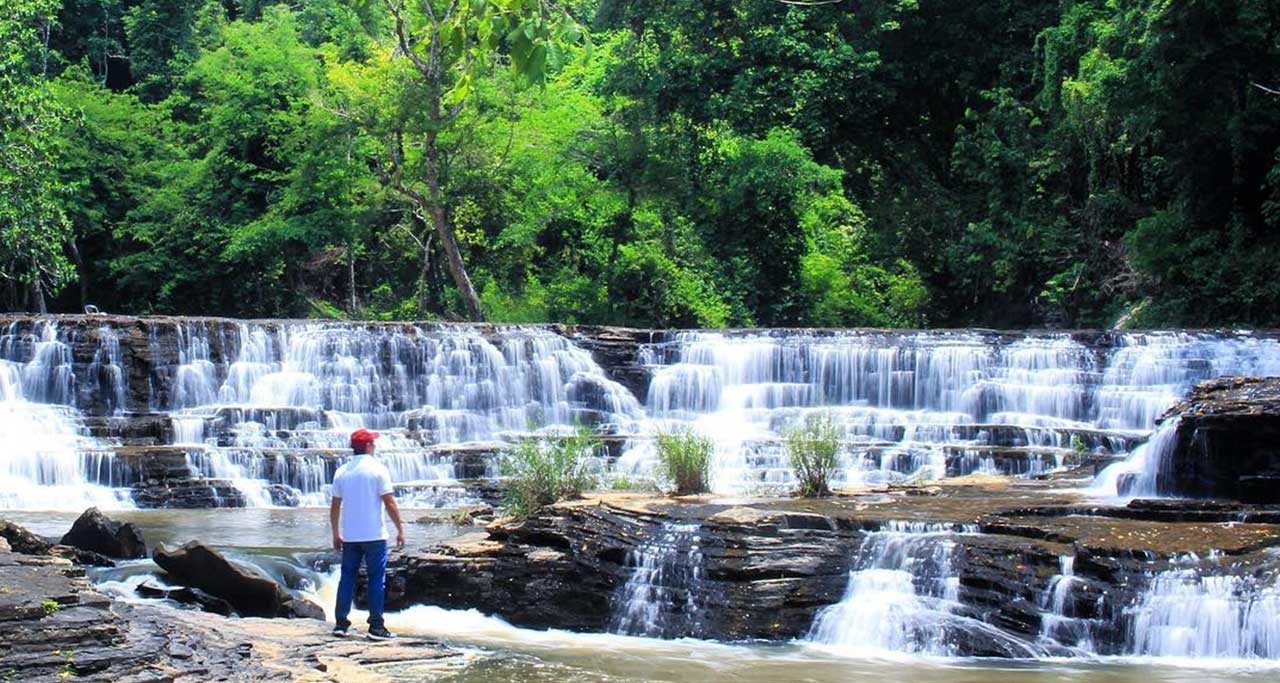 Thuy Tien Waterfall is known as three-level waterfall, which is like a fairy in the middle of deep jungle. The first layer is a low slope with steps and the tree roots along the two sides hanging down like natural hammocks. The second layer presents visitors various small and shallow lakes where becomes an ideal place for visitors to immerse in. When you see the water falling down vertically into a deep lake at the base of the waterfall, it means that you reach the third layer. The waterfall is associated with the story of a faithful girl in the Central Highlands who went to find her husband and then fell to a shoal creek. It rained down to fill the stream and also from the faithful wife’s hair, the long flowing stream created Thuy Tien Waterfall. It is totally worth the trip out of the harsh and stifling heat of the city if you are in love with impressive natural sights.
Address: Ea Puk Commune, Ea Kar District, Dak Lak Province.
Entrance fee: 25,000 VND/ adult and 10,000 VND/ child. 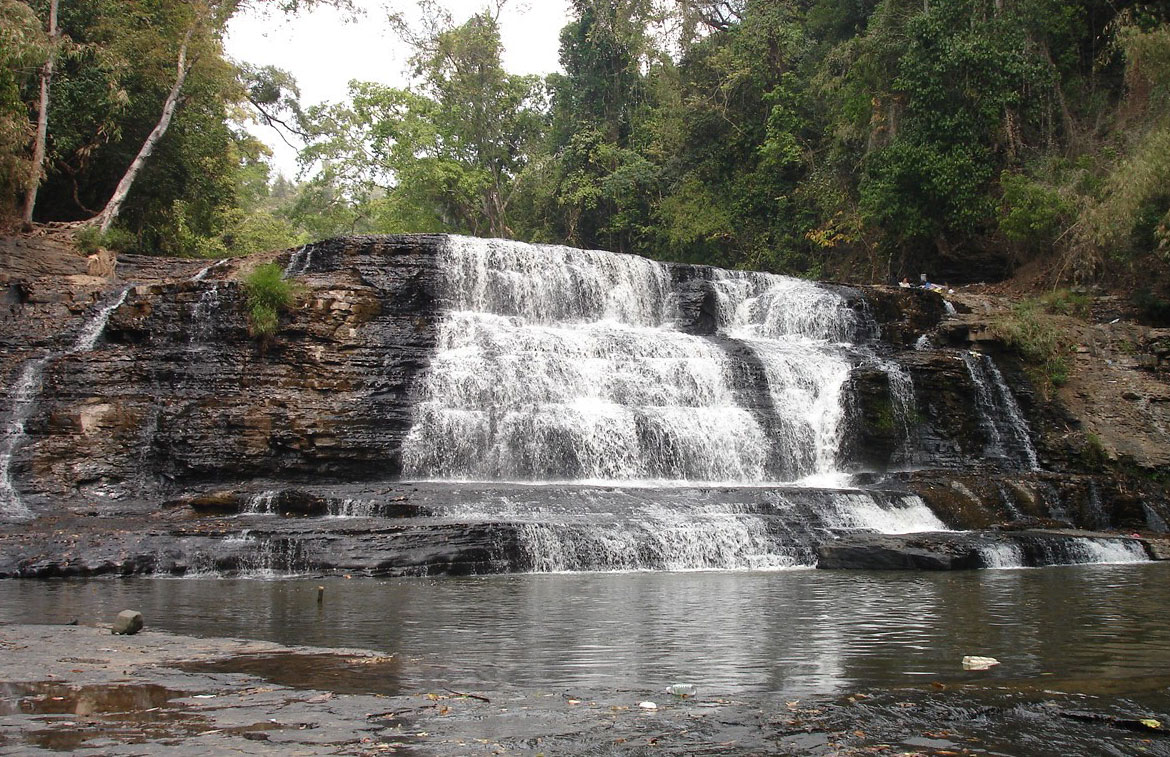 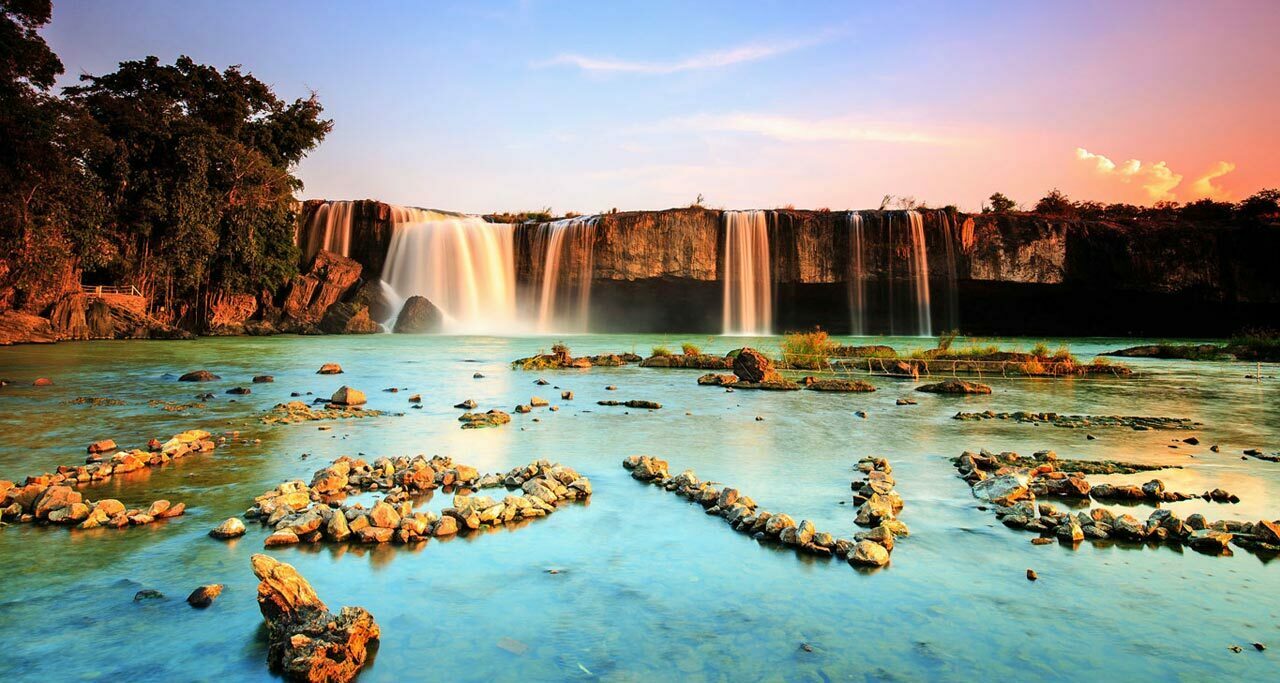 Lying at the heart of Central Highlands, Dray Nur Waterfall is the place where the natural beauty is revered and preserved. Dray Nur waterfall in Kuop Village is about 25 km south of Buon Ma Thuot City. The waterfall, which is 250m long and 30m high, is the most beautiful and largest of the three waterfalls on the Serepok River. From afar, Dray Nur offers a spectacular panorama. Dray Nur is renowned for its purity and for its incredible legends. Dray Nur in the local language, means Female or Wife Waterfall. The magnificence of Dray Nur might make some feel dizzy but for adventure lovers, visiting the waterfall is an impressive experience. 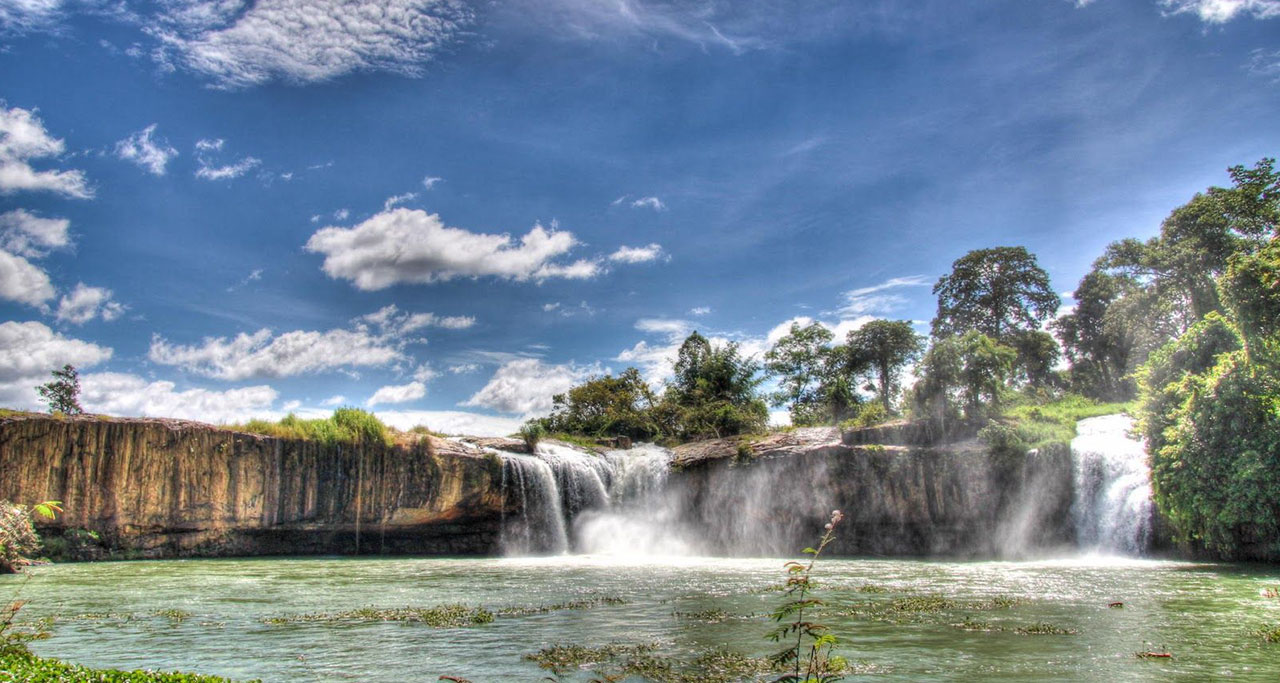 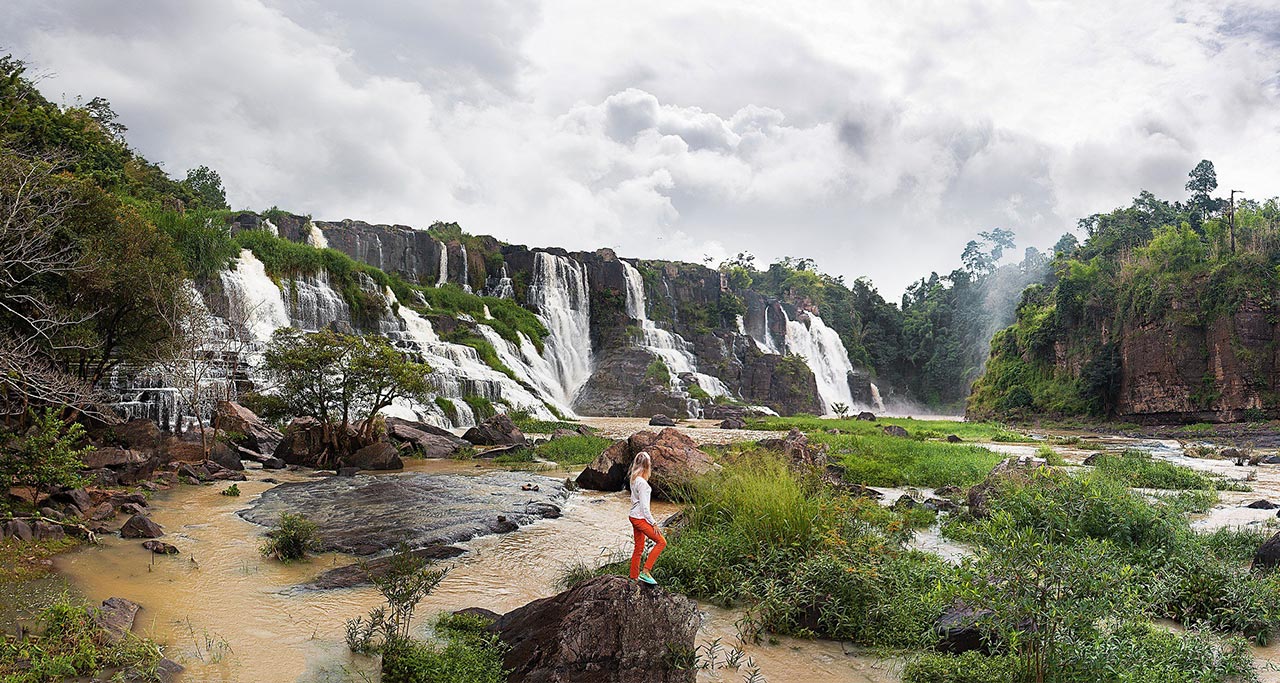 The multi-tiered Pongour Waterfall is located nearly 50km southeast of Dalat City centre or just 20km from Lien Khuong Airport. Pongour Waterfall is the largest falls in the area and one of the most impressive in the entire Lam Dong Province. It is about 40m high, 100m wide. Pongour Waterfall has exotic beauty with the huge rocky chasm, wide and terraced falls, screaming cicadas and lush foliage. Its polished steps look like a natural amphitheater! A stream of water powerfully plunges down these seven staircases, filling the air with a loud sound. The waterfall is imposing, but not formidable. Its beauty is poetic, much loved and praised by the locals as well as tourists.
Address: Tan Nghia, Ninh Gia, Duc Trong District, Lam Dong Province.
Entrance fee: 10,000 VND. 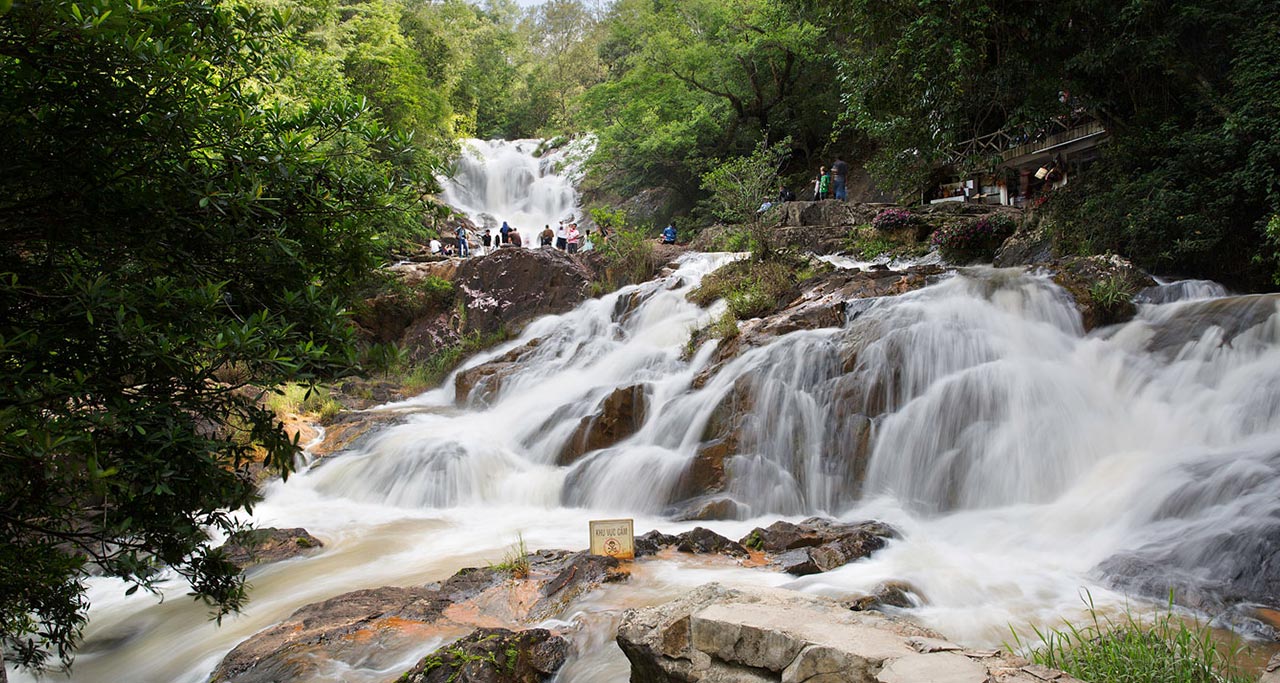 Located on a hill of Prenn covered with thousands of pine forests about 8 km from the city center of Dalat, Datanla Waterfall is a nature amusement park of sorts, offering several activities besides sightseeing. The waterfall is consisting of three floors, tourists can walk down or they can take the roller coaster to each floor. In addition, this place is also a playground with many adventure games like Canyoning, Kayak, and High Rope course. It is not the biggest or most impressive waterfall in Vietnam but Datanla is special. In fact, the name Datanla means “water under the leaves” in an ancient dialect. And even today, Datanla maintains its charm as a pretty little natural gem “hidden” in the forest.
Address: Datanla Waterfall, QL 20 Prenn Pass, Dalat City, Lam Dong province.
Entrance fee: 10,000 VND, but you have to pay separately for any activity you wish to do. 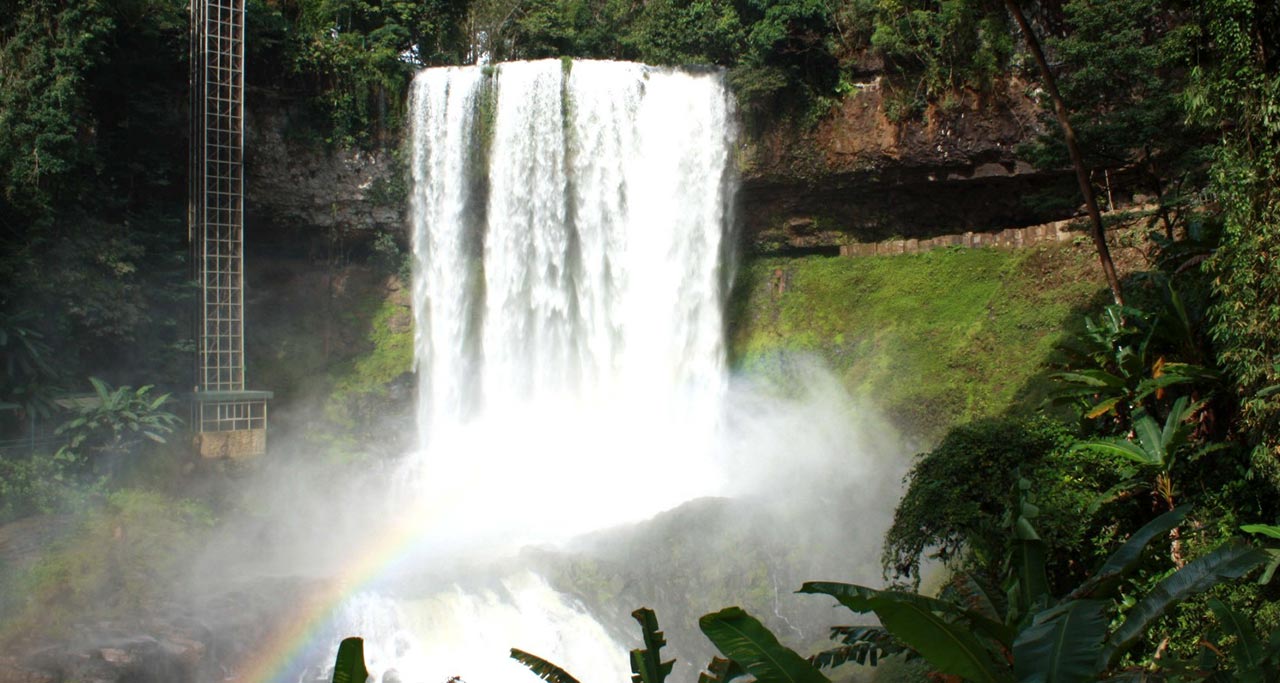 Dambri waterfall – one of the highest waterfalls in Vietnam

Dambri Waterfall – one of the highest waterfalls in Vietnam, is 130km from Dalat. It still makes this list because the falls lie within Lam Dong Province. To reach the Dambri Waterfall, visitors will have to walk a long distance and through the jungle of the Central Highlands. The waterfall is located in the campus of the Dambri Resort with a total area of 1,000 ha. This impressive waterfall is, by some accounts, the highest in the province (70m in height and 30m in width), and worth visiting even in dry season. According to local legend, the falls were created by the endless tears shed by a woman who waited for her lover’s return from the forest. He never did come back, and the woman died of sadness, her body turned to rock and her tears kept flowing; as they continue to do to this day. Thus, Dambri means “waiting”. Visitors can climb up to the small café on the top to see the panoramic view of the waterfall or continue their exploration by following the trail through the forest to reach the upstream, or go up to the waterfall peak by an elevator. 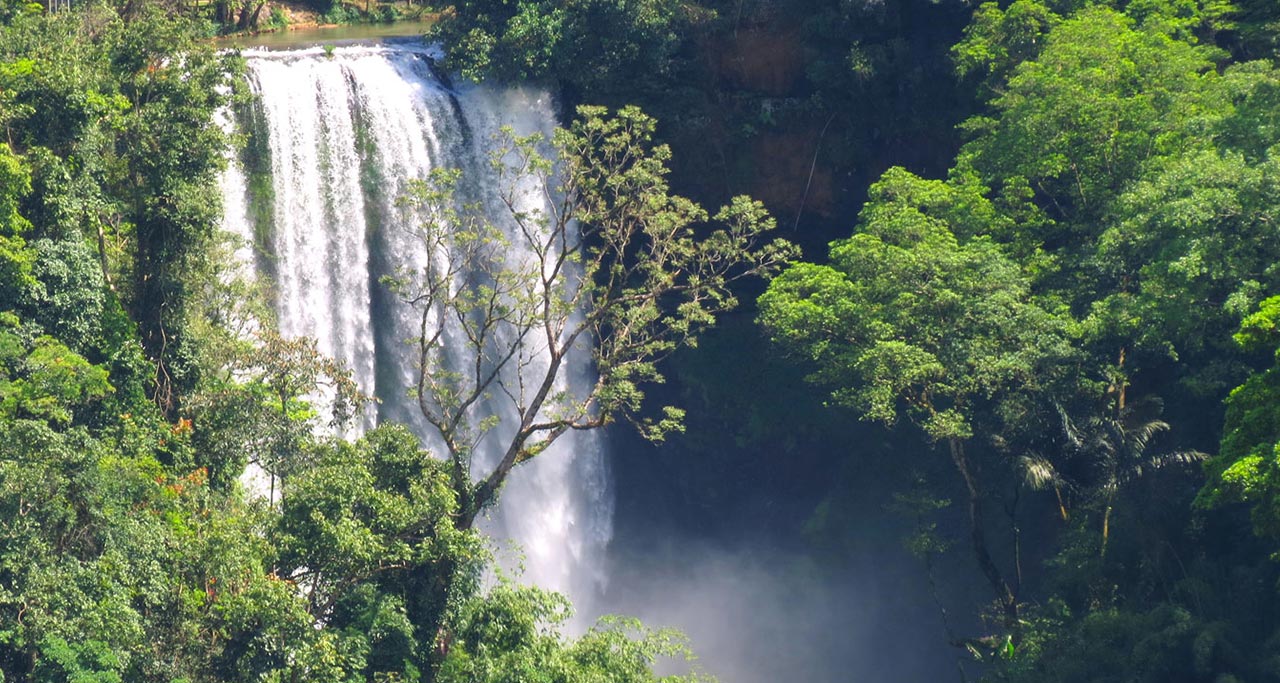 Dambri Waterfall one of two waterfalls in Vietnam in list of 15 most charming cascades in the world.

Visiting Vietnam waterfalls is one of the most unique experiences ever. The view of foamy water falling over the rocks and into a pool leaving you in a mist of freshness is something that can only be described when you witness a waterfall for the first time. These above Top 10 Waterfalls in Vietnam will delight the traveler in you! After looking at these gorgeous waterfalls of Vietnam, we hope that you are now craving for a visit to these wonderful marvels of nature. And just so you know, we feel the same. Also, do let us know if you need any further helps for your Vietnam adventure or you could customize your own tour with us online easily!