Long Bien Bridge (Vietnamese: Cầu Long Biên), is about 2km from Hoan Kiem Lake, with a history of over 100 years, is not only a traffic construction but also a meaningful historical and symbolic witness to the resilience of Hanoi during the two greatest resistance wars against the French colonialists and American imperialism as well as the dramatic changes of this city in the new era. 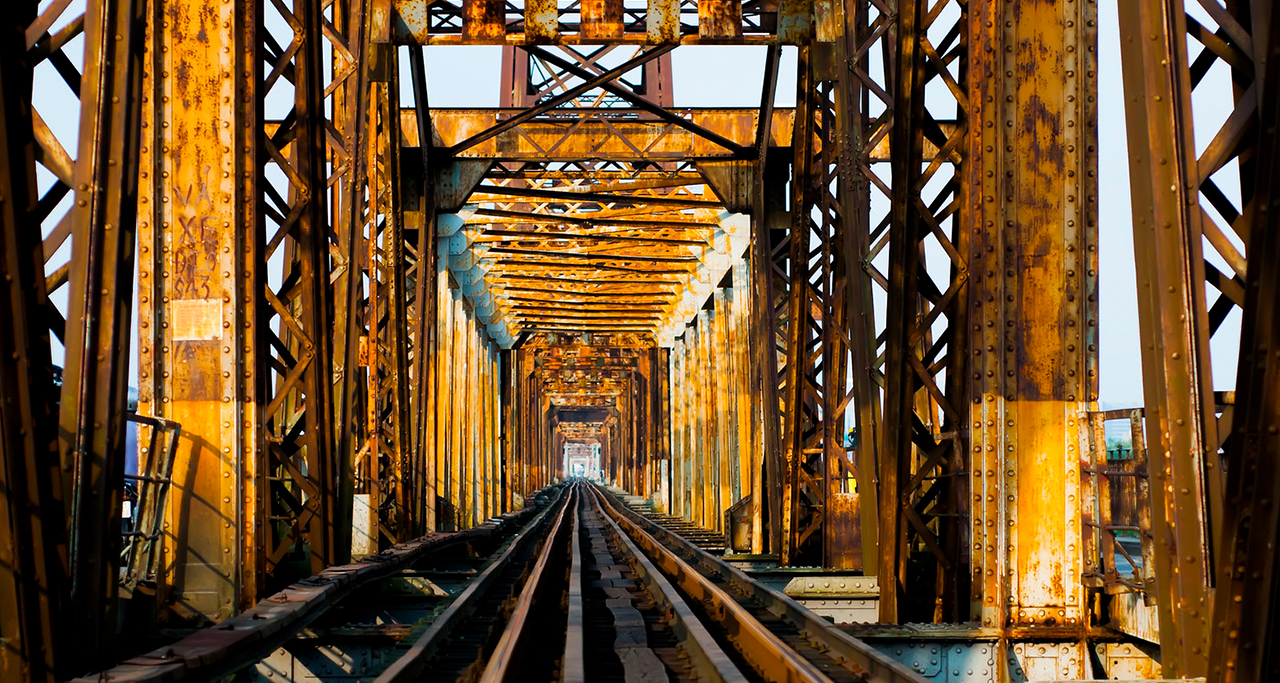 In 1897, the Governor General of French Indochina Paul Doumer approved the Long Bien Bridge project, with the purpose of improving the infrastructure and playing an important role in the colonial exploitation policy. The appearance of the bridge also helped to facilitate goods from Northern Delta and Hai Phong seaport to Hanoi Capital.

The bridge was officially built from 1899 to 1902 under the Governor General of Indochina Doumer, in the same period as the nearby Dong Xuan Market. More than 3,000 Vietnamese workers and about 40 French engineers and experts took part in the bridge’s building process, with indigenous construction materials like woods from Phu Tho, Yen Bai, Thanh Hoa province, cement from Hai Phong, Long Tho lime from Hue. When the construction was finished, it was named after Paul Doumer – The Governor-General of French Indochina and then French president.

After Hanoi was liberated on 10 Oct 1954, the bridge was renamed as Long Bien Bridge, because the bridge is located right next to Thang Long Imperial Citadel (Hanoi nowadays). Also from distance, it resembles a dragon flying across the Red River. 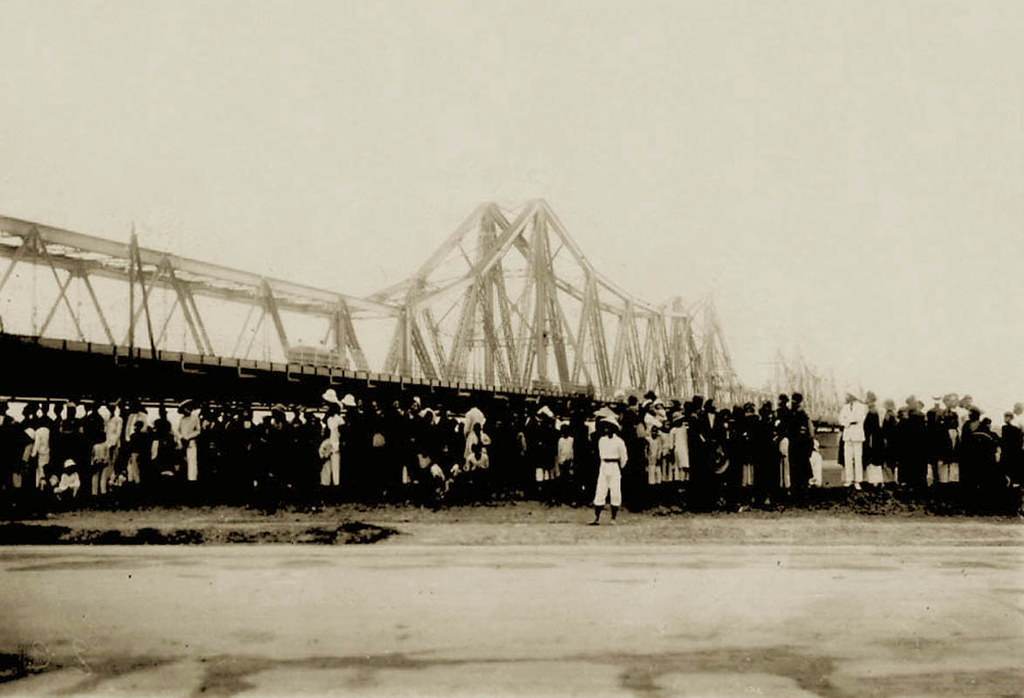 At the time of its inauguration in 1903, it was the second longest bridge in the world, only after Brooklyn Bridge in London, England. It’s even considered as “reclining Eiffel Tower of Vietnam”. The bridge is 2,290m across the river and 896m in bridges, spanning 19 steel beams spanning over 20 pillars with unique architecture. It consists of a single rail running in the middle and two lanes for bicycles and pedestrians. Opposed to Vietnam’s traffic system, the bridge’s direction of transportation means is on the left rather than the right, which it’s very common in European countries, typically France.

More than 100 years, from 1965 to 1972, Especially during the Christmas of 1972, Long Bien Bridge was heavily bombarded many times by the American aircraft due to its critical position (the only bridge at that time across the Red River connecting Hanoi to the main sea port of Haiphong). As a result, many spans of the bridge were severely damaged or torn down. Only some parts of the original structure remain intact, while large sections had been built later to repair the holes. Hence, the bridge is a living historical relic and now stands like a patched-up war veteran. It can be said that there is not any bridge that suffers so much pain as Long Bien Bridge did.

2. Things to do at Long Bien Bridge

Domestic and international tourists come here to admire and learn about Vietnamese heroic history. Crossing the bridge on foot or by bicycles and motorbikes is definitely an unforgettable experience. Especially, sunrise and sunset are two ideal times to see the beautiful natural scenery from the bridge.

When coming to Long Bien Bridge at sunrise, tourists can enjoy early morning fresh air and have chance to witness one of the biggest and busiest fruit markets of Hanoi right at the foot of the bridge (Cho Dau Moi Long Bien). 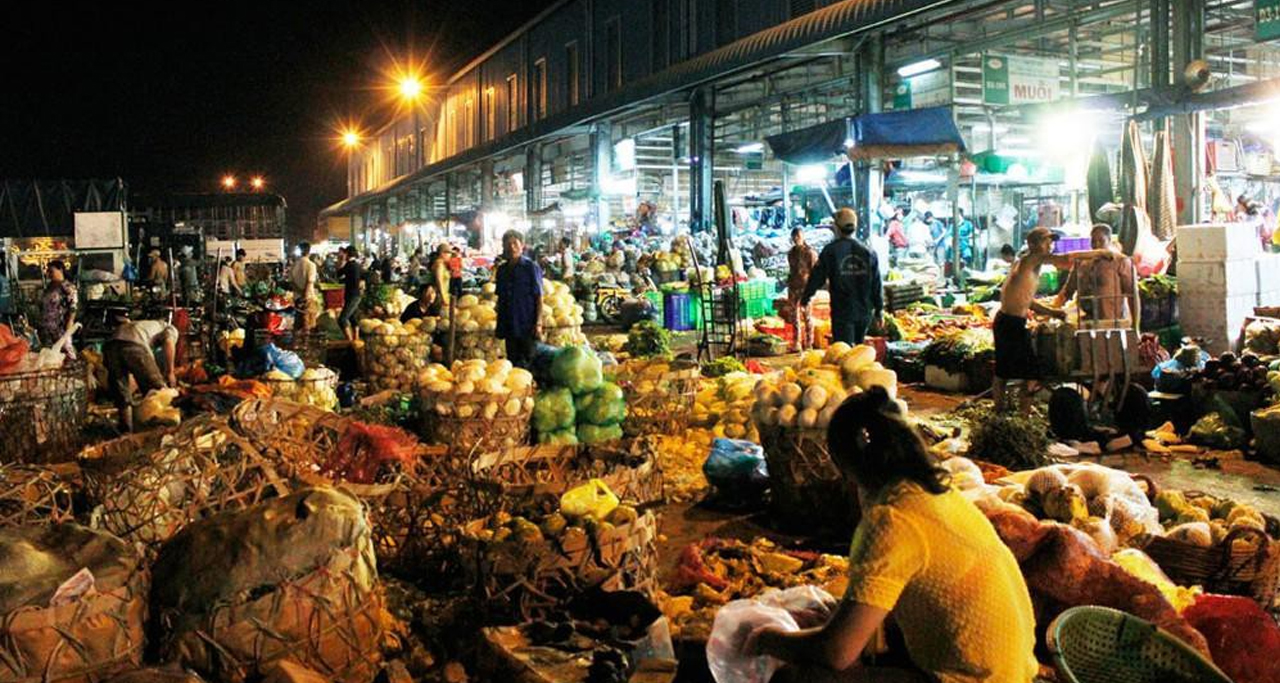 Many local residents in neighboring provinces also gather to the market to earn a living by providing transport services for traders at the market. The colorful and bustling sight of the market captures the attention of foreign visitors to the capital. At sunrise time, the golden rays of sunlight blend with the ancient brown color of Long Bien Bridge to create a romantic scene on the river that could be only imagined in a fairy tale.

Running down from the center of the bridge is a steel staircase leading to an island, which is called as the Middle Island of Red River (Vietnamese: Bãi giữa sông Hồng). This island is a huge green landscape with verdant banana fields and corn alluvial plains. Many youngsters and local families choose this as the picnic spot at weekend.

The breathtaking view of Long Bien Bridge makes it an ideal destination for photographers and for those who want to get away from the hustle and bustle of the vibrant city for a while. The bridge is a perfect background in wedding albums of many couples.

At night time, when walking or standing on Long Bien Bridge, visitors can feel the cool breeze from the Red River and admire the glory light of Hanoi center from afar as the twinkling stars from the sky. Coming to Long Bien Bridge in winter, visitors should not miss the opportunity to sit back at local street vendors, eat hot and aromatic baked corn and sweet potatoes. That way, Long Bien – the oldest bridge in Hanoi is still living and sharing the daily life with Hanoian from generations to generations.

Long Bien Bridge looks like a winding dragon from a distance. It has been an infinite inspiration to many artists, songwriters, poets, and photographers. It is praised for the sacrifice during the wartime in the past, or its classic beauty at present days. The image of the bridge appears almost in every aspect of life, from the history to the art.

The other side of Long Bien Bridge, there is a Food Street ( Cho Am Thuc Ngoc Lam) mostly for local and serves good local food. All restaurants here has river & bridge view,  Reasonable price, Good food and cold beer.

The bridge is part of Hanoi Old Quarter. It is walking distance from your hotel in the Old quarter of Hanoi. With the very convenience location allows tourists to walk or bike crossing the bridge. Just remember to go to the left of the road and take the ramp near Gam Cau Street to get on the bridge. 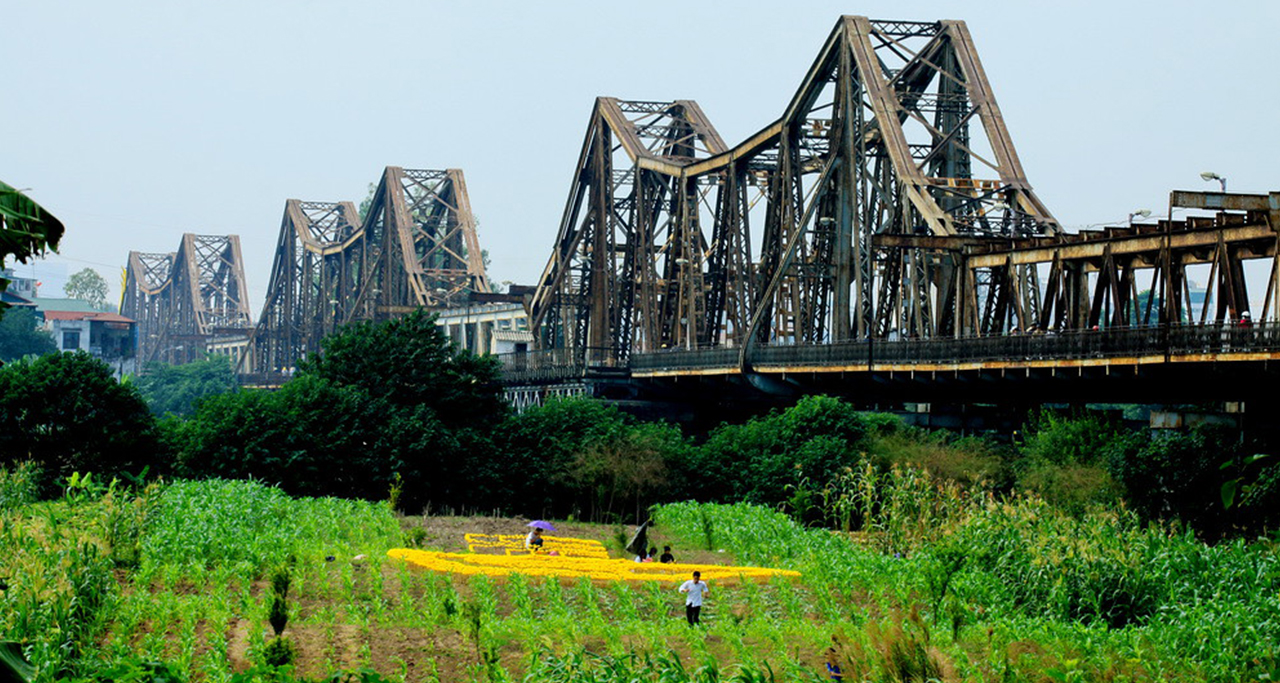 Public transportation system in Hanoi is quite convenient for those living far from Hanoi center. There are several bus routes that takes you to Long Bien Bridge, including Bus No. 01, 14, 15, 22, 34, 47, 55.

You can get off the bus at Long Bien Railway Station or Long Bien Transshipment Spot.

If you have chance to visit Hanoi, do not forget to take a walk on Long Bien Bridge for sightseeing, exploring the local daily life, and enjoying peaceful moments at the present but not forgetting memorable historical past. Vietnam Travel’s tours in Hanoi include the visit to Long Bien Bridge in the early morning to admire the sunrise and then our experienced tour guides will escort tourists to explore other interesting spots nearby.