The Vietnam National Museum of History (VNMH was built in charming French architecture is one of the most attractive museums in Asia. It contains a large collection of valuable objects depicting Vietnam’s history of construction and defense. 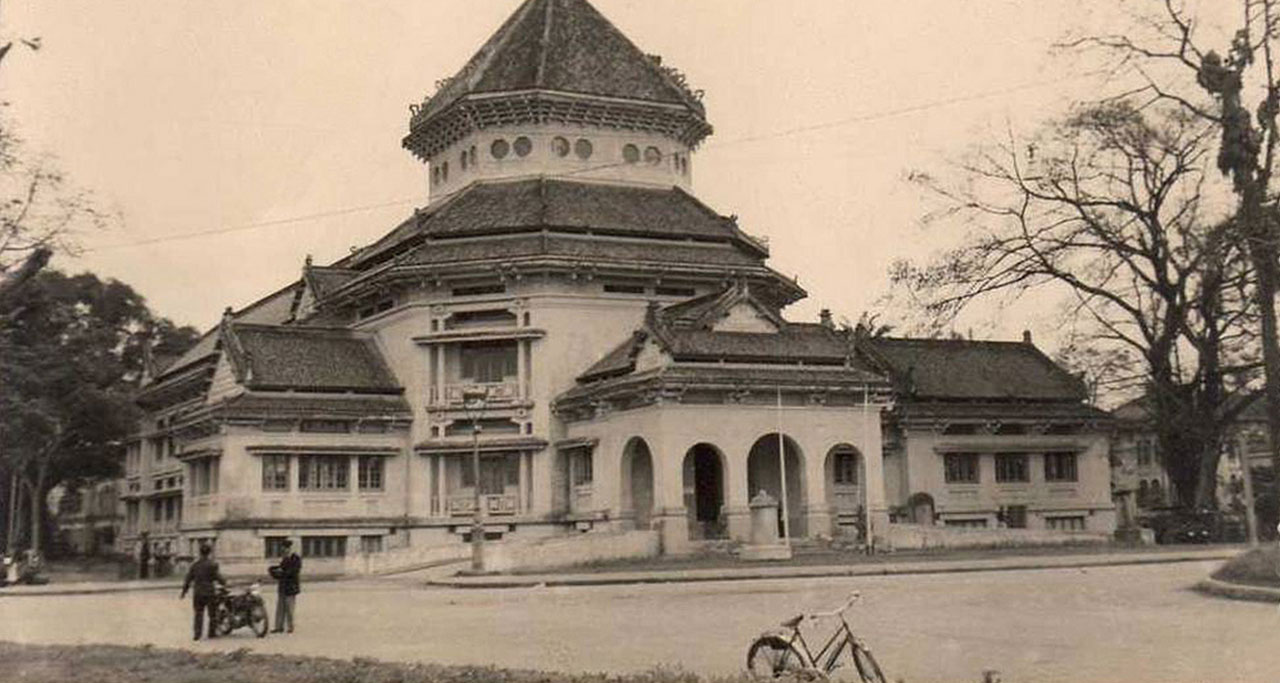 The Museum is located in the heart of Hanoi close to many sacred relics such as: Opera House, Trang Tien street; Turtle Tower – Hoan Kiem Lake; The Huc Bridge – Ngoc Son Temple – But Thap Tower.
The first building is at No 1 Trang Tien Street (Vietnamese History from Prehistoric period to Nguyen dynasty, 1945) and the second building is at 216 Tran Quang Khai Street (Vietnamese History from the mid-19th century to present).
The new construction of the VNMH has been underway for years in the western side of the West Lake. This is expected to be a modern museum with world-class standards. 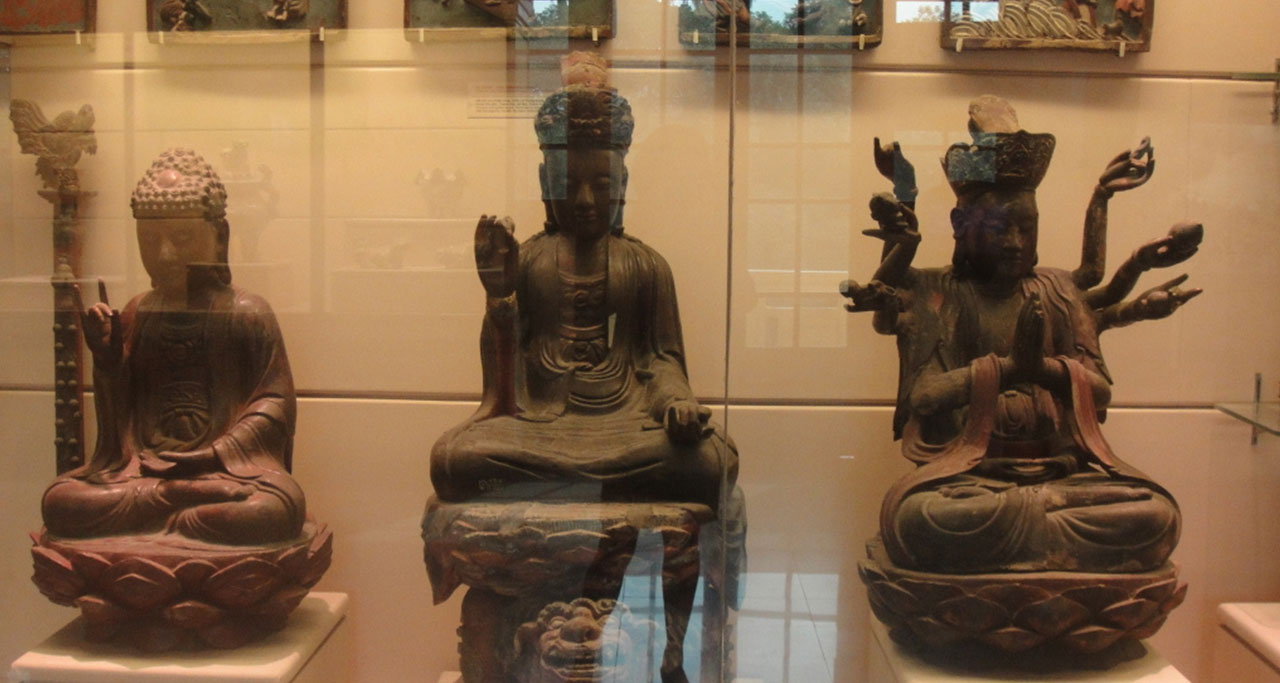 The museum is housed in Indochine style which is a cupola shaped edifice in the shape of a pagoda. The design of the building is an amalgamation of French and Chinese architecture known as Indochine architecture. The building designed by Hebrard, incorporates double walls and balconies for a natural ventilation system and protection from sunshine.
The exhibition area is more than 2,200 square metres (24,000 sq ft) with exhibits arranged chronologically. It is divided into four major sections:
+ Section 1 covers period from the prehistoric period from the Stone Age (30,000–40,000 years ) to 4,000–5,000 years ago;
+ Section 2 has displays from the time of nation building during the Tran Dynasty;
+ Section 3 has exhibits from the period of the Ho Dynasty to the August 1945 Revolution;
+ Section 4 has artifacts of the Champa stone sculptures.
The museum stores and preserves about 200,000 objects and materials of Vietnamese cultural history among which there are nearly 110,000 antiques and 19 national treasures from prehistory to 1945. There are rare and valuable collections representing the history and culture of Vietnam such as: archaeological artifacts from Early Paleolithic Age to Metal Age; a collection of Dong Son culture; a collection of Vietnamese traditional glazed ceramics; bronze items of the Lê – Nguyễn dynasties; Champa stone sculptures; a collection of foreign ceramics originating from China, Japan, India and Southeast Asia. 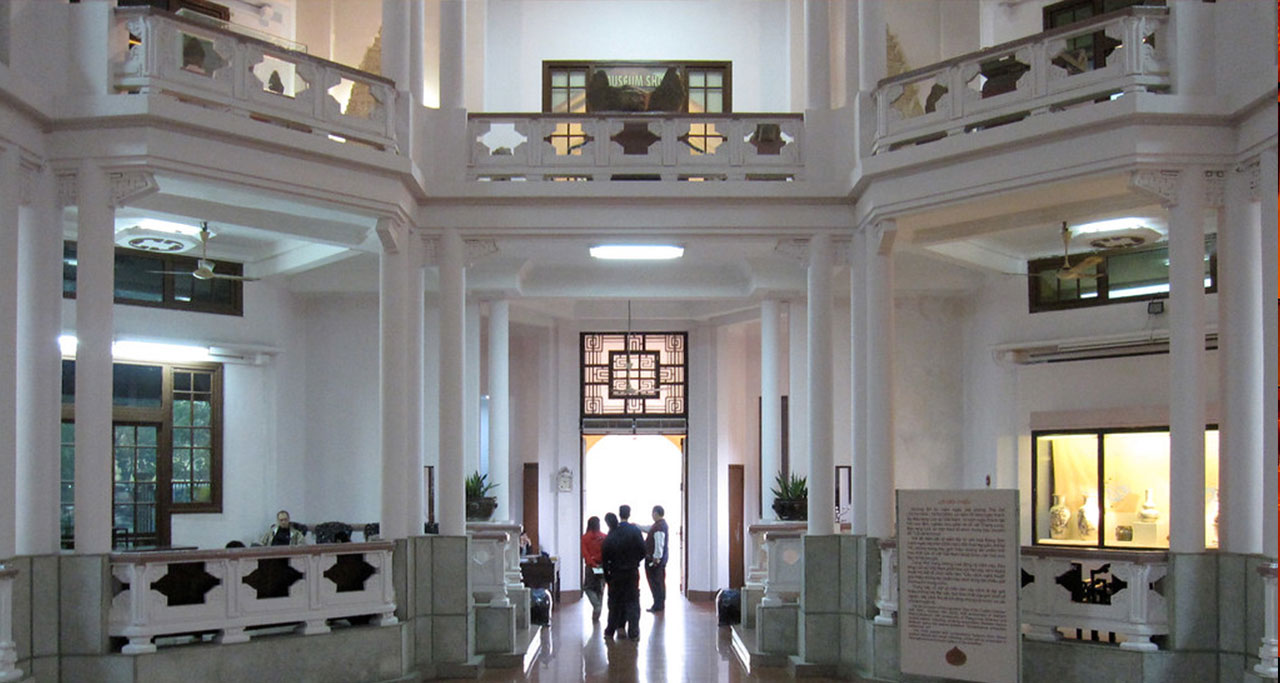 Exhibits in the museum include Hung era and Neolithic mortuaries, Bronze Age implements such as axe heads, and Cham period artifacts.
There is an intimidating sculpture of Quan Am, the Goddess of Mercy, which has 1,000 eyes and arms. Also on display are the 13 Nguyen dynasty emperor’s ornamented throne, dresses and other antiquities.
These include the large Dong Son drums, which are symbolic of Vietnamese culture.
At ground level the display consist of stone implements, pottery, and ornaments, up to 1400 AD. On the first floor the exhibits pertain to the monarchic reign from the time of the Dinh and Le eras of 900 ADs to Vietnam’s last emperors; these are decorative items such as a chest of drawers inlaid with mother-of-pearl, cylindrical containers of enamel (these are funerary jars), ceramics and bright lacquer ware.
There is a stele which was found during an archaeological excavation with an inscription at a monument labeled G1, which is dedicated to God Harivamsesvara by Harivarman I (ca. 1137) is preserved in the museum.
The exhibits of new artifacts cover Central Vietnam, Central Highlands, South Vietnam and also an old shipwreck near Cu Lao Cham Island.
The museum has signage in English, but this is inadequate to express all that is on display in the museum.

As one of the best National Museums in Vietnam, VNMH has adjusted and oriented its activities to meet the social demands and has initially achieved remarkable results -in professional fields, such as: archaeological excavation, exhibition, preservation, publication and so on. The exhibition system is always updated with new information and materials. It is also perfected for both scientific contents and displaying methods, combining the application of modern scientific means to bring the best effect and satisfy the increasing demand of the public.
Come to the VNMH, visitors will experience outstanding representations about the history and culture of Vietnam as well as the heroic tradition of the Vietnamese people that was formed during the process of constructing and defending the country.