“Nha Tho Duc Ba Sai Gon” which is known as Notre Dame Cathedral Saigon has an official name as Immaculate Conception Cathedral Basilica in English and Cathédrale Notre-Dame de Saïgon in French. This French-built cathedral occupies scenic Paris Square in the heart of Ho Chi Minh City at 1 Cong Xa Paris, Ben Nghe, District 1, Notre Dame Cathedral. It is one of the oldest religious architectural works in Saigon. Combining to other constructions such as Central Post Office, Reunification Palace, Opera House, etc. Notre Dame Cathedral contributes to create a unique architectural complex, which is the symbol of urban architecture of the most dynamic city, Saigon – Ho Chi Minh city. 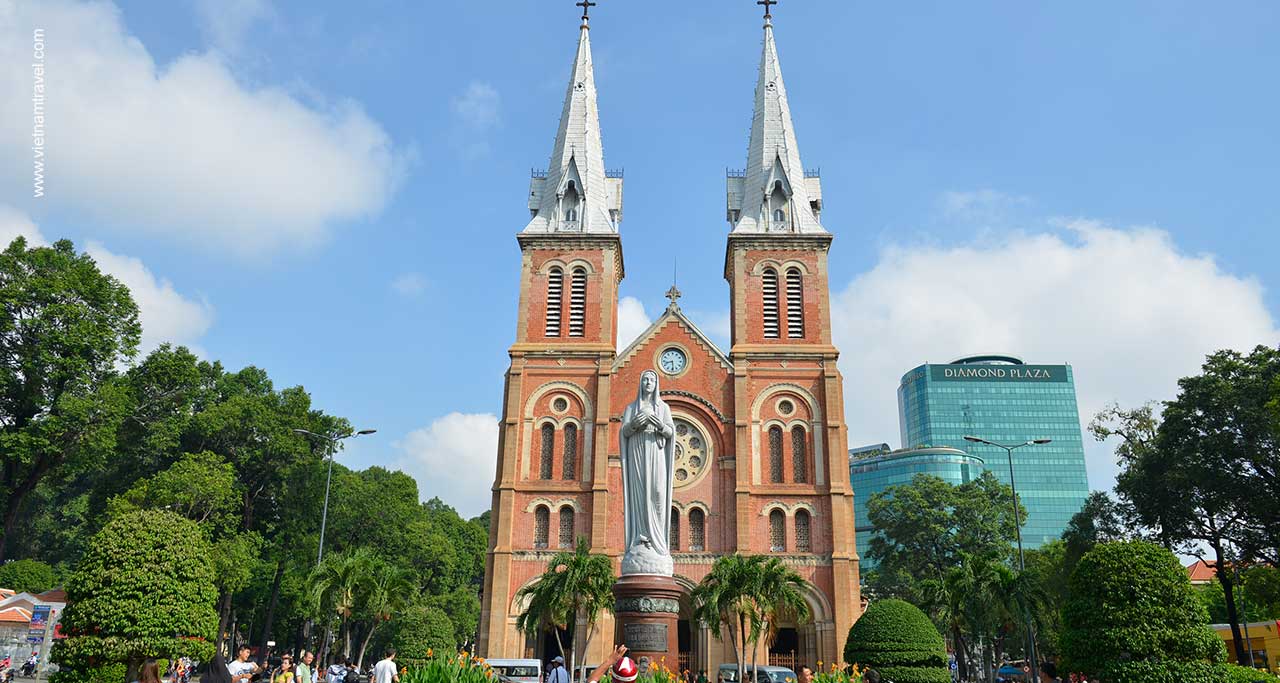 Immediately after occupying Saigon, the French established a church to serve as a place of worship for Catholics in the army. The first church was located on today’s Ngo Duc Ke street, which is an old Vietnamese temple abandoned due to the chaos of the war.
This first church quickly became small with an increasing number of believers. In 1863, Governor Louis Adolphe Bonard decided to build a wooden church on the banks of the Charner Canal (Kinh Lon). This canal was later filled and built into Nguyen Hue Street today. Father Dominique Lefèbvre put the first stone for the construction of this church, then named it as Saigon Cathedral. However, due to the wooden construction, the church was soon destroyed by termites. Thus, in preparation for a new solid church on the growing land, in August 1876, the Governor of Cochinchina – Victor Auguste Duperré organized a competition to select designs for the new church.
Architect J.Bourad was chosen with a modified Roman architecture project combining with Gothic characters. And he also won the bid to build this historic building. The original construction site was proposed in three places, and finally the Paris Commune Square was chosen. The front of the church turns to the Southeast, towards Nguyen Du Street, the back heads to the current Le Duan Street. The construction was done fairly quickly, nearly 3 years. On 11th April 1880, a blessing ceremony and inauguration ceremony of Saigon Cathedral was solemnly celebrated by Bishop Colombert with the participation of Cochinchina Governor – Charles Le Myre de Vilers.
All construction materials for the church such as cement, steel, tile, stained glass, bells, etc. were all transported from France. The outside of the buildings, for instance, was built totally of red bricks from Marseille without plastered or cemented. However, it still remains fresh orange-red color until today. In the beginning, the Church was called the State Church, because all the construction funding was provided by the French State, with an amount of up to 2,500,000 francs at that time.
In 1895, the church built two more bell towers, each tower was 57.6 m high and had 6 large copper bells. At the top of the tower is a crucifix with a height of 3.50m. Overall height from the ground to the top of the crucifix is 60.50m.
In 1958, the governor of the Saigon at that time, Father Joseph Pham Van Thien, ordered a statue of the Mother of Peace on white marble. The statue was carved in Italy and transported to Saigon by sea in 1959. After that, Société d’Entreprises Company has erected a statue of Our Lady on a stone pedestal that has been empty since 1945 in front of the church.
At the end of the ceremony of the National Congregation of the Holy Mother, Cardinal Aganianian from Rome blessed the statue in the afternoon of 17th February 1959. From this event, the Church was named Notre Dame Cathedral. On December 5, 1959, the Holy See allowed to hold anointment ceremony, conferring the Saigon Cathedral to the basilica. Since then, the official name of the cathedral is the Notre Dame Cathedral in Saigon.
In 1960, the Holy See erected Roman Catholic dioceses in Vietnam with three archbishops in Hanoi, Hue and Saigon. The church became the cathedral of the archbishop of Saigon to this day. 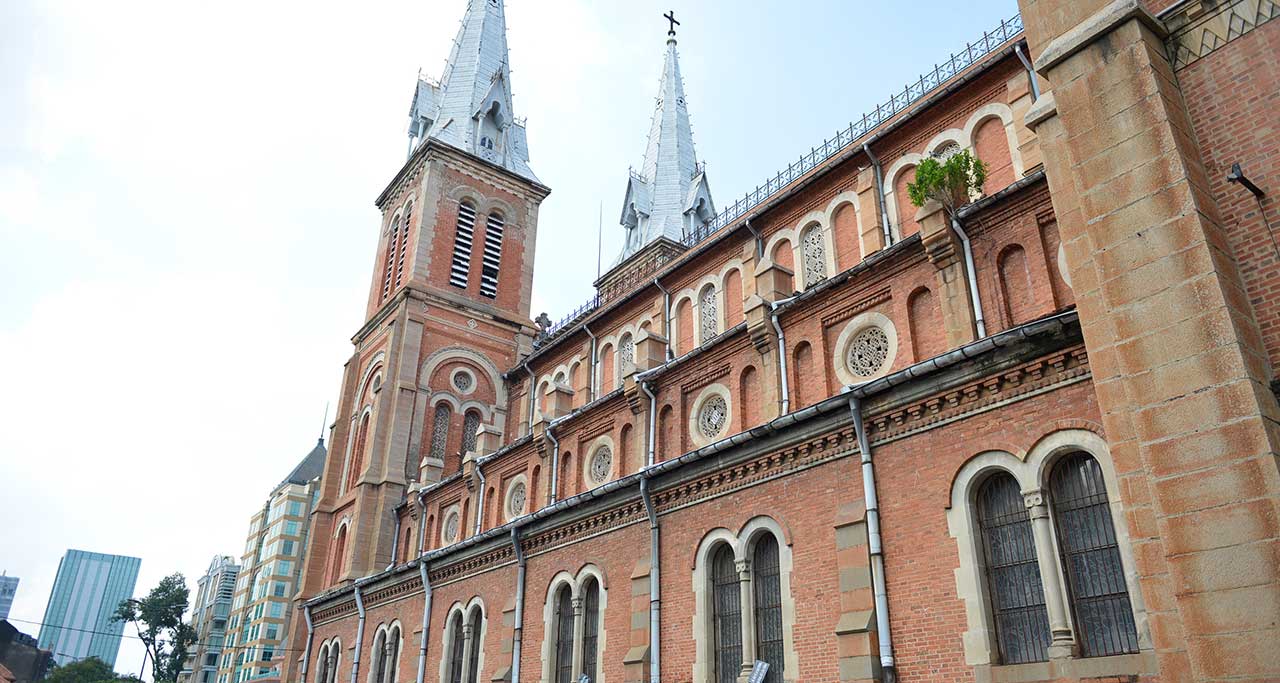 Know before you go

However, the cathedral is under is undergoing large-scale renovation, the renovation is expected to last for 3 years (6/2017 – end 2020). The church is closed to tourists during this time but remains a site of worship for Vietnamese Catholics every Sunday where a mass is held at 09.30 AM in both Vietnamese and English. You can still admire the scenery or take pictures from the surrounding grounds.

– Please dress appropriately and avoid disturbing the worshipers when visiting.
– Don’t use flashlight inside Cathedral.
– From the Notre Dame Cathedral Saigon, you can visit other attractions nearby:
o Central Post Office
o The Independence Palace
o People’s Committee Building
o Ho Chi Minh’s book street
o If you have time, please pass by Diamond Plaza, 30/4 Park and sip a cup of coffee while view the local life and enjoy peaceful moment.  This is most properous part of HCM City and most of cafe or shop in this area is more expensive than the rest of the country.
o You can also try several delicious street foods around the Cathedral area such as: Banh Canh Cua, Banh Xeo, Banh My, Bun Rieu, Bun Mam…