Vietnamese cuisine is a delicate combination of many spices and fresh ingredients. It is diverse, rich, tasty, exotic and different from region to region. Vietnamese cuisine is not only the dishes and recipes, but its unique culture. If you are a food lover and want to explore Vietnamese culinary culture, this following article is for you. 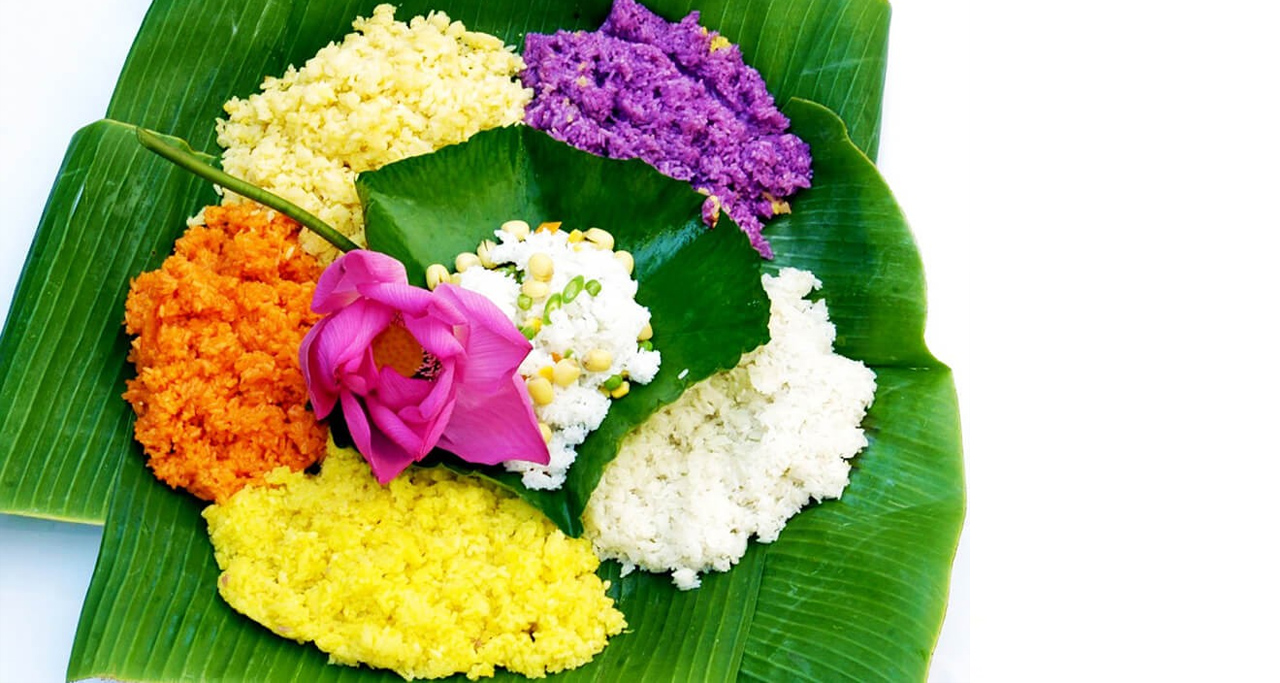 Vietnamese cuisine, like many other Asian countries, emphasizes the balance between yin and yang, which is beneficial for the body. When preparing Vietnamese dishes, the cook will combine yin – cool ingredients with yang – hot ones to make a balance. A dish with “cool” properties is served with “hot” spices and vice versa. For example, seafood (cool) is often cooked with hot chili, ginger and lemongrass (hot) or duck meat comes with ginger… Moreover, certain dishes are served in their respective seasons to provide the contrast in temperature between the heat of the food and environment. 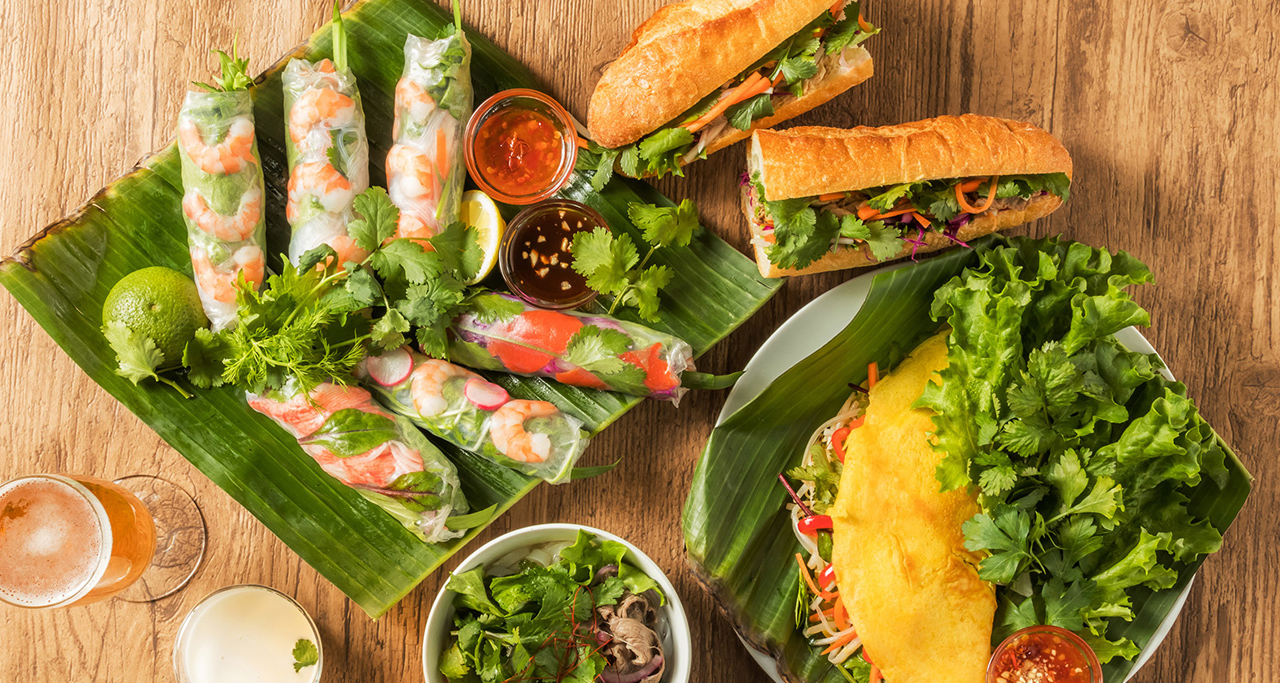 Unlike Western cuisine where meat is a main ingredients or Chinese dishes with a bit excessive use of oil, Vietnamese cuisine features with low quantity of fat. The dishes are mainly boiled, steamed, stewed, braised… in the aim of remaining the nutrients of the ingredients. Vegetables and herbs are widely used to provide complex flavors and healthiness. Vietnam cuisine is regarded as one of the healthiest cuisines all over the world. 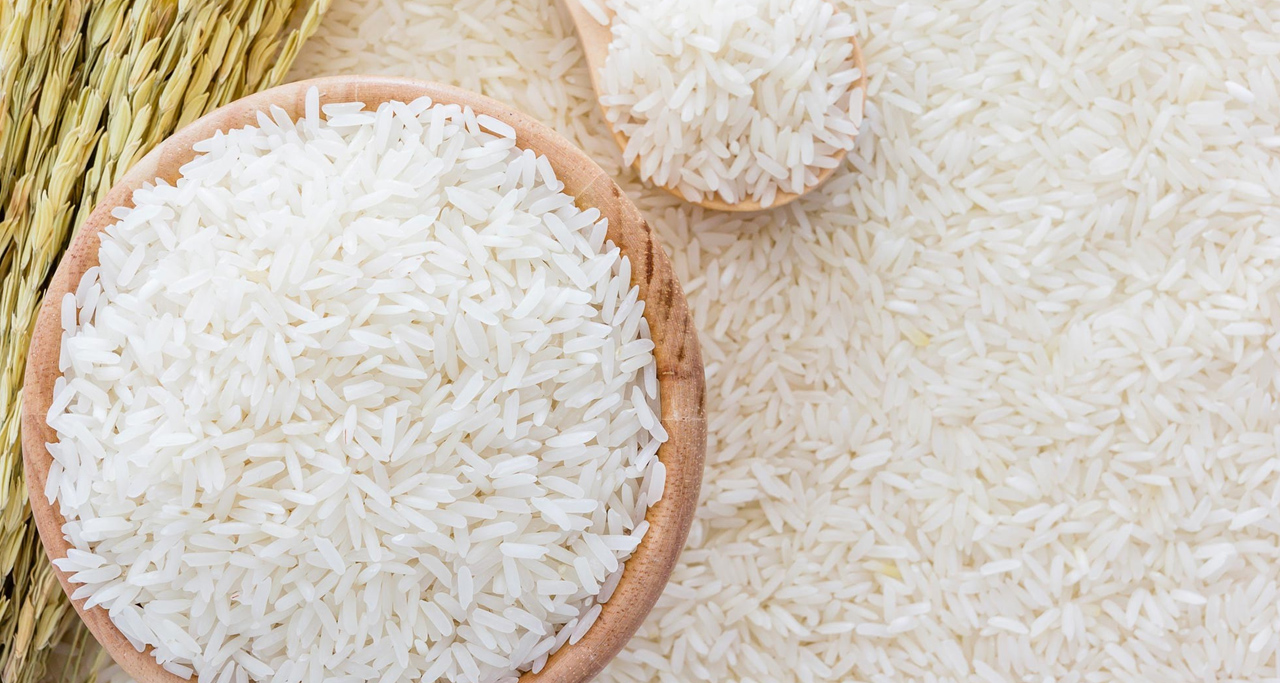 Vietnam is the second rice exporter in the world, after Thailand and Mekong Delta in Southern Vietnam is a rice bowl of the country. As a result, rice plays an important role in Vietnamese cuisine. Locals from generations to generations have been familiar with rice-based meals, accompanied by a variety of vegetable dishes, stir-fried meat or fish since their childhood. Rice appears at breakfast, lunch, dinner and dessert with many its variants such as noodles, vermicelli, rice paper… 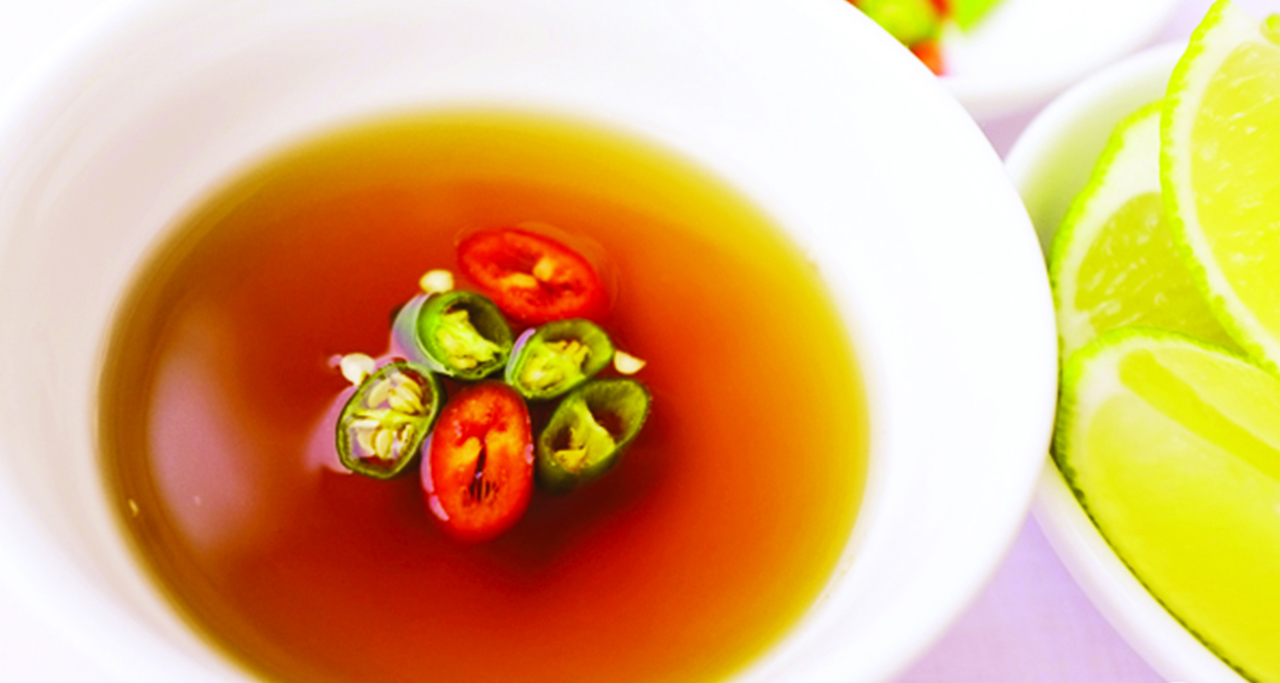 Fish sauce or “nuoc mam” is one of major spices of Vietnamese cuisine. Made from fermented anchovies and salt, fish sauce is used in almost Vietnamese dishes to increase sweet and salty flavors to the food. Besides adding or marinating directly in cooking procession, it is used to make dipping sauce. Each different dish will come along with a different dipping sauce but in general it includes lime juice, sugar, chili, garlic… mixed in distinct proportions. It might be considered as the soul of the dish, so no experience of Vietnamese cuisine is complete without a taste of “nuoc mam”. In a typical Vietnamese meal, all dishes are placed in a big round tray, in the center of table and all members of family will join the meal together. While eating, people can share opinions about the dishes and talk about daily basic topics in the eating time. This is a way family members interacts and bonds family relationship. If you have chance to join a meal with local family, you might be surprised when witnessing all family members using a same bowl of dipping sauce. It is one of the unique characteristics of Vietnamese food culture and also express the unity and sharing.

2. Diversity of Vietnamese Cuisine by Region

Vietnam is an agricultural country belonging to a tropical monsoon region. The country is divided into 3 distinct part: North, Central and South, along with 54 ethnic groups and each region has its own typical taste and flavor. This contributes to rich and diverse Vietnamese cuisine. However, there are quite a lot of things in common like the use of some traditional spices such as fish sauce, shrimp paste, soy sauce, rice and rice-products. 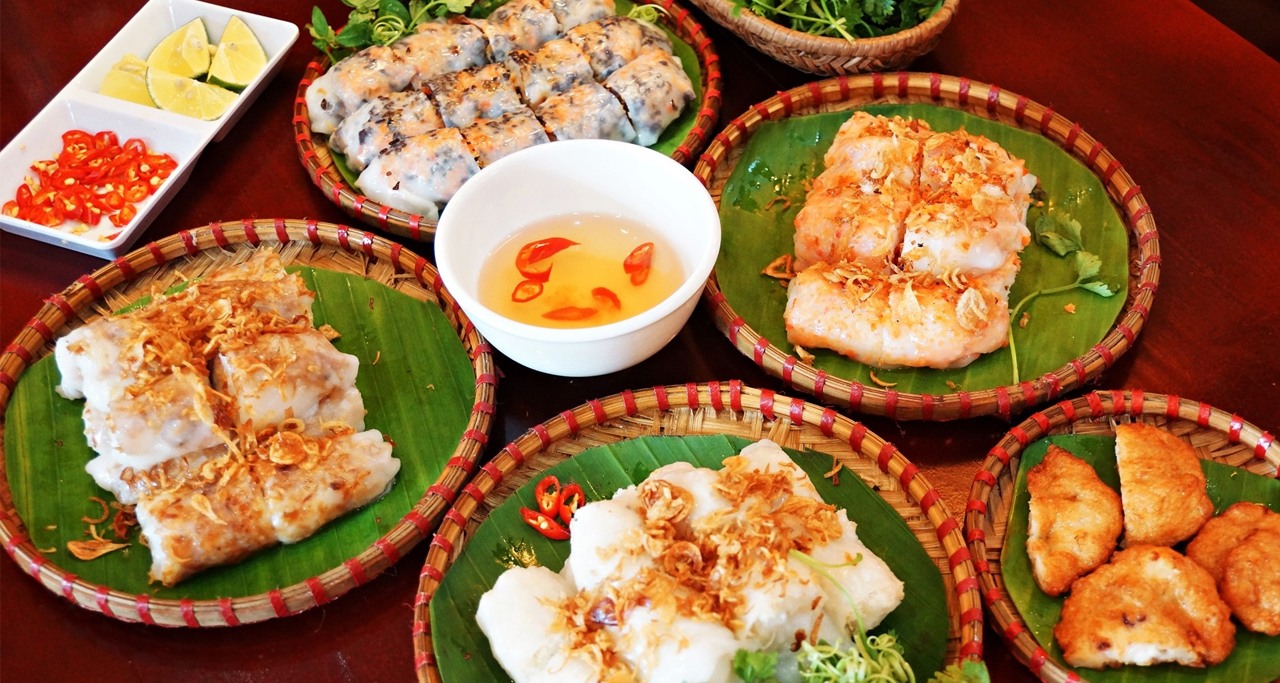 Northern cuisine is not biased towards any particular flavor: sour, spicy, salty, sweet or bitter. It is relatively light and balanced thanks to the subtle combination of many different flavoring ingredients, in which fish sauce, shrimp paste and limes are particularly popular. Besides, the foods in the region are often less spicy, fatty and sweet, compared to those of other regions in the country though the climate is colder. Northern people tend to consume a fair amount of vegetables and freshwater fishery such as shrimp, squid, crab, fish, clam and other shellfish…. The use of meats such as pork, beef, and chicken were relatively limited in the past.

Being rather reserved, Northern dishes adamantly follow the recipes of their predecessors since they value traditions and customs, and they are convinced that the recipes are the best, because of the experience accumulate throughout generations. Moreover, the characteristics of Northern cuisine are also reflected through holidays, like Tet Holiday, when it is always required to have “four bowls and six dishes” on the table with extremely elaborate preparation and eye-catching decoration. Hanoi’s cuisine can be seen as a representative of North’s with many famous delicacies such as “pho” (rice noodle), “bun cha” (vermicelli with grilled marinated pork), “cha ca La Vong” (grilled fish with turmeric and dill), egg coffee,… 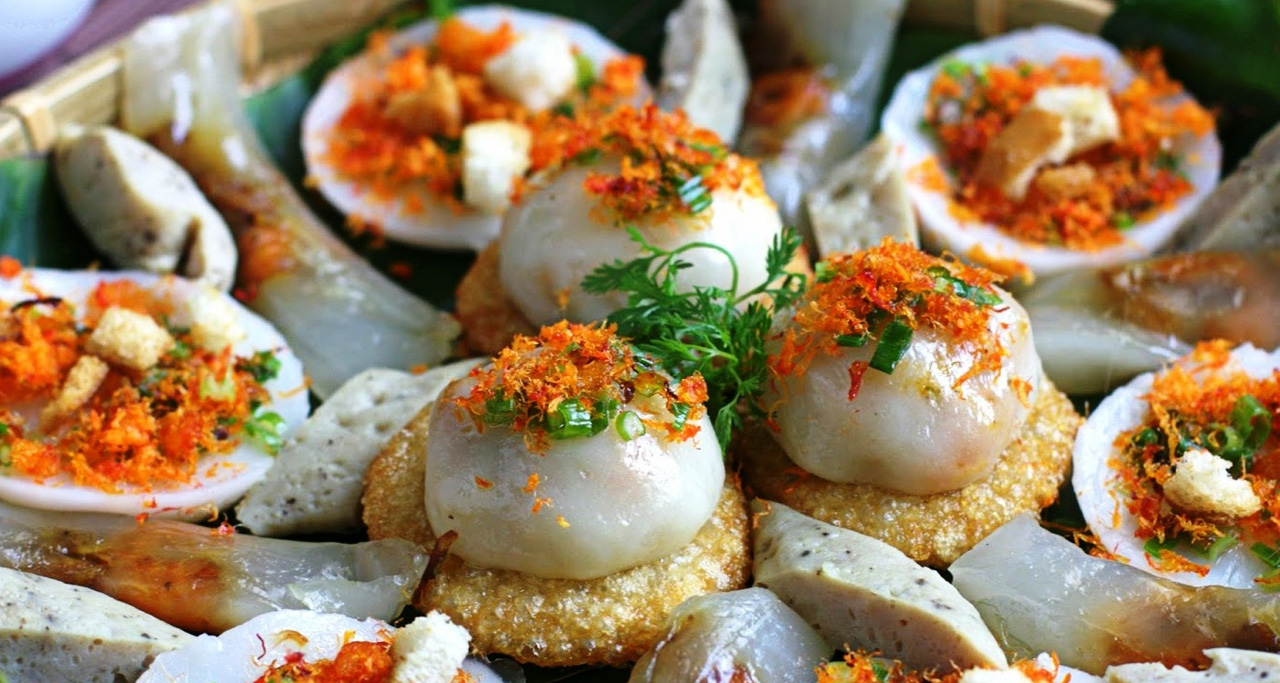 Central cuisine is known for its pungent taste. Chilies, black peppers and shrimp sauce are commonly used for dishes, making them hotter and spicier. Once the capital of the last dynasty of Vietnam, Hue is considered the cradle of Central cuisine, reflecting the influence of ancient Vietnamese royal cuisine. As a result, culinary in the region is very sophisticated in processing and presentation. Central people also have the habit of eating every meal in small portions like small bowls and small dishes. You can see this feature when trying some kinds of cakes in Central such as “banh bot loc” (tapioca dumpling), “banh beo” (steamed rice cake), “banh it ram” (fried sticky rice dumpling)… 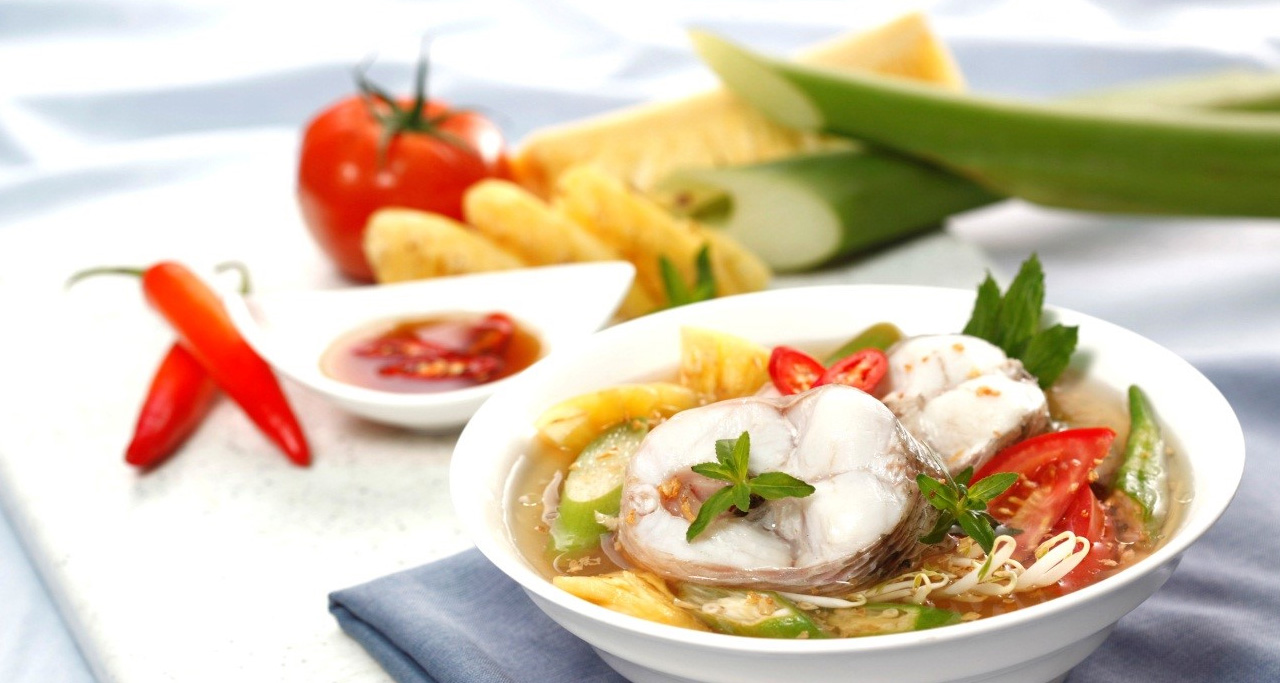 Colorful fish soup at a restaurant in Can Tho city

Southern cuisine has a tendency to taste sweeter than other two regions of Vietnam by adding sugar and coconut milk. Though food in the South is very simple and rustic with short cooking time to remain the freshness of ingredients, it is very diverse, flavorful and seasonal. It is also partly influenced by Chinese, Cambodian and Thai cuisine.

Thanks to the warm weather and fertile soil making the land ideal for a wide variety of fruits, vegetables, livestock and seafood. There are many exotic dishes in South Vietnam, sometimes making you scared to try such as coconut worms, snakes, rats…. Besides, some of other famous specialties in South Vietnam you should not miss are “com Tam” (Vietnamese broken rice), “hu tieu” (pork and seafood noodle soup), “banh mi” (Vietnamese sandwich), “lau mam” (fermented fish hot pot),… Vietnam consists of 54 ethnic groups living in geographical regions nationwide. Each group has its own distinctive tradition and food culture, making Vietnamese cuisine more diverse and richer. Most of ethnic minorities often reside in highlands and remote mountainous areas. Though their foods is not varied, culinary techniques are very unique and not inferior.

Hill tribes in Sapa, Ha Giang,… are famous for five color sticky rice. All colors are made from natural ingredients: baby jack fruit for the red, turmeric for the yellow, pineapple leaf for the green and violet glutinous rice leaf for the purple…  The ethnic people have turned the simple dish of rice into a colorful and unique food of the mountainous region. Many other specialties of the Vietnamese ethnic minorities include smoked buffalo meat, grilled piglet with special leaf called “mac mat”, black “banh chung”,… 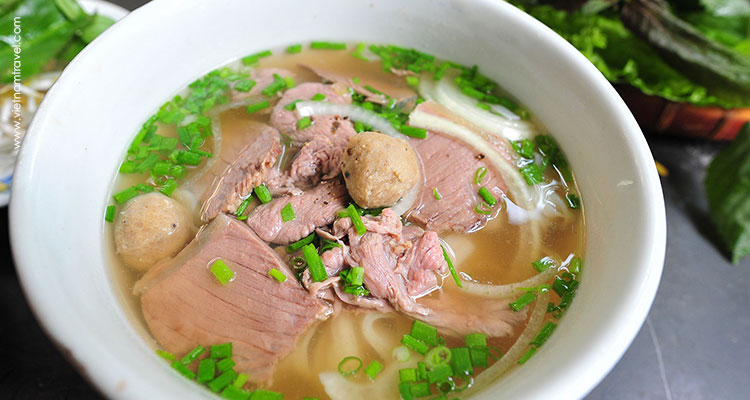 Beef noodle – The most popular breakfast in Vietnam

Listed as one of the world’s 50 best foods by CNN, “pho” is definitely a must-try dish when you come to Vietnam, especially in the capital of Hanoi. It is basically rice noodles served with broth and beef or chicken. Since broth is the star of this dish, Northern people put much effort into the first step of choosing ingredients to cooking techniques. It is normally made from 10 – 15 different ingredients, including beef ribs, ginger, cinnamon, black pepper, star anise and many other spices to make it aromatic, sweet and clear.

“Pho” is served both in street vendors or fine restaurants and you can have “pho” for breakfast, lunch or dinner. It is much better to add in the bowl of “pho” a little lemon juice, chili sauce and garlic – based on your own personal taste. 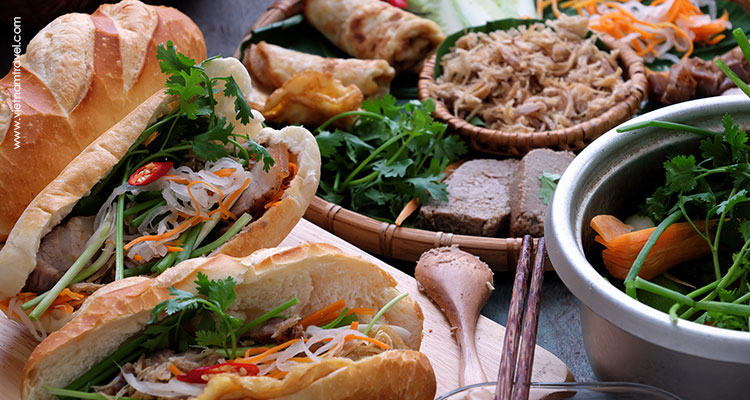 “Banh mi” is a popular breakfast for Vietnamese people

“Banh mi” is one of the most famous street foods in Vietnam and you can easily it in every corners of streets. It is filled with many different kinds of ingredients such as grilled pork, grilled chicken, pate, carrot, fried egg, sausage, coriander, cucumber, tomato, chili sauce, …. 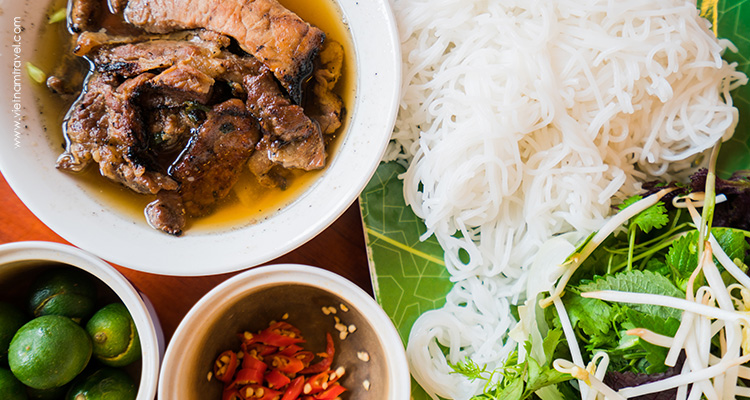 “Bun cha” has become more famous all over the world when the US President Barack Obama and Anthony Bourdain took this dish when visiting Vietnam in 2016. It is blended with vermicelli, grilled pork on bamboo sticks, and sweet-and-sour sauce. Fragrant herbs are often added to create an attractive fragrance and taste. 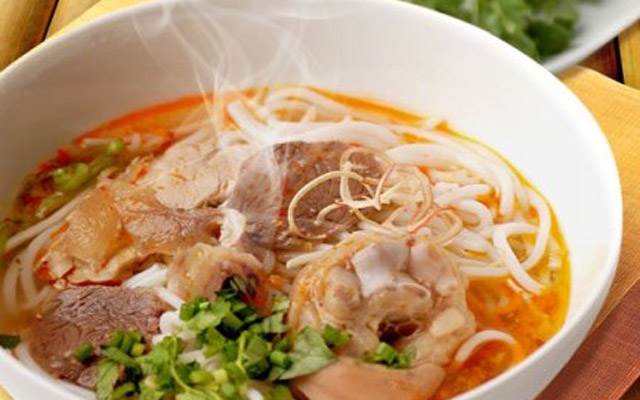 “Bun bo Hue” is a popular Vietnamese noodle soup, and one of the most typical foods in Hue. Unlike “pho”, this dish is a combination of sweet, sour and spicy and the fine combination of ingredients makes the food famous. A bowl of “bun bo Hue” is added thin slices of beef shank, chunks of boiled oxtail, pig’s knuckles, blood,… and rich broth. It is commonly served with a plenty of herbs like sprouts, lime wedges, cilantro sprigs, onions, and sliced banana blossom. 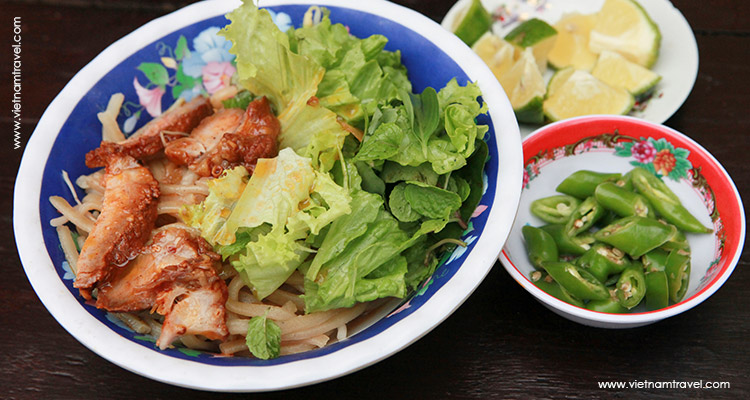 Cao Lau is an essence of Hoi An cuisine

Cao Lau is a specialty dish of Hoi An. The special feature of Cao Lau is its noodle which must be made with the water from Ba Le well, a one-hundred-year-old well in Hoi An to knead the dough. Besides, the rice to make noodle is of the local rice variety. The rice used is neither freshly harvested nor too aged. This dish comprises of the signature noodles, thinly slices of barbecue pork, pork crackling, bean sprouts, crispy croutons, lettuce and herbs, it is then finished with a spoonful of stock.

There is an endless list of famous and delicious dishes in unique Vietnamese cuisine. It is hard to describe it by words except for trying by your own senses. So let’s plan a trip to Vietnam and spend time to explore this beautiful culinary culture. 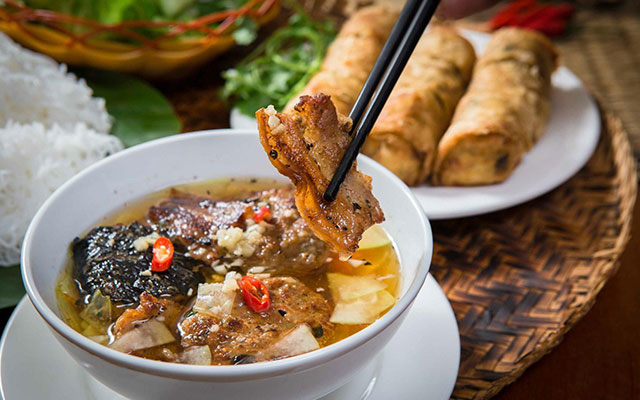 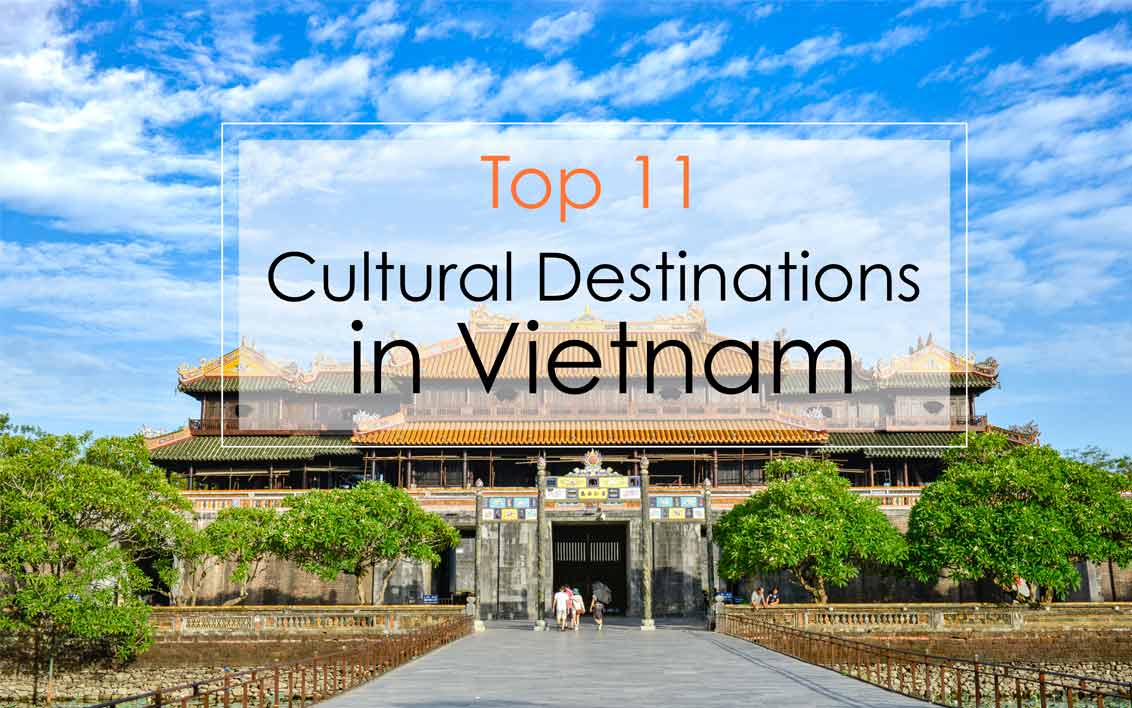