Together with long history of expanding the border and defending the country, traditional martial arts have been an indispensable feature when it comes to Vietnamese culture. These martial arts are the traditional cultural heritage of Vietnam, created by Vietnamese or Vietnameseized from the borrowed martial arts worldwide, to make them suitable with the Vietnamese’s state, culture, and philosophy. 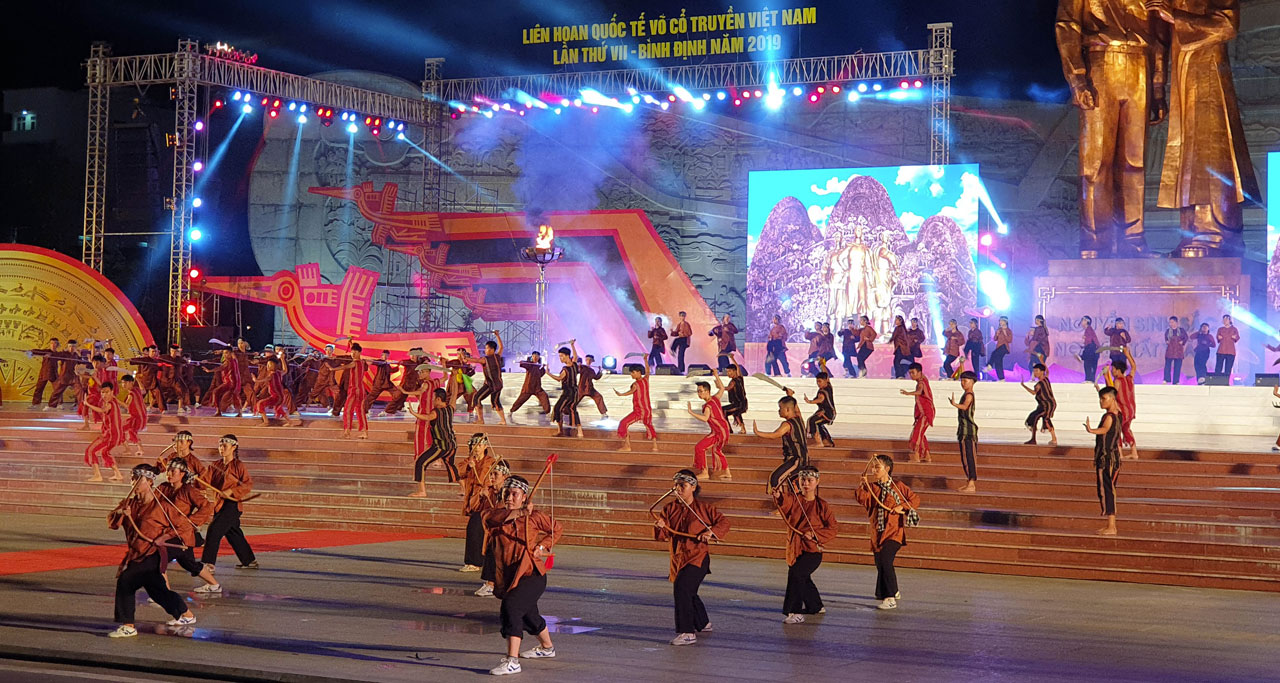 The basic philosophy of Vietnamese martial arts is to take weakness against strength; take minority against majority; take shortage against length; the attack is simple but dangerous, effective, agile and unpredictable; the defense is extremely discreet, tight and highly realistic.

Let’s learn more about this proud culture of Vietnam with us through this post! 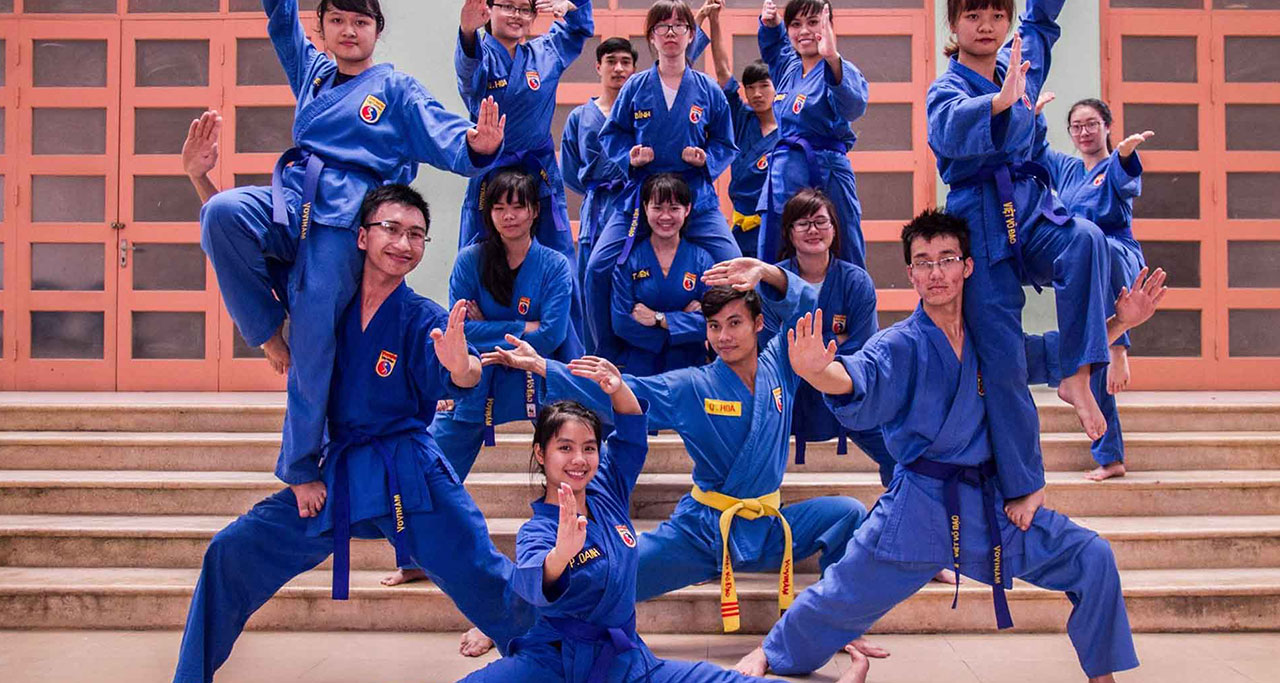 Back to the past, in Vietnam, when the French took over Dai Nam, traditional martial arts sects were banned by the French colonialists because the leaders of the anti-French insurrection movements were all skilled people in Vietnamese martial arts.

Around 1925, Vietnamese traditional martial arts were restored together with other foreign martial arts introduced into Vietnam, such as Boxing, Shaolin…During this period, many legendary masters left a reputation.

Before 1945, the name of the Four Great Masters, Bai-Mua-Cat-Que, was well known. They trained countless patriotic youths who were ready to defend and protect the homeland, creating a widespread martial tradition all over the five continents.

After 1945, Mr. Que had his noble disciples such as Nguyen Van Quy; Dang Van Hinh and Professor Dr. Dang Quang Luong. The 3 remaining masters from Four Great Masters were called “Tam Nhut” (three suns), including Han Bai, Ba Cat, Bay Mua. They were honored in having great merit in restoring the traditional Vietnamese martial arts during this period.

Until the French left Vietnam, the Ngo Dinh Diem government in South Vietnam continued to maintain a restoration of Vietnamese martial arts under the leadership of the Vietnam General Martial Arts (VABA), and the Vietnam Martial Arts Association. During this time, three other masters were known as “Tam Nguyet” (three moons) in following the restoration and development of Vietnamese martial arts, including: Truong Thanh Dang, Quach Van Ke and Vu Ba Oai.

However, in South Vietnam in 1960, a group of Nhu Dao martial artists led by Master Pham Loi who joined the coup against Ngo Dinh Diem was defeated. Therefore, from 1960 to 1963, Ngo Dinh Diem continued to ban martial arts groups from developing (including Vietnamese martial arts).

In 1964, martial arts continued to operate, including Vietnamese martial arts. During this period, traditional martial arts strongly grew no less than other countries in the region, such as Thailand, Indonesia, Hong Kong, Taiwan, Laos, Cambodia … Four masters: Tu Thien-Ho Van Lanh, Tran Xil, Xuan Binh and Ly Huynh have been honored in training many elite martial arts fighters for the Vietnamese martial arts village, especially those who brought the victory for Vietnam in international arena. They were awarded the Diploma of Merit for their glorious achievements to the country. Since then, the martial arts world called these four masters as “Tu Tu” (four bright stars), following their previous classes of “Tam Nhut” and “Tam Nguyet” in the restoration and promotion of Vietnamese martial arts traditions. 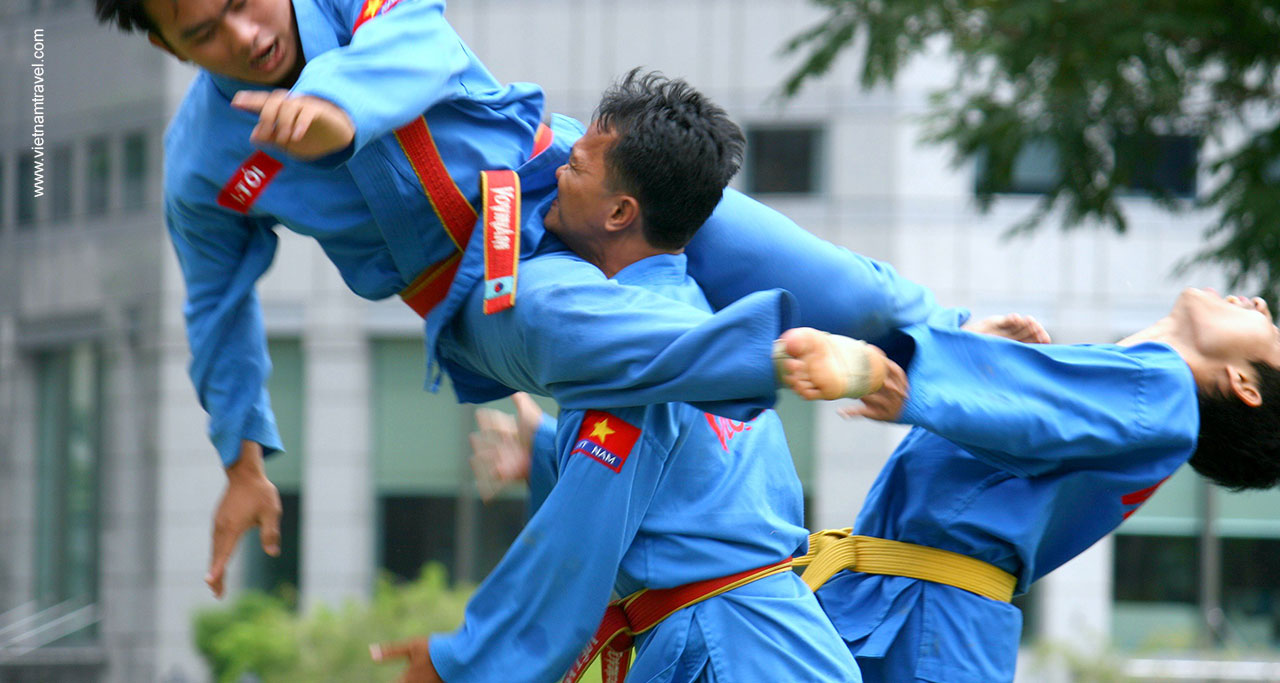 Vovinam is practiced with and without weapons by the use of the hands, elbows, legs, knees

After 30 April 1975, Vietnamese martial arts stopped developing for a while due to the chaotic situation of security.

In 1979, in the event that the Chinese army and Khmer Rouge army attacked Vietnam, the Vietnamese state restored martial arts activities, including traditional Vietnamese martial arts, to gather young people to practice indomitable spirit and ready to fight to protect the homeland.

After that, martial arts federations formed to manage the martial arts movement, including the Vietnam Traditional Martial Arts Federation (1991). However, for many reasons, from then until 2007, Vietnamese martial arts have not been paid attention as other martial arts with international competitions such as Taekwondo, Judo, Karatedo, Wushu, Pencak silat, Boxing, Vovinam …

According to experts, traditional martial arts in Vietnam includes 5 sects. 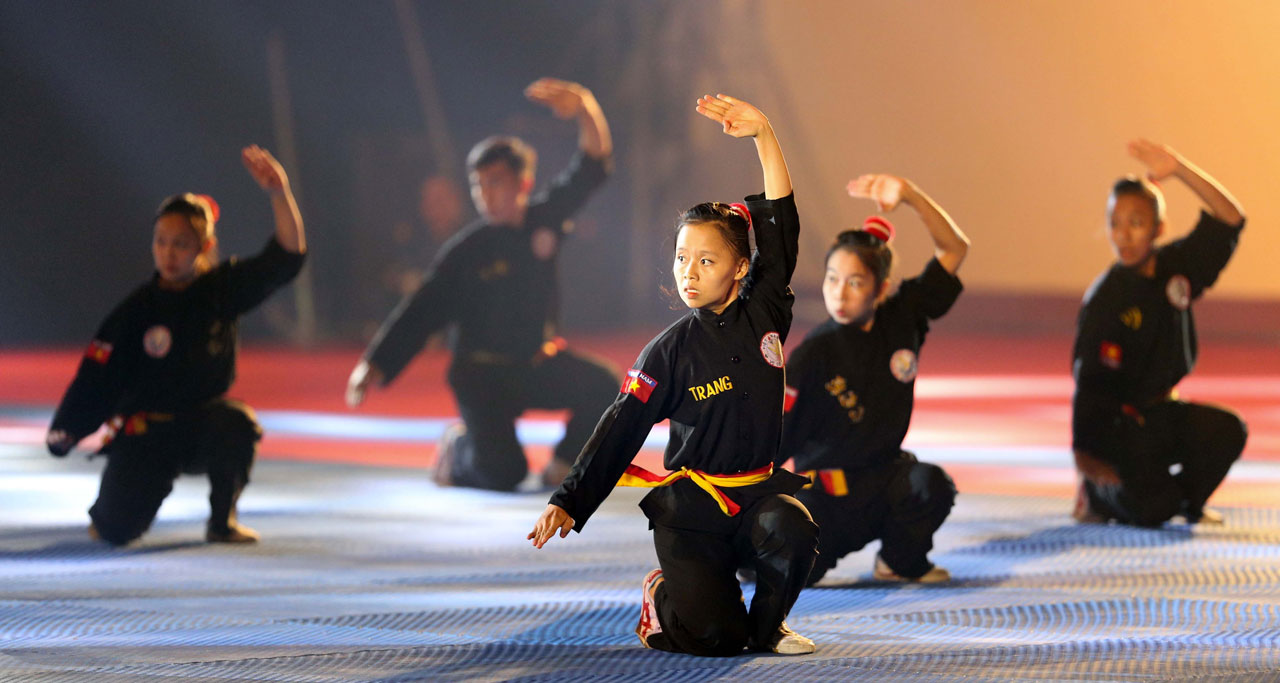 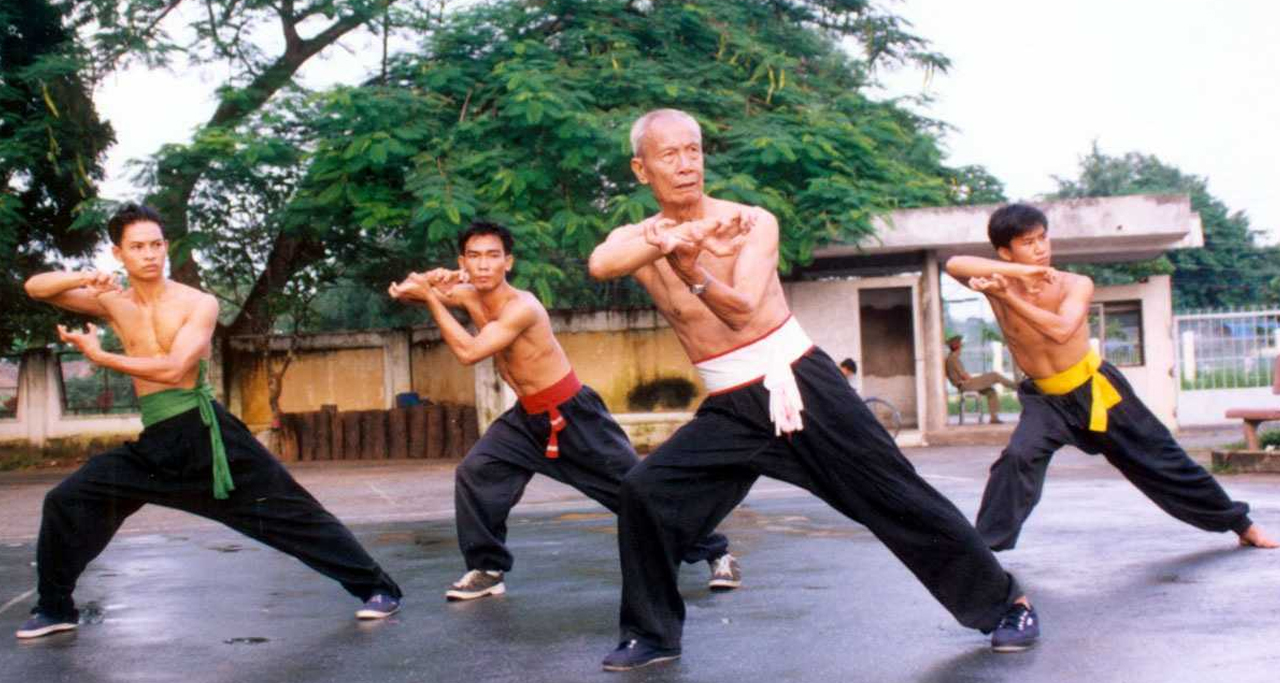 Binh Dinh is the cradle of martial arts in the Central associated with the Tay Son Dynasty (1778-1802). In the 18th century, a number of famous masters from North Vietnam and China moved to settle in this area and taught martial arts to the local people. From then up to now, the Binh Dinh group includes many martial arts from Binh Dinh and the surrounding areas such as: Roi Thuan Truyen, An Thai, An Vinh and other forms of martial arts taught by families or masters such as Tay Son Nhan, Thanh Long martial arts, Binh Dinh Sa Long Cuong, Binh Dinh martial arts, Tan Son Bach Long, Tay Son Thieu Lam, Binh Dinh Gia, Tien Long Quyen Dao … Besides the martial land of Binh Dinh, the central provinces – Central Highlands are also the cradle of many unique traditional martial arts, such as Tan Khanh Ba Tra in Khanh Hoa, Tan Gia Quyen in Quang Ngai. A typical example of those who studied Tan Gia Quyen from the young age and successfully applied its techniques in Muay Thai competition, that is  Nguyen Tran Duy Nhat – a martial artist competing in the Muay Thai Flyweight in ONE Championship. 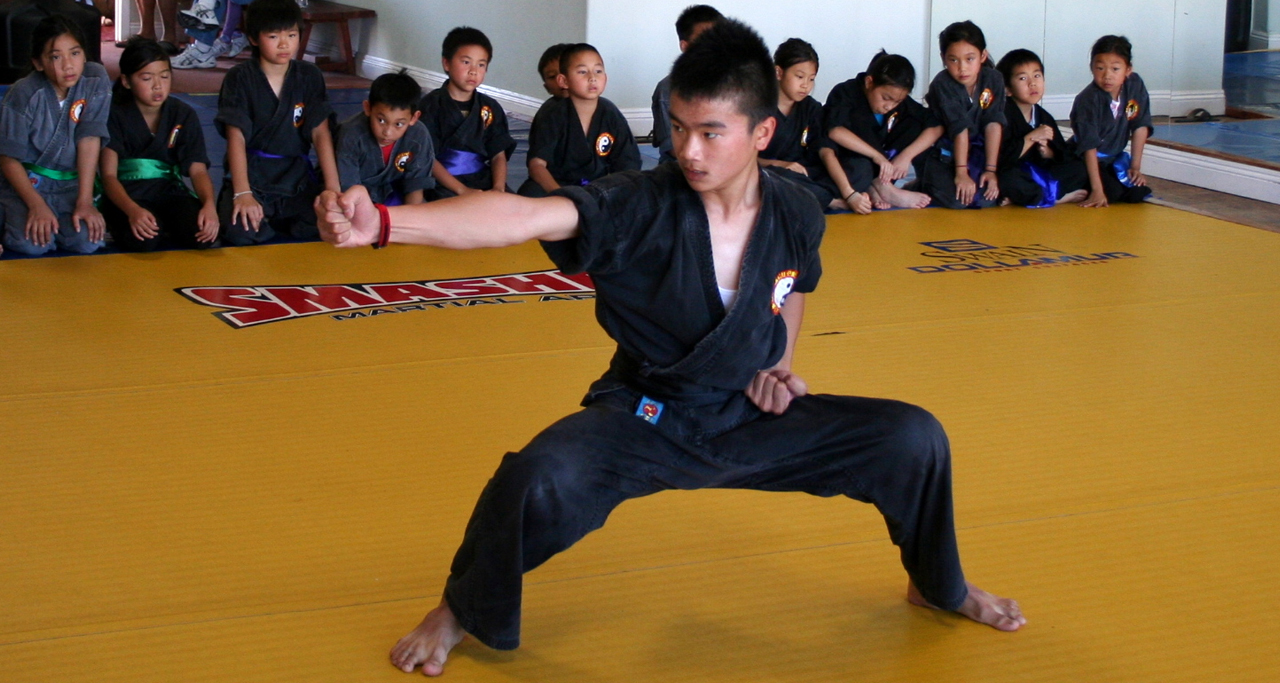 The seriousness and enthusiasm in practice

Southern martial arts appeared along with the process of opening and settling of the Vietnamese in the 18th and 19th centuries. After stopping in the South Central Coast, the Nguyen Lords continued to expand their territory to the South and immigrants from Quang Nam, Da Nang, Quy Nhon to reclaim wasteland in the Mekong Delta. Many famous masters in the South were compared to “Tam Nhat”; “Tam Nguyet” and “Tu Tu”. Many Southern martial artists participated in the competitions and won against masters from neighboring countries such as Cambodia, Laos, and Thailand. The diverse backgrounds of the Vietnamese in the South have created the Southern martial arts systems with a rich origin mixed from groups of Binh Dinh, Thanh Hoa, Nghe An, the Red River Delta and even martial originating from China (such as the Shaolin martial arts), the Cham martial arts, the Cao Mien martial (Cambodia). Some famous sects in the South include Tan Khanh Ba Tra, That Son Quyen (An Giang), Am Duong Vo Phai, Kim Ke, Thanh Long Vo Dao… 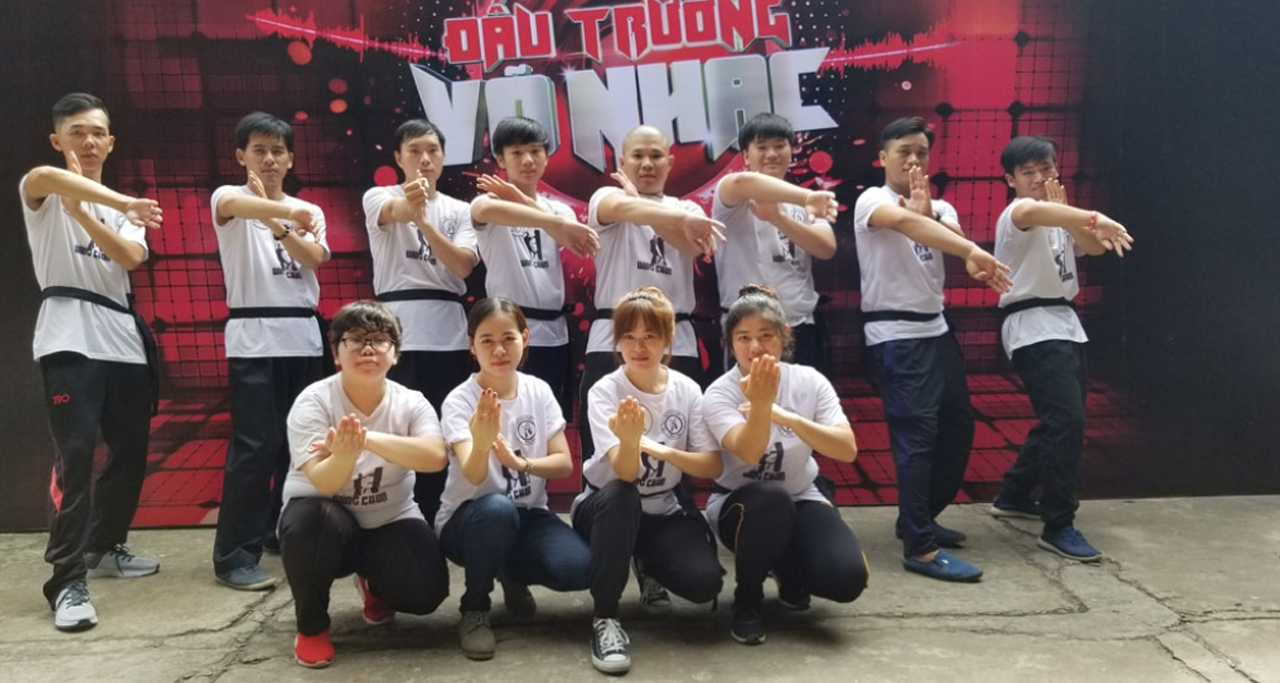 Young people are eager to participate on arena of martial arts 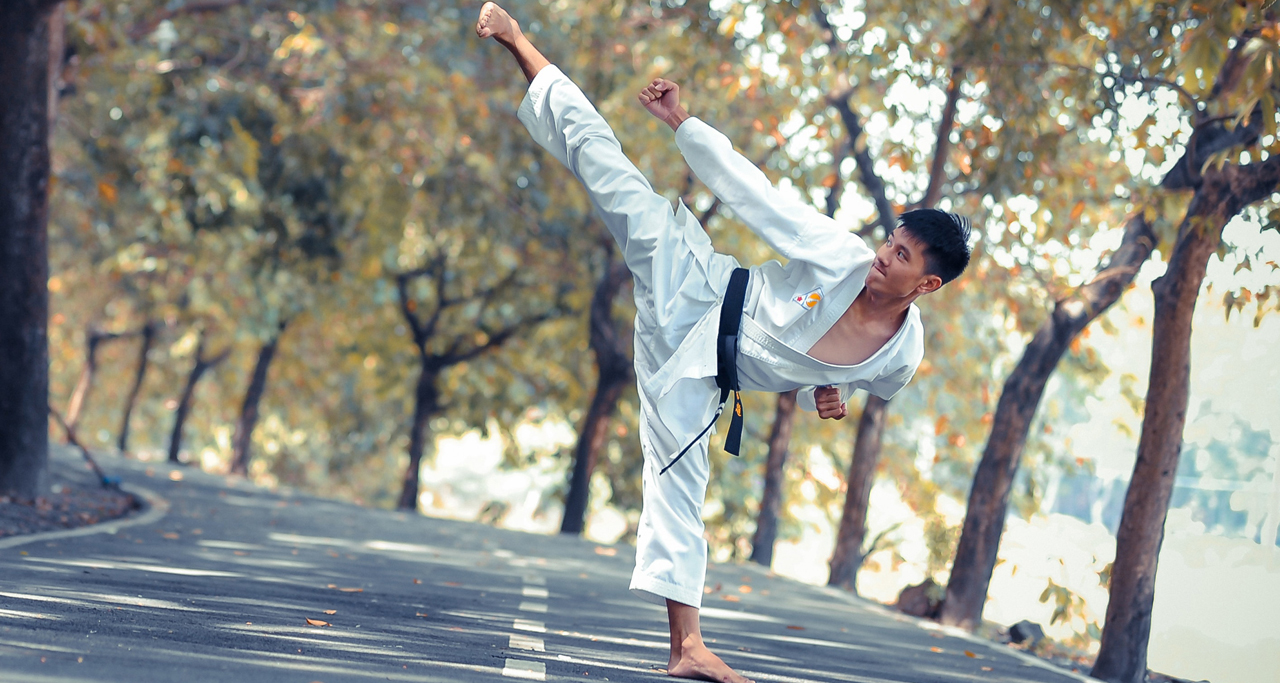 The martial spirit is shown at anytime, anywhere

The Federation strives to develop Vietnamese traditional martial arts to 100 countries and territories by 2030.

– Usually using in battle, fighting against foreign aggression, conquering the wild nature, fighting and hunting tigers and wild boars, protecting houses, villages, and robbery.
– Suitable for many types of terrain.
– Practical, flexible.
– “Di cong vi thu, di nhu che cuong, di doan che truong” – focusing on crawling close to the ground, immediately pressing the opponent and then launching a decisive attack, very suitable for the small Vietnamese figure.
– Proficient training must be with nature to get fresh air in order to increase the qigong in the body, then the attack will be stronger. 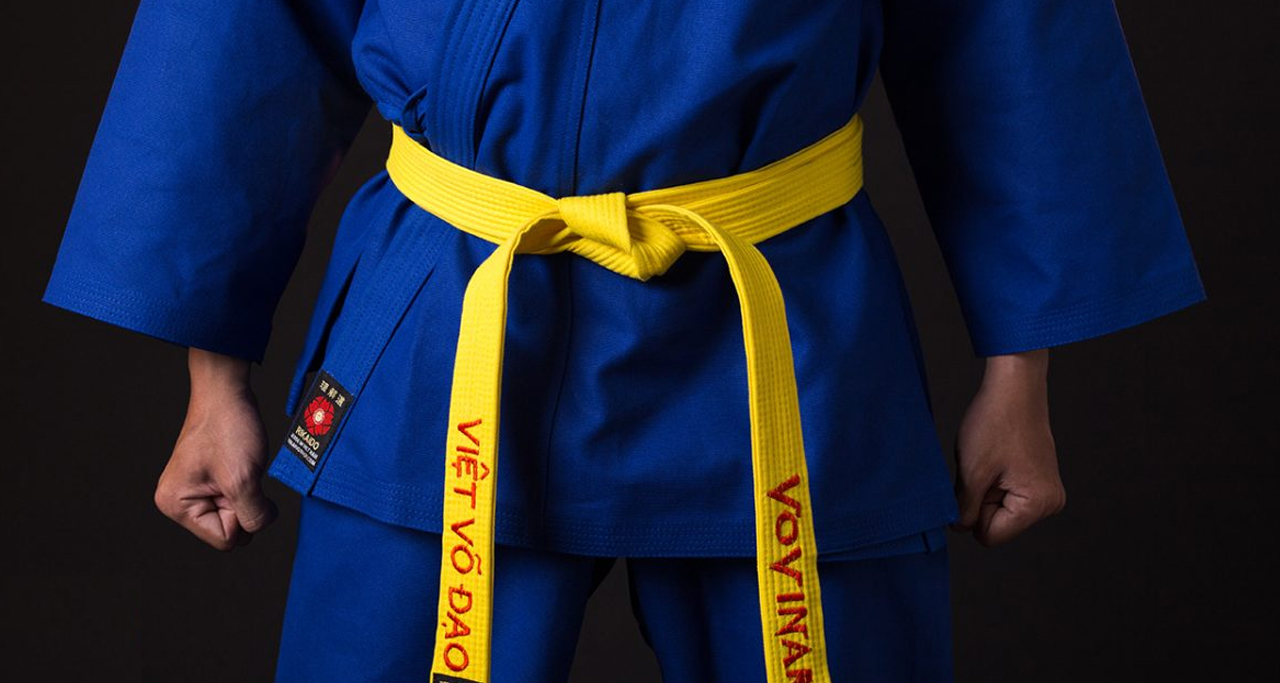 Yellow belt of Vovinam symbolizes the “skin deep” internalization of the martial art and the philosophy. A person who wears this with one or more stripes is considered an instructor

Belt and Color
– Belt is made of soft fabric with the width from 6 to 8 cm, embroidered with the word “Vietnamese Traditional Art”.
– The belt color of Traditional Vietnamese Martial Arts is divided into 5 colors according to class and ranked from low to high as follows:
a) Black belt;
b) Green belt;
c) Red belt;
d) Gold belt;
e) White belt.

Therefore, the study and preservation of martial arts sects definitely play a very important position contributing to the crystallization of the fine traditional values ​​of the country’s martial arts.

We hope that the above information are helpful for you to better understand about traditional Vietnamese martial arts. If you have any requirement about tours in Vietnam or other necessary information, don’t hesitate to contact Vietnam Travel team for instant assistance! 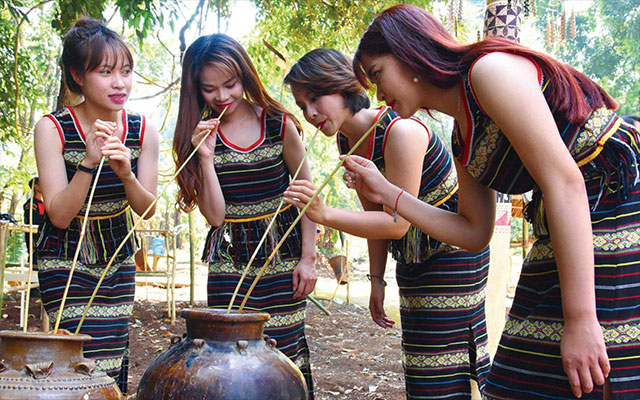