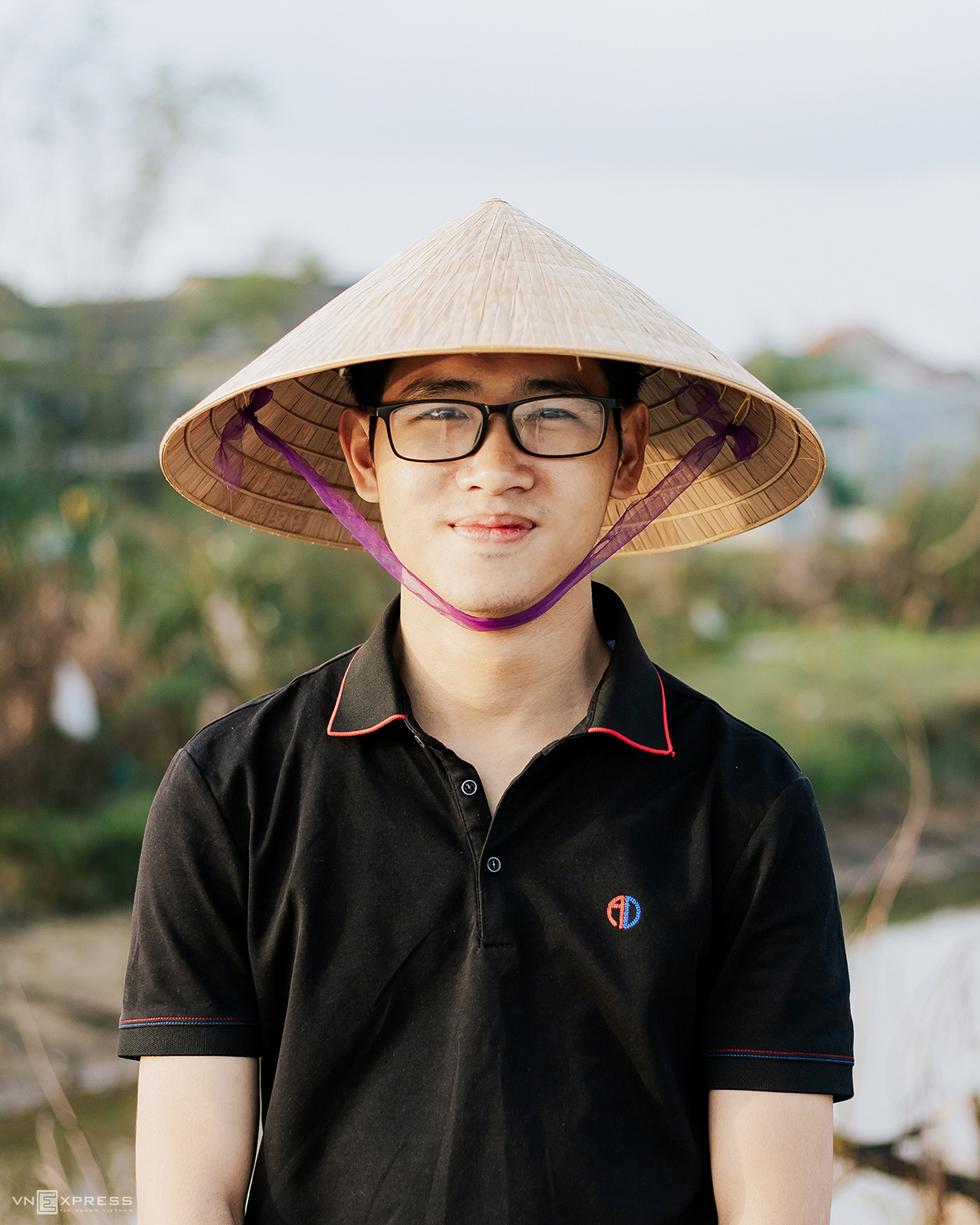 Le Van Anh Tai, who was born in 1997, and originated in Quang Nam, started his journey to capture the beautiful landscapes of Vietnam for more than one year. Up to now, the guy working in the media industry has visited about 30 provinces. The photo gallery of Vietnam which was captured from above and posted on travel pages by him received great attention from travel lovers. Instead of sticking to the classic horizontal and vertical scale, Anh Tai chose the 4:5 ratio to bear the stamp of his photos. 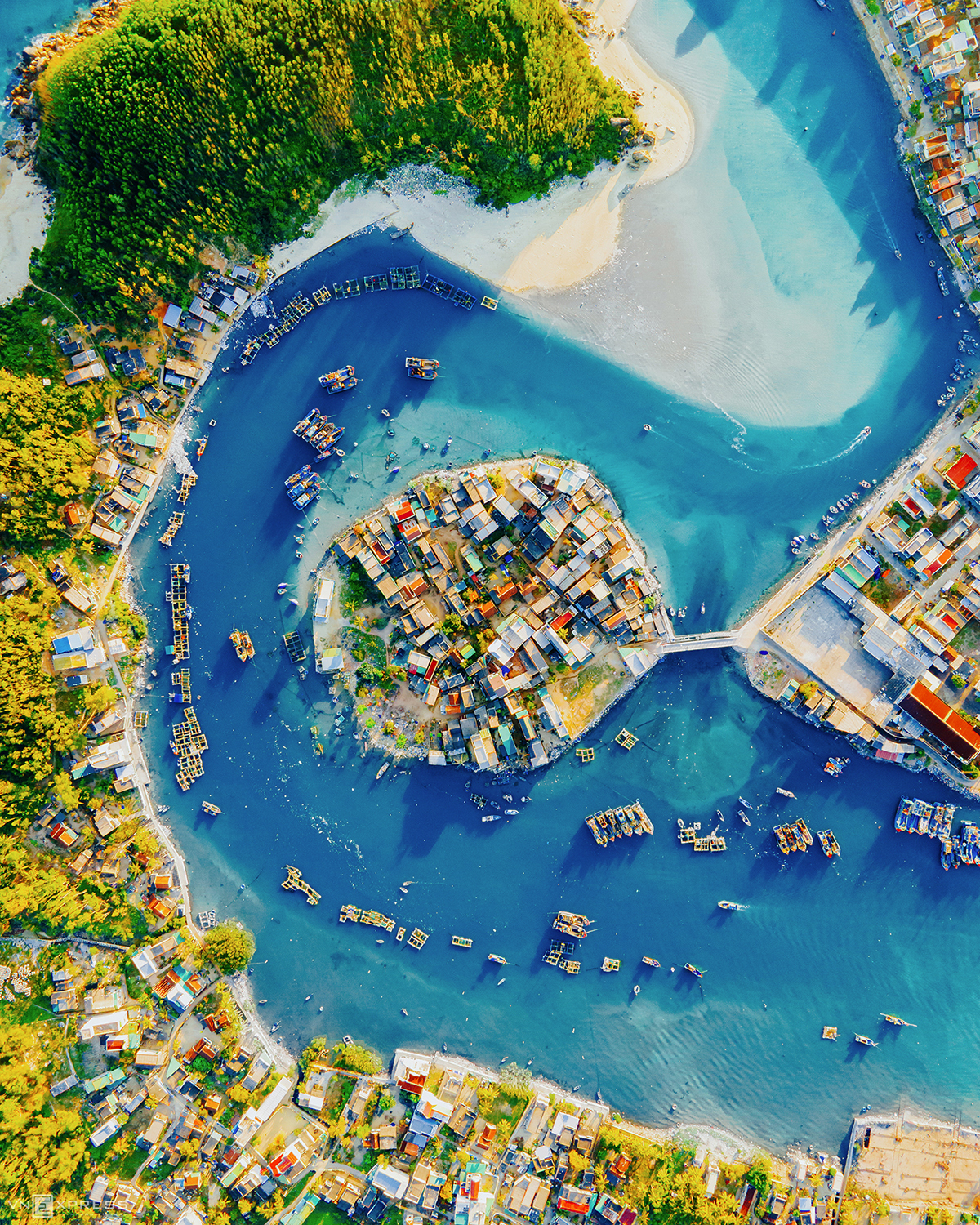 Con Hamlet (Quang Ngai), a small islet in the middle of the river

Con Hamlet (Quang Ngai), a small islet in the middle of the river, is vividly captured. According to Anh Tai, he took the snapshot of almost photos while going to work. All shoots weren’t prepared in advance so the post-processing step is very important. On average, it takes him about 10-30 minutes to post-process a photograph. 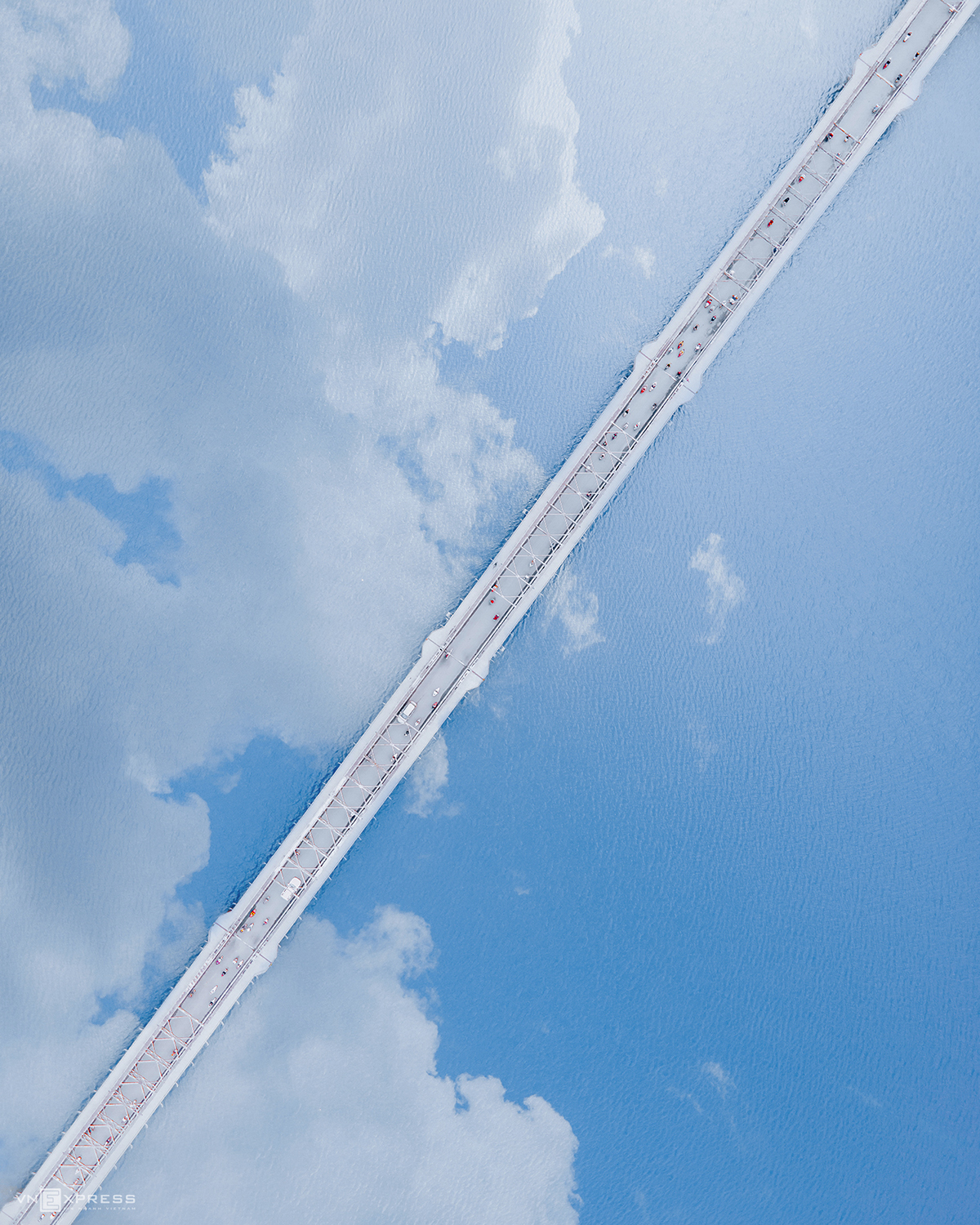 The image of Truong Tien Bridge (Hue) especially attracted the attention of the cyber community. “Tear the sky”, “Like a heaven bridge”, “Like a white scratch in the sky when the plane flies across” … are the comments for this photograph. He told that he was so lucky to capture this shoot. While controlling the drone to fly across the bridge, he incidentally saw the tree’s shadow reflecting into the lake. Therefore, he decided to adjust the drone to fly up to 300m and caught this scene. 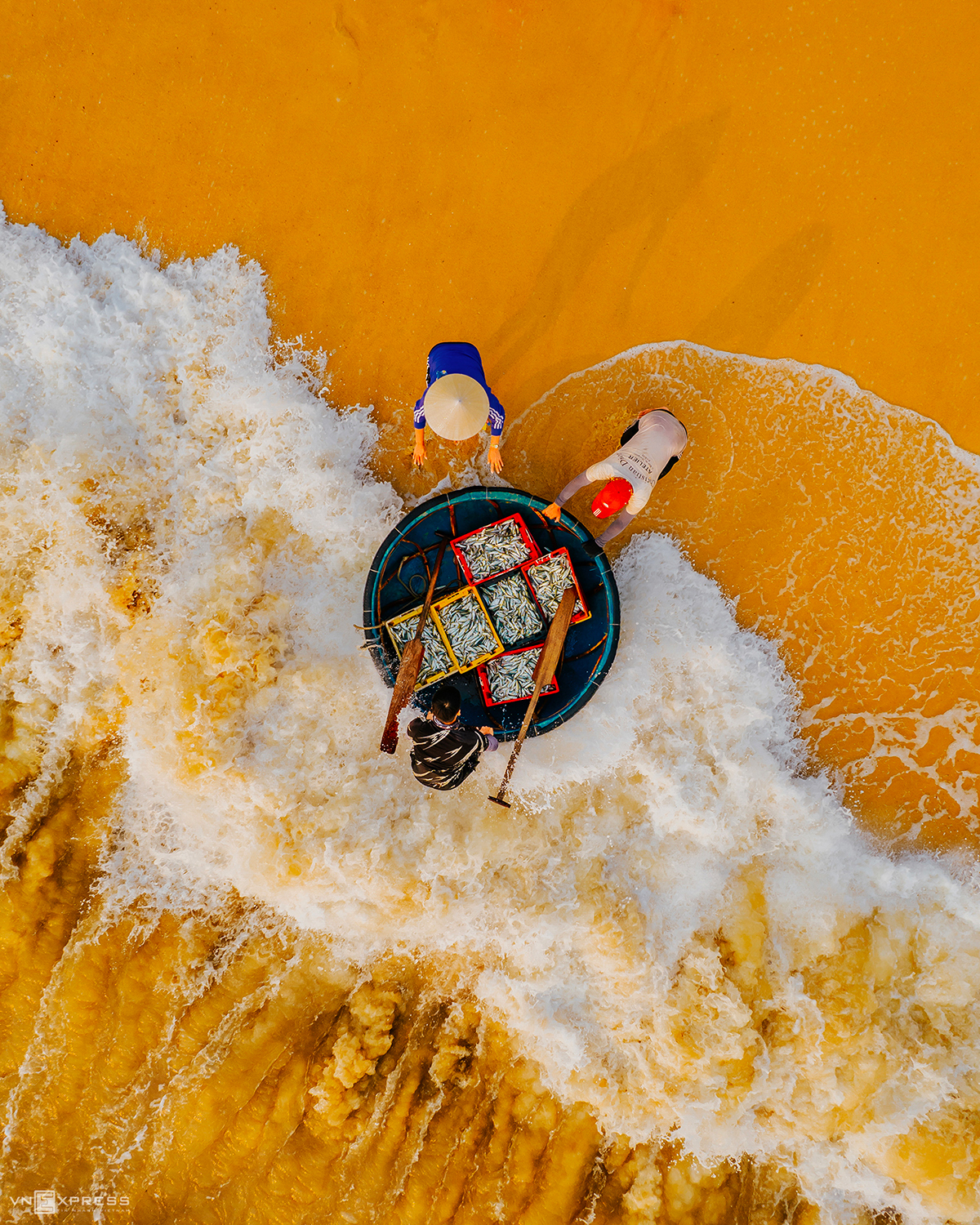 Early morning Nhan Trach Fish Market (Quang Binh) was dyed into golden color in the dawn light. Fisherman pulled basket boats with batches of fishes caught in the previous night to the shore. 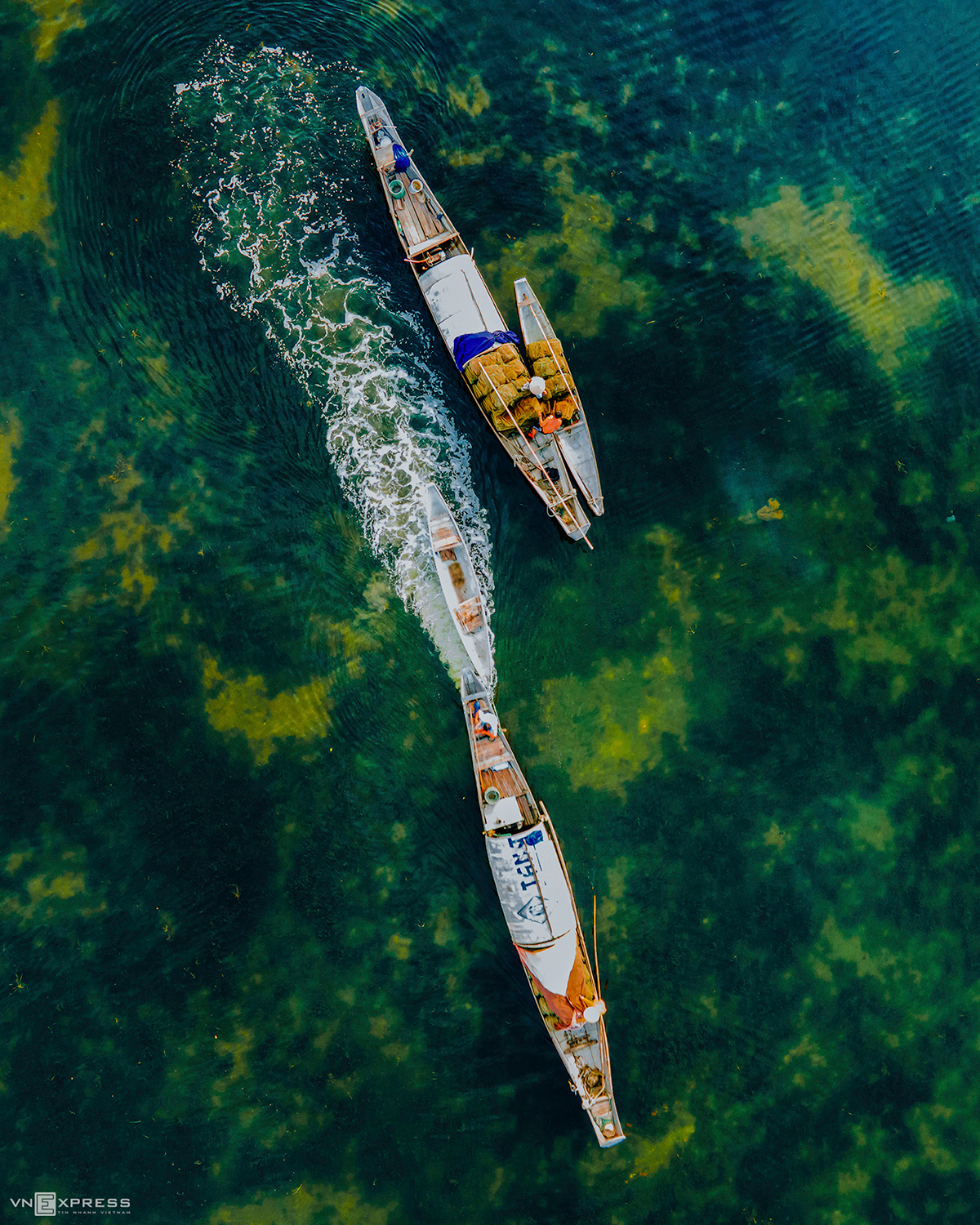 In Ngu My Thanh Floating Market (Hue), the thick layer of moss on the bottom of Quang Loi Lagoon can be clearly seen from the above. Tai said that this scene looked like an oil painting when observed from a bird’s eye view. 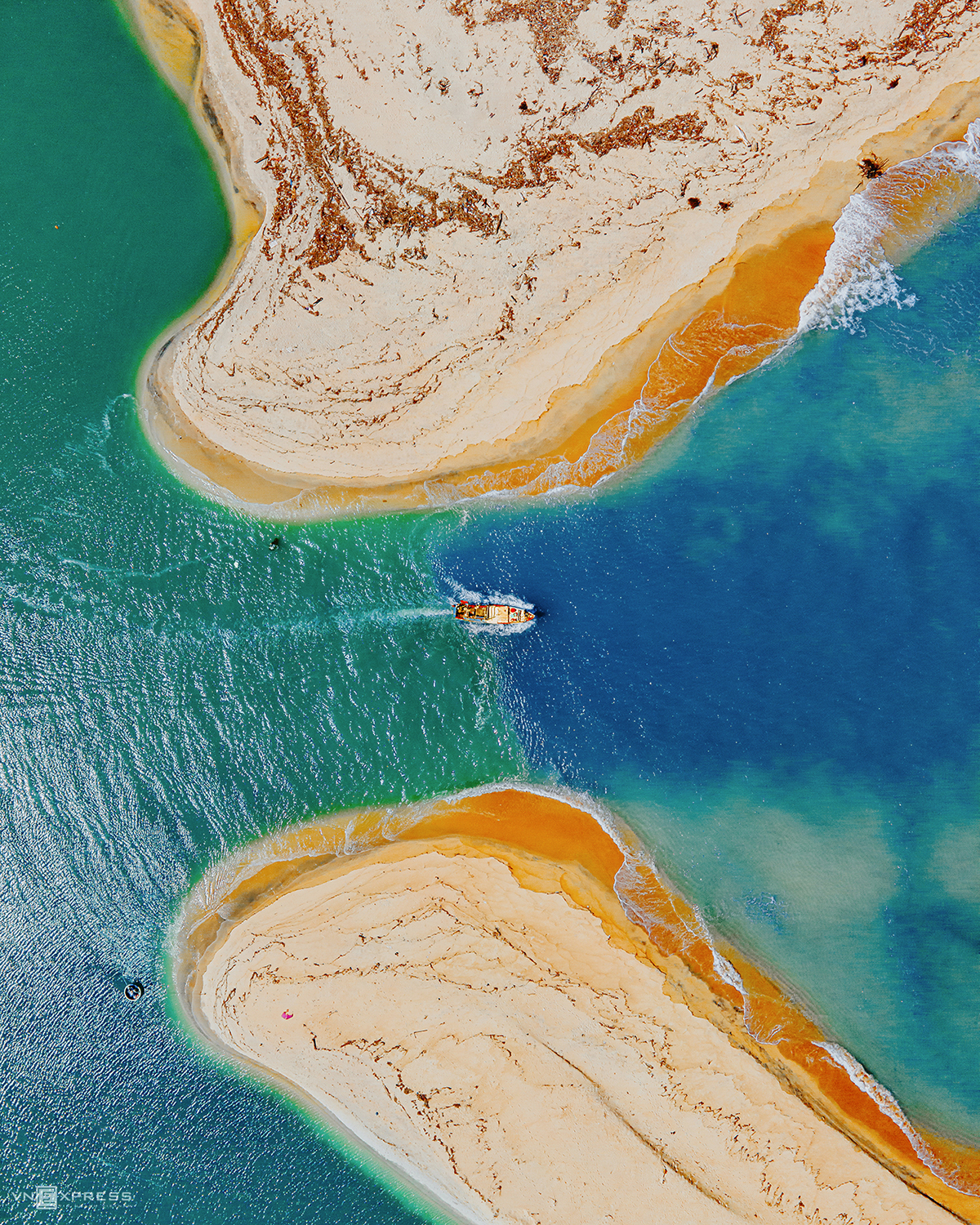 The young photographer shot the moment when the ship was travelling from river to sea, in the middle of two water flows. Co Luy Estuary (Quang Ngai) is the point where the river meets the sea so there are two different water colors right in this location. 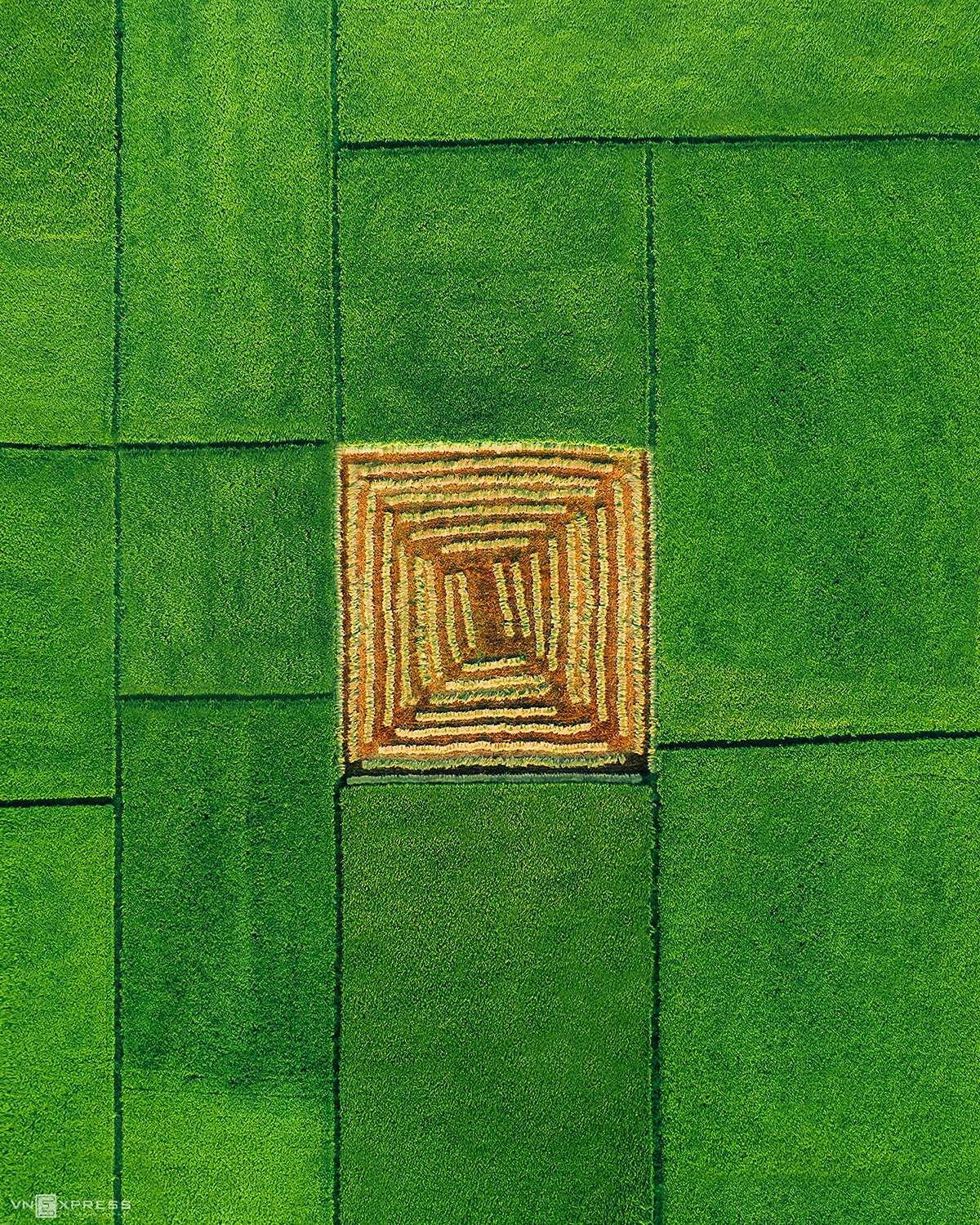 Vinh Linh (Quang Tri) is covered by the green color of squared rice fields, which look like a magical maze. According to Anh Tai, people get used to images with traditional views. From photos taken by drones with a bird’s-eye view, the guy observes things in a new perspective, thereby forming a habit of taking photos from above. 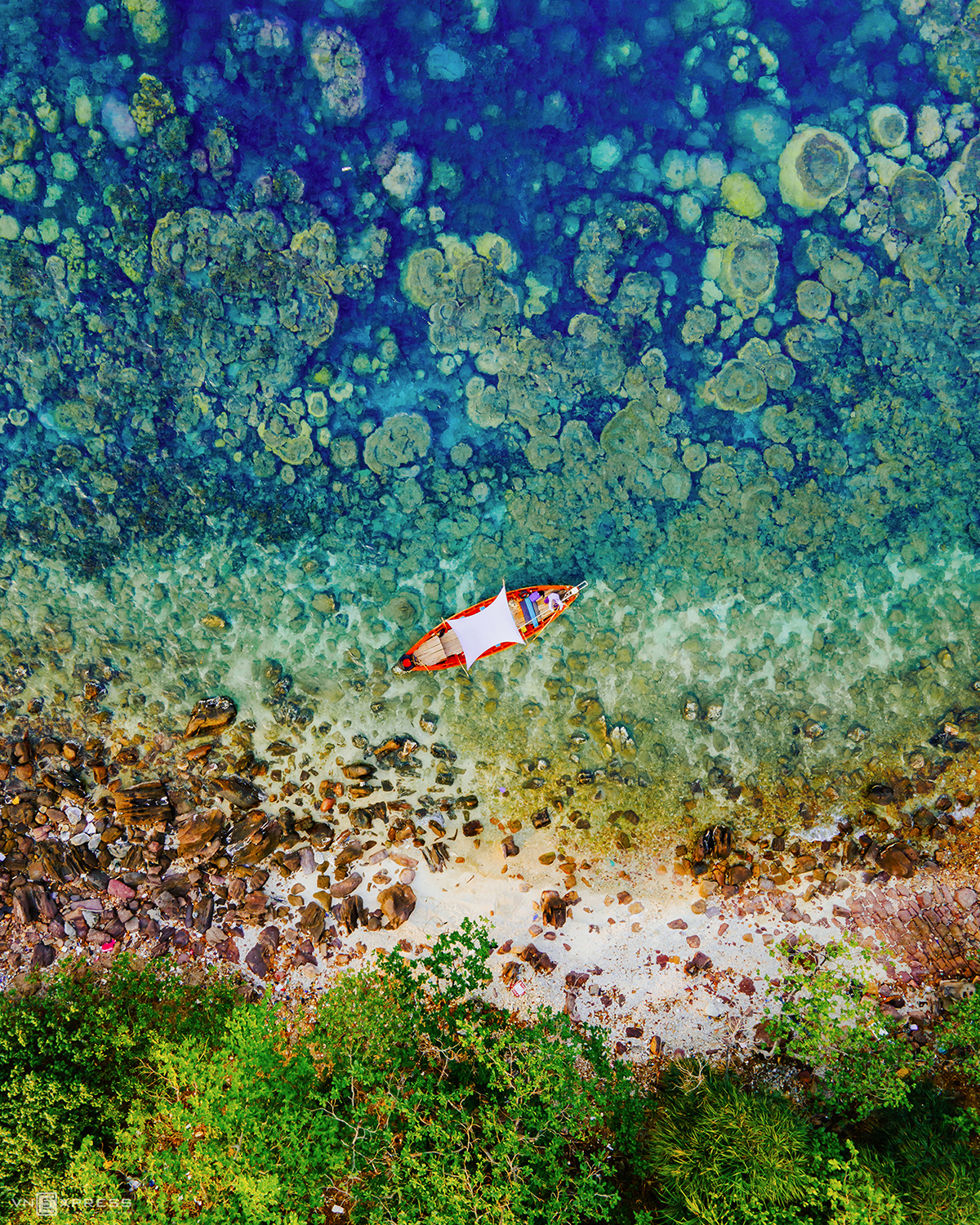 The distinctive geology of Hon Bang (Phu Quoc) can be clearly seen from above. Tai told that his photograph is one of the first ones taken by flycam on this island. 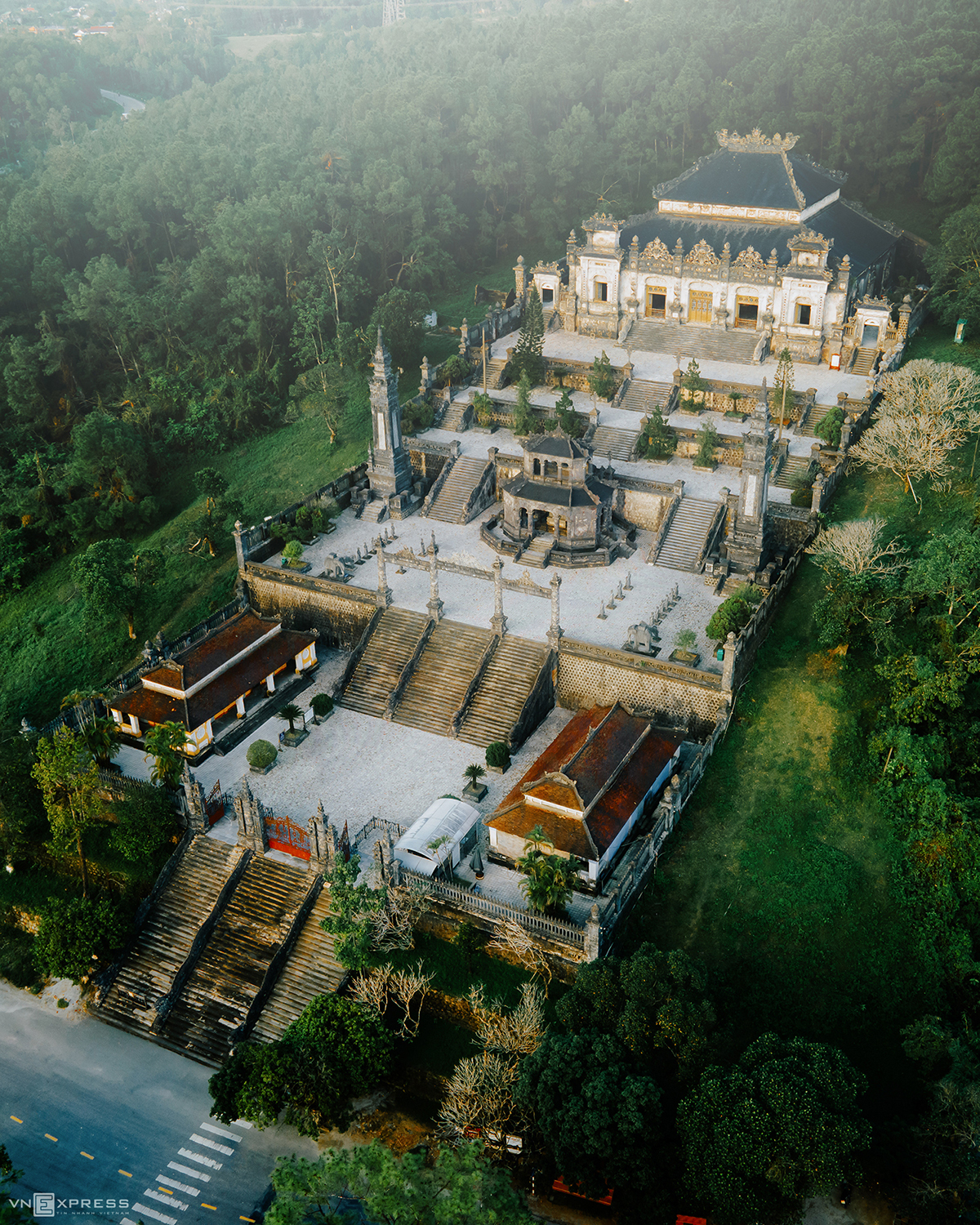 Khai Dinh’s Tomb (Hue) is solemn and mysterious in the mist. This place is associated with Anh Tai’s unforgettable memory when his drone was crashed and got stuck in a 4m high treetop. At that time, a local resident and a taxi driver gave him a hand to take the drone back. Fortunately, the drone only had minor scratches and there was no serious damage. 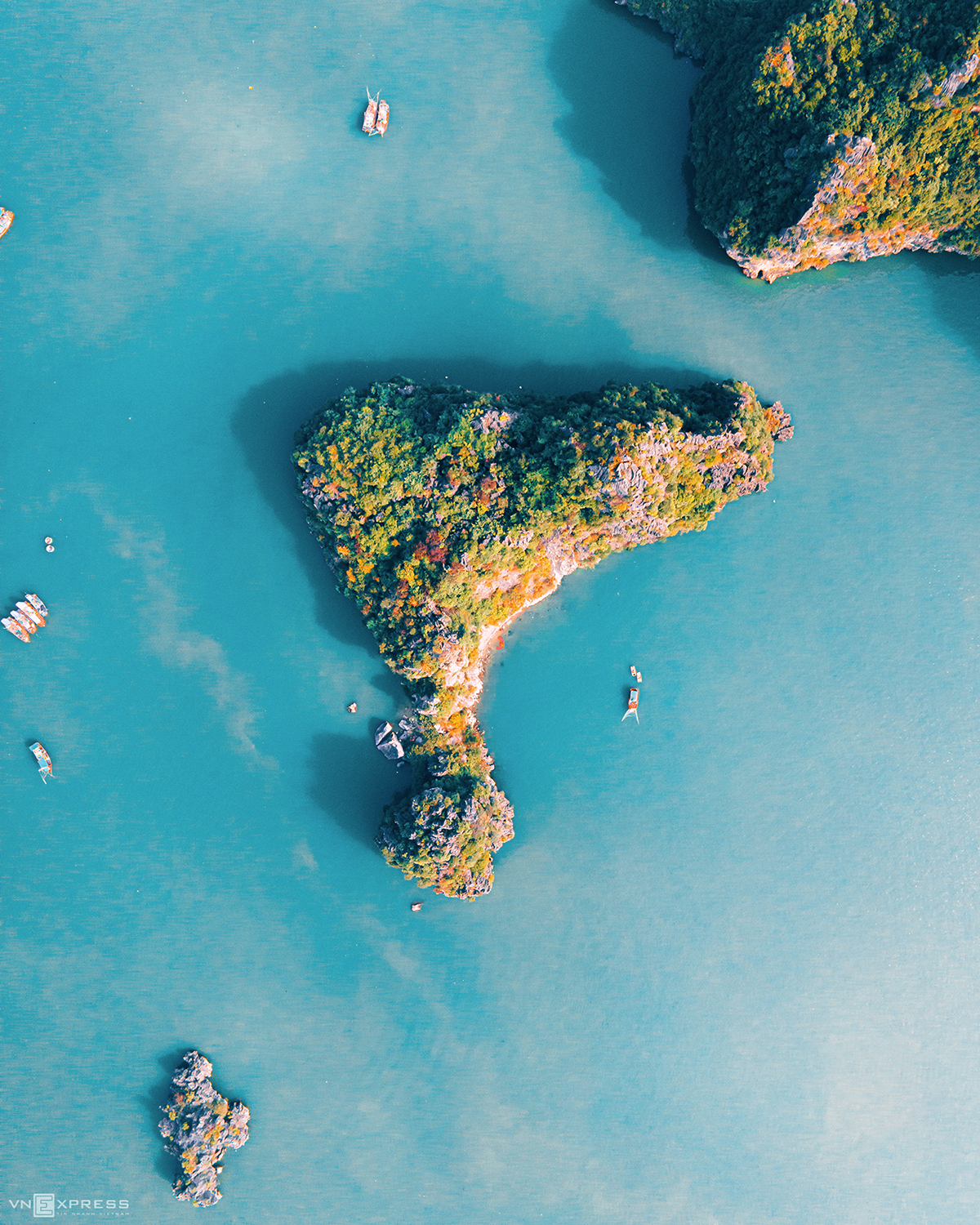 The young man humorously compared a corner of Halong Bay to a “chicken thigh” when seeing from above. 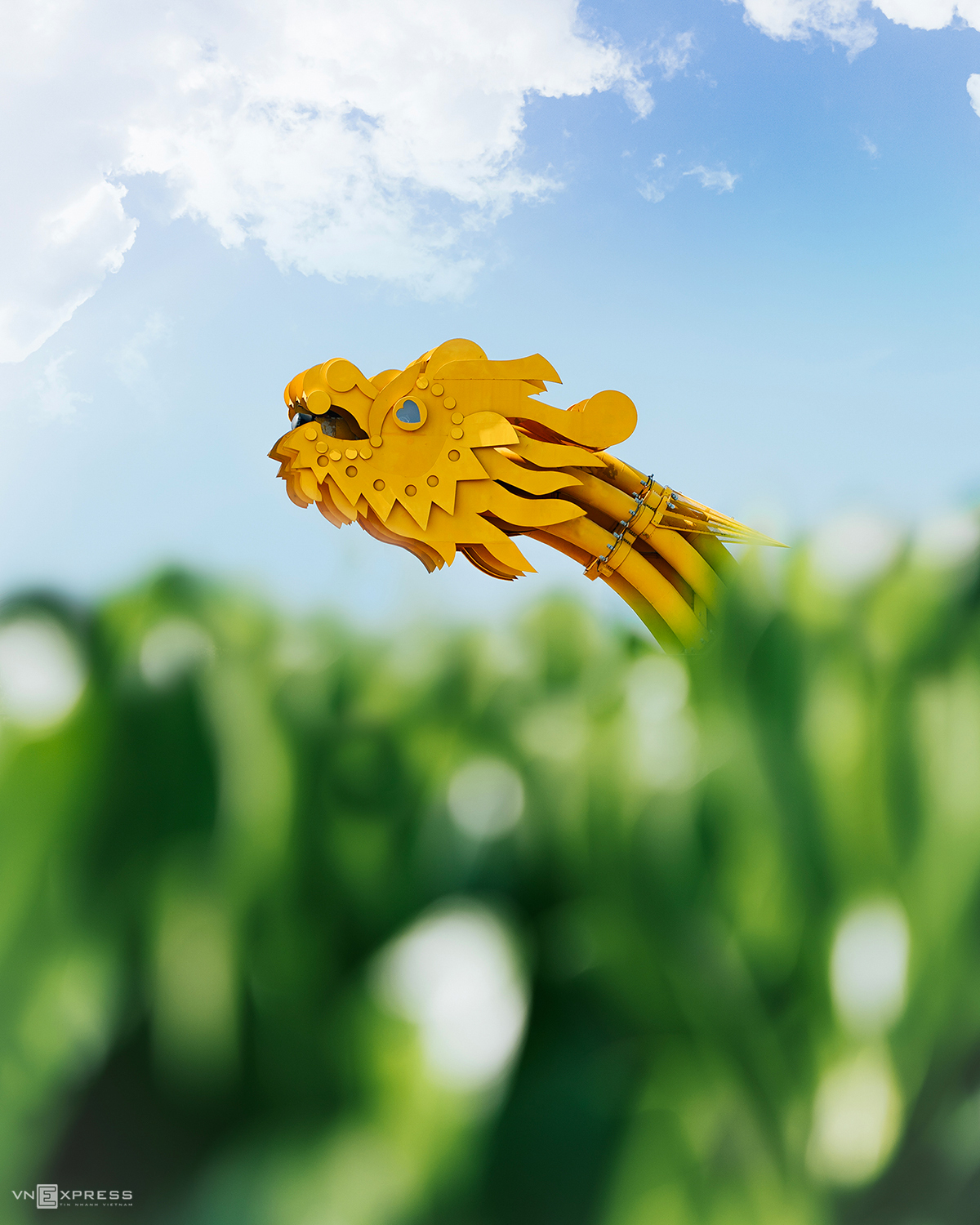 Besides photos taken from above, Anh Tai also takes pictures with a regular camera, but he chooses unique and new angles.

Tai said that, up to now, thanks to the photos shared on social networks, he has many new friends, including foreigners. What he did is not significant but he feels proud of himself when promoting Vietnam’s image to the world.