Quintessence of Tokin, shortly called Tonkin Show or “Tinh Hoa Bac Bo” in Vietnamese, is a must-see cultural spectacle, a truly amazing authentic experience when you visit Hanoi. The show offers you a chance to explore Vietnamese history and culture from a contemporary perspective, with hundreds of performers, an interactive water stage, and state-of-the-art performance technology. 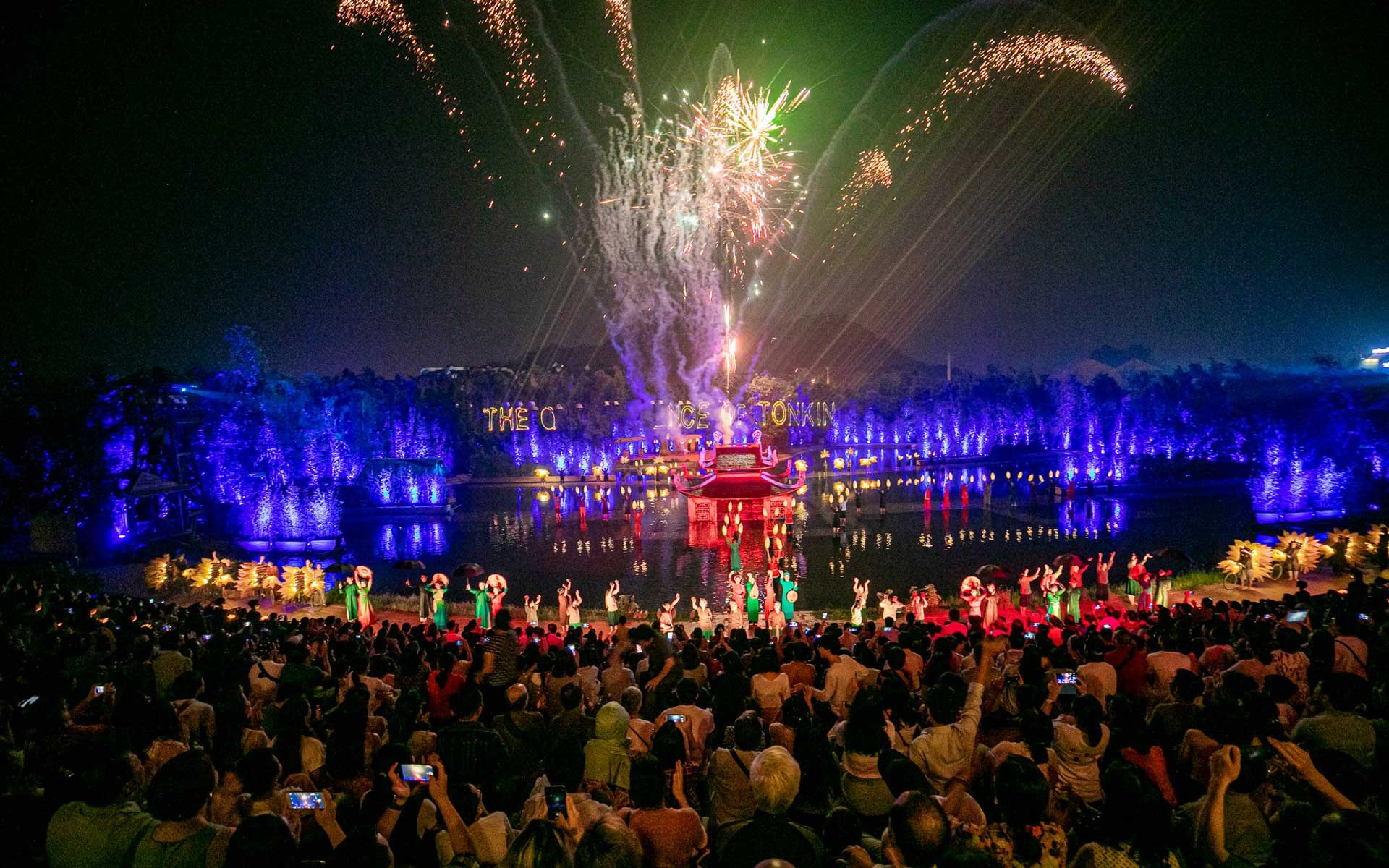 Born from an artistic vision to showcase the cultural highlights of northern Vietnam, the Quintessence of Tonkin blends skillful performers, a mesmerizing set, delightful water puppetry, a stunning light show, an evocative soundtrack and the Thay Mountain into a breathtaking open air spectacle that is both emotive and uplifting.

The Quintessence of Tonkin show draws inspiration from the spiritual history of the nearby Thay Pagoda, telling the story of the pagoda’s founding by venerable monk Tu Dao Hanh, and explaining the ancient union between religion and the monarchy. Years in the making and with hundreds of performers, an interactive stage, state-of-the-art technology, and a stunning setting, this live spectacle is an unmissable highlight of any trip to Hanoi.

This show is a delicate merge of 6 different aspects of the cultural Quintessence of Tonkin: Poetry, Buddhism, Nostalgia, Music & Painting, Joy & Festivities. It will bring you back to a pristine time, living in the old countryside of Vietnam, feeling the sacred atmosphere and the cultural crystallization of the land with thousands years of literature. 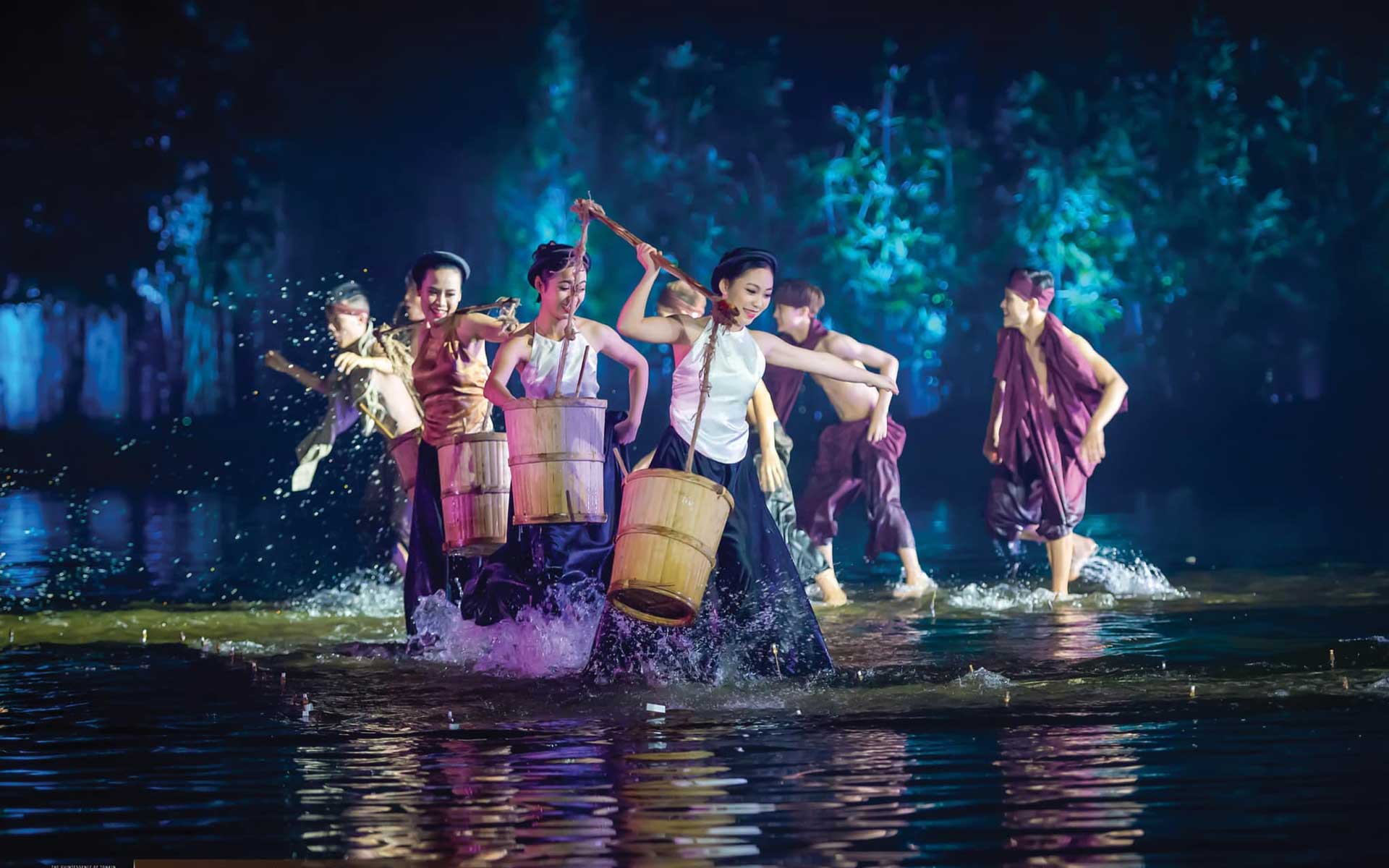 Inspired by the poetry of Nguyen Khuyen, the folk song Tat Nuoc Dau Dinh and the lullaby of Tonkin, the opening scene of The Quintessence of Tonkin spotlights traditional, rural life in Vietnam.
Local girls sit chatting and laughing near the lotus pond while local boys jest and joke around them, trying to get their attention. Nearby, villagers plant rice in the fields and tend their crops and livestock. Men fish in the river, pulling their silvery catches out of the water onto the banks. A mother gently sings a lullaby to her baby, the sound echoing pure and clear across the village… 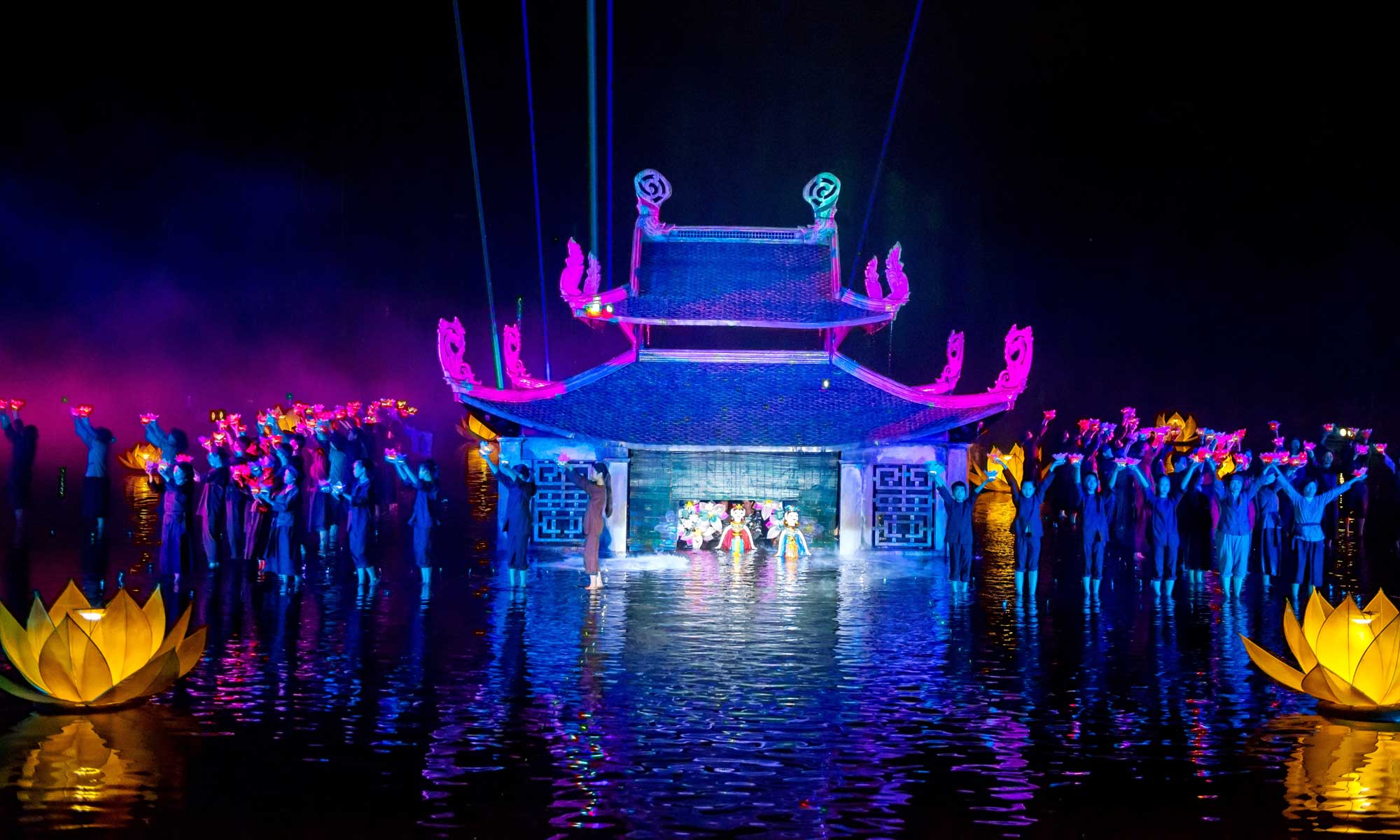 The next scene focuses on the story of Tu Dao Hanh, the venerable monk who founded the Thay Pagoda. Known as The Master, Tu Dao Hanh was also a medic and a mystic who healed the impoverished sick and asked for no payment in return. He taught the local residents of the village cultivation and also the art of water puppetry, which is now firmly entrenched in Vietnamese culture. In this scene, Tu Dao Hanh appears near the lotus garden, with graceful dragonflies gliding around him accompanied by laser lights. In the background plays the smooth harmony of the Quan Ho folk song, Se Chi Luon Kim. 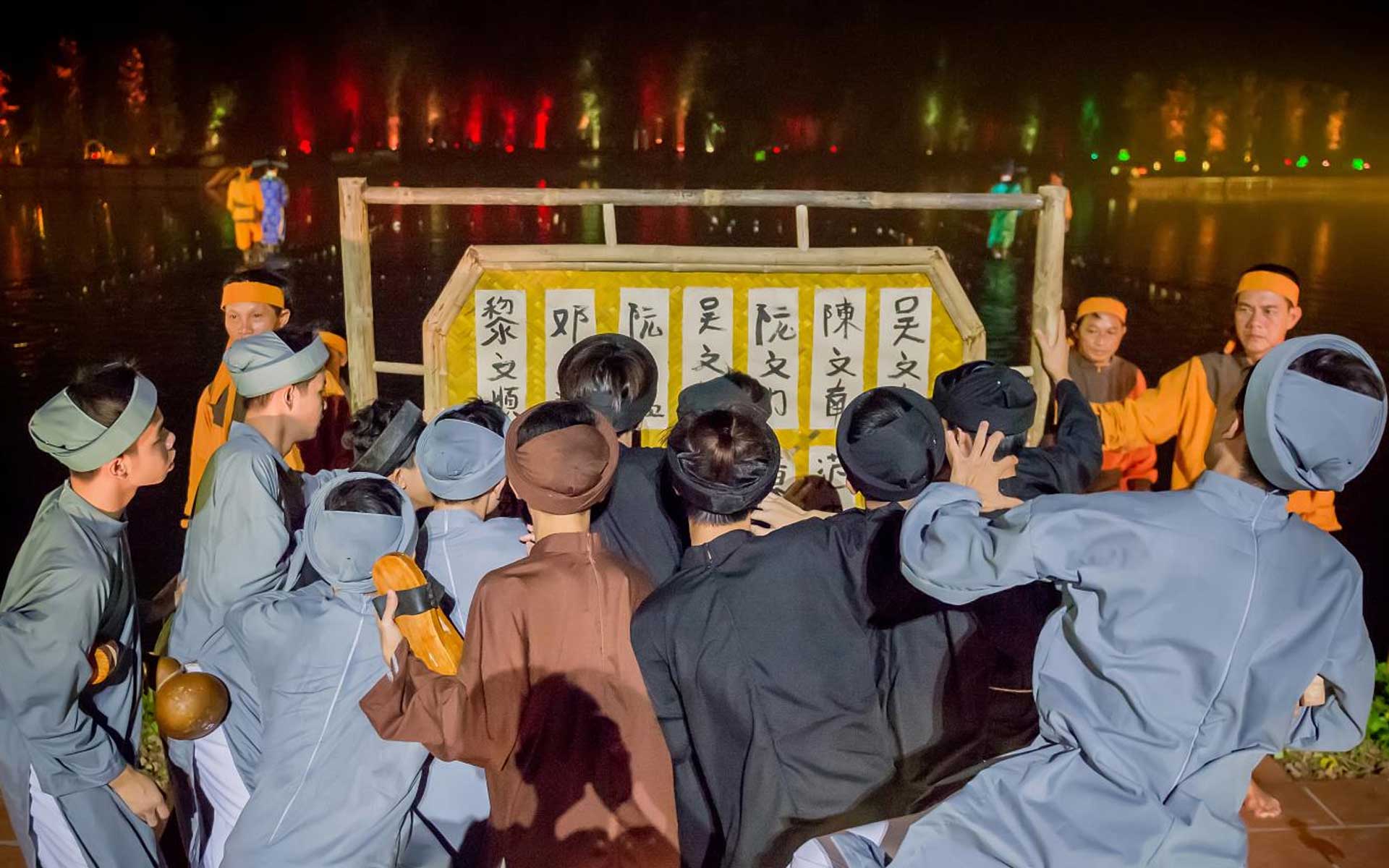 In this scene, candidates bring their cloth bags and bamboo tents to the Thang Long Citadel for their mandarin examination. Many sit for the exam and most fail. It is a difficult exam but for those who are successful, a promising future awaits. The Citadel is an integral part of the 4300m2 setting of lake and compound, and reflects the importance of learning and hard work to the Vietnamese. The music is rousing and the lighting vibrant to underscore the significance of history and tradition. 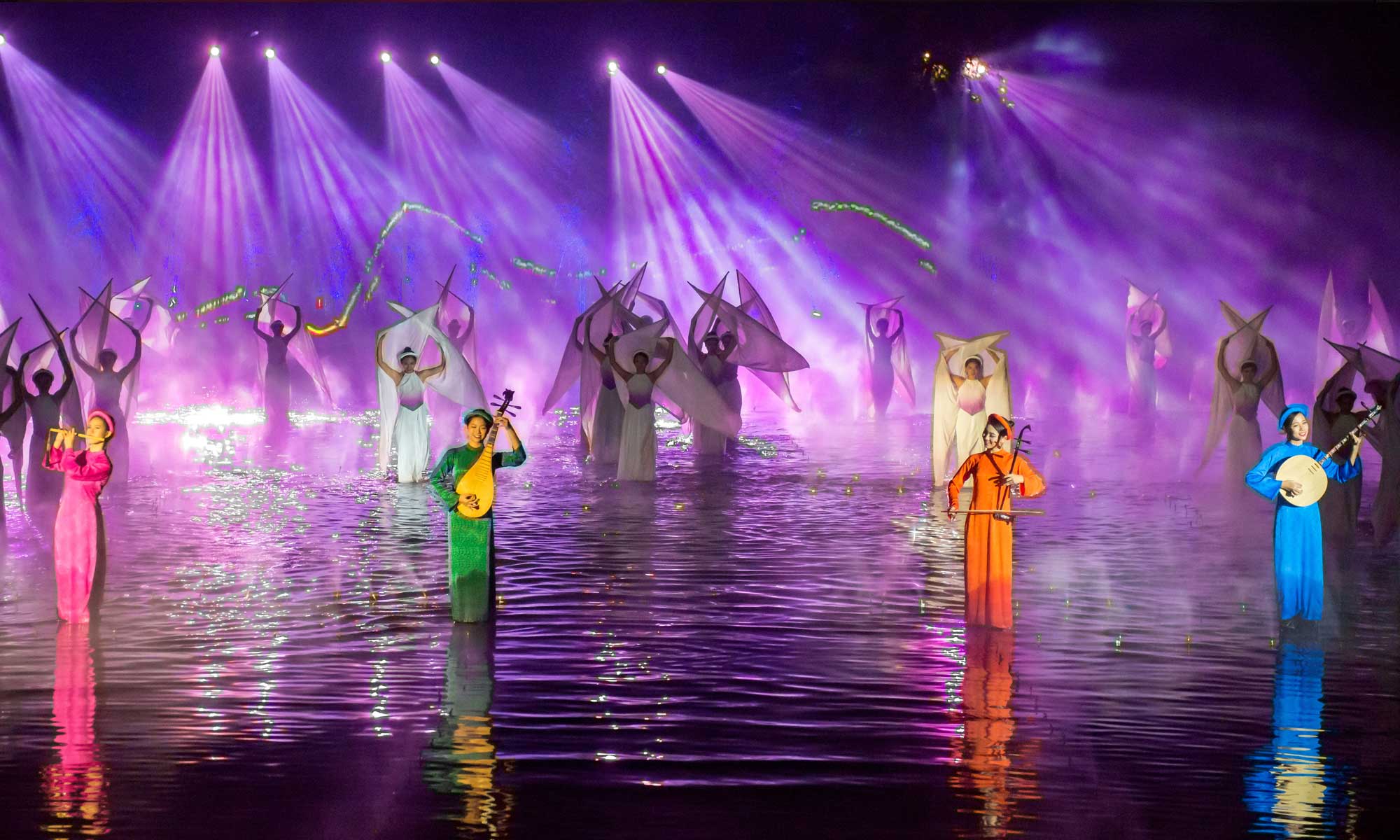 Drawing inspiration from the poetry of female artist Ho Xuan Huong, four screens depicting young women appear on the darkened surface of the lake. Utilizing 3-D mapping technology, the images on the water are also projected simultaneously onto the stage and are reminiscent of Tonkin folk paintings from the village. Each girl plays a different traditional Vietnamese musical instrument: flute, four-chord lute, two-chord fiddle and two-chord guitar. While the music wafts over spectators, beautiful fairies fly and dance, gracefully skimming the surface of the lake. 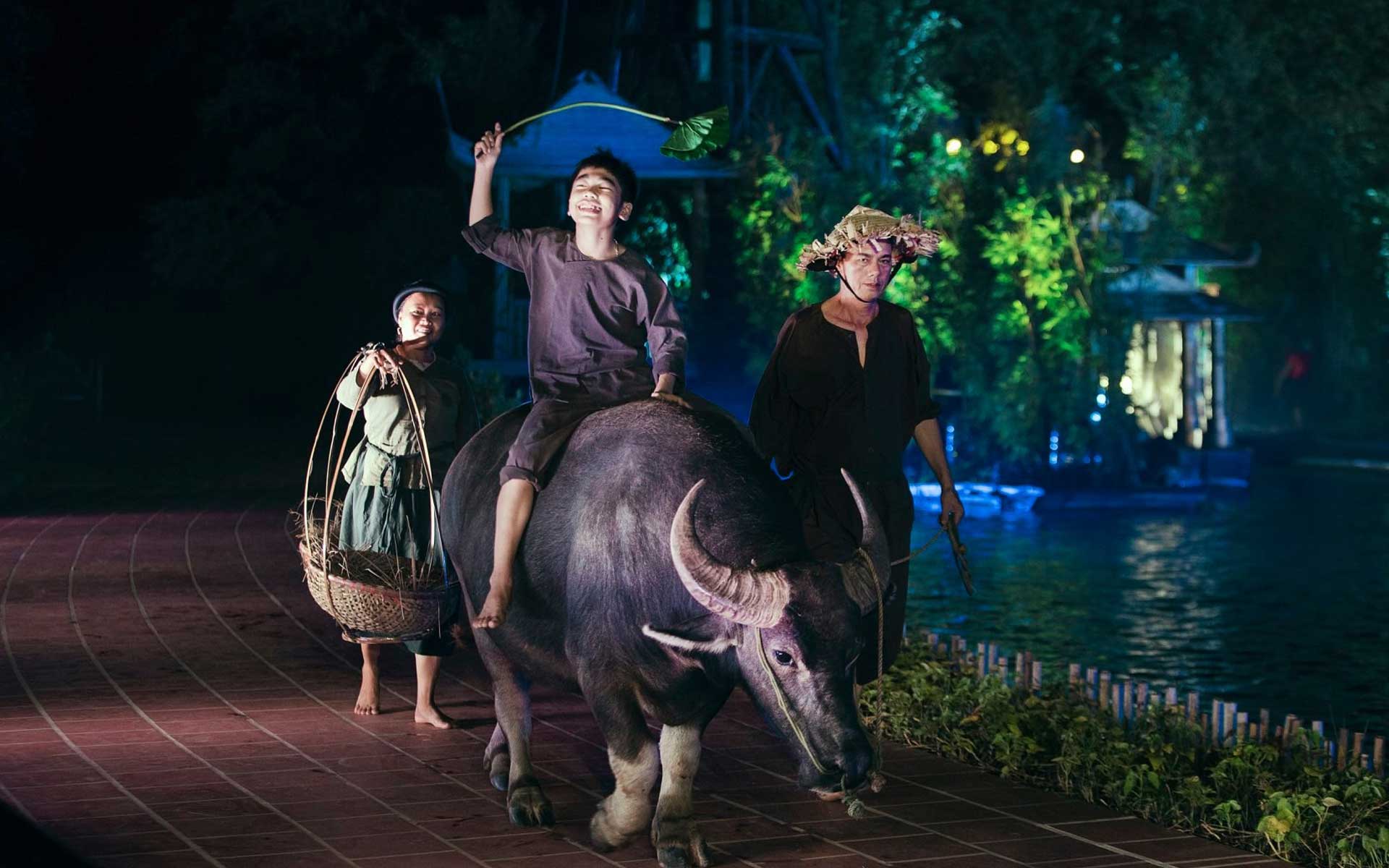 Religious beliefs and activities play an important role in the lives of villagers. The worship of the Third Holy Mother and Mother Goddess – saints who are in charge of the rice fields and help with successful farming and agriculture – give villagers a more comfortable life.

This scene depicts farmers working in the rice paddies – an image that is essentially Vietnam – and is closely associated with wet rice cultivation. The bumper crop is harvested by hard-working farmers, with laser lights and ancient folk songs accompanying the performers to demonstrate accomplishment. 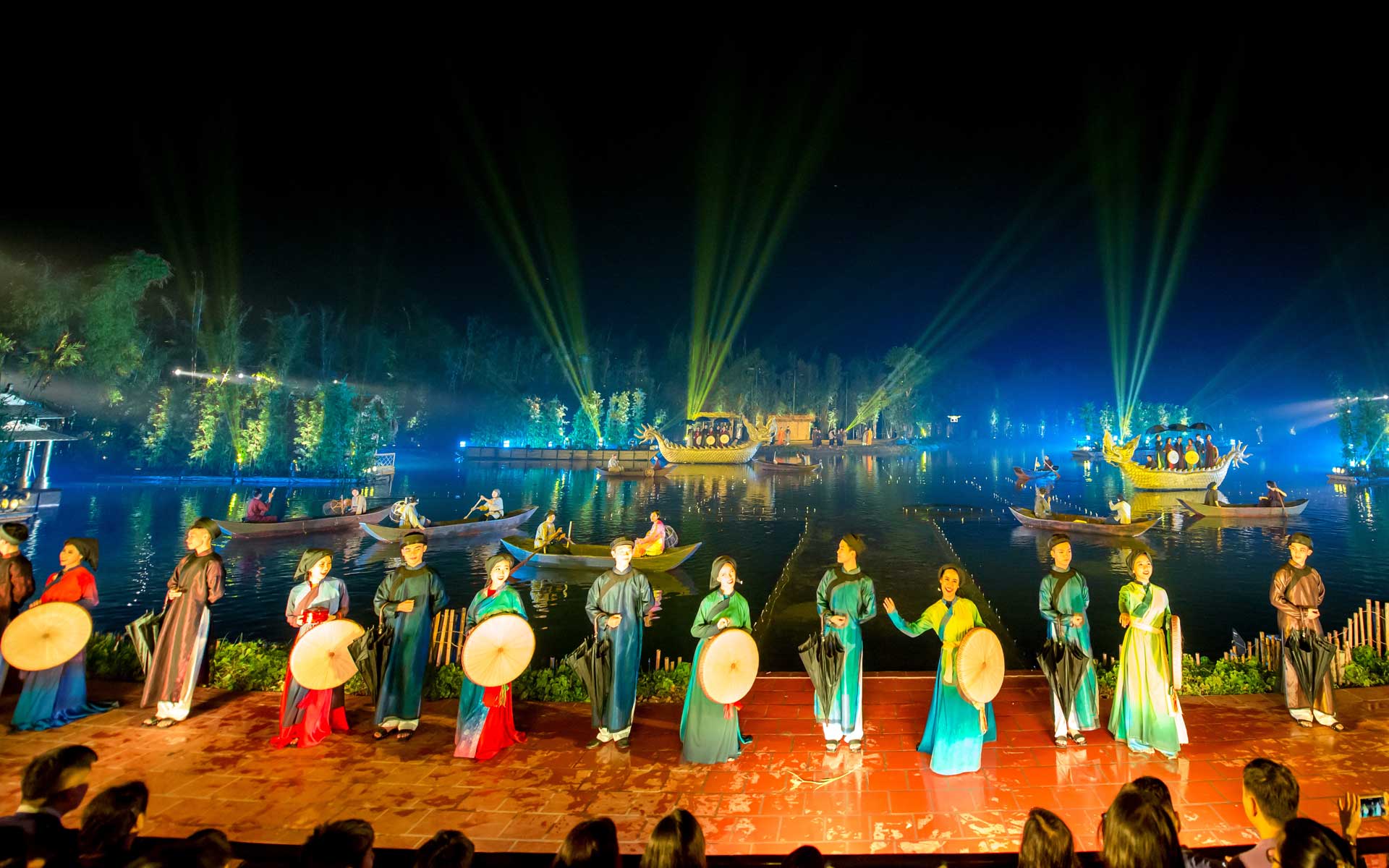 In the last scene, a festival with games and activities is the focus for the performers. From the “challenge and response” singing competition of Quan Ho folk songs to traditional games that are rarely seen today to the customs of Song Loan to the Song Dinh procession, all are vividly and convincingly portrayed. The finale has all the actors and actresses parade toward the Thay Mountain, which is lit with the image of a lotus flower that represents Tu Dao Hanh. “Nguoi Oi Nguoi O Dung Ve” is sung as a farewell to the audience from the performers.

Given its huge cast of 250 performers in this spectacle, The Quintessence of Tonkin employs a large number of local farmers, 200 farmer-turned actors. They bring their own ordinary tales and showcase their lives to the audiences through daily farming works such as pounding rice, netting and bailing water… Besides, a young team of talented students from the Hanoi College of Dance brings youth and energy to the stage. Together, the farmers and dance students make the show lively and vividly in a compelling visual performance.

The costumes are made of traditional patterns and raw materials – silk and cotton. They are all made onsite, and in order to faithfully illustrate the country’s history and culture, were produced under the supervision of a historian and multiple artisans. 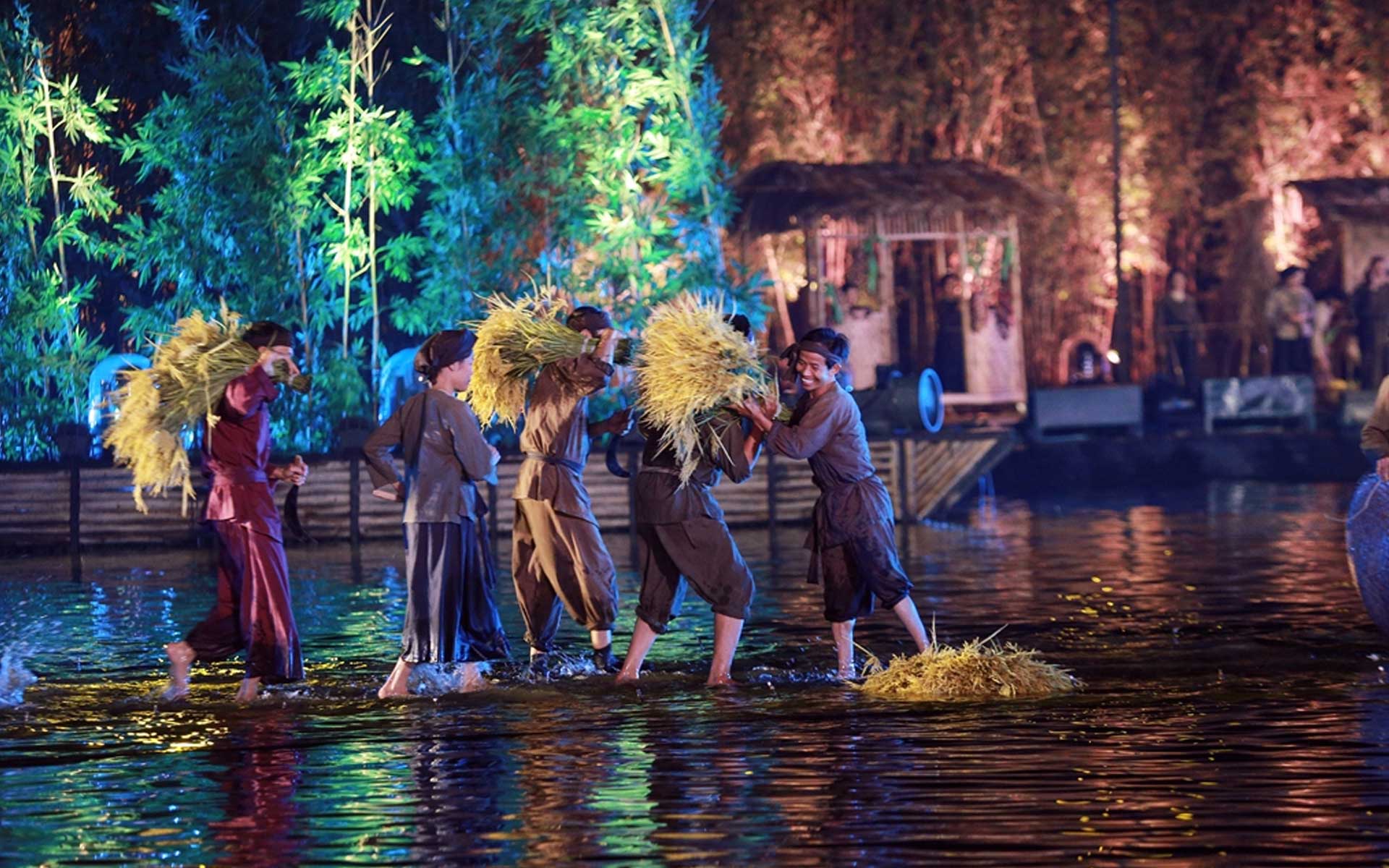 The Quintessence of Tonkin Show – A cultural experience in Hanoi

The theater itself is an engineering masterpiece. The natural lake was transformed into a stage, including a state-of-the-art hydrothermal system that raises the 15-ton Thuy Dinh Pagoda (pavilion on water) from under the water in just under a minute. Since the Thay Mountain composes the background of the scenery, a unique illumination system is installed to light up the hills, 1.5km away, using 40 lamps of 1500 watts!
The 4,300 square meters stage is large enough to accommodate all 250 performers at once and is permanently submerged under a thin layer of water. This allows for a unique theatrical displays and provides an unusual canvas for Vietnam’s more striking cultural treasures, such as water puppetry and dragon boat racing, to be creatively portrayed. 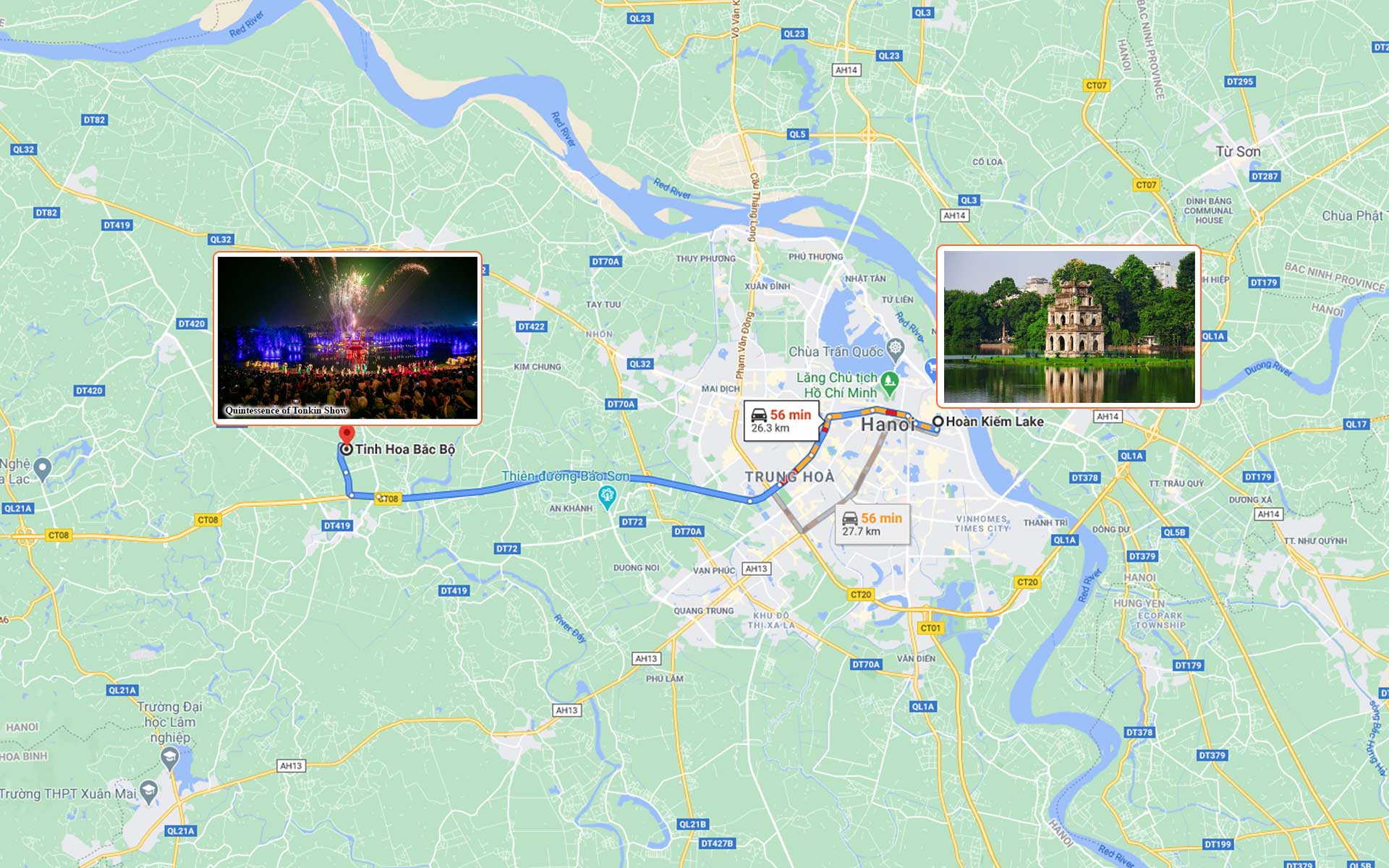