TET Trung Thu – Mid Autumn Festival is well known in Vietnam. This is special event for the children with lanterns and plenty of moon cakes. The festival is held in the 15th of the 8th month in lunar calendar on the fullest moon night of the year but the preparations begin couple weeks in advance. If you travel to Vietnam during this event, you should join this happiest night out with kids and local all over the country.

The Full Moon festival or Mid-Autumn Festival (Trung Thu Festival in Vietnamese) dates back to the Rice Civilization of the Red River delta, over 4,000 years ago. It is not only held to celebrate a successful harvest but also a chance for parents to make up for their children after spending much time on harvest season which was usually done by September (Mid-August in the Lunar calendar). In this special occasion, the parents often do something special with them by preparing many different foods – moon cakes, candies, fruits. It was held under the full moon. At this time, the moon’s orbit is at its lowest angle to the horizon, making the moon appear larger and brighter than at any other time of the year. People would gather to watch this auspicious event, and pray for the fullness and prosperity of life.

2. The celebration of Full Moon Festival 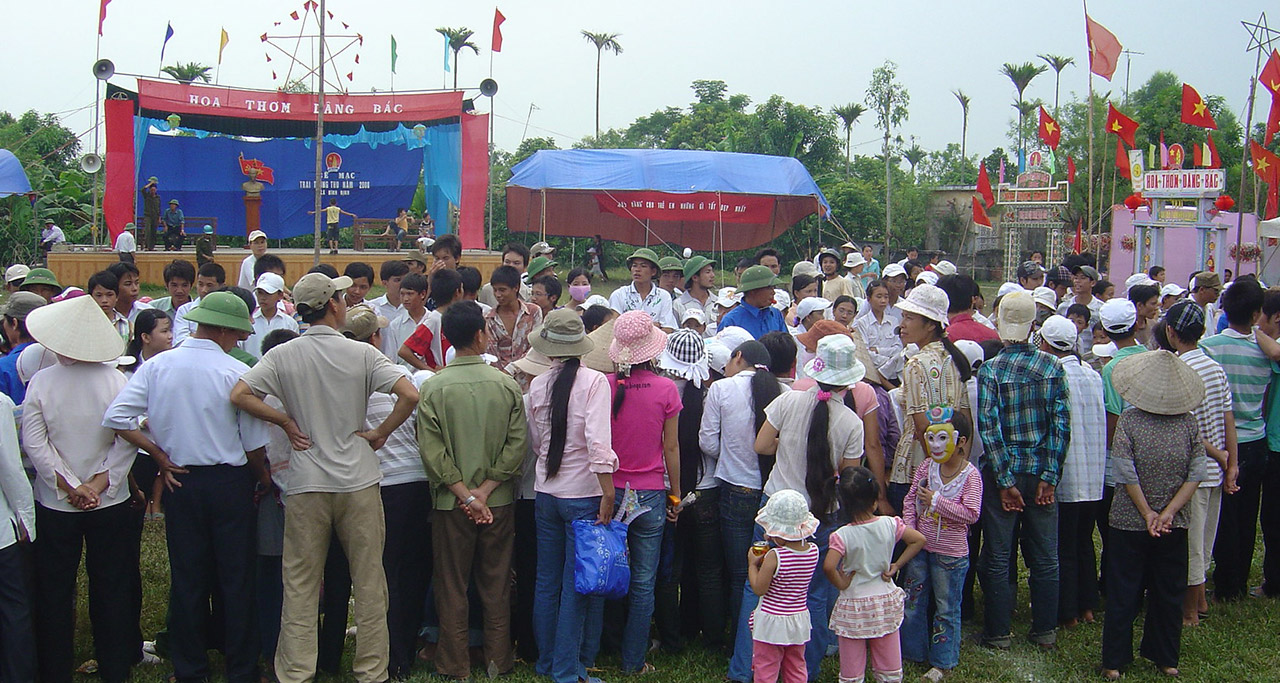 Couple weeks before Full Moon Festival, you will see and hear groups of lion dancers practicing on the streets. Mooncake shops start to sell on every other corner, pop-ups with elaborately decorated boxes filled with a variety of tasty cakes and fillings. All the streets team up with preparations of toys, lanterns and colorful masks in anticipation. The most popular Trung Thu lantern is a star made with red cellophane. Visitors will see these lanterns for sale on streets all over Vietnam in the days leading up to the festival. 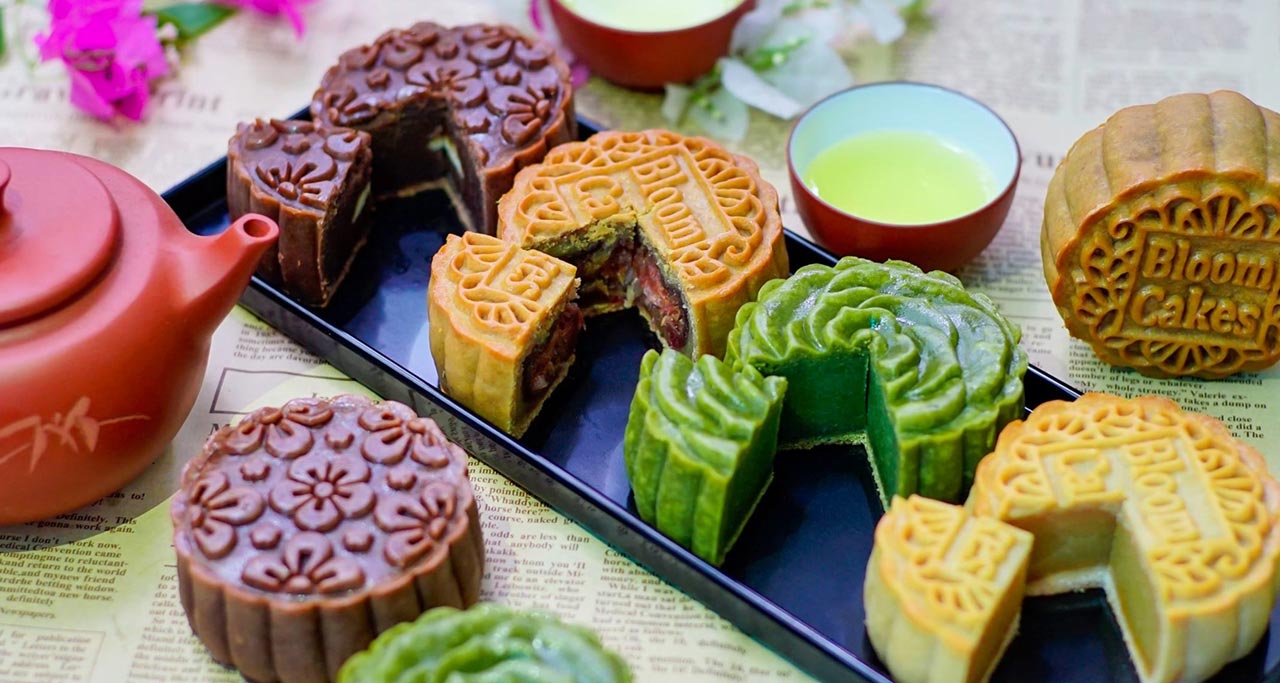 Mooncake is a must on Mid-Autumn Festival. In Vietnam, people usually make the two most common types of mooncake crusts which are call Banh Nuong” (“Baked Mooncake” which has an eye-catching golden brown on the crusts. And this is also a type that many people love) and “Banh Deo” (“Sticky Rice Mooncake” – a type of cake with white dough, smooth and very flexible as the name implies. Nowadays, the flavors as well as its colors have been more varied thanks to ingredients such as pineapple leaves, green tea powder, coffee powder, food coloring, etc.). The crust has 2 types that buyers can choose as their favorite but the filling is variety and tasty that may make them get lost in the savory land of mooncakes.

Besides, Vietnamese also make a platform with fruits and mooncakes. The fruits are decorated into animal shapes especially the little puppy from pomelo is indispensable. Such fruit decoration thing only happens on Mid-Autumn Festival that you do not want to miss if travelling at this period. 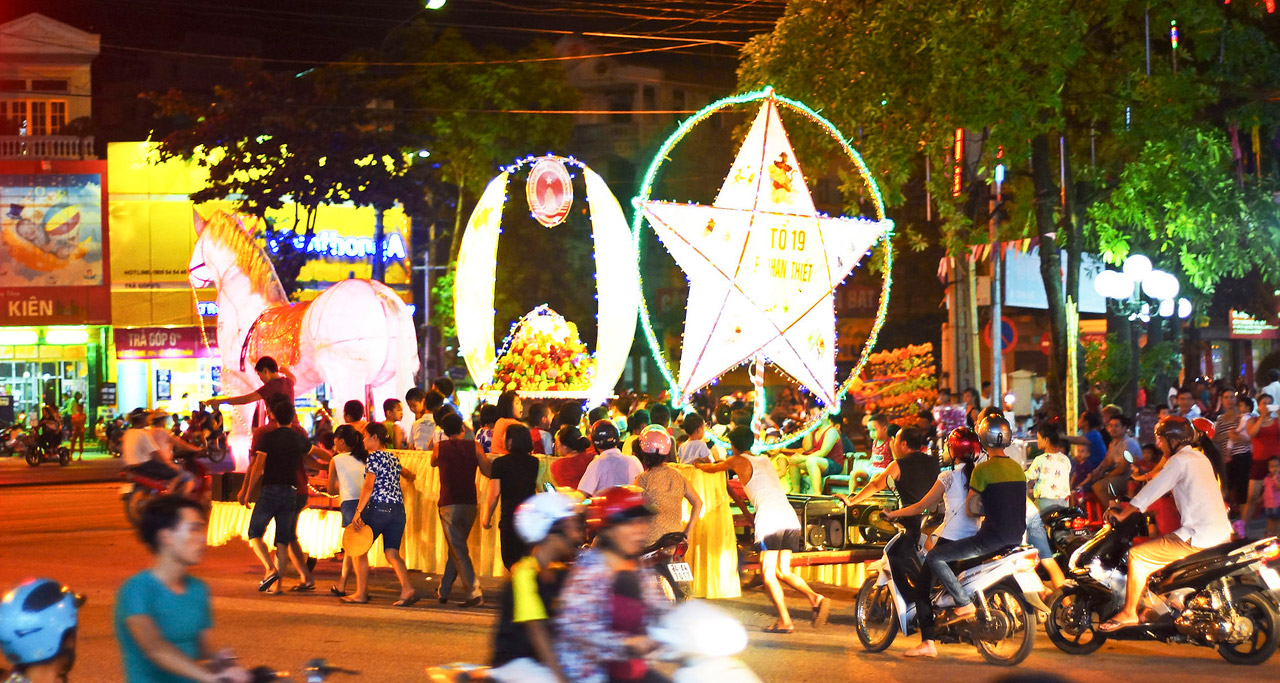 The other main tradition surrounding the holiday is lanterns. A legend told that a carp spirit once killed many people during the night of the Mid-Autumn Festival, so that no household dared to go outside during that night. Later, a wise man thought of an idea of making a carp-shaped lantern with a stick in its belly, and then advised people to walk at night holding a carp-shape lantern. The carp spirit was terrified by the light from these lanterns, and has not dared to go out to kill anyone during the Mid-Autumn Festival since then. Nowadays, on the day of the festival, children hold the lantern in various shapes and colors, but usually carp, star, moon or flower themed. 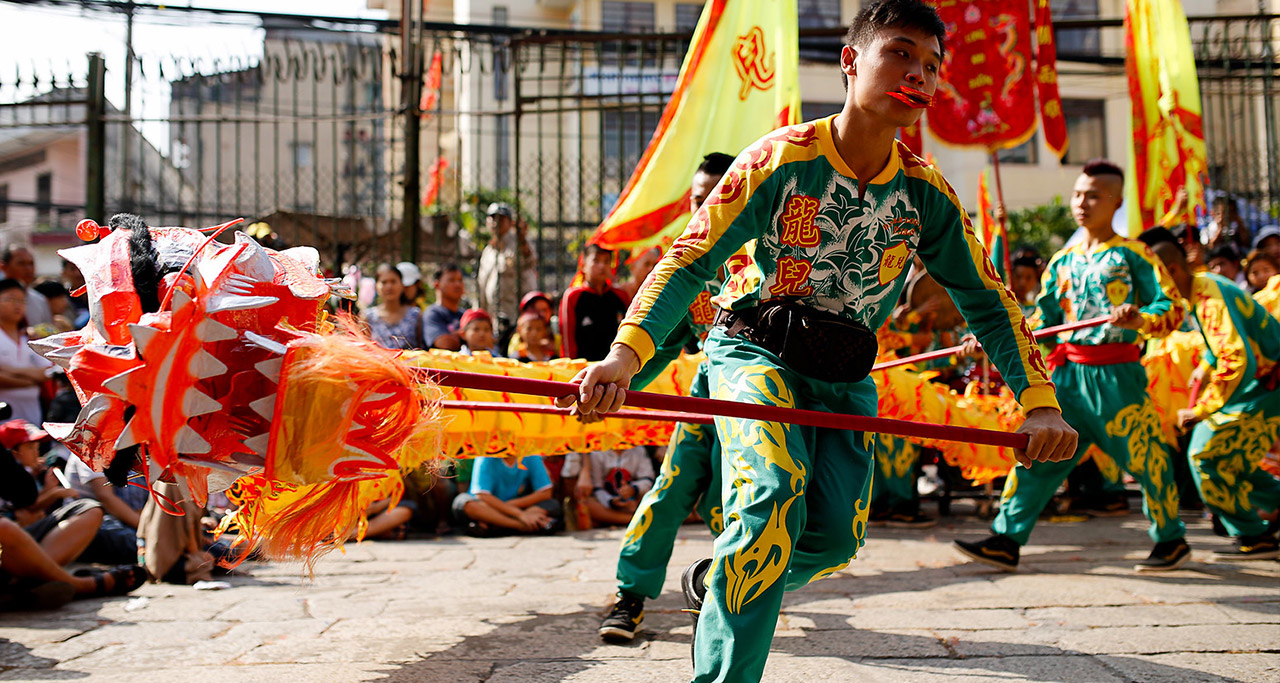 At night, groups of children parade through the streets, going from door to door and asking the owners for their permission to perform the lion dance. Then, the children will put on a show, which is believed to bring luck and fortune. Afterwards, the owners will give the children “lucky money” for their gratitude. The lion dances also take place on the streets. These lion dances are fascinating, and huge numbers of children, from little kids to teenagers, participate in this activity. As a result of having so many groups of children marching around, the streets of the cities echo with the sound of drums, as dozens of lion’s roam about. Lion and dragon dances are also common, as well as the burning of incense, which fills the streets with a beautiful smoky aroma.

If you are in Hanoi before the Mid-Autumn Festival, be sure to visit Hang Ma Street and Luong Van Can Street. These streets will be packed with a variety of toys and lanterns. Another Hanoi address to visit before the big night is 87 Ma May Street, where you can watch local artisans preparing festival crafts. On the eve of Mid-autumn, the Youth Theatre on Ngo Thi Nham Street and the Children’s Palace on Ly Thai To Street host children’s musical shows. 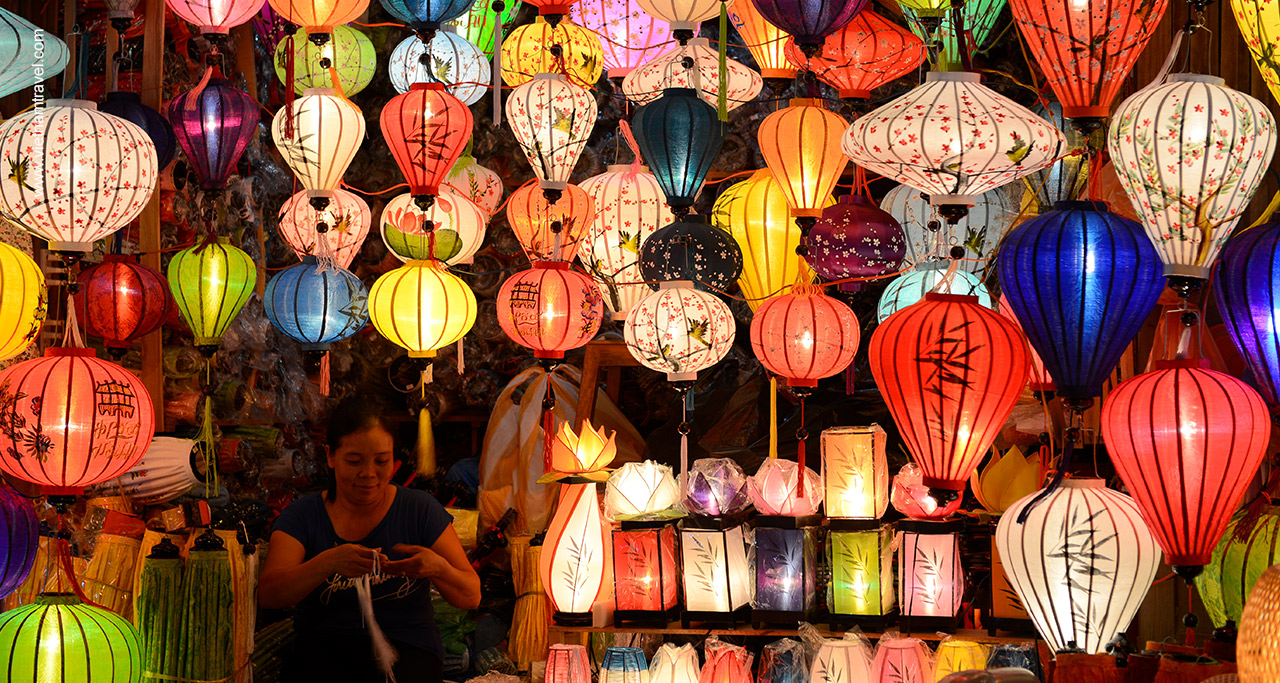 If Hoi An Ancient Town is famous for its full moon celebrations year-round, the Mid-Autumn Festival must be very sparkling. Mid-Autumn Festival at Hoi An will take place in 4 days from 12 to 15 August Lunar Calendar every year with lots of interesting activities. On these days, the stalls sold in Hoi An from 5pm have been filled with the atmosphere of the Mid-Autumn Festival, so every house has one or many lanterns on the doorstep. Dancers and their drumming troupes perform on the streets and in front of pagodas. Another thing not to be missed is admiring the sparkling candle lights floating gently on the Hoai River in the heart of Hoi An, giving visitors a peaceful feeling, all sorrow and the pressure of bustling urban places are disappeared. 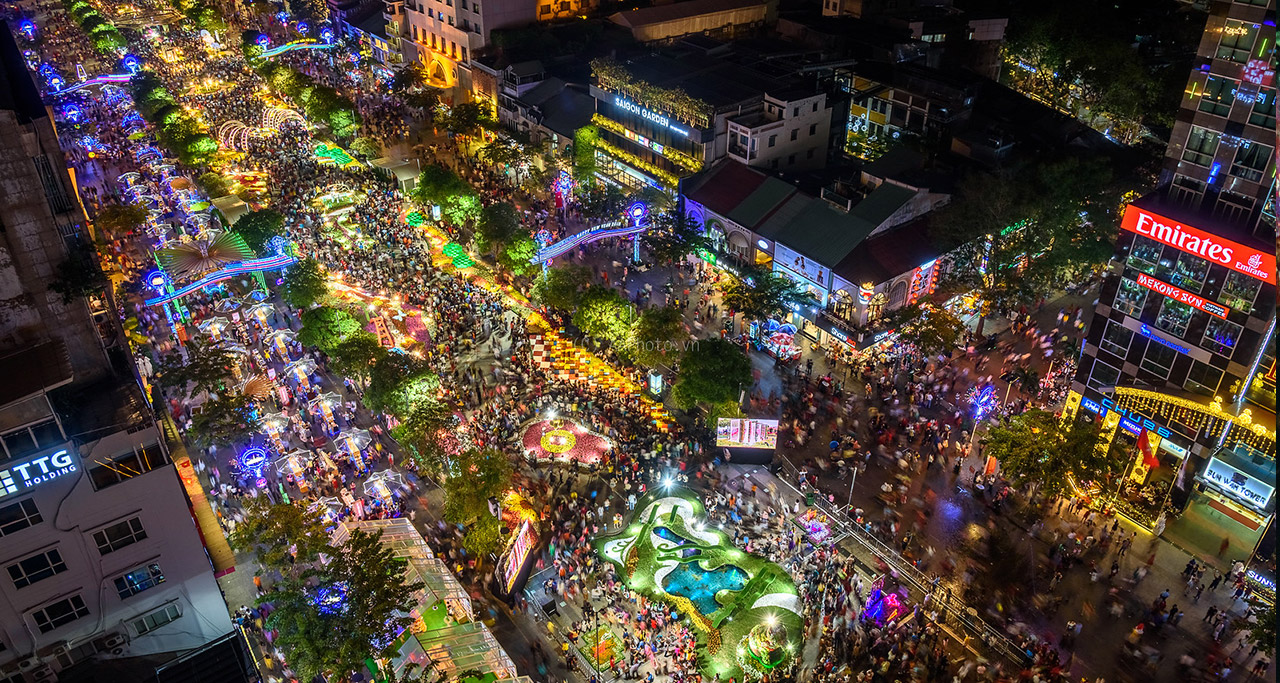 The area of Cho Lon Market in Ho Chi Minh City is home to exciting Mid-autumn festivities. Travelers should stop by Luong Nu Hoc Street, famous for its lanterns, masks and lion heads overflowing on the sidewalks. This is the perfect spot to pick up a souvenir lion head. Moreover, if you are interested at the lion head mask The shop at 109 Triệu Quang Phục Street has been selling it to the city’s best dancers for five decades.

Not only locals, but also foreign tourists are warmly welcomed to join in this special festival. Surely, you will have much fun when taking part in the crowds, seeing children carrying the lanterns, eating mooncakes and receiving gifts of celebration during the Mid-Autumn Festival. The Full Moon festival is coming soon, do not hesitate to award yourself some days experiencing the city tour with Vietnam Travel to attend one of the most sparking festival of the year in Vietnam. 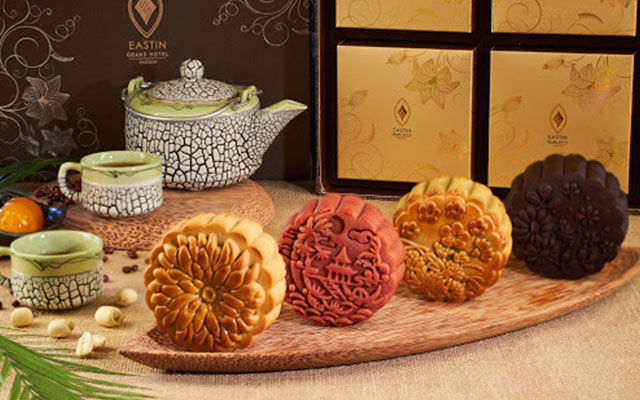 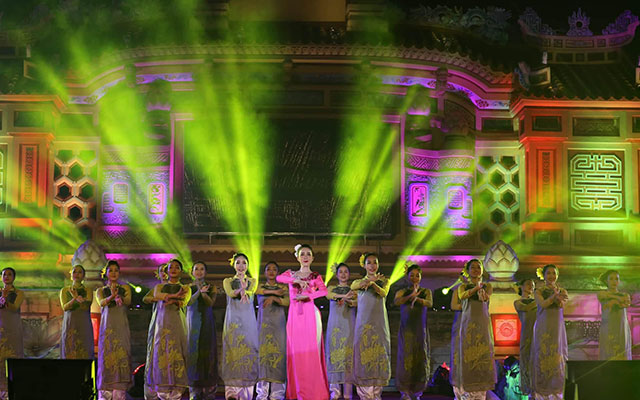