Jayavarman is the father of Heritage Line’s unique ship collection and named after the most renowned Cambodian monarch, King Jayavarman VII, who was known for his tranquility and love for artistic creations. He created some of the most famous temples of the lost Angkorian civilization.

Jayavarman serves as a floating art gallery with fine objects d’art exposed all over the vessel. Lavish woodcarvings, Khmer bas-reliefs, and delicate lacquer paintings showcase skillful local artisanry and traditions. All are paired with a charismatic French-colonial design theme and pleasant Art-Deco accents. The cruiser features 27 rooms, individually themed and elegantly decorated, evoking memories of a glorious heritage. Jayavarman is a home that melts savoir-vivre with enjoyable lifestyle luxury. The warm and embracing atmosphere invites to feel at home from the first step aboard.

The ship plies the lower Mekong between Vietnam & Cambodia on various itineraries.

Allow us to paint – in your mind’s eye – a picture of timeless colonial romance on board The Jayavarman while cruising along the Mekong River. From your cabin, you step out onto your private balcony, sipping a cocktail made of local fruits you just dis-covered in an orchard during a Mekong Delta excursion. As the sun gently sets, the countryside casts its golden silhouette on the river. You realize that you’ve never been in a place this peaceful before and enjoy the tranquility which is only occasionally punctuated by a child’s raucous laughter ringing from a nearby river village. Darkness descends. Friendly waiters serve you at your private table who, by now, have become your friends. They may be a tad shy but proud to put on display their traditional attire. After a comfy night’s sleep, Tai Chi lessons await on the sun deck, ready to connect you to the energy that is so plentiful in this spiritual corner of the world.

The mighty Mekong – a mysterious body of water flowing through six countries in Asia. Giving love and life to millions, it received its fame by the legendary God King of ancient Cambodia, King Jayavarman VII, who linked hands with the waters of the Mekong to build the magnificent Angkor civilization.

This classic 7-Night Mekong River cruise named “The Lost Civilisation” combines places rarely visited with fantastic historical heritage sites. If offers a complete fluvial discovery of Vietnam and Cambodia along the Mekong with a combination of experiences one never will forget.

High water period is approx. from mid-August to mid-November. 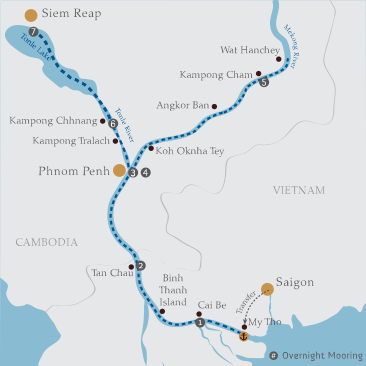 GET A CRUISE QUOTE 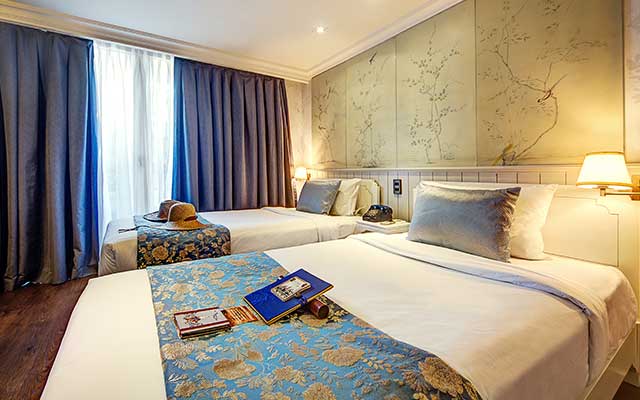 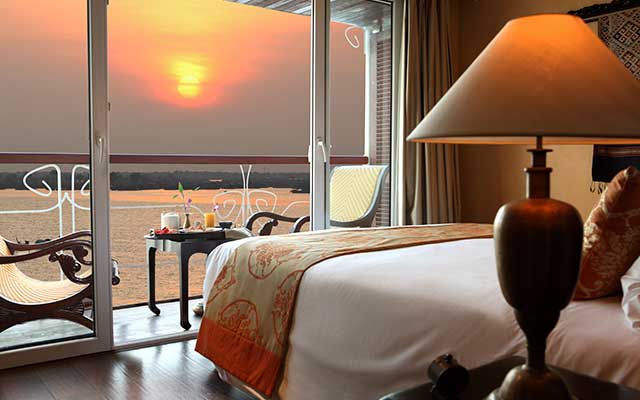 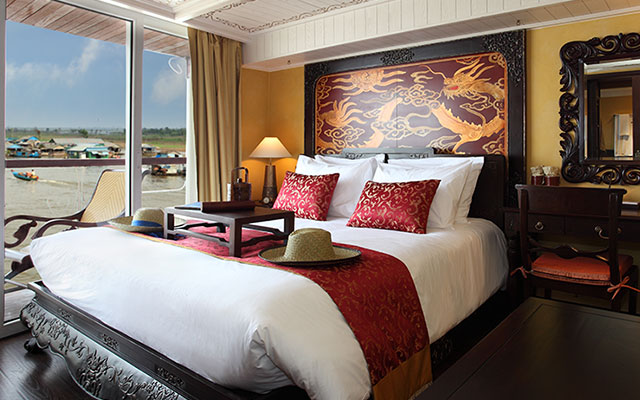 • Crew and guide gratuities.
• Visa fees.
• Private transfers (book separately).
• Personal expenses.
• Other beverages than those stated under inclusion.
• Medical services.
• Spa treatments.
• Port and anchorage fees.
• All other services or items not listed under inclusions.